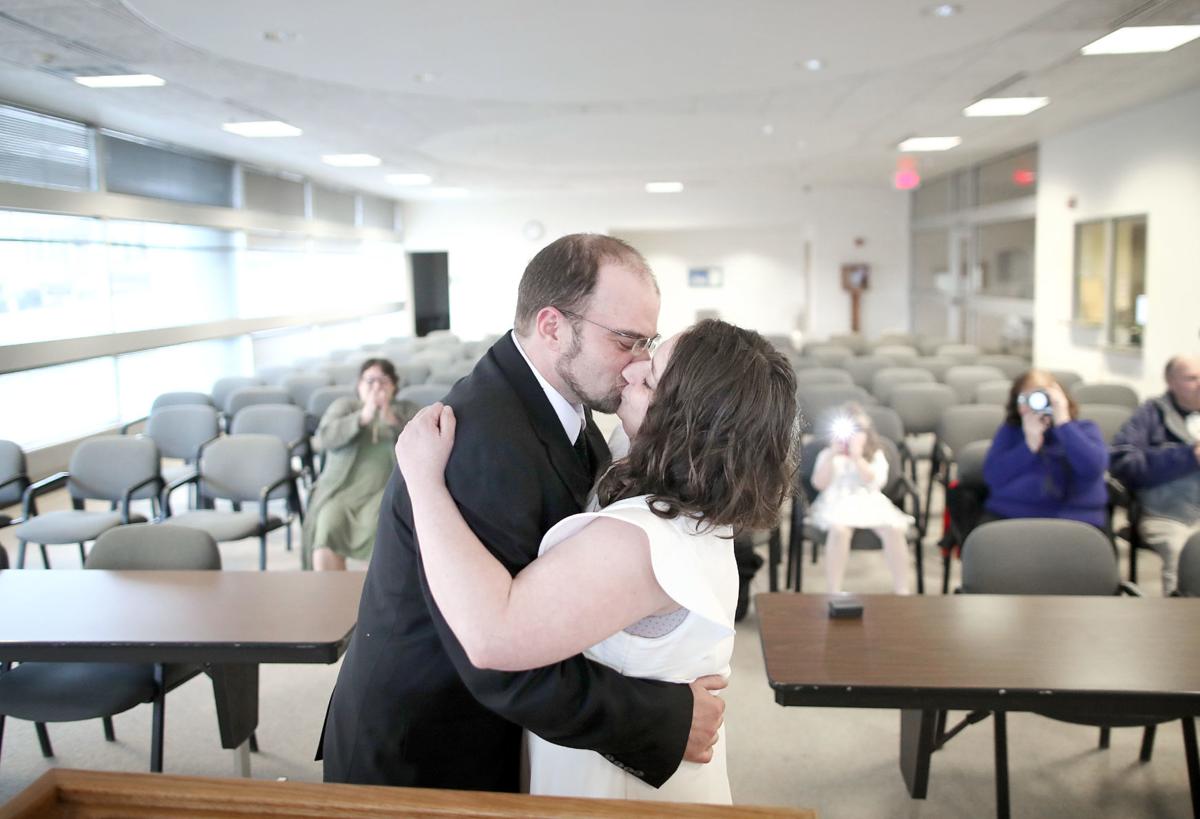 Kevin and Carla Vilbrandt, formerly Carla Fish, kiss as they are married in the Rock County Courthouse in Janesville on Wednesday. The wedding party was within the 10-person limit mandated by Gov. Tony Evers. 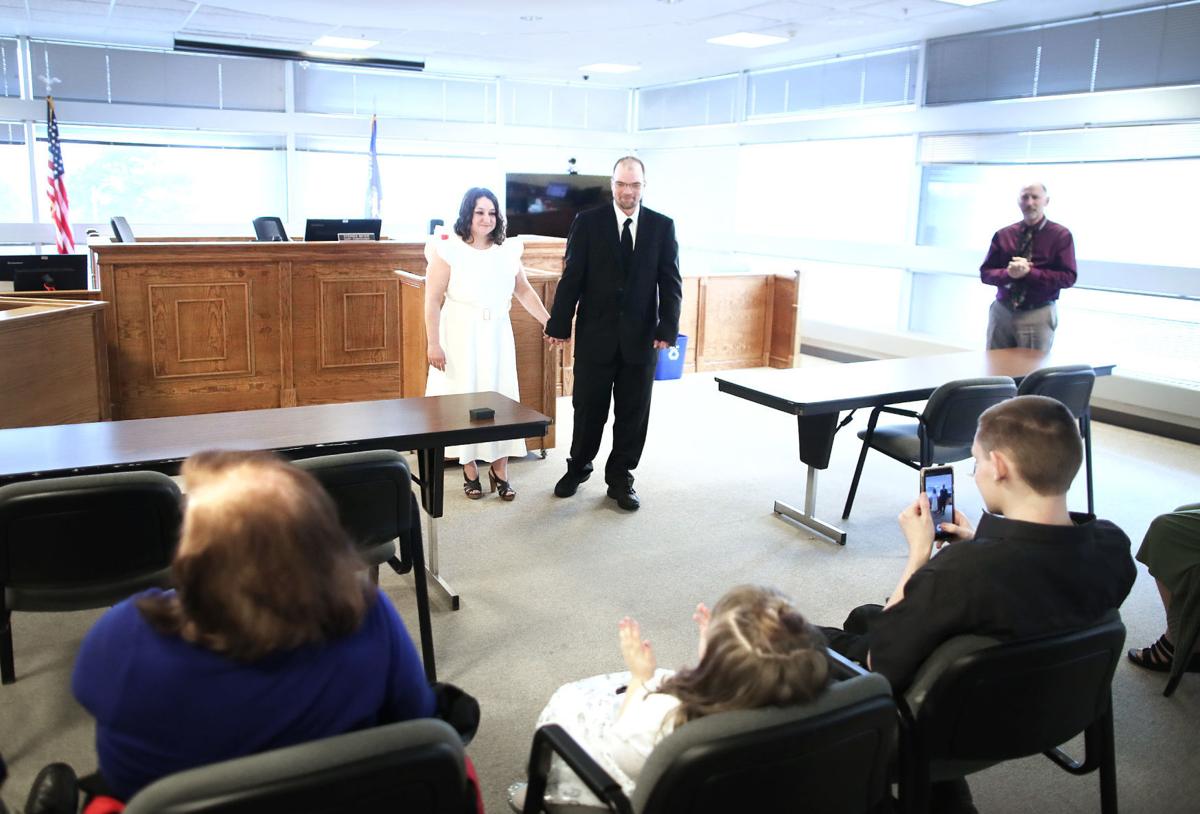 Kevin and Carla Vilbrandt, formerly Carla Fish, hold hands in front of their families after they were married in the Rock County Courthouse in Janesville on Wednesday. 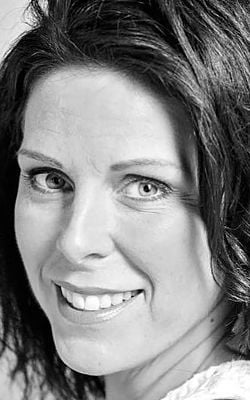 Carla Fish and Kevin Vilbrandt had to make sure they had 10 or fewer people in their wedding party, including themselves, when they got married at the Rock County Courthouse this week.

“We were freaking out until they called us yesterday and told us we could come,” Fish said shortly before the ceremony.

As of this writing, Court Commissioner Stephen Meyer is still conducting weddings at the courthouse, as he has done for years. But he will be busier in the weeks ahead.

Rock County Clerk Lisa Tollefson said in the past, her office handled one or two wedding licenses a day. Now, she’s handling four or five, and two or three of those request courthouse weddings.

Many couples say they plan to get the marriage out of the way now but are postponing their celebrations until after the ban on most gatherings is lifted, Tollefson said.

Gov. Tony Evers banned all gatherings of more than 50 people Monday and then changed that to no more than 10 people Tuesday.

Meanwhile, wedding planners and those who supply cakes, dresses, flowers, deejays and photographers are also feeling the effects of the gatherings ban.

Heidi Rossiter, a floral designer and wedding planner who runs Mod Bloom in Janesville, said she has heard from people who are upset, if not freaking out.

Rossiter said some people think about their perfect wedding all their lives. Some want spring weddings. Some dream of all-peony weddings with those springtime flowers’ intoxicating fragrance.

Rossiter has rescheduled three weddings from spring to fall, so far. She expects to see less income this year and maybe next year, as dates that would have been available for new bookings are taken by those who are postponing now.

“If you can do anything to get them not to cancel, Amen!” Rossiter said. “That’s my philosophy right now.”

Rossiter said she realizes the situation was nothing her clients could control, so she’s being as flexible as she can.

Tim Maahs, executive director of the Rock County Historical Society, which hosts wedding events at the carriage house on the Lincoln-Tallman House grounds, said he will be issuing some refunds.

“We’re all just holding our breath to see what happens, and we’ll cross that bridge when we get there,” Maahs said. “There’s no sense in panicking. So we’re just keeping calm and doing what we can.”

Britten Langfoss of The Venue in Janesville has lost business, too, including the Parker High School prom. She has moved wedding dates from spring to fall and tries to coordinate with all the vendors who need to be there on the new dates.

People understand no one is to blame, Langfoss said, so they’re rolling with the punches.

“We’re all trying to be optimistic, hoping that it’s not a long-term thing, that weddings don’t have to be canceled indefinitely,” she said.

“No one is blaming anyone, and no one has asked for a refund yet,” Langfoss said. “We still want everyone to have their perfect day, and we hope The Venue is included if that’s the one they wanted.

“We’re doing everything we can, and from what I hear in the industry, everyone else is, as well.”

The wild card in all this is that the government could extend the gathering ban or impose other restrictions as the situation changes in the days ahead. Three people have died from COVID-19 in Wisconsin since Evers made his announcement.

In setting the 10-person limit Tuesday, Evers said, “We might be asking for more in the coming weeks.”

The Vilbrandts, meanwhile, planned a mini-honeymoon with a nice hotel room.

“We’re not going far because everything is shut down,” Carla said.

To get a marriage license and/or request a courthouse wedding, contact the Rock County Clerk’s Office at 608-757-5660 for an appointment. No walk-ins are allowed during the health crisis.