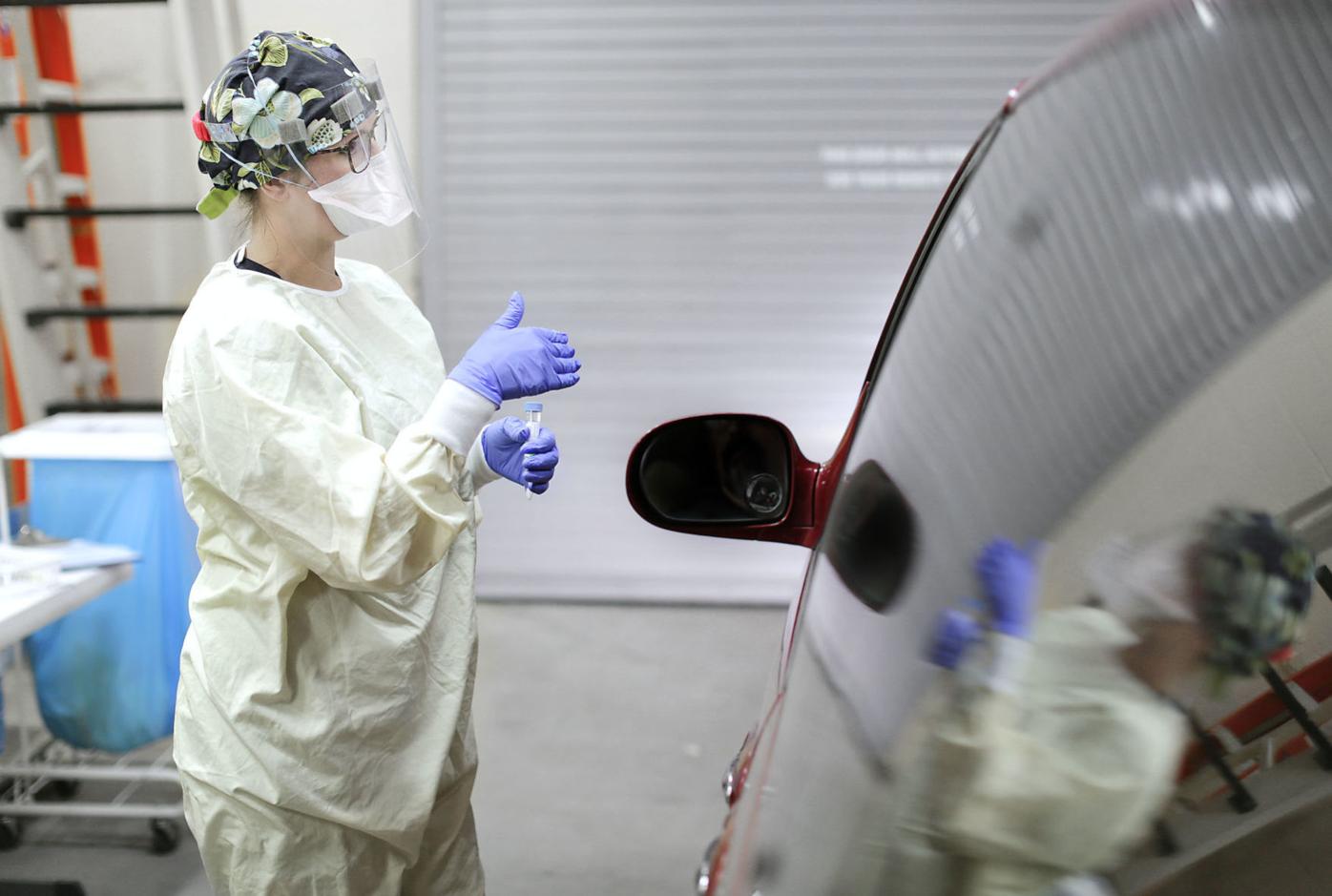 Kaelyn Duesterbeck, a registered nurse at Mercyhealth, speaks with a person after taking a sample at a drive-through COVID-19 testing station at Mercyhealth North in Janesville. 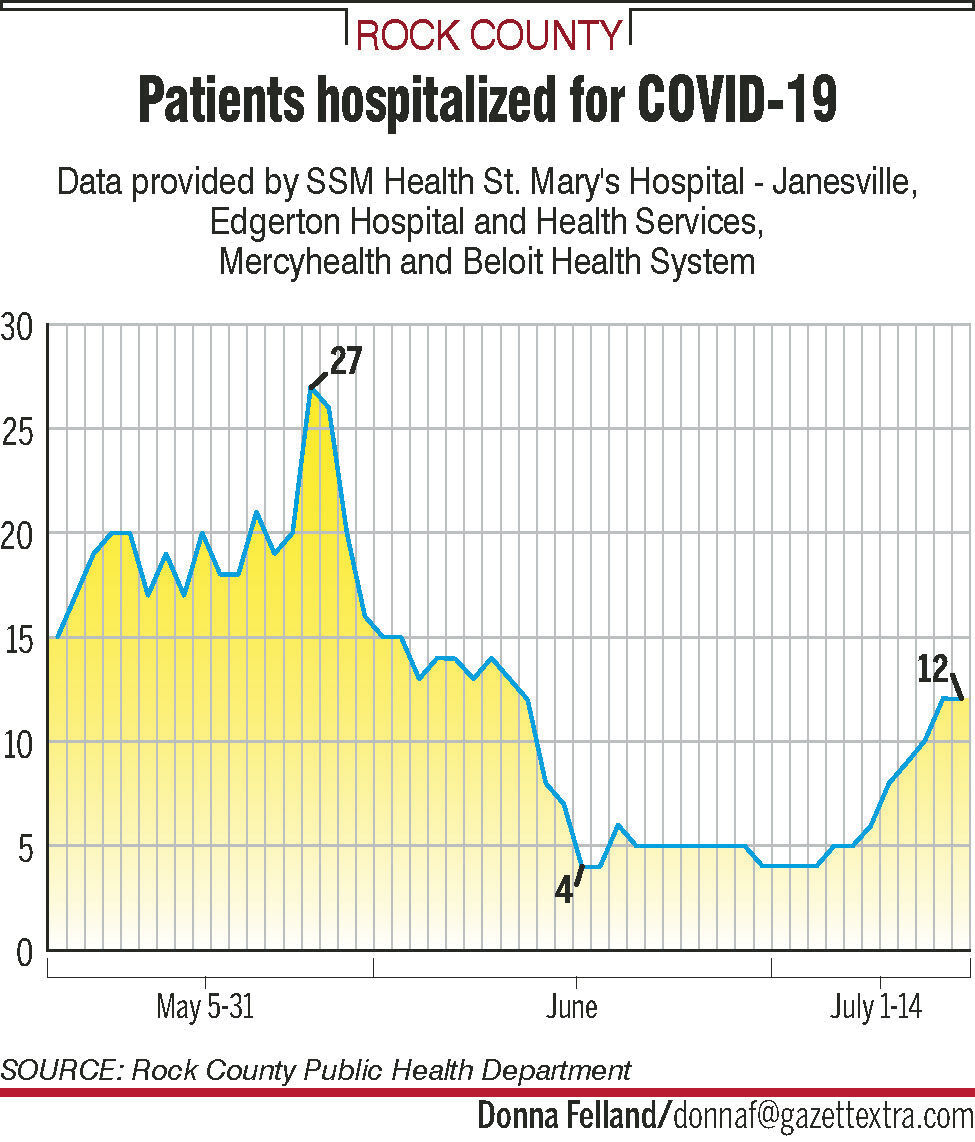 The number of people hospitalized with COVID-19 has grown steadily in the last seven days after weeks of low hospital activity.

Mark Goelzer, medical director for Mercyhealth, said reopening businesses, the Fourth of July holiday and less adherence to safety guidelines all likely contributed to the increases.

Since July 7, COVID-19 hospitalizations across the county’s four hospitals have increased each day from five to 12 on Monday and Tuesday, according to data from the Rock County Public Health Department.

Hospitalizations hovered between four and five people from June 23 to July 6, according to health department data.

Mercyhealth was able to shut down its COVID-19 unit for a brief time, but it has since reopened, Goelzer said.

The county hit its peak of hospitalizations May 26 with 27 people. Hospitalizations began falling after that, remained steadily low and then started climbing last week.

Hospitalizations are expected to increase as positive cases increase, health department spokeswoman Kelsey Cordova said in an email to The Gazette.

There have been no known outbreaks or events to cause the recent increases, Cordova said.

It has been about a month since the county entered its second phase of reopening, which includes guidelines that keep most businesses at half capacity.

Goelzer said the reopening of crowded places, such as bars, is problematic because people tend to get close together and are less careful about following safety recommendations.

The county is seeing more people younger than 40 test positive for the virus, Cordova said.

In addition, contact tracers are encountering more people who are reluctant to share information about who they have seen or where they have been since becoming infected, Cordova said.

“We want everyone to know that we will not judge anyone for their habits, activities or number of contacts,” she said.

“We want to stop the virus, and we can only do that effectively if we can identify and reach out to people who are potentially infected before they come into contact with others.”

The health department believes recent increases are mostly caused by spread within the community, Cordova said.

The county reported 30 more confirmed cases from Monday to Tuesday, one of the highest daily increases since the pandemic started.

Rock County now has 278 confirmed, active cases of the virus.

Since mid-March, the county has reported 1,071 confirmed cases, 24 deaths and 759 people who have recovered.

Elderly patients are considered the most at risk of becoming critically ill, but Goelzer warns more people can get seriously ill without an easy explanation.

The average age of those hospitalized with COVID-19 in Rock County is 60, Cordova said.

Goelzer said he has seen the average age of hospitalized patients decrease over time as people with underlying conditions such as diabetes, obesity and hypertension have become seriously ill.

It will be a year or so before health officials fully understand why people get seriously ill from the virus, Goelzer said.

Officials from Mercyhealth and SSM Health St. Mary’s Hospital-Janesville said they continue to monitor capacity and update their surge plans as needed.

Mercyhealth has plenty of negative-pressure rooms and ventilators available as of Tuesday, Goelzer said.

Health care systems learned a lot at the beginning of the pandemic, and that has helped health care workers better manage the situation now, Goelzer said. For example, a lot more is known about when a ventilator is needed and which drugs can be used to treat symptoms such as inflammation, he said.

Officials from the hospitals and health department are adamant in urging people to wear masks in public, social distance, wash their hands regularly, and avoid groups and crowds.

Goelzer said he would support a countywide mask mandate. However, county officials have not publicly endorsed a mask ordinance.

Janesville City Manager Mark Freitag said Monday the city does not have the legal authority to enact a mask ordinance because it does not have a health officer or its own health department.

Where to get tested

Patients are encouraged to call the health care systems before showing up for testing.

Free public testing is available at these locations:

Rock County recorded its 25th COVID-19 death Tuesday after more than two weeks of no fatalities.