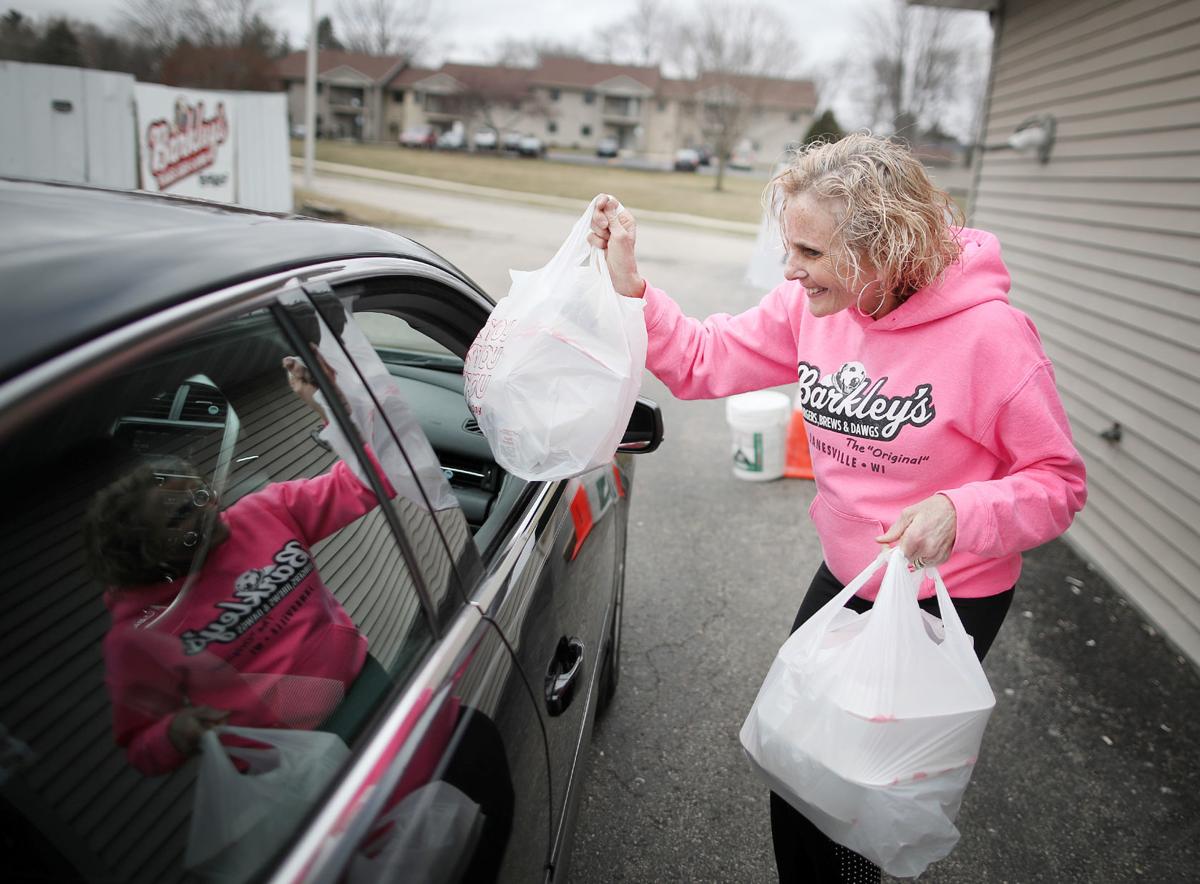 Sue Gray hands a carryout order to a customer through their car window while working at Barkley’s Burgers Brews and Dawgs in Janesville on Friday, March 20. 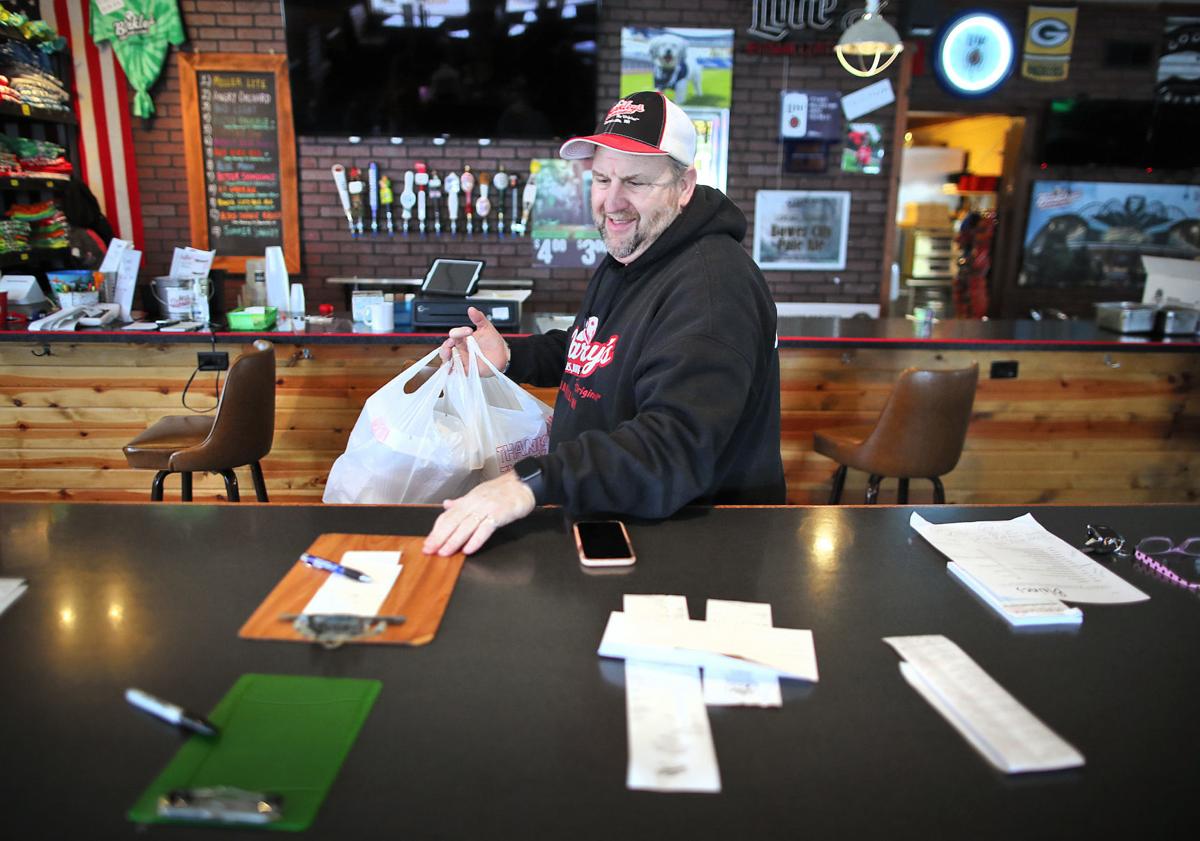 Al Meehan the receipts for an order he’s headed out to deliver while working at Barkley’s Burgers Brews and Dawgs in Janesville on Friday, March 20.

Sue Gray hands a carryout order to a customer through their car window while working at Barkley’s Burgers Brews and Dawgs in Janesville on Friday, March 20.

Al Meehan the receipts for an order he’s headed out to deliver while working at Barkley’s Burgers Brews and Dawgs in Janesville on Friday, March 20.

On any other Friday night, Janesville establishments—from East Point Sportz Pub, to Sidelines, to Sneakers, to Looking Glass, to Whiskey Ranch, to Riley’s, to Barkley’s and to Bazinga’s and ones in between—would be crowded.

Besides discussing plans for the weekend and the past week, patrons would order plates of perch, whitefish and cod, along with the coleslaw, potato salad and fries.

This went on not only in Janesville but throughout Rock County along with the other 71 counties in Wisconsin.

It is the Wisconsin traditional fish fry night.

It was not that way this past Friday.

On this night, the bars were closed. Many of the bars/restaurants offered carry-out and deliveries, but the truth is, eating a fish fry by yourself or a few family members just isn’t the same as sitting elbow to elbow with friends at the bar or restaurant.

This is the problem owners of bars and restaurants statewide are facing in the wake of COVID-19. With the state-ordered closure of bars and restaurants—in the midst of one of their busiest and profitable nights of the year, St. Patrick’s Day—owners and managers were left scrambling to find new sources of revenue.

Those establishments that have kitchens have turned to the curbside pickup/delivery of food to gain some income.

Many of them, including the Wedge Inn and East Point Sportz Pub, put up menus on Facebook.

Ellis said most of the customers are regular patrons who want to help during the coronavirus outbreak.

“I’ve seen a lot of familiar faces coming and picking up orders,” he said.

He asked Cody Rhyner, who makes Barkley’s cheese curds, to enlist several of his friends to attach 700 menu flyers in a few-mile radius of the establishment.

“It wasn’t 15 minutes since they dropped things off that we got calls for lunch,” Meehan said. “These kids did an awesome job. It cost me a few pizzas. You have to get creative in times like these.”

That helped Barkley’s exceed what Meehan expected. Meehan said revenue was down about 25% compared to a normal Friday night, but that was with no beer or liquor sales.

“With booze, it probably was more than we do on a Friday night,” Meehan said. “I’m not kidding. It was unbelievable.”

A city of Janesville tax board and Blaine’s Supply were just a few of the groups that made special lunch orders to help Barkley’s.

Not all the establishments did as well, and the challenge will be to keep this pace up.

Sharen Hoskins, president of the Rock County Tavern League, said the closure of bars and restaurants serving booze could be devastating for some owners.

“I’m really concerned a lot of bars might not make it through this,” Hoskins said, “especially the little bars that don’t have food sales. The little mom-and-pop places up north.”

The local bars are attempting to help each other. For example, on Thursday, the East Point staff ordered lunch from Sneakers. On Friday, the Sneakers staff returned the favor.

The longer the coronavirus poses a threat and isolation regulations remain in effect, the greater damage it will have on the tavern and restaurant industry.

“We’re all trying to support each other,” Hoskins said. “Think of every fundraiser you ever attended. They all are held at bars. I hope the public doesn’t forget that.”

Area dining options due to COVID-19

View a map detailing area carry-out, curbside pickup and delivery options due to onsite dining restrictions because of to the COVID-19 pandemic.