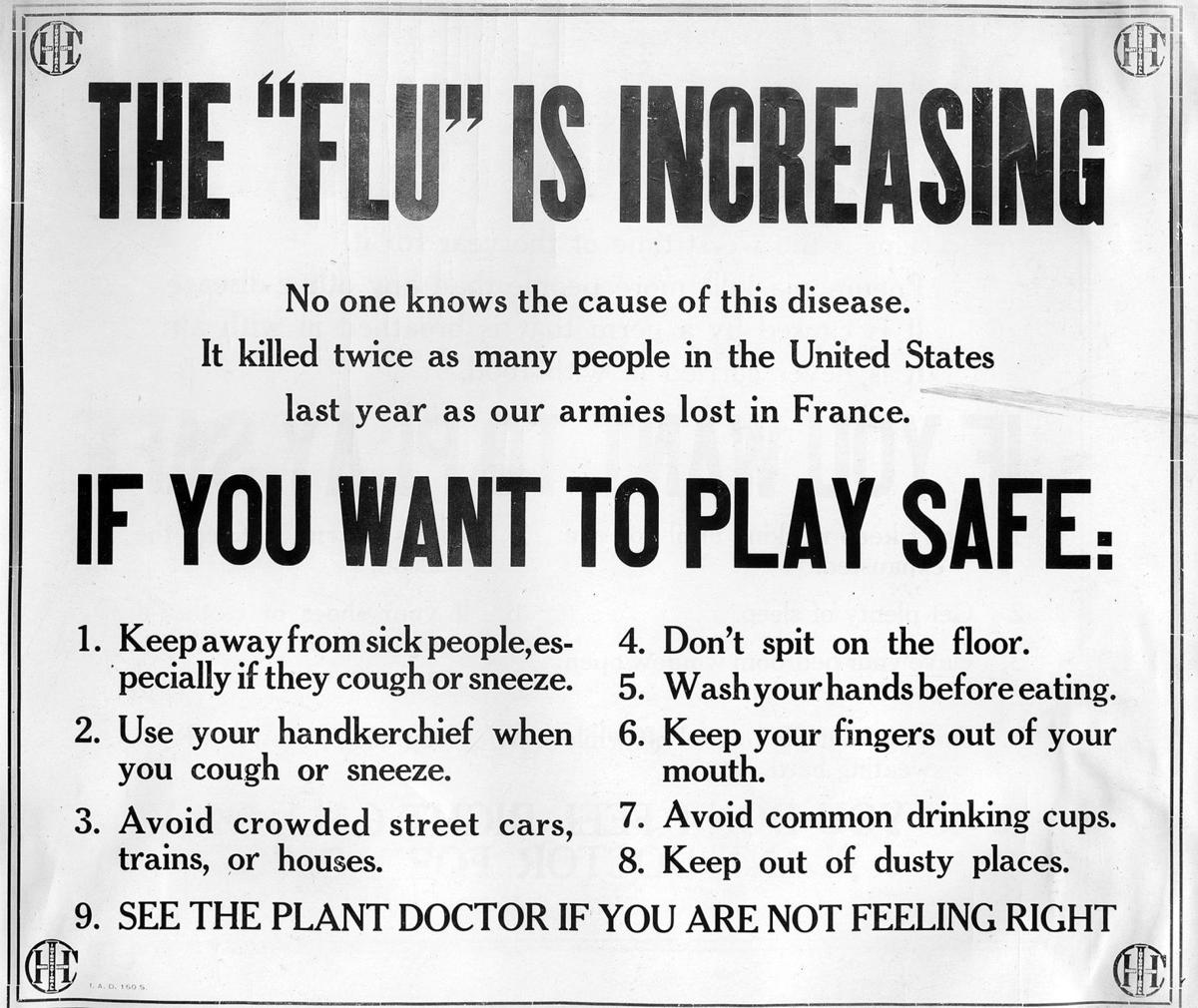 A sign posted in a factory during the 1918 Spanish flu pandemic. 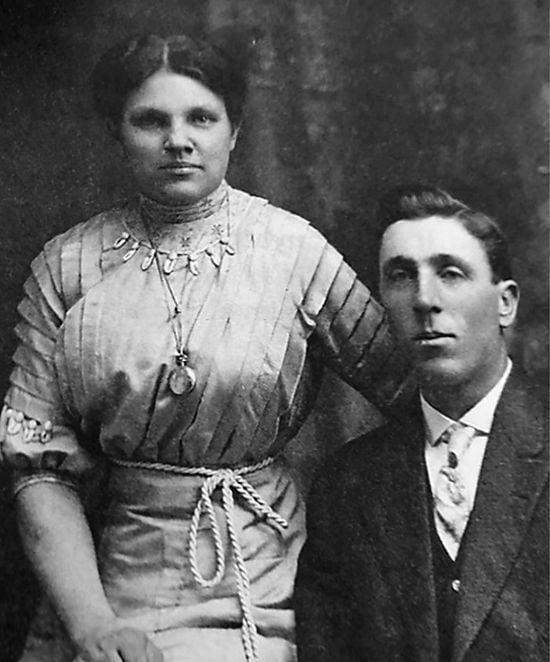 This photo shows Abby and John Strauss at their 1911 wedding. Abby died at her niece Marge Van Galder’s Janesville home in 1918 of influenza after caring for Marge, who was also sick. Marge Van Galder recovered and wrote about the frightening and sad experience many years later.

A sign posted in a factory during the 1918 Spanish flu pandemic.

This photo shows Abby and John Strauss at their 1911 wedding. Abby died at her niece Marge Van Galder’s Janesville home in 1918 of influenza after caring for Marge, who was also sick. Marge Van Galder recovered and wrote about the frightening and sad experience many years later.

On Oct. 5, 1918, Janesville City Health Officer S. B. Buckmaster told The Janesville Daily Gazette that reports of Spanish influenza in the city were more than wrong, they were unpatriotic.

On Oct. 10, 1918, the Janesville City Council enthusiastically supported Buckmaster’s recommendation that all schools and “places of amusement” be closed to prevent the spread of the flu.

The response to the 1918 Spanish Flu pandemic that killed 675,000 people in the United States was similar to the response to coronavirus, but for different reasons.

In 1918, World War I was wrapping up, and “neither the Allied or central powers wanted to admit to additional loss of life during a conflict that hinged on who had more manpower,” according to History.com.

In 2020, some politicians initially thought the threat of the coronavirus was being overplayed for political ends. But as the news became more dire, even the most skeptical politicians acknowledged its seriousness.

In 1918, The Janesville Daily Gazette, the forerunner of today’s Gazette, chronicled the story of the Spanish Flu in two ways. The first was through traditional news stories. The second was news from “correspondents.”

The correspondents recorded who was visiting from out of town, what parties or church suppers were held and who had returned from—or was going on—trips. Hospitalizations, illnesses, births and deaths were duly mentioned.

Here’s how the story played out:

Sept. 24, Edgerton: “An epidemic of Spanish Influenza has infested the city. Nearly 100 pupils are absent from the high school and a greater number are absent from the lower grades. Several of the teachers are also confined to their boarding places with the disease.”

At the time, Edgerton’s population was about 2,700, and if the correspondent’s estimates were correct, that means close to 10 percent of the population had the flu.

Oct. 1, Edgerton: “One half of the telephone force is sick with the Spanish influenza, and the girls are working double time. There are, as a rule, nine girls in the office, but there are four girls this week ... with half of the crew gone, the public should exercise a patience with the other half.”

“The schools were closed yesterday until Thursday in an effort to stop the spread of Spanish influenza in the city … They had been closed last week … but when they reopened yesterday fully half of the students were absent.”

“There are several very severe cases of influenza in the city. Walter Sack, who is employed at the Swift Drug Company, is seriously ill. Henry Haugen, who resides north of the city, is reported being very ill.”

Oct. 4, town of Center: “Her friends will be shocked to hear of the death of Mrs. Jeannie Zenter, 17, who took ill on Sunday and died at 5 p.m. Thursday.”Oct. 5, Delavan: “The community was greatly shocked to learn of the death of Dr. Ray Rice.” Rice, 44, died of influenza.

In the same edition, a headline announces, “Health conditions in the city excellent.”

“As a patriotic measure (city health officer) Dr. S.B. Buckmaster urges that all those with the interests of the country at heart will refrain from passing any exaggerated rumors of conditions in ‘this city’ or ‘that camp’. Many reports are constantly being circulated which are entirely false.”

Buckmaster was referring to the army camps and naval bases where the flu was spreading rapidly.

Oct. 10: The Janesville City Council agrees to Dr. S.B. Buckmaster’s order that “all moving picture shows, theaters, dance halls, public schools, and churches and all places of public assemblage be closed to the public beginning Thursday, Oct. 10 until further notice.”

“Notice is hereby called to the state law against spitting upon sidewalks and in public places, also all persons should observe the rules about using a handkerchief when coughing and sneezing.”

Buckmaster’s request is supported unanimously by the council with the exception of Alderman Dulin, who is sick with the influenza at Mercy Hospital.

Oct 10, Milton: “Kenneth Randolph, son of the Rev. and Mrs. Randolph, died yesterday after an illness of two days. He leaves a wife and eight-month-old little girl ... A few hours after receiving the telegraph about the death of Kenneth, a message came to the parents from the government saying that Paul Randolph is on the list of missing men on the Herman Frasch that collided with another boat on Oct. 4.”

The Herman Frasch was a transport ship. It collided with the tanker George G. Henry 150 miles off the Nova Scotia coast, according to naval history. The impact was so great the Frasch went down in seven minutes.

In a column next to the one carrying the news of Randoph’s death from flu is a item announcing that 20,000 people plan to participate in a “monster parade” in Green Bay as part of a Liberty Loan drive.

Oct. 18: A series of stacked headlines in The Gazette relates the news:

Oct. 23: Buckmaster insists public meetings and gatherings of all kinds continue to be banned.

Oct. 25: Buckmaster orders stores to limit their hours, and billiard halls are to be closed at all times, but their cigar stands can remain open. Butchers, grocers and restaurants are allowed slightly longer hours.

“In spite of the efforts which have been made to check the spread of Spanish influenza in our city, there seems to be an increase from 275 cases to at least 611 cases in one week.”

J.P. Cullen, the president of the Janesville Chamber of Commerces, issues a statement supporting Buckmaster’s decision.

“Human life is the dearest thing on earth, and to conserve that we heartily endorse the action of the health officer and will continue to endorse this or any other movement having the interest of the whole community at heart,” Cullen stated.

Oct. 30: Buckmaster is “confined at home” with the flu but is able to convey his support of state health official’s decision that dance halls and theaters might open soon. It’s unclear when they reopened, but the decision was premature.

Dec. 4: Buckmaster says fewer than 20 cases in Janesville, and the “city is practically free of contagious disease.”

Dec. 17: The Archbishop of Milwaukee forbids all churches from holding midnight mass on Christmas Eve.

“The practice of holding the first Mass on Christmas Day at midnight was started several years ago and has become part of the Christmas joys of many people, not only Catholics but Protestants have attended the Mass each year and the crowd has grown larger,” the Gazette reports.

Dec. 24: Buckmaster orders all theaters and dance halls to close again due to a resurgence of cases.

Jan. 7: Buckmaster predicts that the disease will be stamped out soon but wants to proceed cautiously.

“He does not care to lift the ban and have the disease breakout again,” the Gazette reports.

March 17: The last message from the health officer on the the issue comes roughly five months after the crisis started.

“Buckmaster says there’s not a contagious disease in the city at this time,” the newspaper reported. “The health condition of the city at present has never been better.”