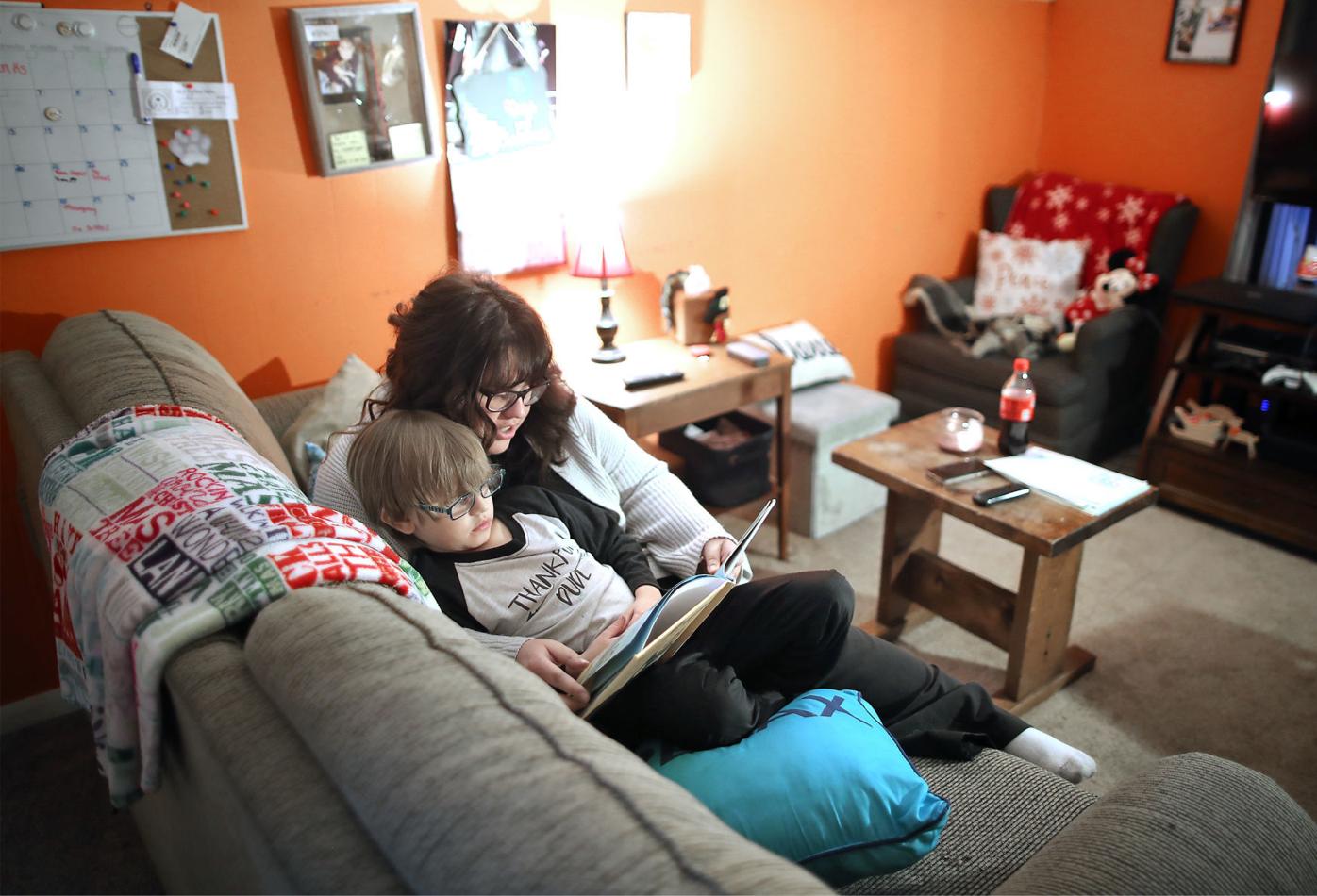 Tabitha Frank reads a book to her son A.J. inside their Janesville home. Tabitha gave birth to A.J. after being told biological children weren’t an option. She has started the process of creating the Endosalpingiosis Foundation to spread awareness for women diagnosed with endosalpingiosis. 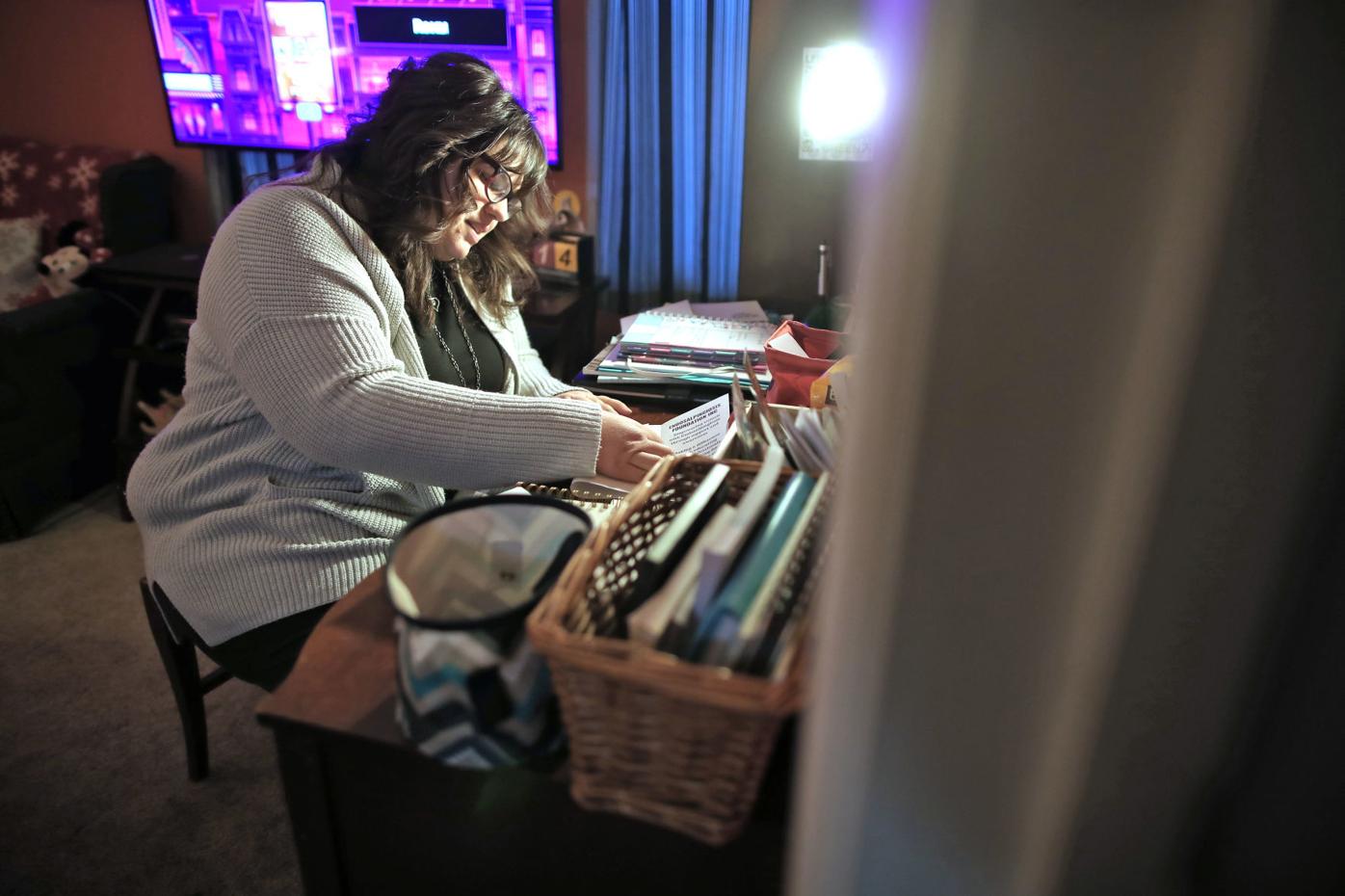 Tabitha Frank works at her desk to fold brochures for her the Endosalpingiosis Foundation. Endosalpingiosis is a painful reproductive condition where tissue similar to the tissue from the Fallopian tubes is found elsewhere in the pelvic cavity, causing pain and infertility. 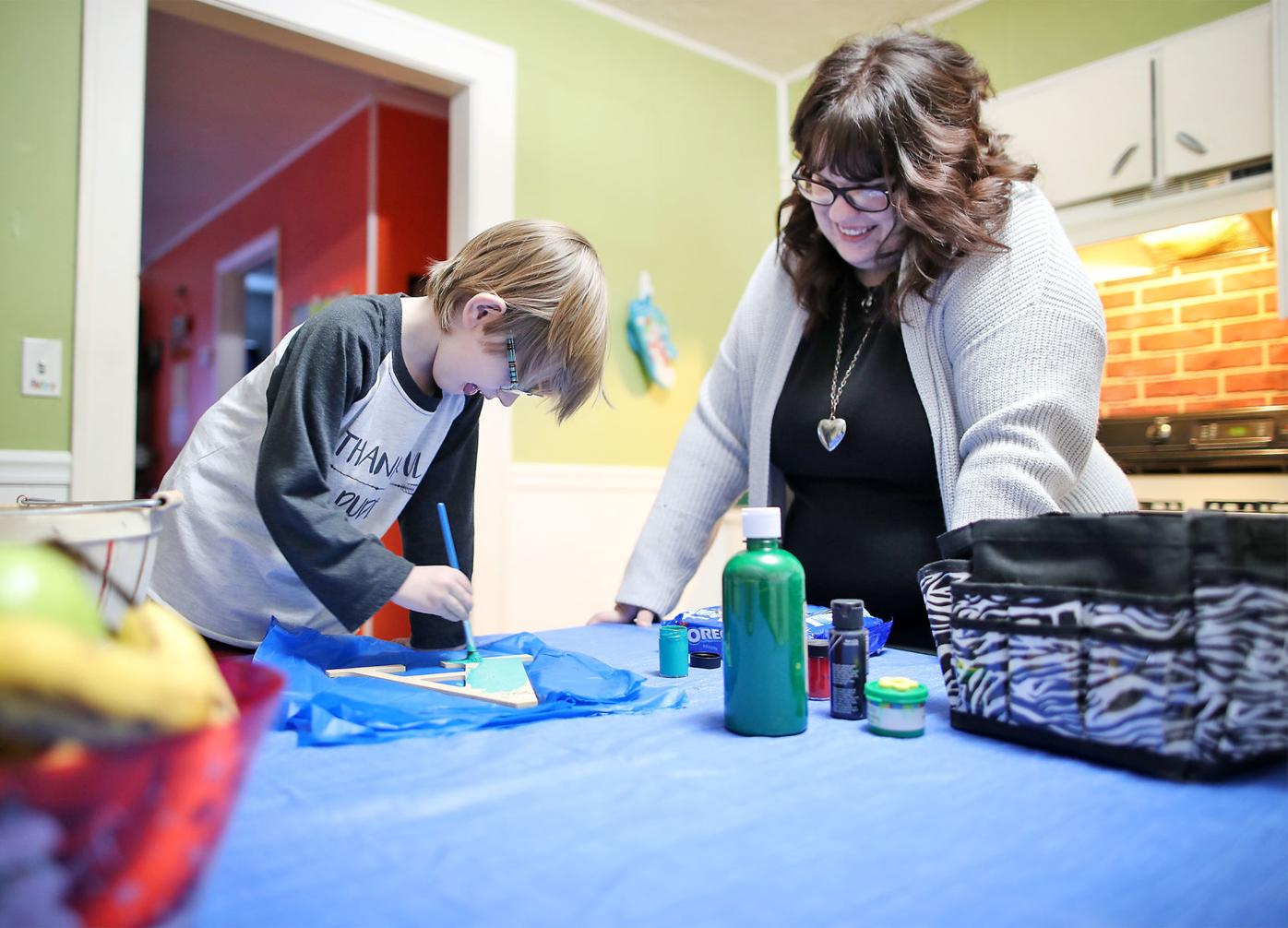 Tabitha Frank helps her son A.J. paint a large letter A after school. 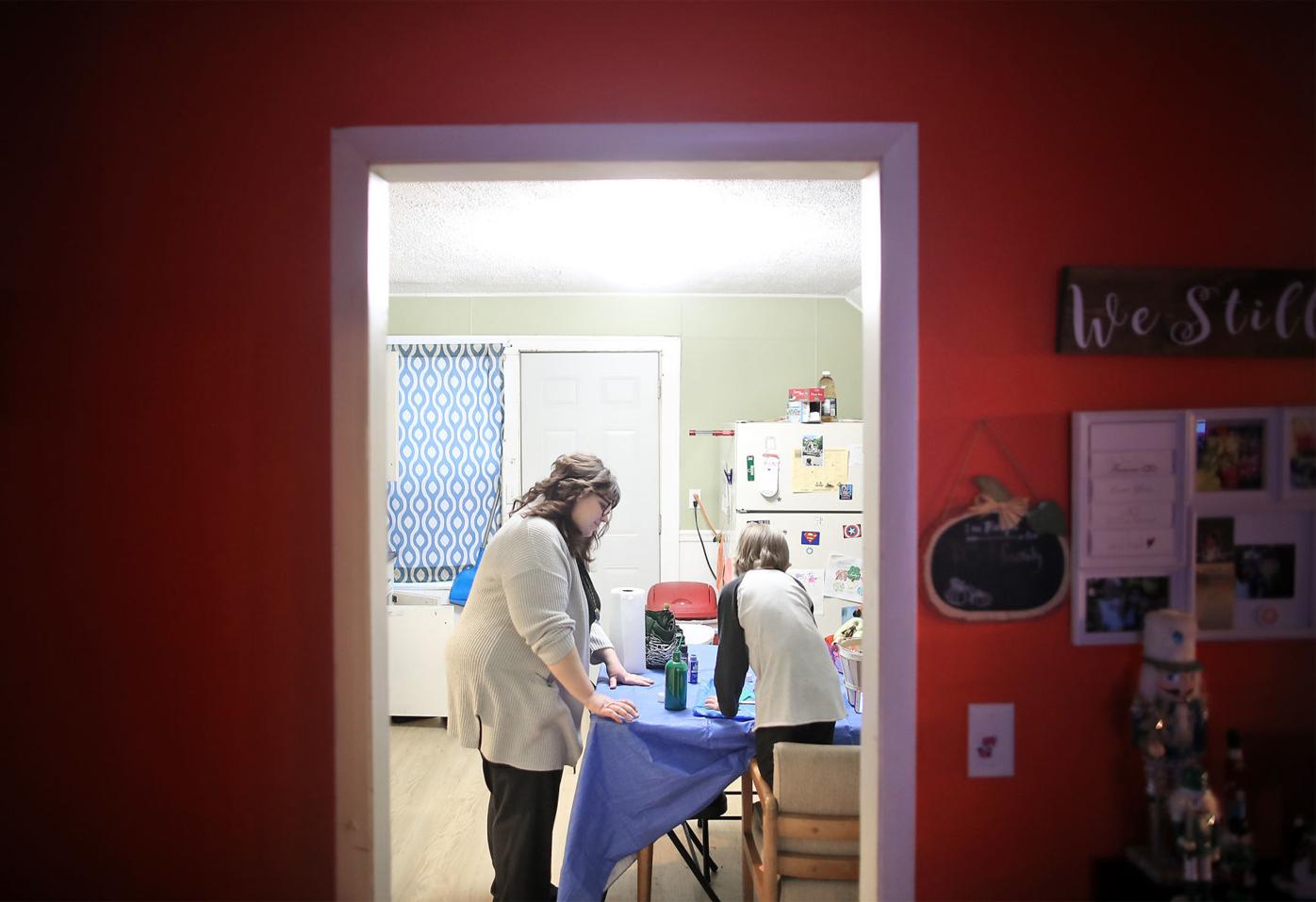 Tabitha Frank helps her son paint at their kitchen table. 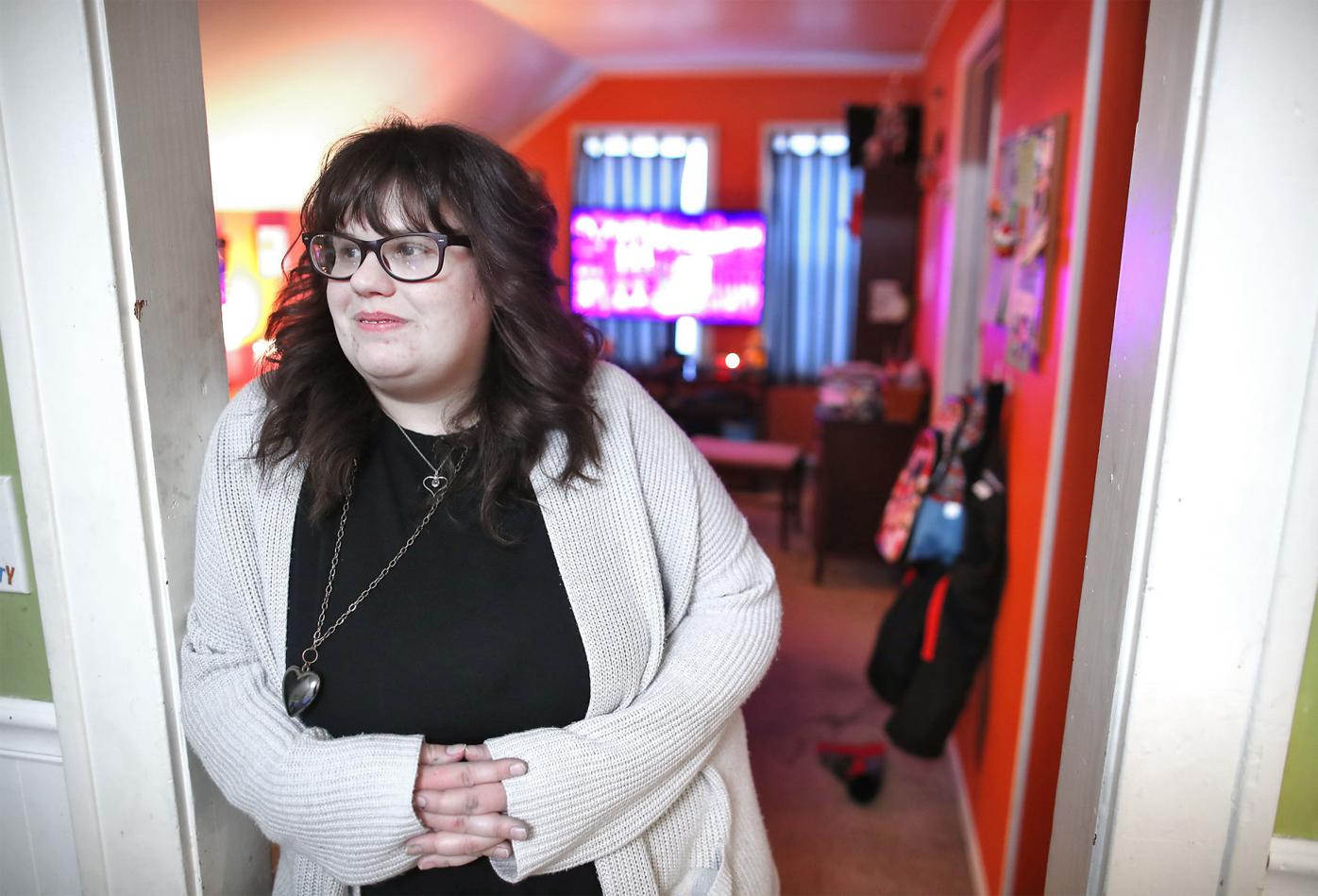 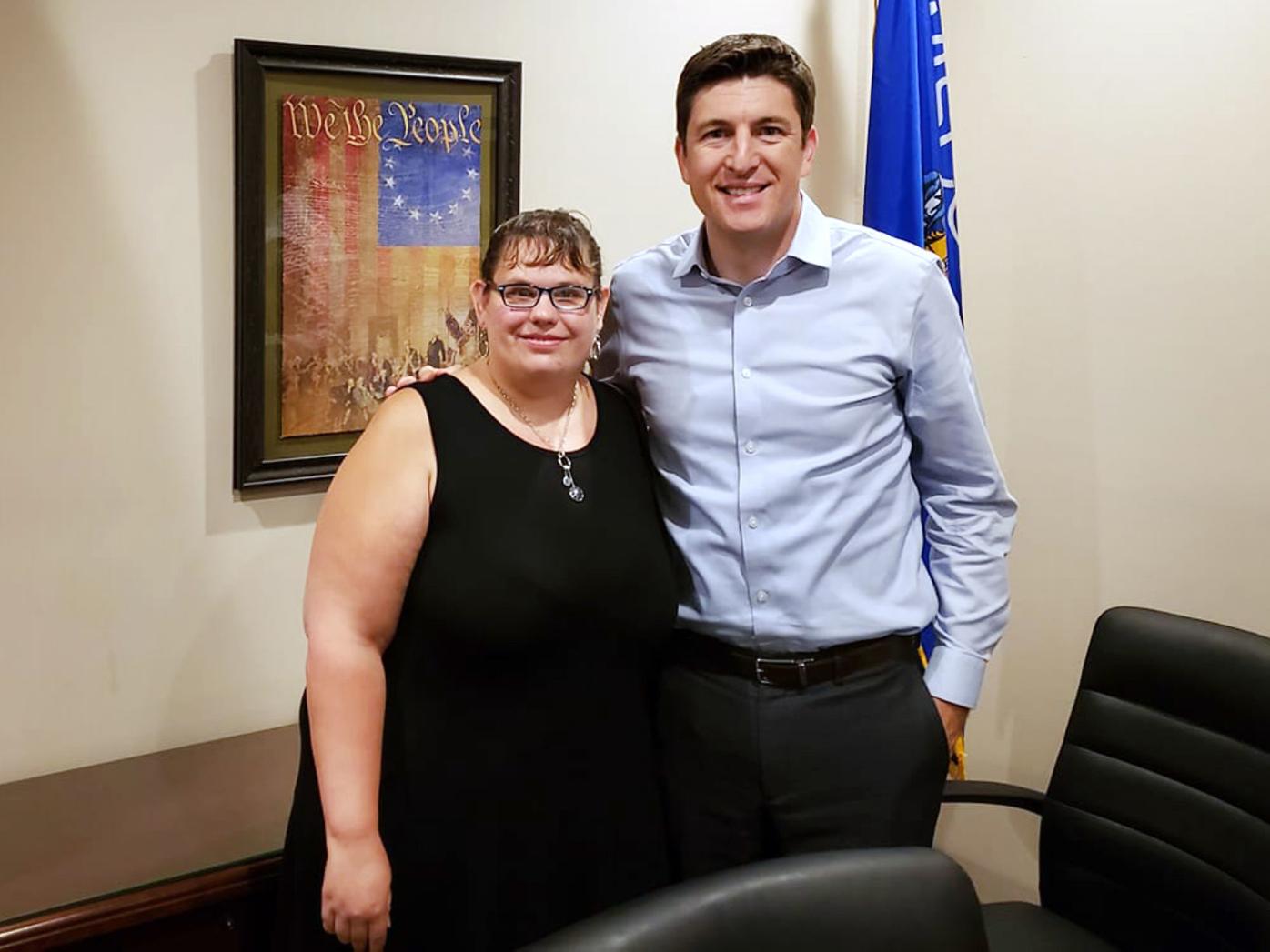 Tabitha Frank, left, met with U.S. Rep. Bryan Steil, R-Janesville, earlier this year to champion a bill to support her cause.

Tabitha Frank was left with one fallopian tube, one ovary, one kidney and no appendix by the time she was 21 years old.

Each surgery came with hope the pain Frank has experienced since she was a teenager would go away.

But it never did and likely never will.

Frank, 34, of Janesville, was diagnosed five years ago with endosalpingiosis—a rare condition that occurs when tissue from the fallopian tubes is found in other parts of the body, she said.

After a “miracle” pregnancy, a meeting with a congressman and a donation from a friend, Frank is ready to help other women living with pain.

Frank has started a nonprofit organization—Endosalpingiosis Foundation—to create awareness of the condition, connect with women who are suffering and raise money for endosalpingiosis research, Frank said.

The organization is in its early phases. Frank is trying to fundraise to apply for 501(c)(3) status and build a network of women who need help or want to help others.

Being diagnosed with a reproductive health condition can lead many women to feel depressed, anxious, isolated or shameful, said Patricia Nahn, gynecologist at Mercyhealth in Janesville.

Nahn typically sees two or three women a day who are experiencing pain, heavy bleeding or irregular periods. Those symptoms can be normal or can be signs of something more serious.

Frank started a Facebook support group for women with endosalpingiosis and has talked to more than 100 women from around the world who can relate to her experience.

Nahn said it’s important for women to understand their vaginas, uteruses and fallopian tubes are beautiful.

The women in Frank’s family told Frank her irregular periods as a teenager were normal.

But in 2003, Frank was rushed to the emergency room for abdominal pain. Doctors found a cyst on her ovary, and it had to be removed that day, she said.

In 2004, Frank had one of her fallopian tubes removed, and in 2005 her appendix and one kidney were removed in efforts to eliminate her pain, she said.

She became pregnant with her son, A.J., she said.

Almost immediately, she started having complications that led her to being on bed rest for her entire pregnancy, Frank said.

Three months after A.J. was born, a doctor performed laparoscopic surgery and diagnosed Frank with endosalpingiosis, she said.

The surgery came after one doctor tried changing her birth control medication to manage her symptoms and another doctor thought she had pelvic floor problems, Frank said.

There is little that can be done to treat the condition and it can only be diagnosed through surgery, Frank said.

Eventually, Frank was able to get a partial hysterectomy, which has helped, but she still lives with pain and a slew of other side effects.

Endosalpingiosis is similar to endometriosis—a condition where uterine tissue grows outside the uterus, Nahn said.

With both conditions, the body reacts to misplaced tissue with inflammation and pain, Nahn said.

But endometriosis is far more common than endosalpingiosis. There is more research of endometriosis and more resources for women with the condition, Nahn said.

Few studies of endosalpingiosis have been done because of its rarity, meaning there’s little data to guide treatment, Nahn said.

A doctor with UW Health whom The Gazette reached out to for this story cancelled an interview with the newspaper, saying he did not know enough about endosalpingiosis to discuss it.

Many women struggle talking about reproductive health because they think it is embarrassing or gross, Nahn said.

Doctors have to create a dialogue that makes their patients comfortable to open up. Most importantly, they need to treat women with respect, Nahn said.

Implicit gender bias has existed for years in the medical field, Nahn said.

Men often are taken more seriously than women when they complain of having pain or discomfort, Nahn said.

Medical professionals are getting better at listening to women, but past practices still affect female patients, Nahn said.

For example, many pain studies have included only males because drug companies don’t want to run the risk of women dropping out because they become pregnant, Nahn said.

That means data used to treat pain is based completely on male anatomy and do not pertain to women’s needs, Nahn said.

”It leaves us feeling like the second gender,” Nahn said.

Frank had a handful of miscarriages and ectopic pregnancies before having A.J., she said.

Each miscarriage came with physical and emotional pain, Frank said.

When Frank became pregnant with A.J., she didn’t tell anyone besides her partner until after the first trimester because she didn’t want to get anyone’s hopes up, including her own.

Conditions such as endosalpingiosis and endometriosis can cause infertility, leaving many women emotionally in shambles, Nahn said.

“The emotional impact on women seeking to have children unsuccessfully cannot be overstated,” Nahn said. “It is devastating for many. It is such an innate thing—so primal in a way.”

Even women who thought they never would have kids feel broken after learning they are infertile, Nahn said.

“I tell people all the time, it is different to think that ‘I don’t want’ than ‘I can never have,’” Nahn said. “Those are two different psychological constructs. ‘Not want’ has power, ‘I can’t have’ is powerless.”

The first donation Frank received toward starting her nonprofit was from her best friend.

Last Christmas, Frank’s friend Jenna said all she wanted for Christmas was to donate to Frank’s mission. Jenna’s dad then wrote a $50 check, Frank said.

This holiday season Frank wants to create care packages for women she has met via her online support group that have such goodies as heating pads and chocolate, she said.

She also wants to host a “girls’ night in” where women can hear doctors and therapists speak about women’s health and enter to win prizes, Frank said.

On a larger scale, Frank wants to help women across the country by urging lawmakers to include endosalpingiosis as a condition that qualifies people for disability pay, she said.

Frank met with U.S. Rep. Bryan Steil, R-Wis., earlier this year to champion a bill supporting her cause. Frank said she heard from one of Steil’s staffers this month, who said the office is looking into her concerns in addition to other rare disease legislation, Frank said.

Pain has left Frank unable to work for years, she said, and the nonprofit is her full-time job.

Recently, Frank was folding pamphlets on a desk in her small, orange living room.

She held up one of the pamphlets and acknowledged the folding was not perfect, but she is doing the best she can with what she has.