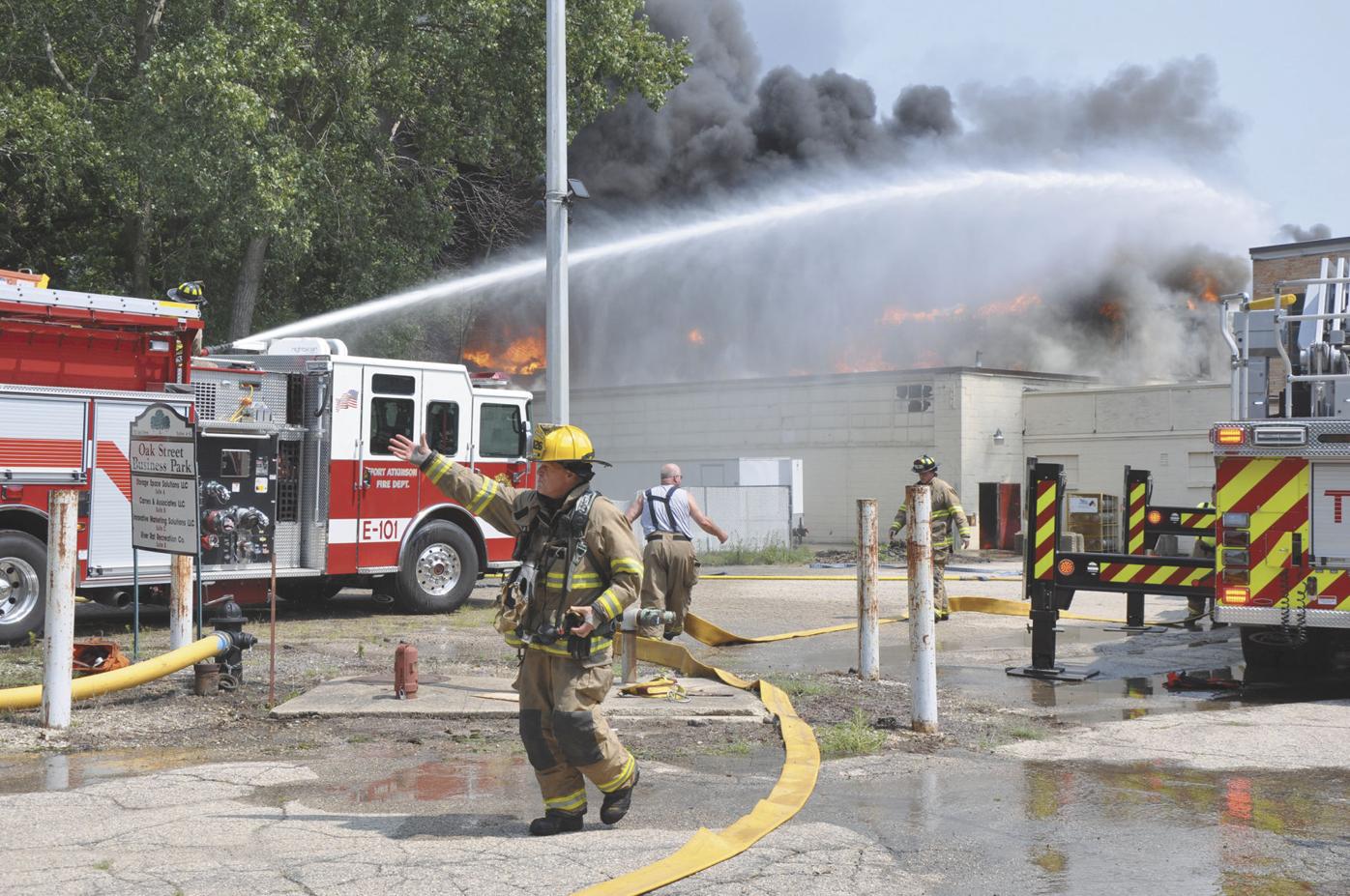 Firefighters work to put out flames in the 700 block of Oak Street in Fort Atkinson earlier this month where a structure fire near the Fort Atkinson Kennel Club started. 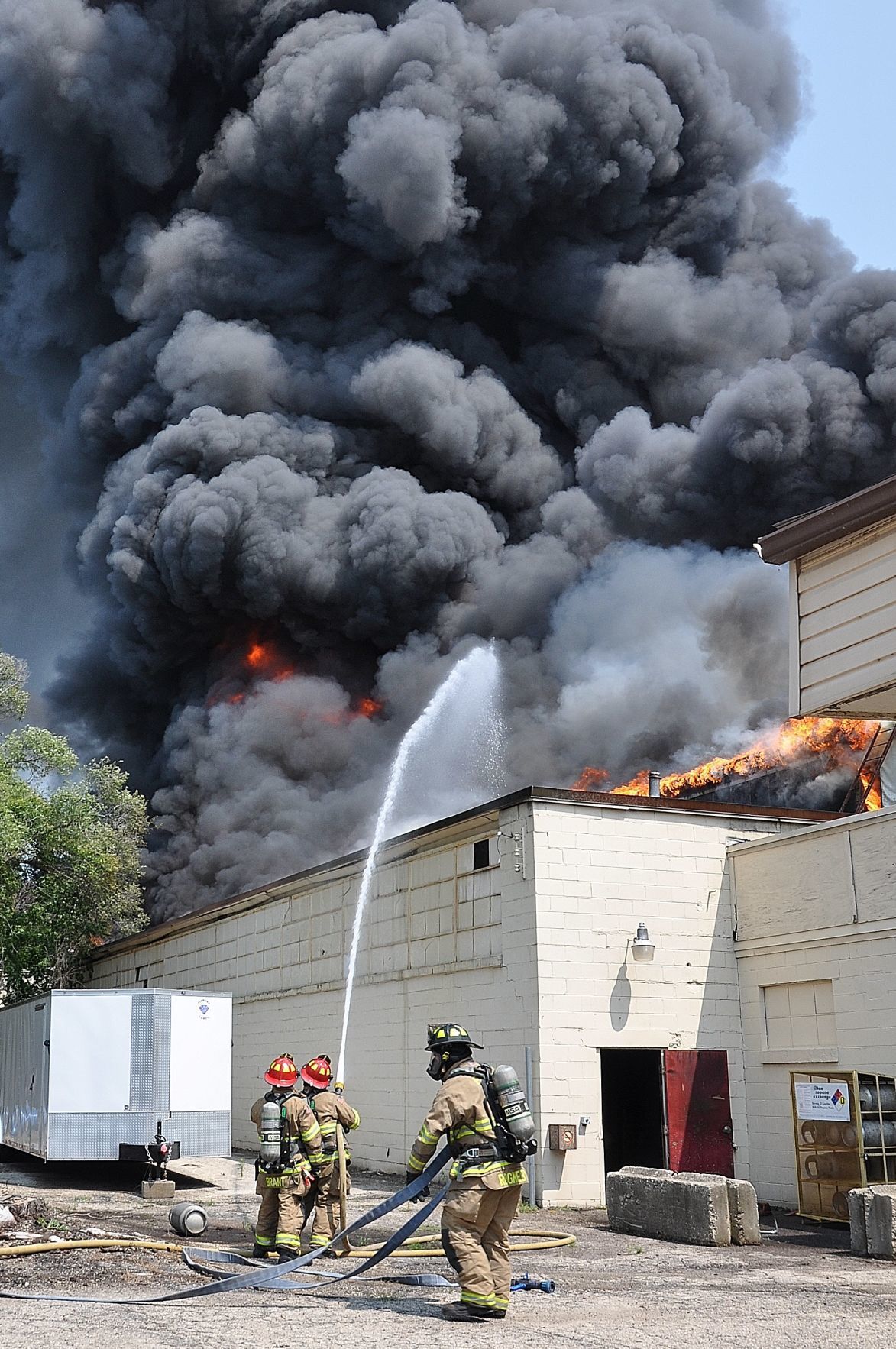 Firefighters fight a towering fire at a building in the 700 block of Oak Street in Fort Atkinson earlier this month. Multiple fire departments responded to the fire.

Firefighters work to put out flames in the 700 block of Oak Street in Fort Atkinson earlier this month where a structure fire near the Fort Atkinson Kennel Club started.

Firefighters fight a towering fire at a building in the 700 block of Oak Street in Fort Atkinson earlier this month. Multiple fire departments responded to the fire.

They see him in a police SUV and later that day at the helm of a fire engine as the director of public safety, ready to help put out a blaze.

There is a sense of community relations here that you simply don’t see in many towns.

Along Main Street there are a few places to get something to eat and even pick up some supplies at a hardware store.

Traffic is not busy in this rural area of Jefferson County, but what happened here five years ago might be a key for hundreds of rural Wisconsin communities that are experiencing fire and emergency response issues Palmyra once had.

It was a single car fire at the corner of Second and Main streets at a stop sign in 2016 that changed how this area looks at services.

Smoke and flames filled the car two blocks from the fire station that day—and no one responded.

“Eagle had to put out the fire because we couldn’t get out the door,” said Village Trustee Bill Lurvey.

That same week an area resident had a cardiac issue and there was no one to help until the city of Whitewater came to the call.

“Those two events for me, those were turning points,” Lurvey said. “That could never happen again.”

Across Wisconsin, small-town volunteer fire departments are struggling with an old model that is simply outdated with limited funding.

Fire departments like Milton’s are looking at sharing resources or merging their service areas with that of adjacent communities—in Milton’s case, Edgerton’s or Janesville’s—as a possible solution to a lack of funding.

Other fire departments just struggle to find people to give their time to a community but are faced with increasing requirements to become a firefighter in the first place.

“Nobody functions off a volunteer police department,” said Jerry Biggart, part of the Professional Firefighters of Wisconsin and chair of the Wisconsin EMS Board. “I think people are a lot more afraid of a home invasion than a house burning down.”

Calling fire department issues in the state “abysmal,” Biggart said there are a lot of reasons the model has not changed. But the only way to fix the problem is something politicians simply have ignored, he said.

“They have committees raising red flags,” he said. “They are not stupid people. They know the only thing that will fix this is money.”

But something more has to happen, Biggart said. More responses where no one shows up. Then, he believes, legislative bodies might change the system that offers no monetary solutions.

Recruiting volunteersWhen she was on her family farm as a child, Lisa Becher watched her dad run to the fire department when the whistle blew in Footville. He was a volunteer fireman and rushed to calls.

But when the family lost the farm, Becher’s father had to get a full-time job, and he no longer could respond to a fire during those hours.

“You think of the lack of job opportunities in a small town,” she said. “You’re not close enough.”

The oldest of five girls, Lisa said she never thought firefighting was something she could do, especially as a woman.

“I got my degree in education at Eau Claire,” Becher said.

In Footville, a village of 832 people just west of Janesville, she saw a firefighter walking around one day and asked if they needed any volunteers.

“That next morning I had a pager,” Becher said. “I wanted to be a volunteer and be a firefighter like my dad.”

Years later, Becher now is an instructor at Madison College, teaching in its fire academy that offers several levels of courses.

While people coming into the program learn to be firefighters, many are looking for a career, not volunteer work. However, volunteers need to complete 60 hours of training for a job they basically will make no money at.

A volunteer at the Jefferson Fire Department, for example, makes $10.50 per call. So, if that firefighter is battling a fire for 10 hours, they make roughly $1 per hour.

And each community has its own volunteer plan and pay schedule, if any.

The crisis, which Becher said is coming, is finding enough volunteers.

“It’s getting harder to recruit and people’s lives are so busy,” she said. “They live outside of the area or work.

“Only way to fill those roles is to start paying them more money,” Becher added. “Then that kind of takes away what a volunteer fire department is all about.”

Becher is part of a program that is recruiting high school students to get involved in fire departments.

“We have a program we started four years ago,” she said. “We are going into high schools and talking to junior and seniors, and trying to train them and put the idea in their head they can be firefighters at a young age.”

But she is aware that the model that Wisconsin uses is not sustainable.

Of the 765 fire departments in Wisconsin registered nationally, 78.8% are based on a volunteer model. While that might have worked in generations past when there were farmers who came running when the whistle blew, many volunteers today have jobs and might not even work in the town in which they volunteer.

And the fight these departments have is to find a new generation of volunteers.

“I think we need to find a better way of coming up with recruitment and volunteering,” Becher said. “We have to get creative. I fear in the future we will be in crisis mode and won’t have enough volunteers.”

The biggest feedback Becher hears from departments around the state is “please don’t raise minimum hours for entry level training—that would have been too big of a burden on them.”

Madison College has built a new facility for training firefighters that includes a new engine that costs $250,000.

The college can give students training and let them know the job is rewarding, Becher said.

For many, being a firefighter becomes a tight squeeze to fit work, family and life into a model of volunteering.

“Something has to give,” Becher said.

A solutionIn 2016 the state Legislature formed a committee to look at volunteer shortages for fire and EMS. Small was on that committee, as was Biggart, the Professional Firefighters of Wisconsin board member and chair of the Wisconsin EMS Board.

Biggart said there were members of departments across the state who spoke, some in tears, of the issues they were facing.

“Probably the biggest waste of time ever spent,” Biggart said of the committee. “Essentially nothing came of it.”

The committee was chaired by Sen. Steve Nass, R-La Grange. Numerous emails to Nass’ office to comment on the committee’s results were not returned.

“The people with the power won’t do the one thing that is needed to let these people raise taxes to fund public safety,” Biggart said.

The current model for funding fire departments in Wisconsin is not sustainable, he said.

“I started as a volunteer, and I think of that whole model and that generation is just not the generation today,” Biggart said.

When you see volunteers arrive at a fire these days, he said many are over the age of 60 doing a very physical job. And the average age of volunteer firefighters is increasing each year.

Not only is battling a fire dangerous, but there is a risk of injury, Biggart said. While there is legislation out to allow mergers and consolidation of fire and EMS between communities, the solution truly lies with money, he said.

“The biggest issue is if there is a way to have a fire district to have a board,” Biggart said. “And be its own taxing entity like school boards are.”

The current option for departments to get more money is by referendum. But Biggart said local governments usually don’t want to go that route.

“The community probably has no idea how underfunded and understaffed (fire departments) are,” he said. “I think communities are doing everything they can to attract paid on-call.”

Biggart said defunding public safety has been an issue since Gov. Scott Walker helped push through Act 10 where shared revenues were slashed.

When explaining that the cost of a fire department to a community would be less than a can of soda per household, he gets the same answer.

Sign up for our Daily Update & Weekend Update email newsletters!