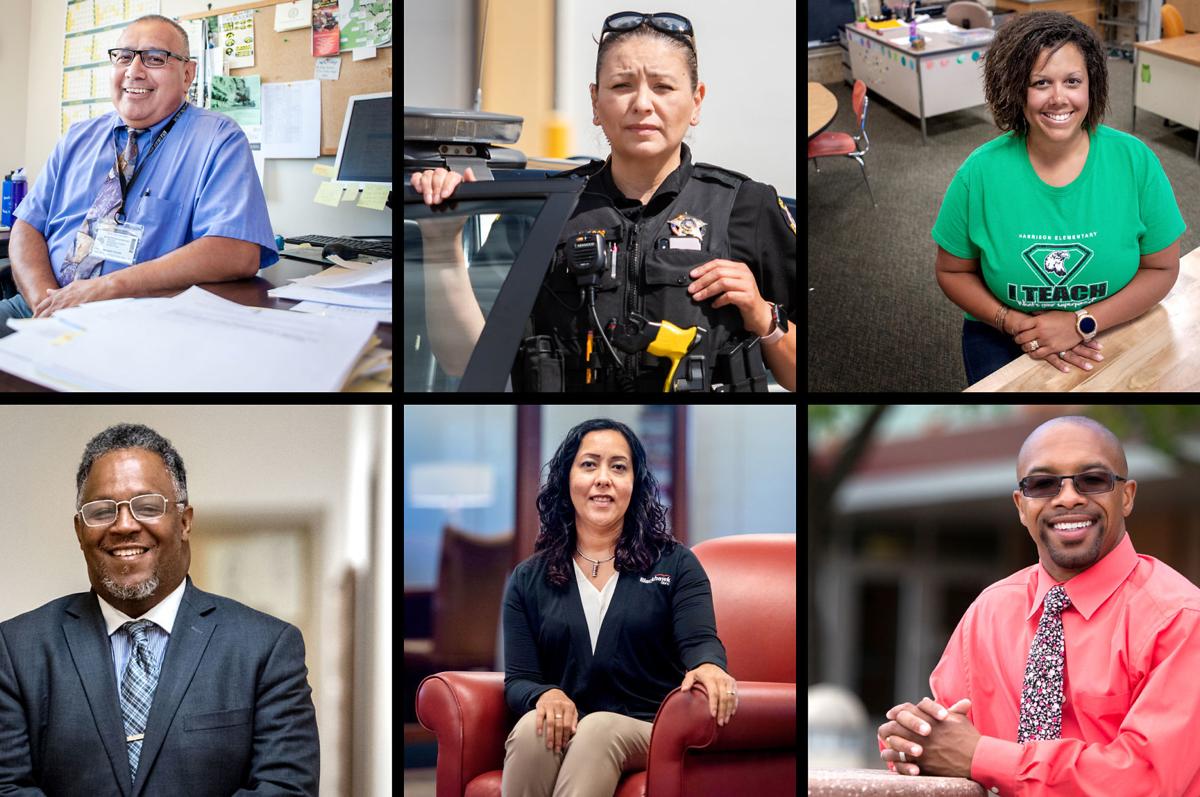 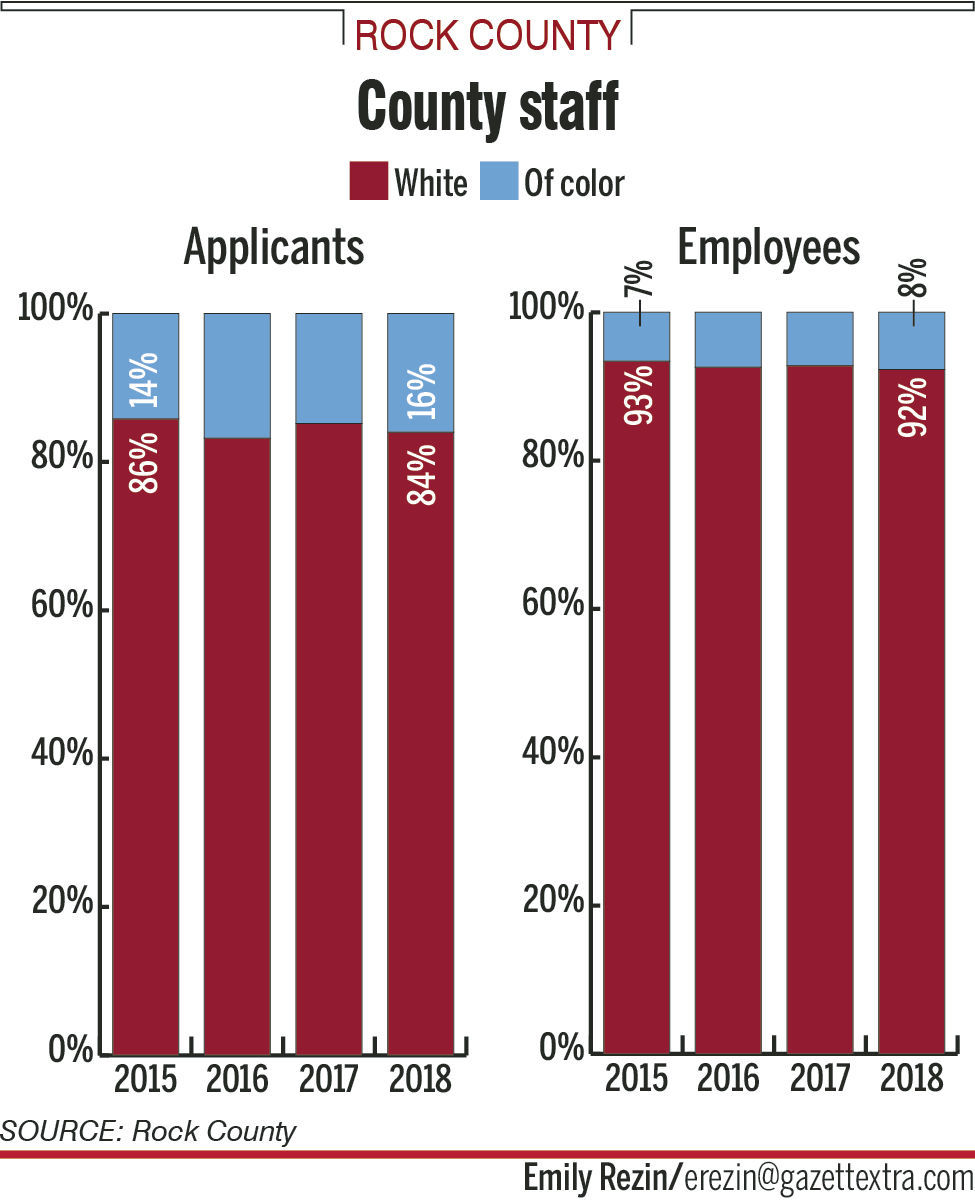 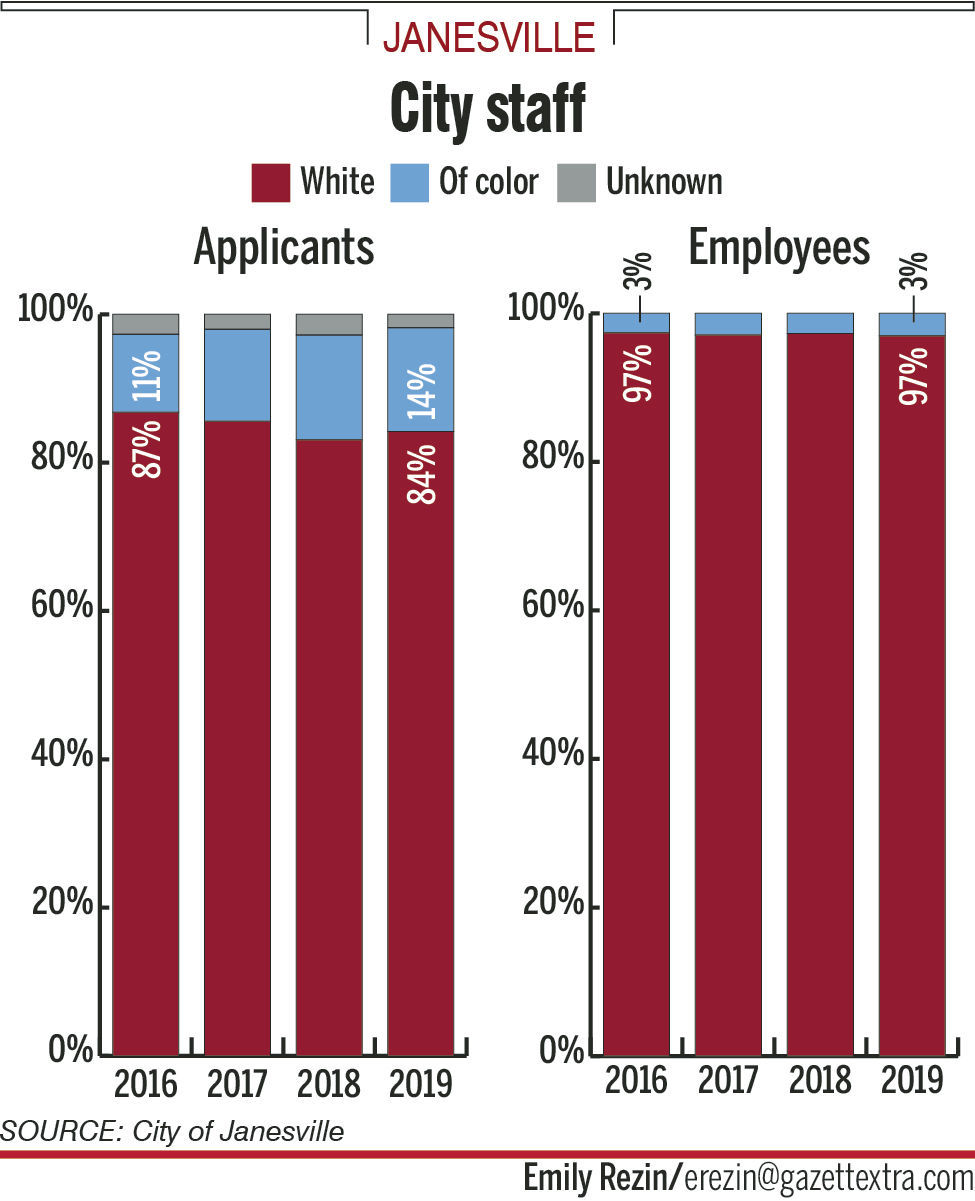 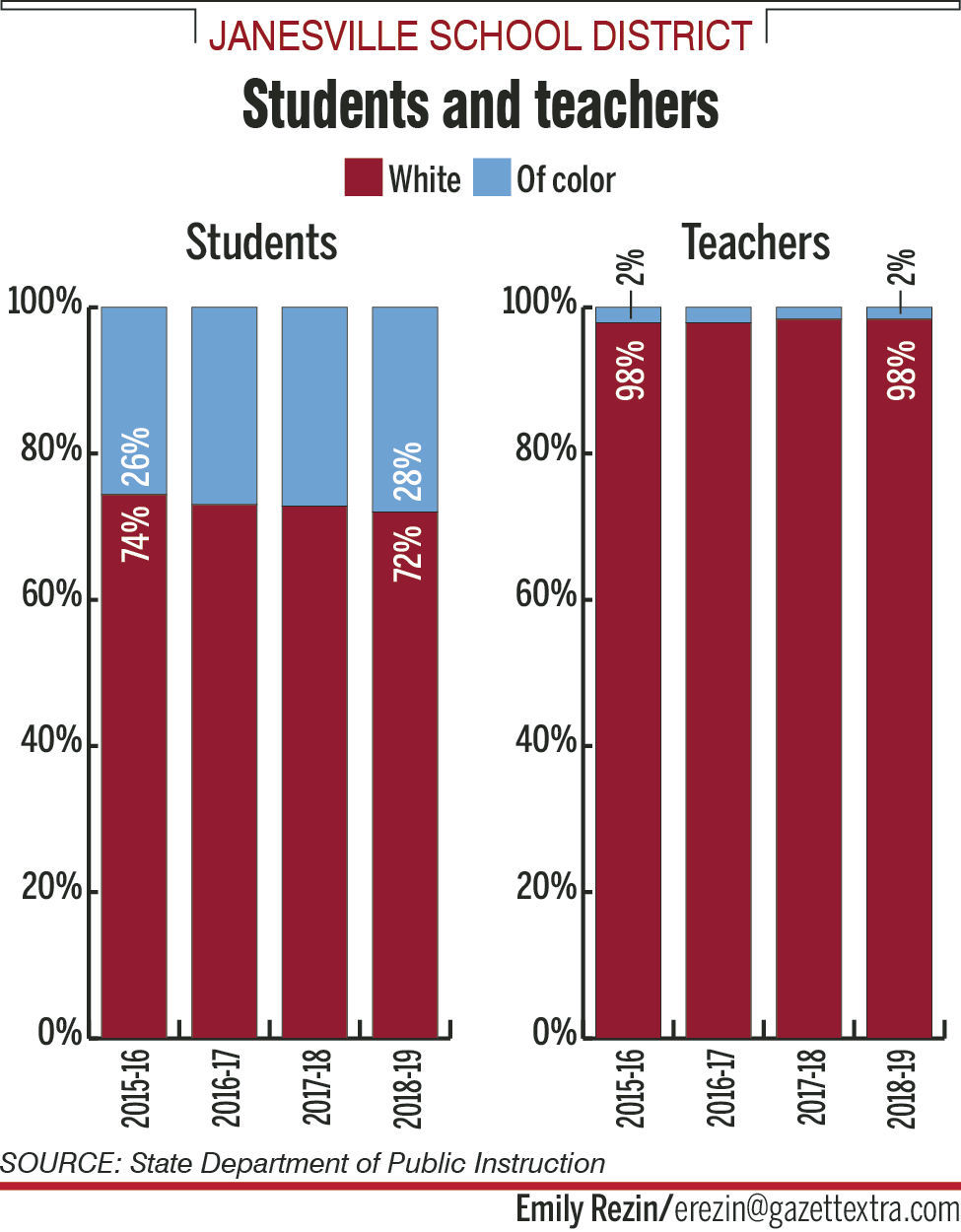 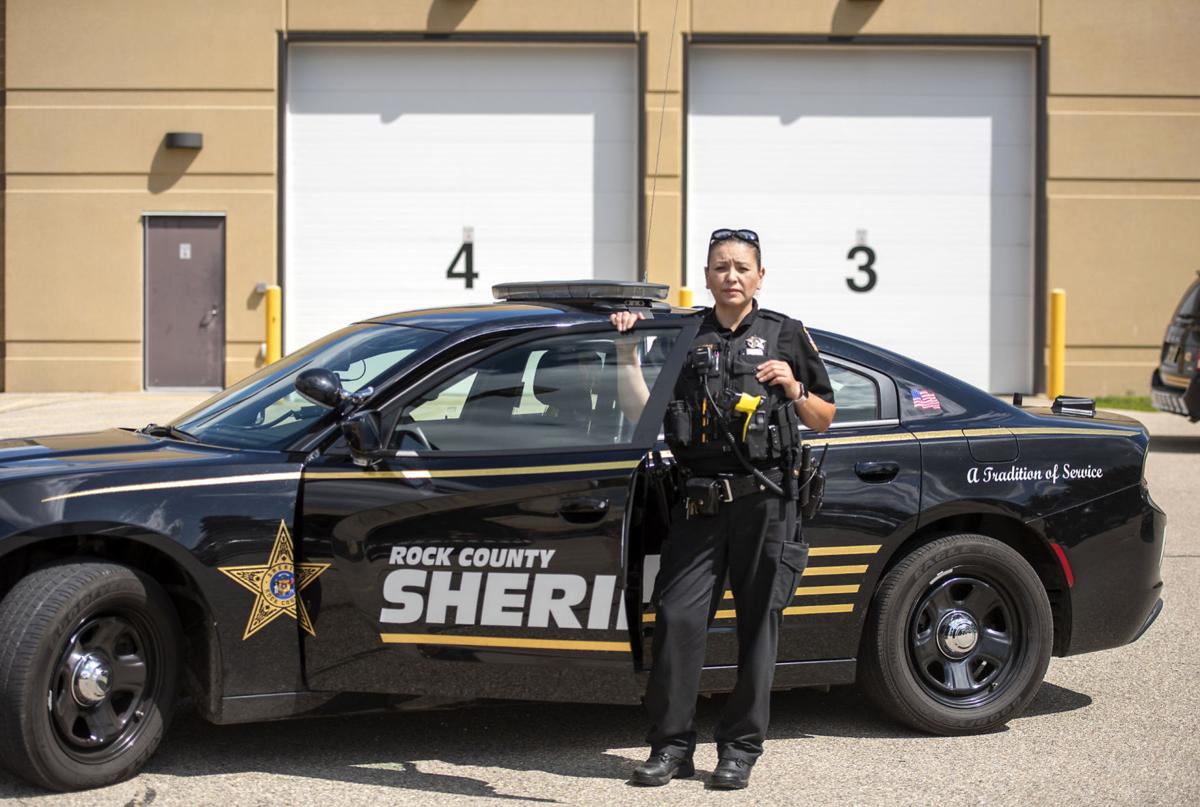 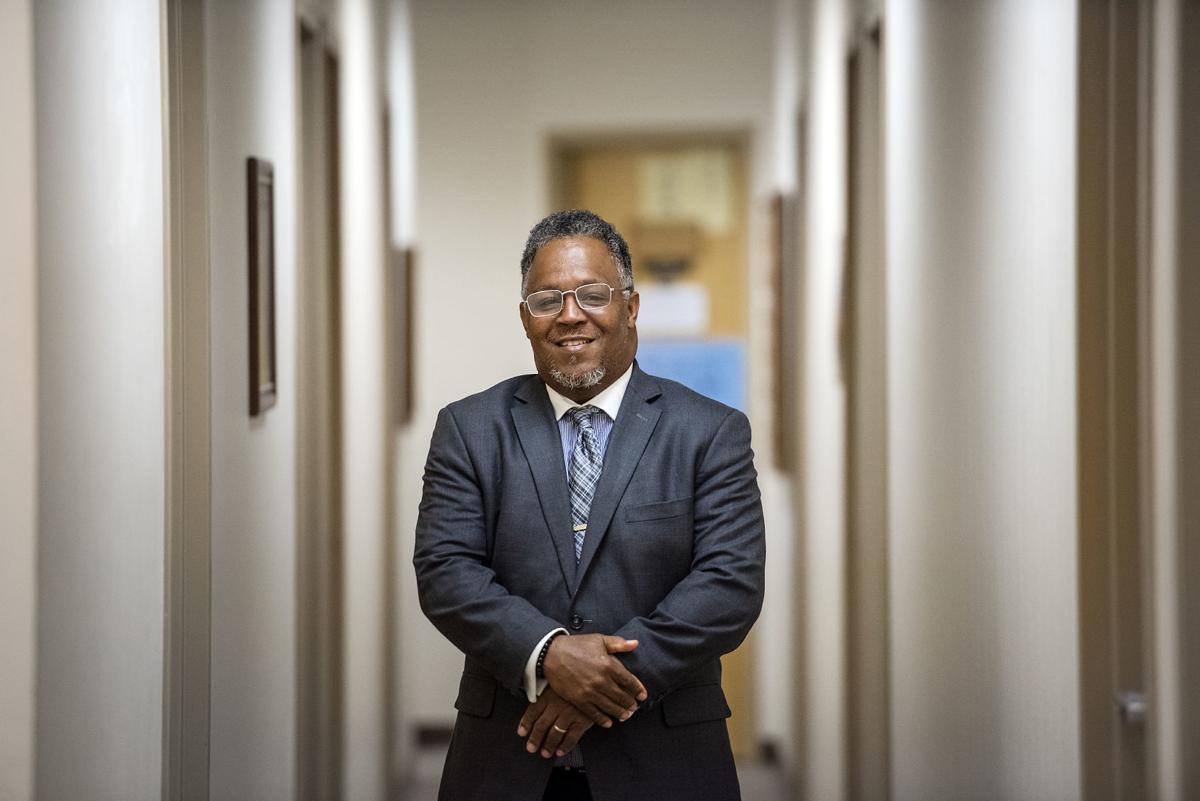 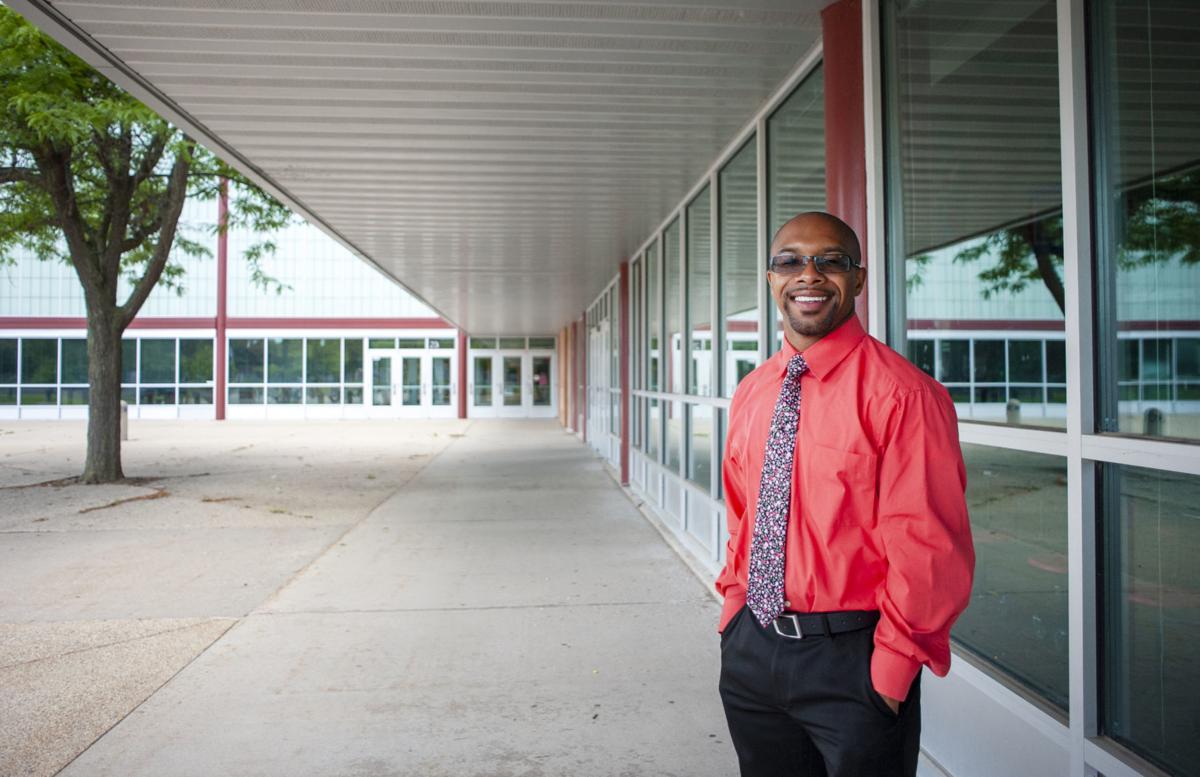 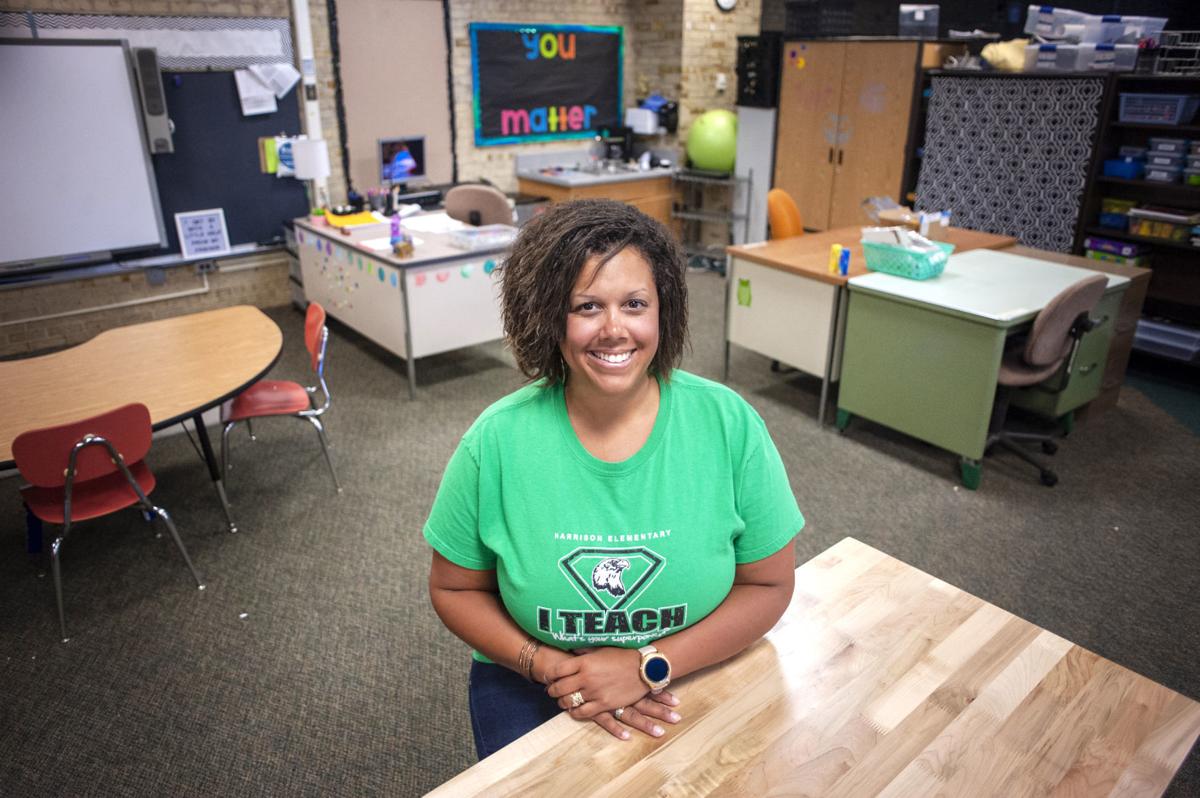 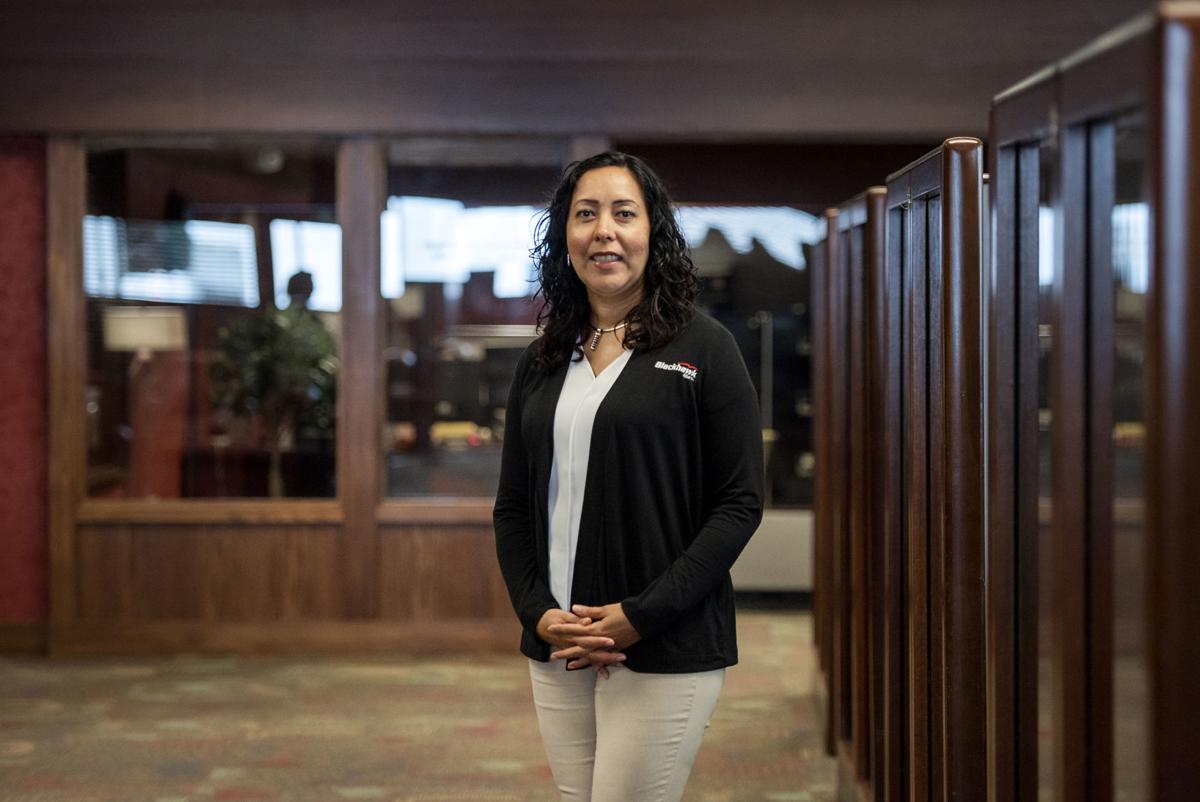 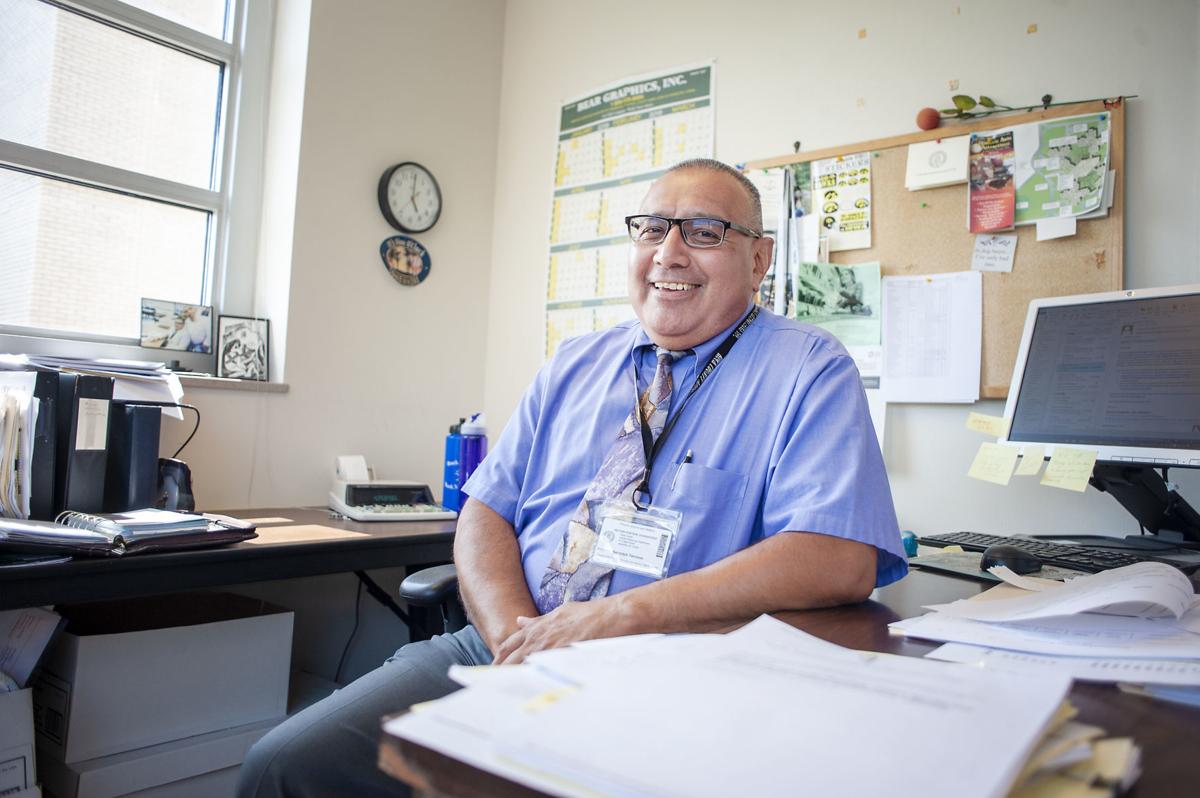 “I felt that there was a need as an African American to stick around, to pave the way. Because if everybody left, change would never happen.”

Today, Evans works as a county diversion supervisor trying to keep kids out of juvenile detention. And he’s one of the biggest advocates for recruiting more people of color and promoting inclusivity within the county workforce.

Across Rock County, public and private sector organizations are making efforts to diversify their staffs to better reflect a changing population. Leaders believe such actions will foster community trust and improve the services they provide.

Demographic data shows the area is slowly becoming more diverse. Rock County was 89.2% white, according to the 2000 census; that number fell to 83.3% white in 2017 estimates.

The Latino population has largely driven the local shift, more than doubling in Janesville, Beloit and Rock County since 2000.

In response, Rock County government has created multiple committees dedicated to diversity and inclusion. The committees ensure employees of all races are involved in major policy decisions, Evans said.

“The more people you can bring together, the better we can be as a whole,” he said. “If I have everyone on my team that looks like me, talks like me, has only my background, then I’m leaving out a lot of expertise that I’m not allowing to come to the table.”

The case for diversity

Diversity can cover many categories, including gender, religion and sexual orientation. This story will focus on race and ethnicity.

Conversations about race in the workplace can leave people feeling defensive because they fear being replaced. But diversity programs aim to “supplement, not supplant,” said Dorothy Harrell, Beloit NAACP president.

Whether at work or within a friend group, people tend to surround themselves with those who are similar. It takes effort to overcome that tendency and to include others of different backgrounds, she said.

More employees of color means an organization is more attuned to the needs of different communities. People might be more likely to frequent a business if those behind the counter look like them, Harrell said.

Even though Rock County’s demographics are shifting, the area is still overwhelmingly white. That can make recruitment more difficult.

YWCA Rock County Executive Director Angela Moore said businesses need to have a rigorous recruiting strategy. Advertise in outlets that cater to audiences of color. Visit ethnic gatherings such as Juneteenth or a Cinco de Mayo celebration, she advises.

Those actions might not directly lead to a new hire, but they at least increase visibility.

“If you’re trying to connect with people, you have to go where they are. That’s just basic,” Moore said. “You can’t stay in your office and say, ‘But they didn’t apply.’”

Retaining employees of color means building an office climate that values everyone’s ideas. A welcoming environment can put people at ease and increase productivity, she said.

Not every organization takes those steps. A company might feel it is sufficient to hire a few people of color for entry-level positions with little opportunity for advancement.

The trainings can be contentious, even among those who voluntarily attend. Comments that question the purpose of diversity and inclusion show there is plenty of work left, he said.

Carfora tries to feature trainers of color such as Billy Bob Grahn, who is Ojibwe.

Grahn said discussions years ago about race helped him dispel what teachers taught him as a child: stay silent about your heritage. Recently, two women of color cried at one of his trainings, showing how cathartic those talks can be, he said.

Carfora said many organizations contact him on a reactive basis—people of color are leaving or there was a racist incident, for example. But some places are now approaching him proactively.

Other organizations have taken their own proactive approaches for years.

Though there are few officers of color within the Janesville Police Department, Chief Dave Moore has worked for the past decade to build a culturally competent workplace.

He helped start African American and Latino advisory committees. All employees, from chief to clerk, receive implicit bias and other trainings to create systemic change, he said.

Janesville has three Latino officers and one Native American officer among its 105-person force. It hired its first black officer a few years ago, but that person is no longer with the department.

There are two black students in the department’s Explorer program, which gives young people an introduction to police work, Dave Moore said.

Building an inclusive department comes first. He is hopeful diverse hires will follow.

“There’s this belief out there that if an organization mirrors the population that it serves, then all of a sudden you’re culturally competent,” Dave Moore said. “That doesn’t guarantee a thing. I believe it is the values of the organization and the cultural competence of the organization which will result in the outcome that the community wants.”

Dave Moore won the YWCA’s 2019 Racial Justice Award for the department’s work. The YWCA also distributes awards for diversity in local workplaces, which most recently went to Agrace Hospice and Palliative Care in 2018.

The company has multiple scholarship programs for those looking to start or advance their nursing careers. The programs focus on people of color, said former Diversity Manager Brenda Gonzalez, who left Agrace this month after four years.

Agrace recently started internship programs that cater to UW-Madison students of color. It also has developed partnerships with local Hmong and Ho-Chunk leaders, among others, she said.

Gonzalez said she always felt valued and welcomed as a Latina woman during her time at Agrace.

Another Latina woman has led diversity and inclusion efforts for almost 20 years at Blackhawk Bank, which won the YWCA’s 2017 award for workplace diversity. Francisca Reyna, vice president of business development and education, said much of the bank’s cultural competence efforts are aimed at building client trust.

There are cultural differences between ethnic groups when it comes to banking. Some don’t trust banks. Others bring the entire family to consult about major financial decisions, Reyna said.

Diversity and inclusion is hard work, but it pays off. When stateline-area companies hire executives from other countries, they often recommend the new hires bank with Blackhawk, she said.

“Recruiters have picked up on the fact that we’re really good with diversity. Why else are we getting these referrals?” Reyna said. “We’re kind of like a gatekeeper when people come in.”

Reyna said change at Blackhawk didn’t happen overnight. She received some pushback when she was hired before the company culture evolved.

Every organization is at a different stage of such evolution.

The city of Janesville has made incremental gains with hiring more people of color. The city workforce went from 2.6% employees of color in 2016 to 2.9% in 2019.

Human Resources Director Sue Musick said the city values having diverse perspectives within its government, but with low unemployment, it can be difficult to find qualified applicants.

New city workers are required to pass an online diversity and inclusion quiz before they complete their hiring paperwork. Returning city workers receive cultural competence training each year on multiple topics, including diversity, she said.

If employees cannot attend a training, they are supposed to watch a recording of it online. There is no check to know whether a worker watched the video because completion is on the “honor system,” Musick said.

The city declined to connect The Gazette to a city employee of color.

At the Janesville School District, teachers of color have decreased from 2.1% to 1.6% since 2016. Meanwhile, students of color now comprise 28% of enrollment, according to the state Department of Public Instruction.

Those who complete the program, if hired by Janesville, must remain in the district for at least three years.

Daniel Jackson, who identifies as a Black American, and Nikki Tourdot, who is biracial, were two early recipients of the scholarship and remain in the district. Both grew up in Janesville and have no plans to leave.

Tourdot has advocated for ways to recruit teachers of color beyond the scholarship program. Some of her suggestions include partnerships with area colleges or giving incentives to teachers who refer applicants of color to job openings.

Tourdot, a second- and third-grade teacher at Harrison Elementary, wanted to be a teacher since she was little. But without teachers who look like them, some students might disregard teaching as a potential career path, she said.

Jackson, the dean at Marshall Middle School and a former Edison teacher, said it would have been nice to see more teachers of color when he was a student. It would have given him more role models.

He’s now on the board that awards the multicultural scholarship. Applicants who want to return to Janesville reflect a welcoming district atmosphere, he said.

“I think it’s pretty phenomenal. You’re building these students of color up that already had bases in this district,” Jackson said. “It’s cool to see the passion these younger kids are bringing to the program and their desire to come back and to help their community for the long haul.”

Assistant to the County Administrator Randy Terronez said the county has ramped up cultural competence initiatives. Those include multiple diversity committees, cultural heritage events and regular talks about race.

An inclusive environment creates positive word of mouth in the community, which is often the most powerful recruitment tool for any organization, he said.

Terronez, who is Latino, has spent 40 years working in county governments in Iowa, Michigan and Wisconsin. He typically stayed at a job for six or seven years before leaving because he didn’t feel welcomed, he said.

Deputy Sheriff Maria Amador received the award in April. Amador is a native of Mexico who has worked at the county sheriff’s office for about 15 years.

Amador said she feels welcomed in Rock County. She’s an interpreter, Hispanic liaison officer and a regular presence at community events. People know her and feel comfortable approaching her.

Not everybody likes hearing about diversity and inclusion. That’s OK, she said. What’s important is that people at least try to accept other cultures amid a changing population.

“If we don’t become more inclusive and more understanding, I think it’s just going to be a failure on our part,” Amador said. “I think all employers need to take that into consideration because, you know, we’re here.

“Diversity is here. The melting pot is growing. It’s not going to go anywhere.”