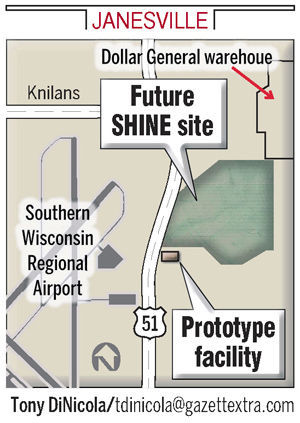 SHINE Medical Technologies’ prototype facility, Building One, didn’t get its name merely by being the first facility the company built across from the Southern Wisconsin Regional Airport.

It’s called “Building One” because SHINE wants it to be a genesis site for new nuclear technology, SHINE CEO Greg Piefer told the Janesville City Council on Monday.

SHINE is well on its way to building a medical isotope production facility in Janesville. The isotopes will be used in bone and tissue scans to detect anomalies.

In August, the company broke ground on Building One, which will show potential investors SHINE’s capabilities before construction of the full-scale facility begins.

Occupancy of Building One is expected in January, which is a short delay from the company’s original estimated occupancy date of late December, Piefer said.

“No project is without a few snags, but this one’s coming along nicely,” he said.

Piefer said the project will be the most advanced private nuclear technology center in the country. SHINE hopes it will be the birthplace of new technology and nuclear science advancement.

“It’s really going to be something special, so we’re excited about that,” he said.

SHINE is in the final stages of planning the construction of its full-scale facility, which will be adjacent to Building One. Construction will begin in the second quarter of 2018 and be complete by late 2019, Piefer said.

Piefer expects the development of the facility will require local “spin-off” businesses to support SHINE. The standard, go-to guys in the nuclear field are “corrupt,” so local support is preferred, Piefer said.

Isotopes SHINE will produce at the facility are in high demand, but supply is dwindling.

A Canadian facility shut down late last year, and the United States imports most of its isotopes from the Netherlands, increasing costs. The isotopes decay at a rate of 1 percent an hour, meaning they can’t be stockpiled and are in constant demand, Piefer said.

SHINE relocated to downtown Janesville in late 2016 with 35 employees. Now 55 employees work there, and SHINE will hire another wave of 15 before the end of the year. SHINE expects having more than 150 employees by the time the plant opens, Piefer said.

Fundraising is gaining momentum, he said. The Janesville City Council in June approved amending a tax increment financing deal with SHINE to provide the company an additional $1.5 million.

“It’s been a long road, and it’s really neat to see these things coming out,” Piefer said.

SHINE to break ground on prototype

SHINE Medical Technologies is holding a ceremony next week to tout its breaking ground on a prototype it has said would be a catalyst for a future, full-scale nuclear radioisotope facility in Janesville.