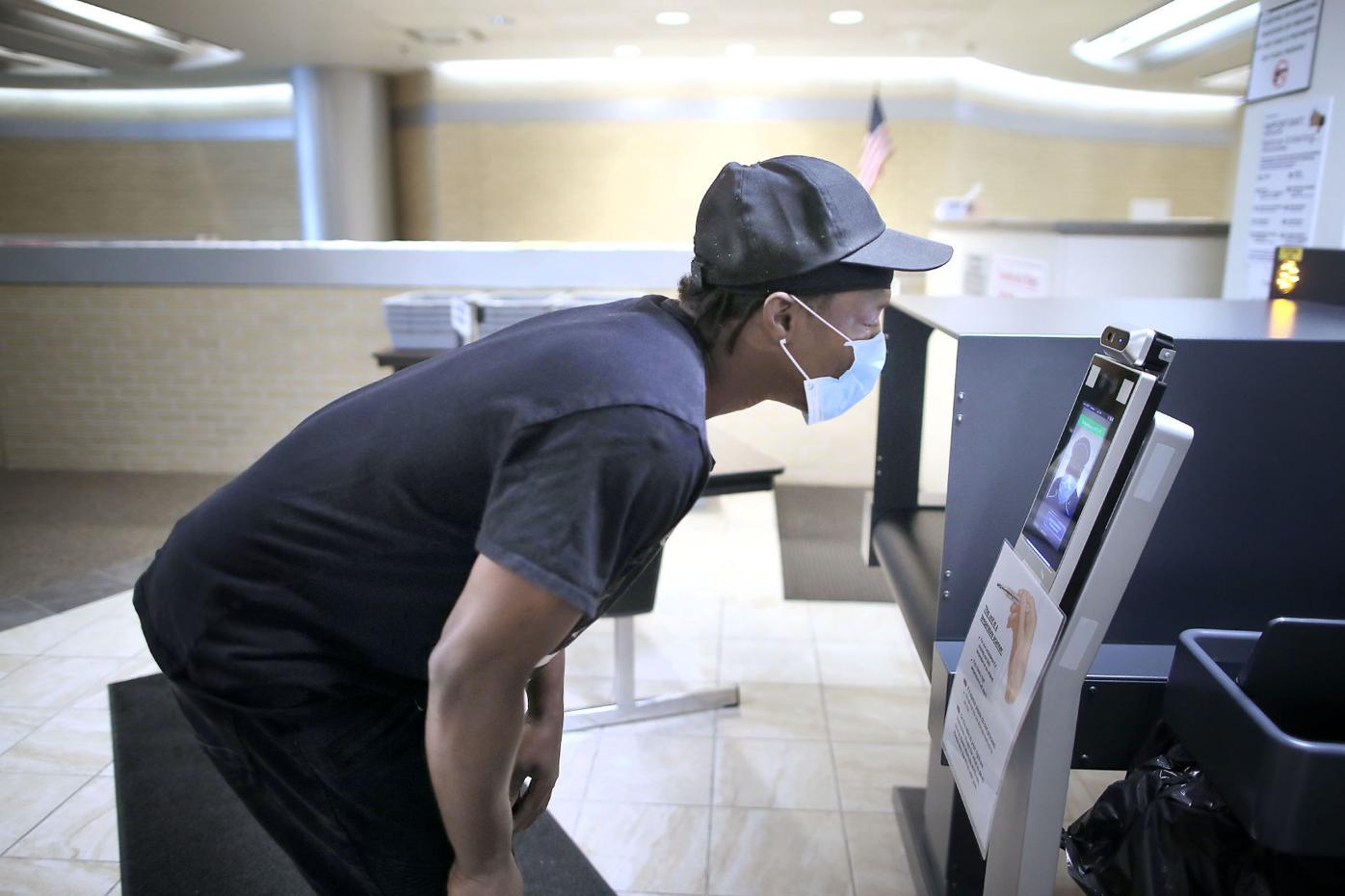 Mario Rice has his temperature taken by a new free-standing temperature kiosk before entering the Rock County Courthouse on Tuesday afternoon. The kiosks are among the measures implemented to protect against spread of the coronavirus. 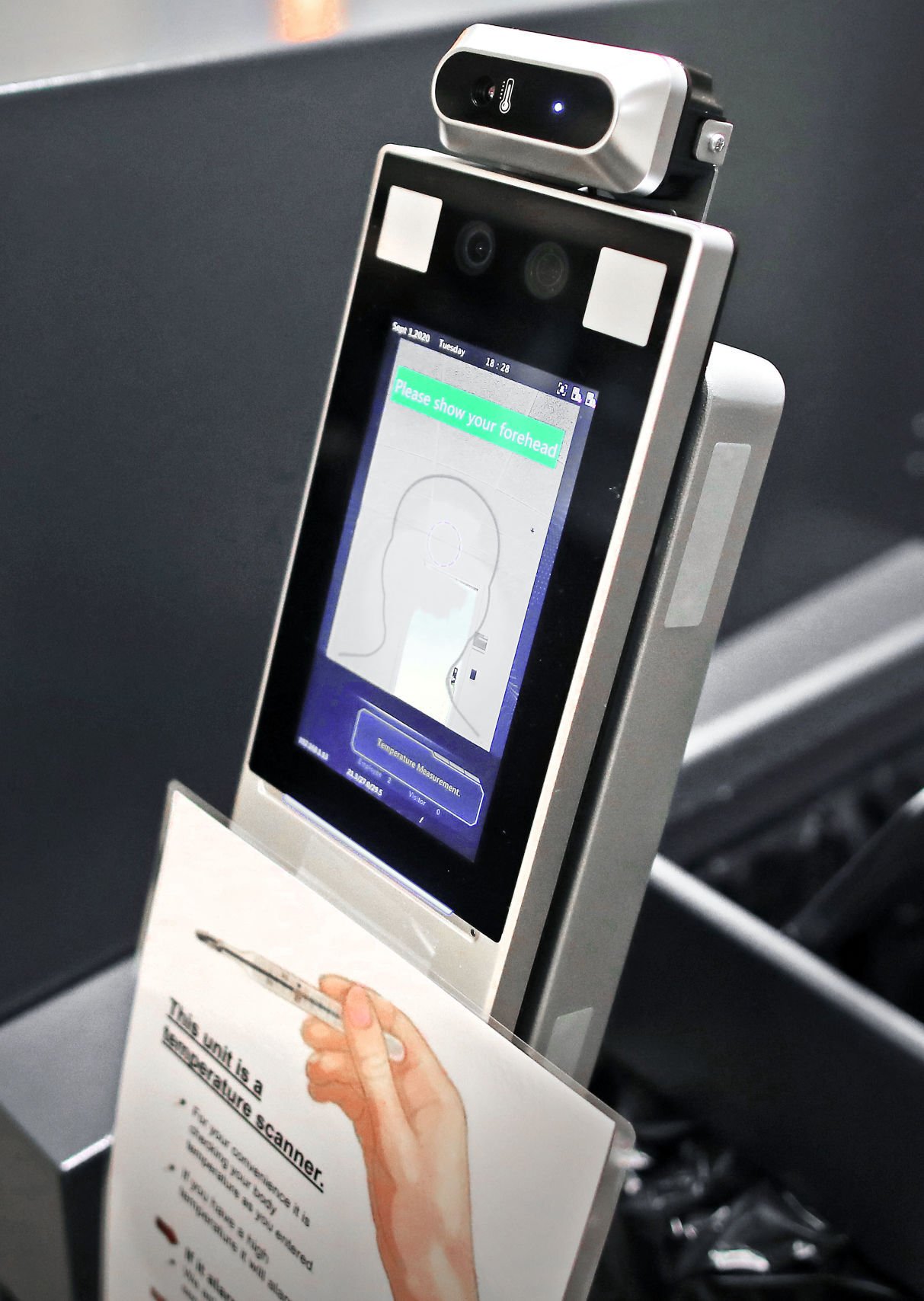 Visitors to the Rock County Courthouse must use a new free-standing temperature kiosk before entering the building.

Mario Rice has his temperature taken by a new free-standing temperature kiosk before entering the Rock County Courthouse on Tuesday afternoon. The kiosks are among the measures implemented to protect against spread of the coronavirus.

Visitors to the Rock County Courthouse must use a new free-standing temperature kiosk before entering the building.

Rock County judges have decided to ease back toward normal operations after more than four months when nearly all court hearings were either postponed or held using the Zoom conferencing app.

Some hearings will now be held in person, despite the ongoing coronavirus pandemic.

The judges determined that as of Monday, they had met the benchmarks they set in their reopening plan.

Those benchmarks include courthouse preparations such as hand sanitizing stations, signs indicating social distances, installation of see-through plastic panels, air purifiers and arrangements for all courtroom surfaces to be sanitized between hearings.

While most hearings still will be conducted remotely, the hearings that might be in person include pleas and sentencings, juvenile case dispositions and some other juvenile matters, injunction hearings, family law matters involving contested placement or custody, mental commitment and guardianship hearings with time limits and cases involving interpreters.

“Parties, attorneys and other participants should continue to appear at hearings by Zoom videoconferencing unless notified by the court to appear in person,” the announcement reads.

In-person hearings might involve a combination of in-person and remote appearances, if some participants have legitimate health concerns, Hanson said.

“We will seriously consider those requests because we understand the concerns that people have right now,” Hanson said.

Jury trials have been on hold since late March. A separate plan for jury trials will be announced soon, with trials resuming Oct. 5, Hanson said.

Hanson said defendants have the right to in-person hearings, and a small number have decided they want that, so those postponed hearings will be scheduled as quickly as possible.

Anyone attending a hearing must wear a mask and read the self-screening questions posted at the entrance to the courthouse.

The slow reopening of the courts is not necessarily the start of a complete return to in-person hearings. The judges’ plan states that the courts might revert to all remote hearings if circumstances, such as a sudden increase in COVID-19 cases, change.

If conditions improve, judges could decide to move to Phase 3, in which most hearings would be in person.

Phase 3 will happen only if the county health department decides to enter its own Phase 3. The county is now in Phase 2.

The clerk of courts will start offering limited in-person services in the near future, but counter service will still not be available, said Clerk of Courts Jacki Gackstatter.

As Rock County sets records for COVID-19 cases, hospitalizations and positive test rate, the county’s judges have decided to again put a “pause” on holding jury trials until Nov. 9 at the earliest.