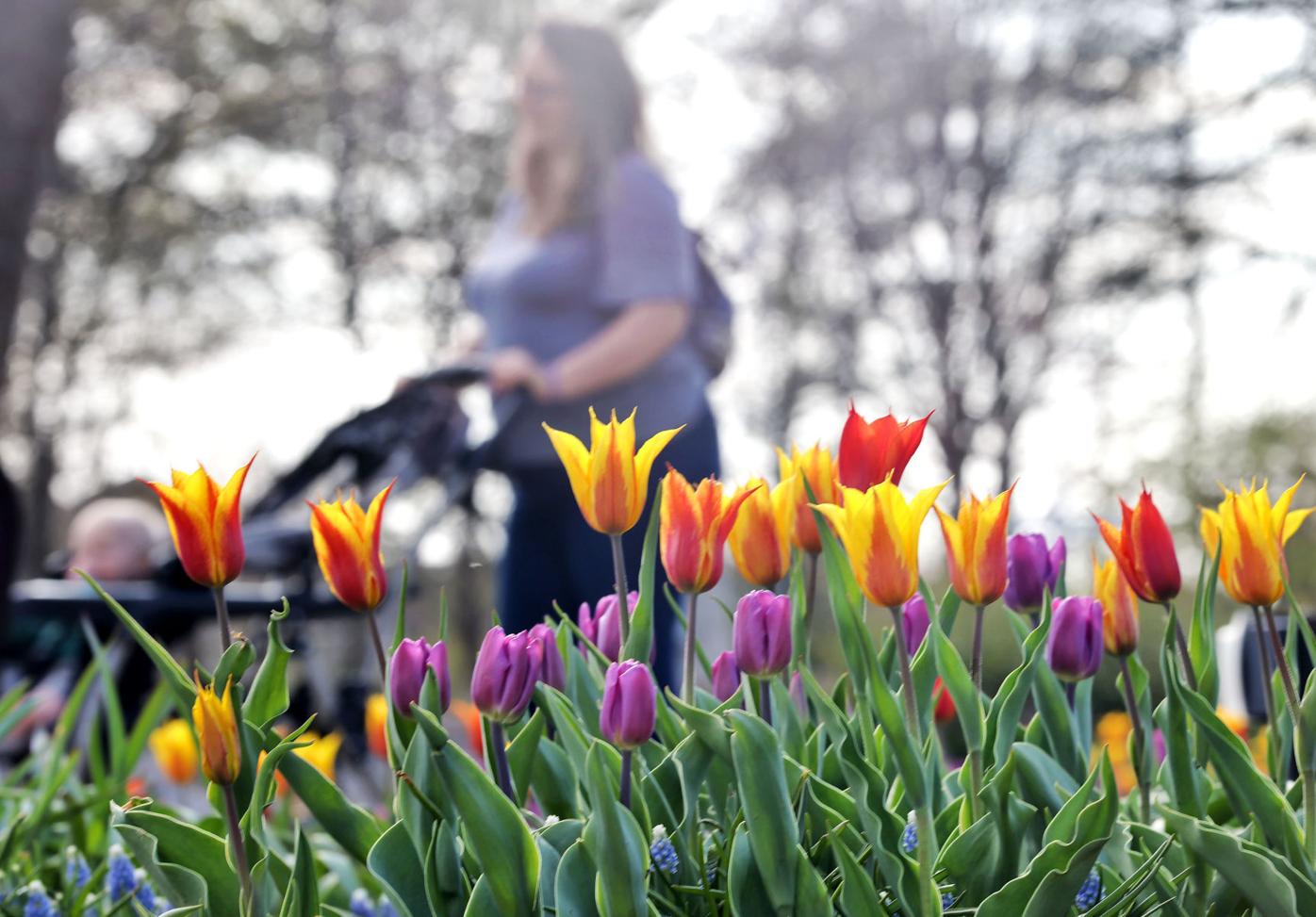 Colorful tulips appear in the foreground as Danielle True walks her children to an area of Rotary Botanical Gardens set up with an activity for children during an Earth Day celebration on Thursday, April 22. 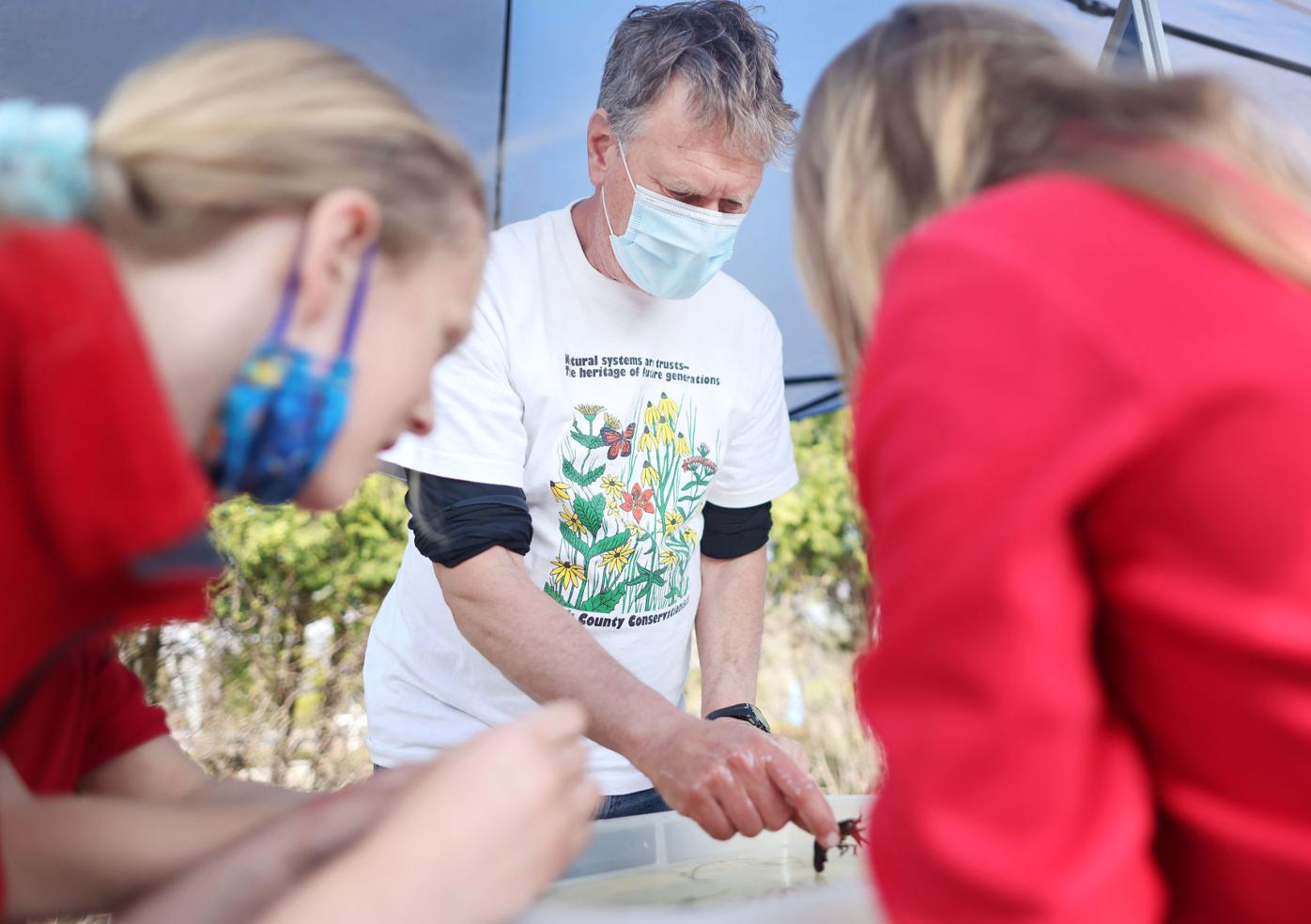 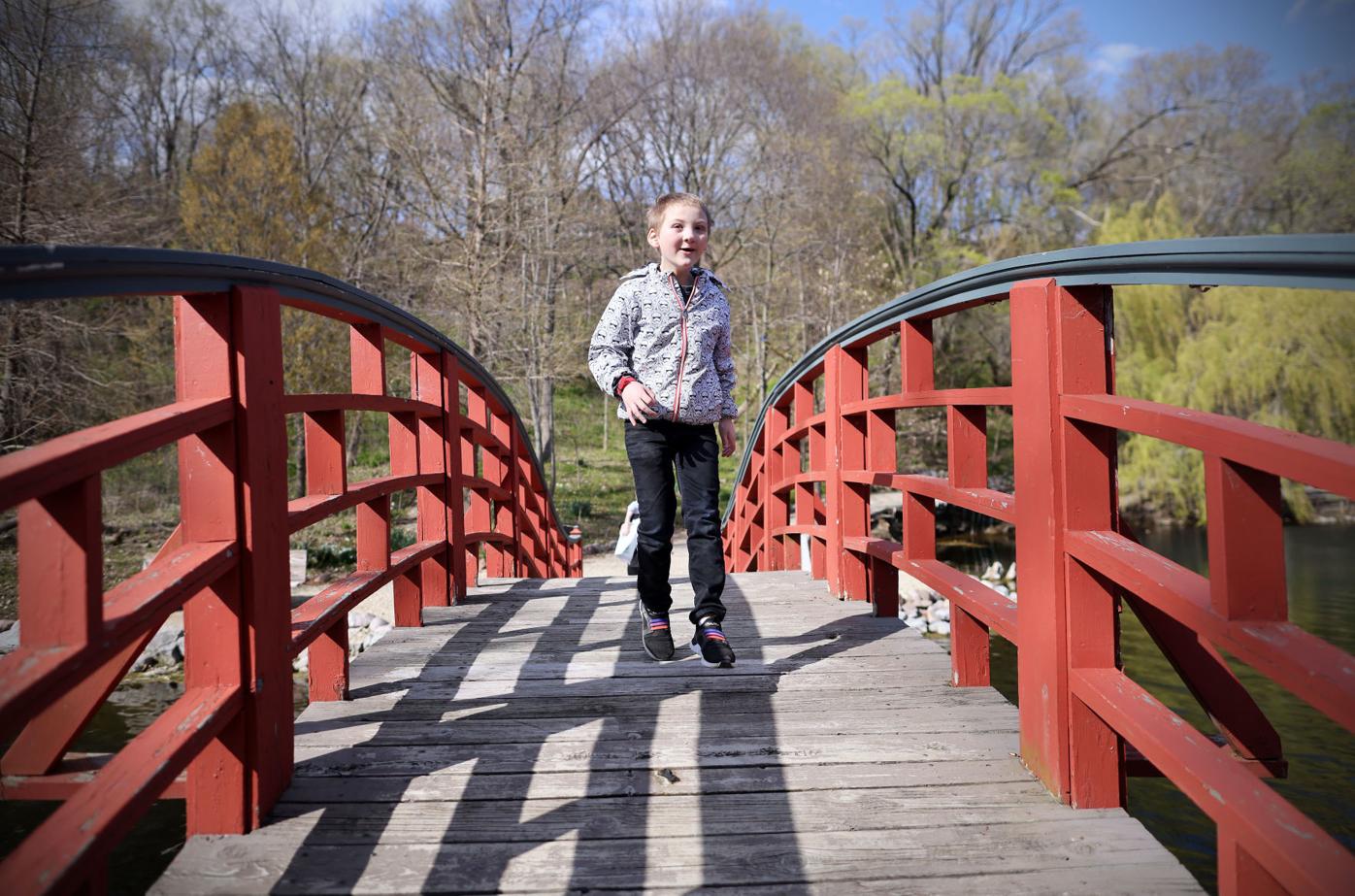 Nicolai Hallet, 7, hops along the arched bridge with his mother and brother trailing behind during an Earth Day celebration with activities for children at Rotary Botanical Gardens in Janesville on Thursday. Also Thursday, a group of officials discussed how a cleaner environment would reducing city carbon emissions would reduce costs in future generations.

Colorful tulips appear in the foreground as Danielle True walks her children to an area of Rotary Botanical Gardens set up with an activity for children during an Earth Day celebration on Thursday, April 22.

Nicolai Hallet, 7, hops along the arched bridge with his mother and brother trailing behind during an Earth Day celebration with activities for children at Rotary Botanical Gardens in Janesville on Thursday. Also Thursday, a group of officials discussed how a cleaner environment would reducing city carbon emissions would reduce costs in future generations.

The Janesville City Council voted in February to help fight climate change and save money.

A group of people from around the area who worked on that council resolution got together Thursday to talk about the complexities of doing both.

One thing was clear: Janesville will not be on its own. Other cities, government agencies and businesses are working on the problem, and Janesville is behind some, such as Eau Claire, speakers said.

“Never in our history has it been so clear to so many that we need to make a change,” said Megan Levy of the state Office of Energy Innovation.

The virtual Earth Day gathering was sponsored by the local League of Women Voters, the Welty Environmental Center and the Ice Age Trail Alliance.

One of the entities working on the problem is a huge producer of carbon dioxide: Alliant Energy. Alliant has set a goal of reducing carbon dioxide emissions by 50% by 2030 from 2005 levels, Alliant’s Jeff Hanson said.

The utility also is working to decommission coal-fired electricity plants by 2040 and to reach net zero carbon emissions by 2050 in its energy production.

Alliant’s investors and customers are calling for those changes, Hanson said.

“We’re putting all the chips into the middle of the table to figure out how to get there,” Hanson said. Among those chips is heavy investment in solar and wind energy.

The Janesville council’s resolution called for reaching carbon-neutral emissions by 2050.

Carbon dioxide is a major force in heating the atmosphere. The effects, scientists predict, include harsher storms, floods and droughts along with rising sea levels that could combine with the more intense weather events to change our way of life for the worse.

City Operations Director Maggie Darr said one thing the city is considering is a solar farm atop closed portions of the city landfill.

The problem, Darr said, is cost. The city struggles each year to maintain its services while receiving less in state shared revenue than its peer cities. At the same time, state law limits how much municipalities can raise through property taxes.

Some new federal infrastructure spending could help, Darr said, but details of what the money could be used for are still lacking.

Dan Cunningham of Forward Janesville, the local chamber of commerce, said if Janesville can reach its goal, the city could use carbon neutrality to set itself apart in the ferocious competition to attract new employers.

Cunningham said he doesn’t know what Janesville companies are doing to lessen their carbon footprints, but he plans to survey members to find out.

“Obviously the business community is going to have to contribute to this to make the effort work,” Cunningham said.

Several speakers talked about small steps that could add up.

Andy Stoltman of the Department of Natural Resources described Eau Claire’s program that sends cut-down trees to local companies that make things out of wood so the trees don’t end up getting chipped. The result, he said, are durable goods that store carbon for a long time—not to mention the idling of chippers that emit a lot of greenhouse gas, Levy added.

Janesville’s landfill and the city’s fleet of vehicles emit a lot of carbon dioxide, Darr noted. But cost is again an issue. Converting the city’s fleet to electric vehicles would cost money. The city does capture a portion of biogas emitted from the landfill but not all of it.

Cunningham said the city will have to increase the availability of electric car charging stations as the number of such cars goes up.

“It’s important to stay out ahead because we don’t want to be left behind in that,” he said.

Wes Enterline, sustainability director at UW-Whitewater and a Janesville resident, noted that UW-Platteville just installed a solar array. He said UW-W’s problem in the past year has been a lack of funding as a result of pandemic-driven enrollment decreases.

Darr said she understands that investments now could save energy and costs for future generations—but oh, those costs.

“We are kind of fighting for what programs we do have to consider cutting this year in order to make our budget balance,” Darr said. “Some of these long-term investments get put to the wayside, unfortunately.”

Darr got tips from forum participants on where grants might be found. The forum’s biggest impact might come from the information-sharing that occurred as speakers suggested grants and planning resources.

Stoltman, from the DNR, told of a proposed increase in the state budget for tree planting and a state map that shows the degree of tree cover in a city.

Trees provide shade, reducing energy consumption; absorb water that otherwise would run off into rivers or streams; and take carbon dioxide from the atmosphere via photosynthesis.

Poorer parts of a city tend to have less “canopy,” as it is called, but the map could show officials where to target tree-planting efforts, Stoltman said.