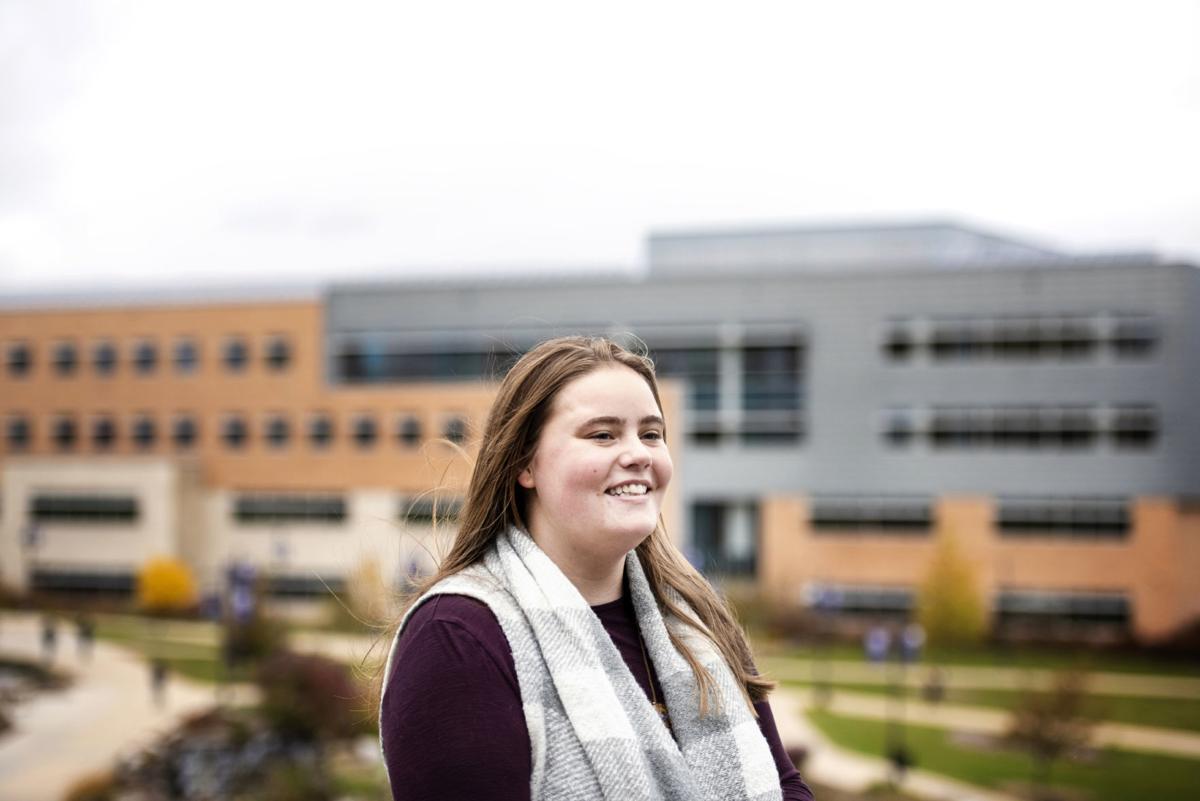 Kelsey Pacetti is president of the UW-Whitewater chapter of Active Minds, which works to start conversations about mental health through events, discussions and meetings. 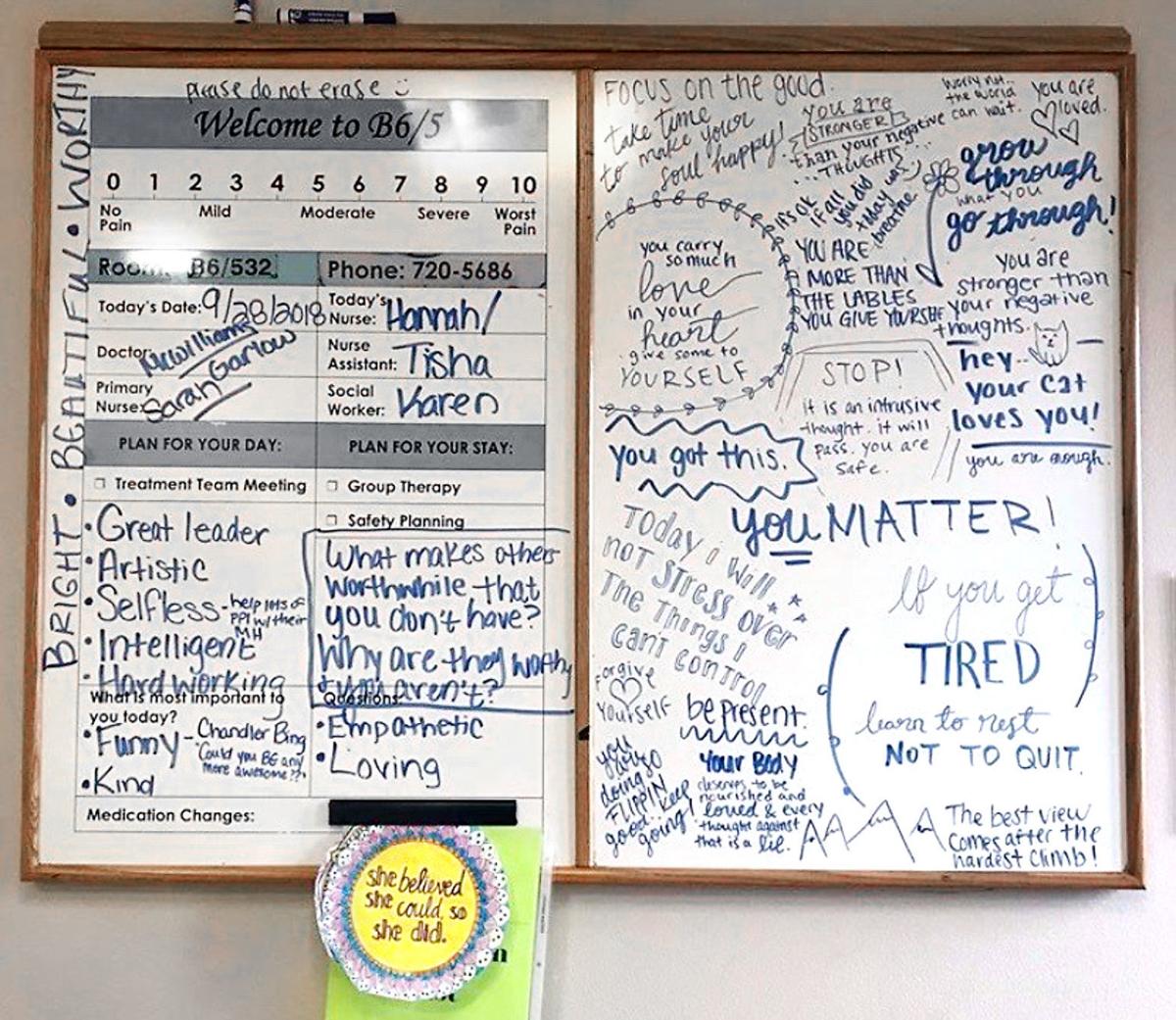 A nurse wrote messages to Kelsey Pacetti on a whiteboard in her room every day during her recovery in 2018. She said she was able to stay positive during this time because of the actions of some of her psychiatrists and nurses. 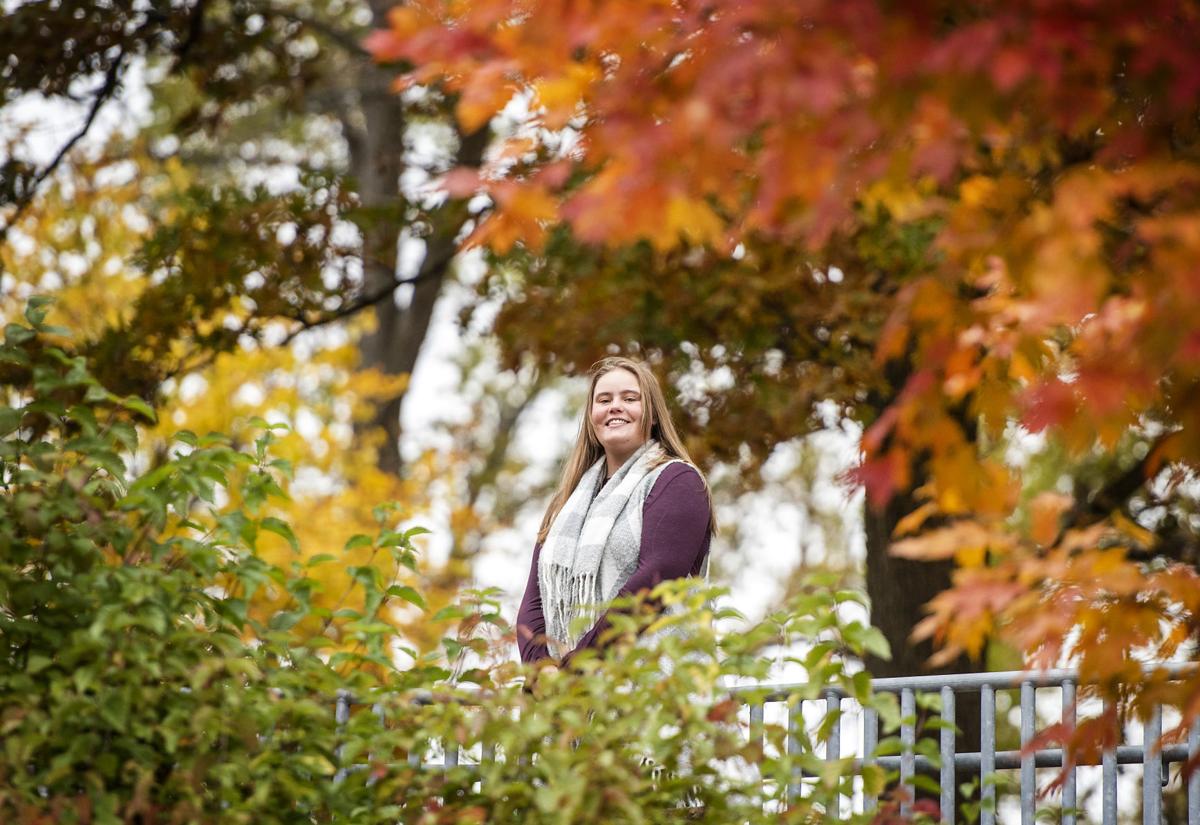 Kelsey Pacetti said she used to be depressed and have suicidal thoughts 90 percent of the time. Now it’s closer to 10 percent, and she wants others to know the fight is worth it.

Kelsey Pacetti is president of the UW-Whitewater chapter of Active Minds, which works to start conversations about mental health through events, discussions and meetings.

A nurse wrote messages to Kelsey Pacetti on a whiteboard in her room every day during her recovery in 2018. She said she was able to stay positive during this time because of the actions of some of her psychiatrists and nurses.

Kelsey Pacetti said she used to be depressed and have suicidal thoughts 90 percent of the time. Now it’s closer to 10 percent, and she wants others to know the fight is worth it.

Kelsey Pacetti could hear the sirens as panic and regret set in.

Help was on the way, but it needed to arrive sooner.

Pacetti, then a freshman at Eastern Michigan University, had consumed two bottles of antidepressants in a suicide attempt. Feeling immediate regret, she told her resident assistant, who called 911.

The sound of the sirens intensified, but the sickness and pain grew. Pacetti wasn’t sure if she was going to survive.

“It was an irrational choice that spurred out of the moment,” said Pacetti, now a junior at UW-Whitewater.

As knowledge of mental health issues grows, the University of Wisconsin System and UW-Whitewater are working to improve services and help those struggling.

Crisis counseling appointments have increased at UW-Whitewater. Nearly 200 students had appointments last school year, up from fewer than 150 five years ago.

Suicide is the second-leading cause of death among college students. It’s a problem new UW Board of Regents President Andrew Petersen hopes to address.

“It’s also time we take a closer look at behavioral health on our campuses,” Petersen wrote in an August opinion column in The Gazette.

Petersen said he has two teenagers of his own and understands the stress students are under. As president, he hopes to help students combat mental health issues.

“The board of regents is examining and analyzing the increasing level of stress-related anxiety on our campuses, and one of my initial priorities is to make sure all of our campuses are employing best practices, both operationally and financially, to help campus communities succeed in combating this unfortunate epidemic,” he wrote.

At UW-Whitewater, others are doing their parts.

Chancellor Dwight Watson told The Gazette in August he wants to ensure the university has “solid” counseling services and wants students to have 24-hour access to counseling. He wants to fight the stigma around mental illness and help students see that it’s OK to seek help.

“I think I also want to make sure that counseling and support is more conversational and not necessarily problematic. If you have an issue and you want to discuss something with them and help unpack that, you should be able to just meet with someone and talk about those. I don’t want it to be stigmatized in any sort of way,” he said.

He said the campus is focusing on accessibility and trying to be more available to students in a timely manner.

“We don’t want to only operate in a crisis. We want to also make sure that there’s preventive and supportive aspects of mental health counseling,” he said.

Active Minds is a nationwide movement on college campuses to bring the topic of suicide and mental health to light.

Pacetti is president of the UW-Whitewater chapter of Active Minds, which tries to spread the conversation on mental health through events, conversations and meetings.

One of the reasons she transferred to UW-Whitewater was because it has Active Minds.

“We’re trying to fight that stigma ... by really starting and changing the conversation about mental health,” Pacetti said.

Pacetti said the group is an open community, and members help each other however they can. Not everyone in the group has a mental illness, but they still educate people.

The group recently held its annual Send Silence Packing event, which put hundreds of backpacks in front of the University Center to share stories and spread awareness.

Jen Purcell is student government president and a member of Active Minds.

Purcell said she battles depression, anxiety and post-traumatic stress from a sexual assault.

“There’s no shame in struggling because mental illness doesn’t discriminate against anyone,” she said.

“It (mental illness) doesn’t care how busy you are, how much of a leader you are, how much people depend on you. You have to put your mental health first … it’s just as important as any other aspect of health,” Purcell said.

Whitewater student government recently passed a bill to create a mental health committee. A panel of administration, students, faculty and mental health professionals will meet once a month to analyze campus resources and statistics.

“I feel like Whitewater’s taking a lot of the right steps to break the stigma around mental health,” Purcell said. “We have resources, but we still need more.”

Starting this month, the campus will employ a mental health nurse practitioner. The new position will focus on seeing students with mental health issues, implementing programming on the topic and writing prescriptions for mental health medication.

The practitioner will be on campus once a week, but health services Director Julie Martindale hopes that becomes three days a week by the end of the year. Martindale said the position was made to address the growing concern over mental health.

“My opinion is that we’re starting to knock down that stigma about going for help, so more and more people are actually reaching out about needing help.”

She said the literature is mixed on what is causing the increase.

“In the college environment, absolutely we’re getting more and more patients reaching out to us for help. Whether that means there’s more issues or not is debated.”

The university is sending a counselor to the Janesville campus a few days a week and hopes to have a nurse practitioner there by next year.

Martindale said the university is looking at counseling over the internet, especially late at night. Martindale is part of a group the UW-System has put together to look at the future of mental health, and she expects an expansion of services in the coming years.

“It is not just a focus of UW-Whitewater to look at what we offer for mental health services, but it is a focus of the UW-System, and I think that’s very important in making sure that the students have the best services possible,” she said.

‘There’s nothing wrong with me’

“I have struggled with mental health issues for as long as I can remember, from at least age 8,” she said.

Pacetti’s parents have been in and out of prison, and in her youth she hopped between the homes of other family members.

In middle school, she struggled with eating disorders before her first suicide attempt in eighth grade. She’s had eight attempts that have hospitalized her or put her near death.

After transferring to UW-Whitewater last fall, she tried to die by suicide again after a few days of feeling hopeless. She was sent to a Madison psychiatric hospital, but there was a waiting list.

She eventually was released because the hospital needed a bed for someone else. Pacetti looked at other programs, but they would’ve required her dropping out of school.

Pacetti eventually found treatment that works for her. While she still has bad days, she said she’s come a long way from the day she heard sirens approaching her dorm room.

Pacetti said she used to be depressed and have suicidal thoughts 90 percent of the time. That’s now closer to 10 percent, and she wants others to know the fight is worth it.

“I still have my days. I still have suicidal idealization sometimes, but most of the time I’m pretty darn happy, now.”

“There’s nothing wrong with me. It’s a part of me,” she said.

“It doesn’t make me a bad person.”