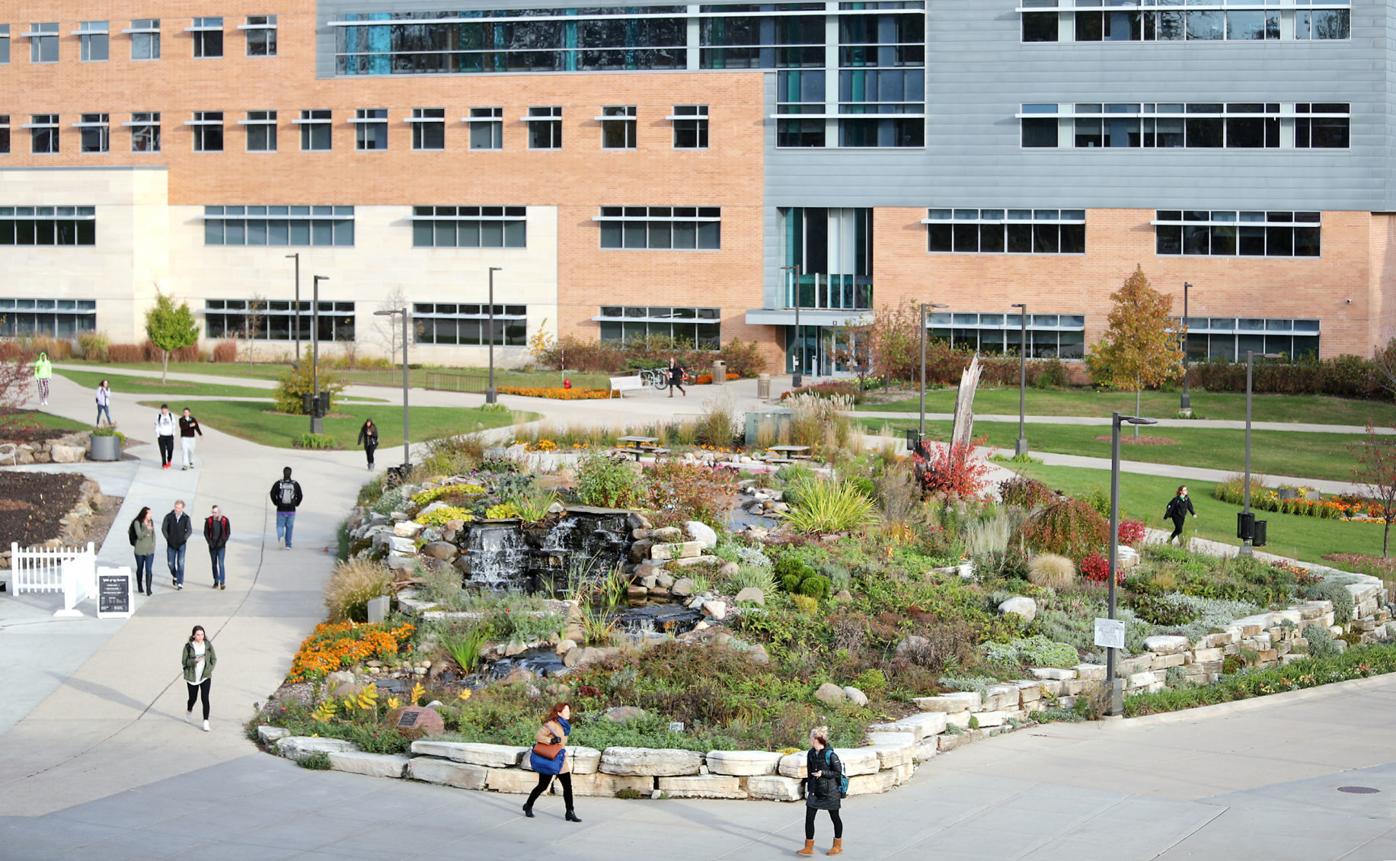 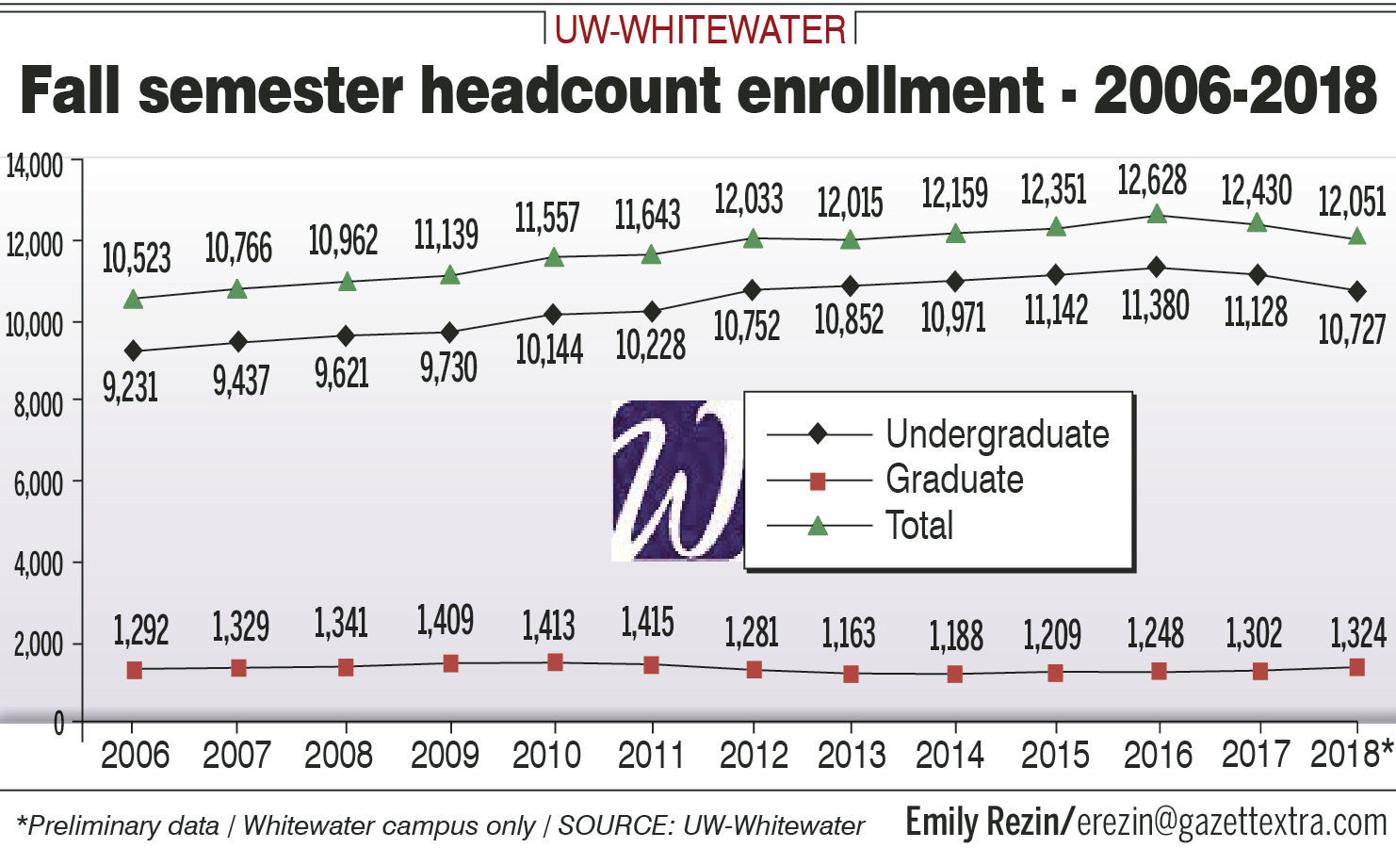 Enrollment at UW-Whitewater’s main campus dropped for a second consecutive year this fall, but the university also reported a record number of freshmen returning for their sophomore years, according to preliminary data from the university.

This is the first year after UW-W merged with what was formerly known as UW-Rock County. The campus in Rock County saw a slight decrease in enrollment, too—down 11 students to 897.

The total preliminary count at both campuses is 13,025. That also includes 77 students through UW Colleges Online. Final enrollment numbers should come later in the fall.

Last year, UW-W saw its first enrollment drop after years of increases. Before the start of the 2017-18 school year, UW-W had seen record enrollment seven times in the previous eight years.

Now, the campus in Whitewater has seen two consecutive years of lower enrollment.

A smaller freshman class last year accounted for a big piece of the drop—going from 2,220 in 2016 to 2,014 in 2017. This year’s preliminary freshman count is slightly up to 2,024, and the school retained a record percentage of last year’s freshmen—81.9 percent.

The school also announced a record 2,733 students graduated in 2016-17, the most recent data available. The graduation rate, according to a news release, also was a record: 61.7 percent.

Matt Aschenbrener, associate vice chancellor for enrollment and retention, said the university has long been strong at retention compared to similar schools.

Beyond the programs offered to freshmen, he pointed to the quality of dorms, including a new residence hall scheduled to open next fall.

As for declining enrollment, Aschenbrener said, competition for students is “the main factor” in explaining a smaller freshman class.

To address this, the university hired consultants from Iowa-based Ruffalo Noel Levitz to look at how the school markets to students, he said. The university also plans to start earlier in the recruiting cycle.

Aschenbrener said the region from which UW-Whitewater typically recruits has seen less of a decline in high school graduates than the rest of Wisconsin. He said that has led to other schools recruiting harder in UW-Whitewater’s area.

UW-W typically looks at 17 nearby counties, including four Illinois counties bordering Wisconsin, he said. About 80 percent of students come from within 80 miles of campus.

“We recruit regionally and across the U.S. for some specific programs, but the majority of our students come from that area,” he said.

After the merger with UW-Rock County, Aschenbrener said, some students who are denied admission to UW-W will be offered a spot in the Rock County campus, which now has its own dedicated admission counselor.

In a news release, UW-W said the university’s food pantry and Warhawk Emergency Fund help retain students when they might be on the fence of dropping out because of financial struggles.

Chancellor Beverly Kopper in the release said the graduation and retention rates are “critical benchmarks” that show success.

“While we are all very focused on admitting more students to UW-Whitewater, keeping them here on a clear path to graduation is also an important component of enrollment,” she said in the release.

UW-Whitewater is planning to cut its budget by $12 million over the next two years and lay off some employees to compensate for a “drastic decline in enrollment,” the chancellor announced Thursday.