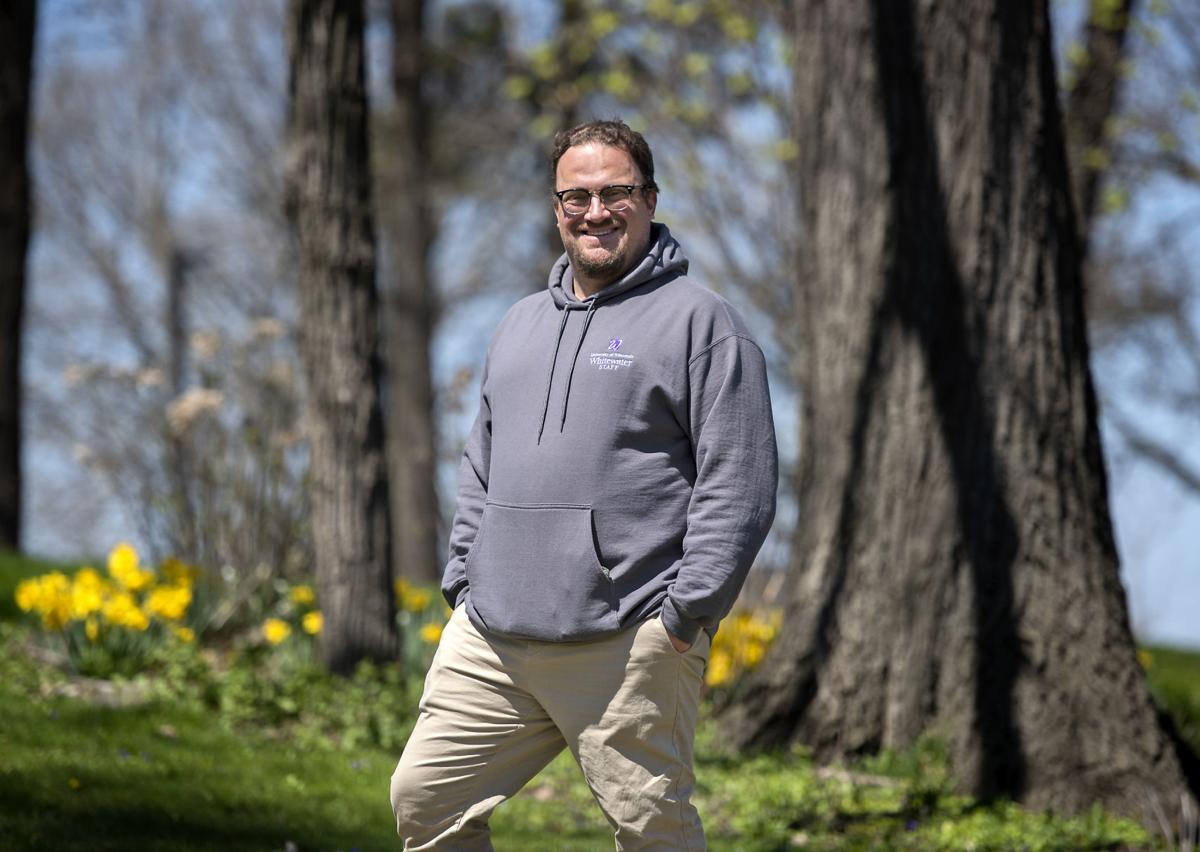 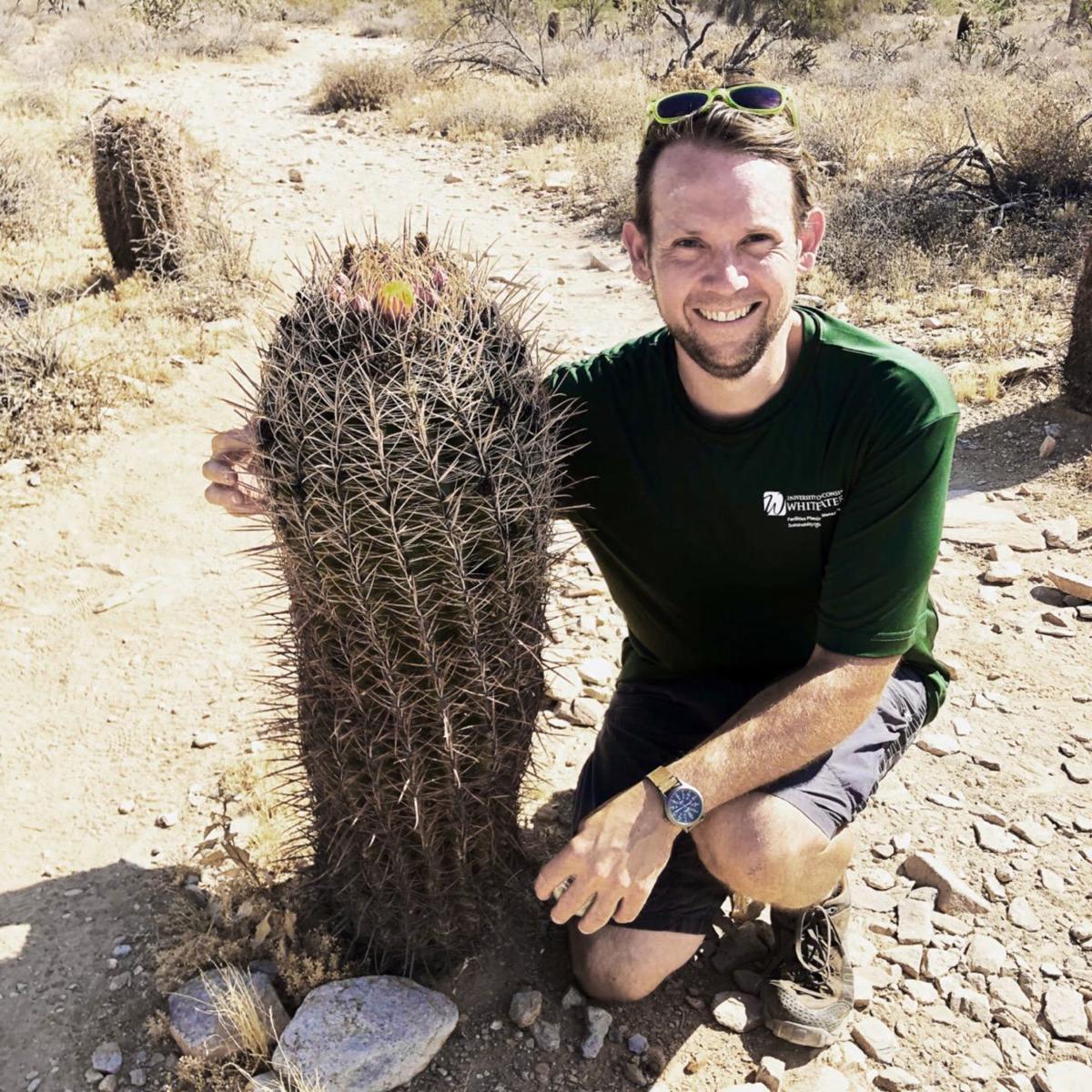 Mike Baker is shown with a cactus in Phoenix. Baker created a digital map of the more than 1,700 trees on the UW-Whitewater campus while he was an intern with the university’s sustainability office.

Mike Baker is shown with a cactus in Phoenix. Baker created a digital map of the more than 1,700 trees on the UW-Whitewater campus while he was an intern with the university’s sustainability office.

Mike Baker ended many days on the UW-Whitewater campus getting to know trees.

He noted their common and scientific names.

He checked on their physical conditions.

He even got personal and measured their girths at breast height.

When the intern with the campus sustainability office was finished, he had catalogued more than 1,700 trees.

In addition, he created a digital map of campus trees and put up signs identifying more than 60 tree species, mostly in the Chopp and Salisbury arboretums on the south end of campus.

The arboretums are named after two notable men.

Albert Salisbury was president of the Whitewater Normal School, a training college for teachers that predates the university.

In 1873, Salisbury started planting every type of tree, shrub and forb that would grow in Wisconsin on the campus grounds. He also recognized the biodiversity and rare plants on the glacial drumlin that once marked the boundary of the normal school.

“We tried to get a nameplate on almost every one of the trees in the Salisbury arboretum because of its wide variety and density of trees,” Baker said. “And because Salisbury was so integral in getting interesting trees on campus.”

A century or so after Salisbury’s effort, biology professor Joseph Chopp worked to conserve wooded areas on campus and added new plantings.

Fast forward to the present.

The project carried on Salisbury’s vision by identifying campus trees and planting new ones to ensure all native species are represented.

“The goal ultimately will be to repopulate the arboretum,” Enterline said. “We needed a coordinated effort to know what we had, what needed to be replaced and what is missing.”

Baker, a nontraditional student who is a trained arborist, did most of the work and completed accreditation applications.

The Arbor Day Foundation recognized UW-Whitewater as a Tree Campus, and ArbNet, run by Morton Arboretum of Illinois, gave the university a level II accreditation.

To qualify, the campus showed that it has at least 100 species of trees, offers programs devoted solely to trees and employs a dedicated grounds crew to care for the landscape.

It also needs to collect seeds to plant more trees or share the seeds with other arboretums, Enterline said.

UW-Whitewater is the only university in the state and one of only 113 arboretums worldwide to get that level of accreditation.

“This accreditation reflects our commitment to being responsible stewards of the lands entrusted to us,” Enterline said.

He sees the arboretums as an interactive laboratory.

“Students studying botany can learn by going into the landscape,” he said. “But it also can inspire curiosity among campus visitors to learn more about trees and their benefits.”

Baker, who graduated with a degree in geography, hopes the signs and digital map will help students and visitors kindle relationships with trees and respect them more.

Now is a good time.

Early May brings awakening in the botanical gardens.

A giant gingko tree wore buds the size of squirrel ears, and a magnolia exploded in pink blossoms last week. A giant sycamore stretched into a cloudless sky, revealing the handsome camouflage pattern of its bark.

While at the school, Baker was impressed with two swamp white oaks that have withstood the test of time.

“I’ve dealt with trees for 10 years, and they were the biggest I’ve ever seen,” he said. “We tracked down documents from the early 1900s that mention two swamp oaks being planted. It’s a pretty good likelihood they are the ones.”

Enterline said the campus trees offer a peaceful option for people who want to get outdoors in a natural setting.

“Right now, with fewer students on campus, it is quiet,” Enterline said. “Visitors can walk on sidewalks without encountering a lot of people. Just be mindful of others and keep social distancing.”

He encourages people to spend more time in the natural world.

“There is a lot of wonder and amazing things to see in nature,” Enterline said, “if we take the time to slow down and see with observational eyes.”

To learn more about the Salisbury Idea and go on a digital walking tour, visit uww.edu/sustainability/campus-initiatives/salisbury-idea.