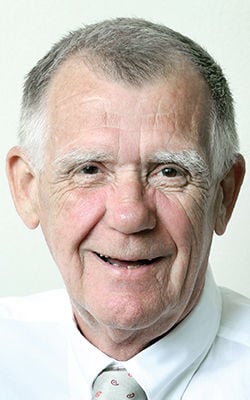 Janesville School Board member Dale Thompson announced in a letter Thursday that he will not seek re-election in April.

Thompson is the second board member in as many days to announce he will not seek another term. Board President Steve Huth said he does not plan to run for re-election Wednesday.

He served as the director of the Rock County Developmental Disabilities Board before retiring and has been elected to the school board four different times.

In his letter, Thompson said the primary reason he chose not to seek re-election is because at age 79, he wants to enjoy what life has to offer.

“It’s been an honor and privilege,” Thompson said of being a school board member.

“I feel Janesville has a good school system thanks to the hard work of our dedicated staff and board. I have full faith the board and staff will continue to make efforts to make it outstanding. … It’s time for someone younger to replace me.”

Janesville School Board member Greg Ardrey said he will seek reelection this spring. The current board treasurer was appointed to the board in July 2008 and then elected in 2009.