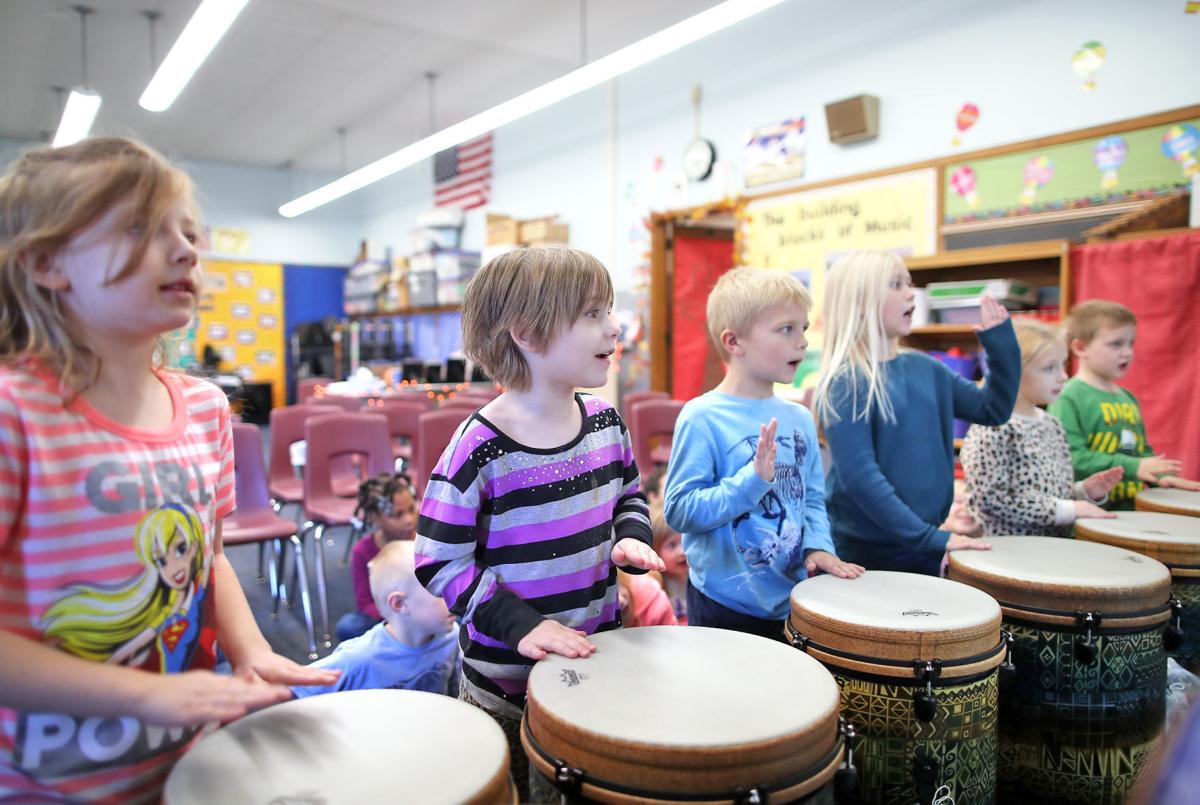 Miah Cannon, Alexis Goepfert, Jayden Harwick, Clara Hazeltine, Verana Kubly and Colton Klug, left to right, all try to keep the beat of the song “In the Hall of the Mountain King” during their music class at Washington Elementary on Thursday, Nov. 7. 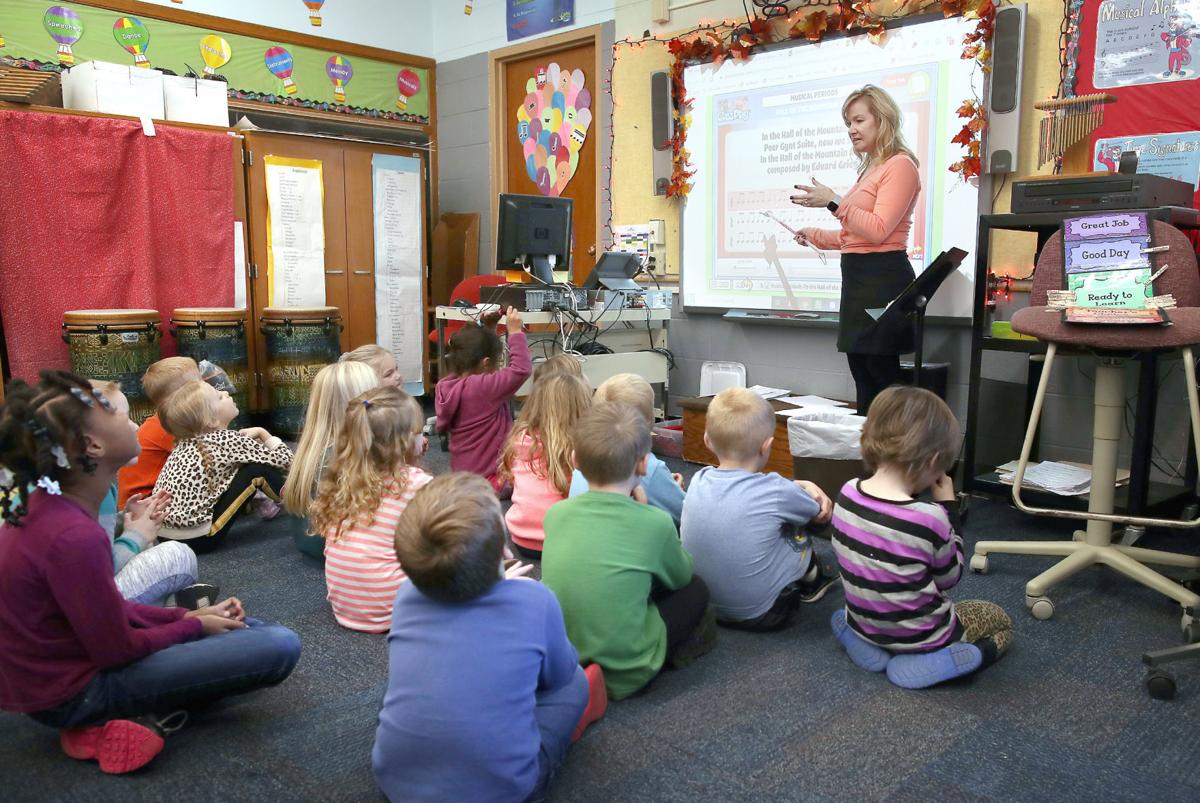 Music teacher Kim Schram works with a kindergarten class to count the beats within the song “In the Hall of the Mountain King” during their class at Washington Elementary on Thursday, Nov. 7.

Kindergartners move to the beat—and mimic running away from trolls— of the song ‘In the Hall of the Mountain King’ during a music class at Washington Elementary on Thursday, Nov. 7. 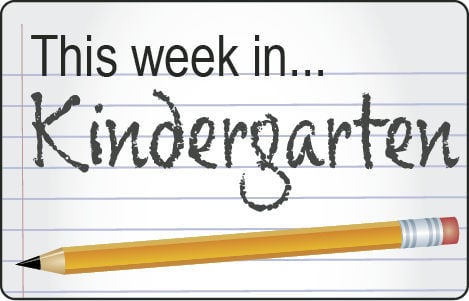 It has drums. It has Boomwhackers, which are plastic tubes of different lengths that play a note when you strike them. It has keyboards, recorders and hand instruments. Theoretically, such a setting should be a recipe for chaos, but Stacy Glowacki’s kindergartners know better than to go running randomly making noise. They save that for recess.

Although they’re described as “specials” or “extras,” classes such as music, art and gym play a crucial part in young students overall learning, researchers say. At Washington Elementary School, kindergartners get two 30-minute sessions of music per week.

The Janesville School District’s music curriculum is based off the National Coalition of Core Arts Standards, Schram said. Like the other elementary grades, kindergartners are learning about melody, rhythm, meter, expression, form, tone color, harmony and connections among the variety of styles, genres and cultures of music and music history.

Schram often starts her classes with what she called a “social song.” Such songs teach social or emotional skills that kids will need to succeed: how to get along with others, how to resolve a conflict, and the importance of saying please and thank you. Many kids come to school without those basics, and the responsibility for that learning is transferred to schools.

On a recent Thursday, Schram and her kindergartners started by reviewing a song about manners. What were the four important words they learned?

Well, good, but much the same as Liam’s answer.

Niles remembered “Excuse me,” but the kids had to be prompted to recall “You’re welcome.”

Then it was up on their feet for the manners song, its dance and the sign language moves that went along with it.

Because Schram only has a half hour for each music class, transitions happen fast. From the cheery, upbeat children’s song about please and thank you, the classroom of 5- and 6-year-olds moved on to Edvard Grieg, the composer who wrote music for Henrik Ibsen’s play “Peer Gynt.” They were studying the rhythm and expression in “In the Hall of the Mountain King,” one of the great musical moments in Ibsen’s excruciatingly long play.

The music starts slowly and quietly, as Peer Gynt tries to tiptoe away from his troll captors. It then gets louder, faster and panicked as the trolls realize he is loose, and the chase is on.

The kindergartners were asked to identify what was happening in the music and why.

Liam, always on top of his music game, noted that the music started to get faster. Kennedy recognized that the hero was trying to quietly slip away on tippy-toe at the beginning of the piece, and Jayden was able to talk about the “big tall instrument”—the bass—that made the opening notes.

“The larger the instrument, the lower the sound,” Schram reminded them.

At the end of the class, students got to tap out the quarter- and half-note beats on tubanos, cylindrical drums that reached almost to the middle of their chests.

That’s one small mental habit that helps kids who are learning to read.

Neuroscientists have gone beyond those basics, looking at what they refer to as “auditory neural synchrony.” In an article in “Progress in Brain Research,” scientists at the auditory neuroscience laboratory, Northwestern University in Evanston, Illinois, note that musical training can provide “an effective developmental educational strategy for all children, including those with language learning impairments.”