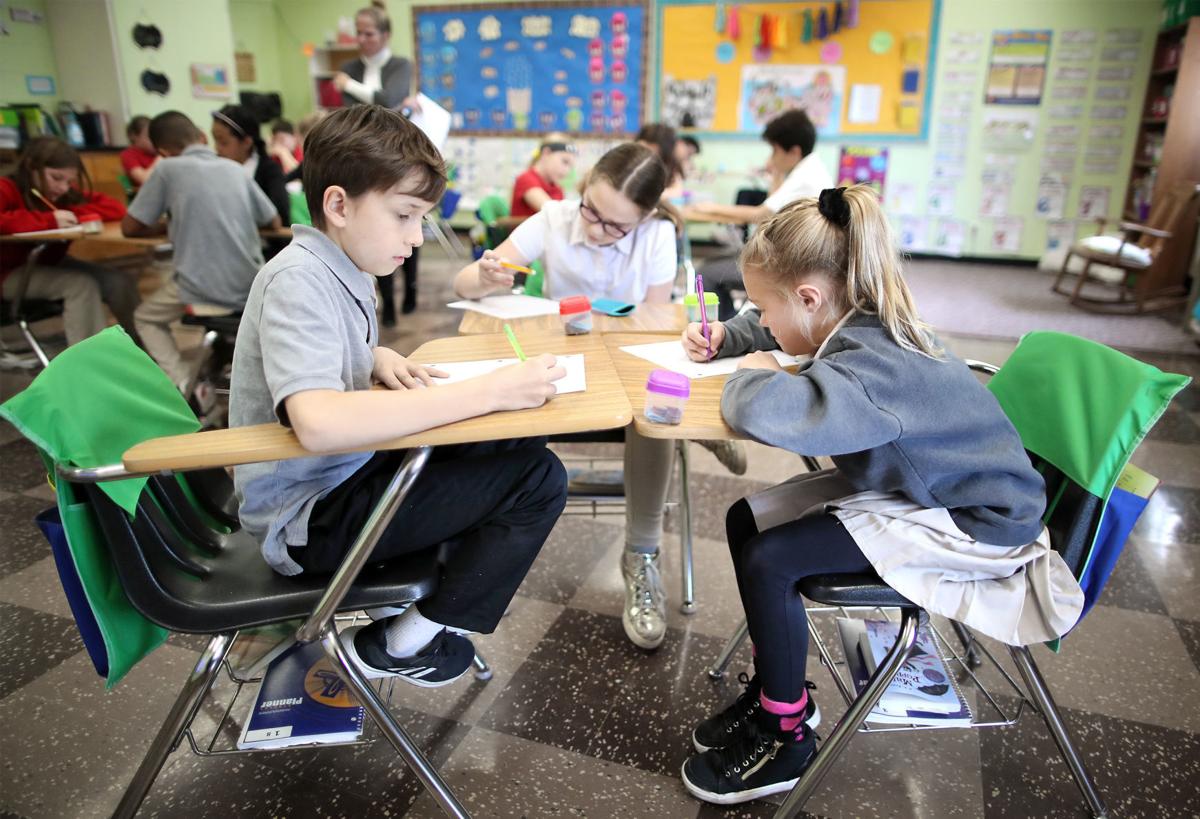 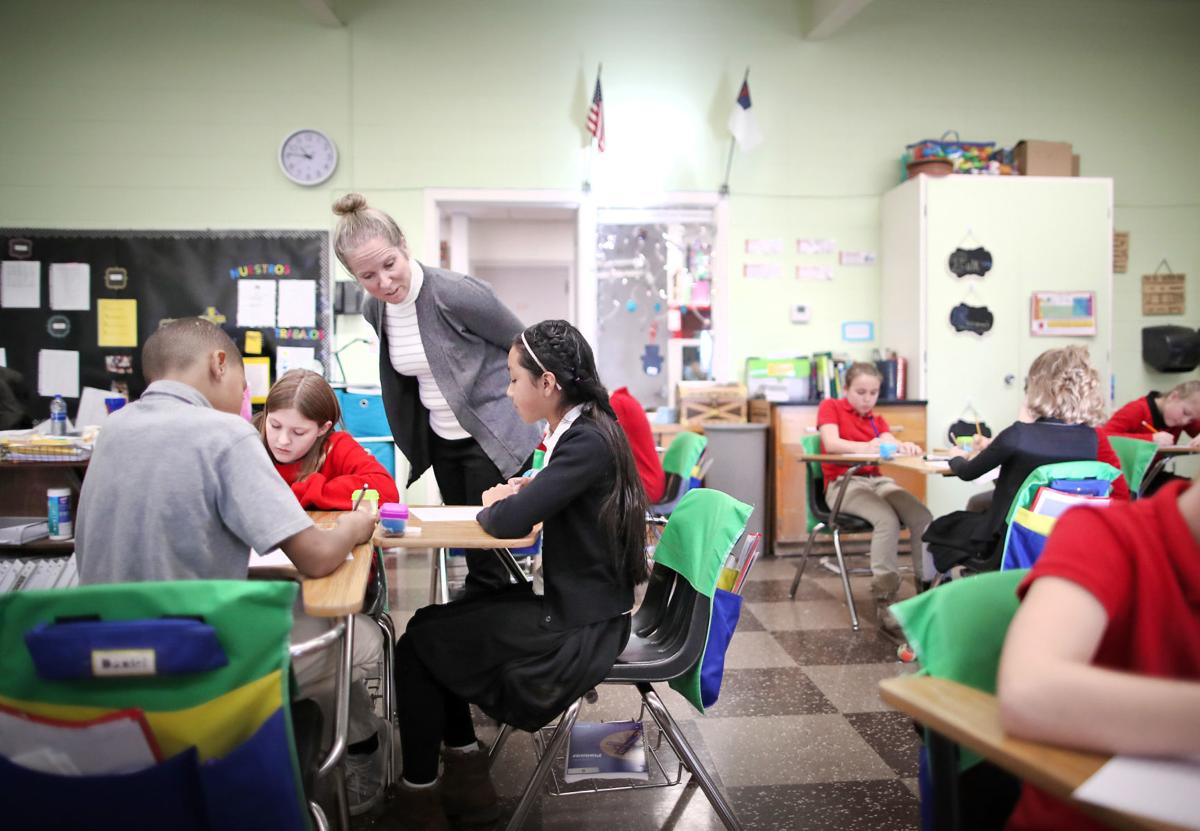 Fifth-grade teacher Amy Hill works with a student on an essay in class at Rock County Christian School's elementary campus on Janesville's south side. 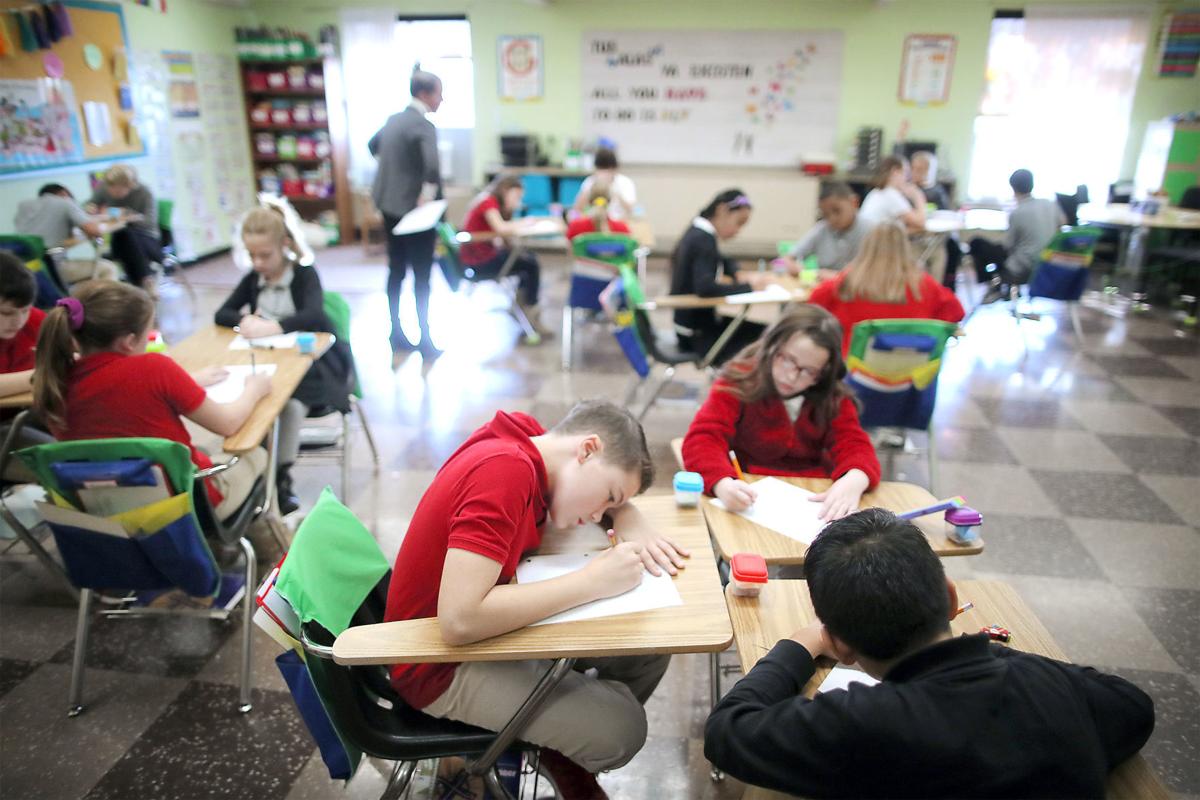 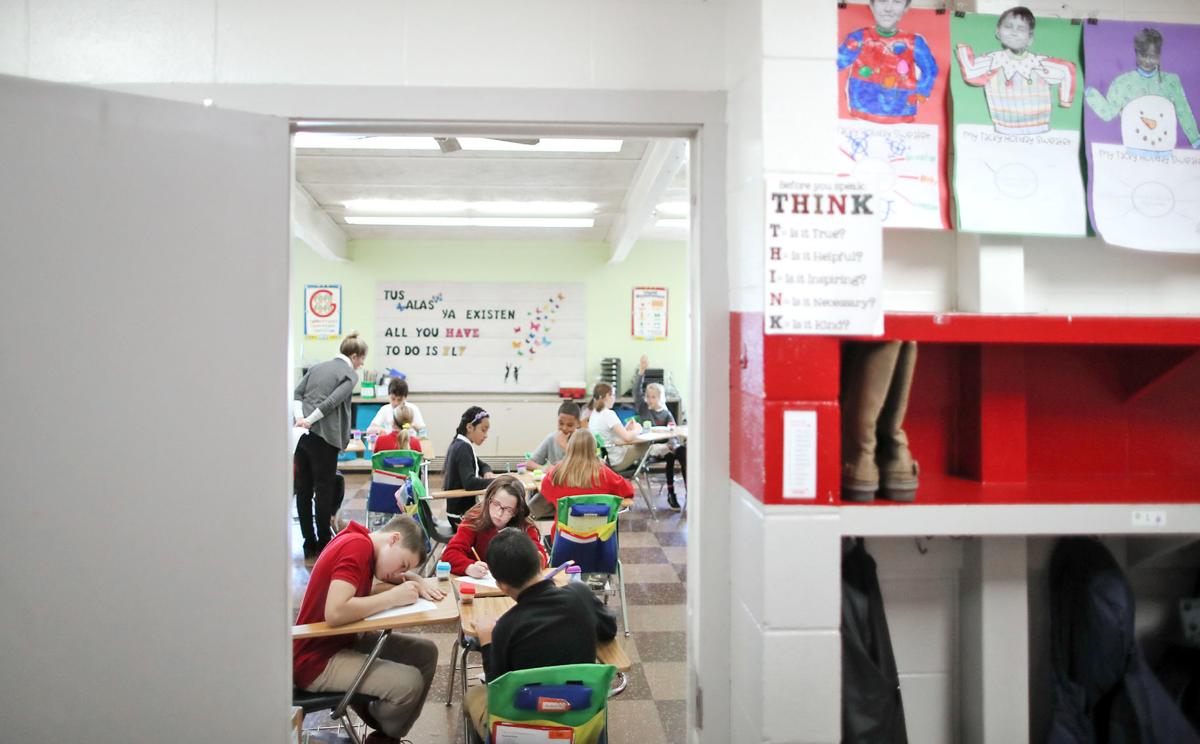 For almost 40 years, Rock County Christian School has been quietly and unapologetically living out its faith at a small school just off Highway 51.

During those 40 years, the school has grown, both in numbers and in grades, adding a junior and senior high school in Beloit.

In November, when the Wisconsin Department of Public Instruction’s school report cards came out, the Janesville school found its score at the top of Rock County’s elementary schools. Rock County Christian’s Elementary School scored an 88.1, a rating of “significantly exceeds expectations.” Out of the roughly 726 K-5 and K-6 schools in the state, Rock County Christian’s Janesville location came in 48th, placing it in the top 93% of elementary schools with that configuration.

For head of school Ron Gruber, the school’s success is due to its small size, family responsiveness and values.

“… Parents want a biblical worldview included in their child’s education,” Gruber said. “But then they see that because of our smaller size, we can be more responsive to students who maybe don’t fit in the traditional public school environment. They can be successful here.”

Class sizes generally range from 15 to 20 students but occasionally run larger, and faith is integrated into every lesson. Community service is a requirement, as is chapel.

About 84% of Rock County Christian School’s students pay their tuition using school vouchers according to Gruber. Vouchers allow low-income families to attend private schools with state money. The state pays a set amount, $8,000 a year for each student, to the private schools.

Families have to meet income requirements to use vouchers. About 94% of students at Rock County Christian are “economically disadvantaged,” according to the Wisconsin Department of Public Instruction.

Rock County Christian is a nondenominational Christian school, but it asks that students on families adhere to a “Biblical worldview” both at home and school.

On the admission forms, the first questions after the generalities of name and address are, “Have you personally received Jesus Christ as your Lord and Savior? What do you base that on?” Both parents must answer.

Admission documents include a recommendation from the family’s pastor.

Parents are also asked to sign a “commitment form” that includes a statement of faith, “We believe the Bible is the only inspired, infallible, and authoritative Word of God in the original text.”

Gruber said that the school doesn’t hide its character or its beliefs.

“I think people go to our website, and they see who we are,” Gruber said. “And they know that’s part of who we are, and they want their children to be here.”

Another part of the commitment form outlines the role of the family.

The school, it says, “has been established on the Biblical principal that God has given parents the primary responsibility for educating their children. The school enters into a partnership with parents …”

Because the school gets voucher money, it cannot require parents to volunteer, but they often do anyway.

“Parents work together to create this community. They want to be involved,” Gruber said.

For the school community—staff, parents and students—the state report cards were good news.

“You know, we are very proud of the state report cards we got,” Gruber said. “But there’s really more to the school than that.”

Gruber has impressed on staff that their school can teach both faith and academics well, not just one or the other.

“We’re not going to sell out our beliefs in order to achieve test scores, but we’re also not going to ignore their importance,” Gruber said. “Families say, ‘I want my student to get a high quality education along with that biblical worldview and Christian upbringing.’”