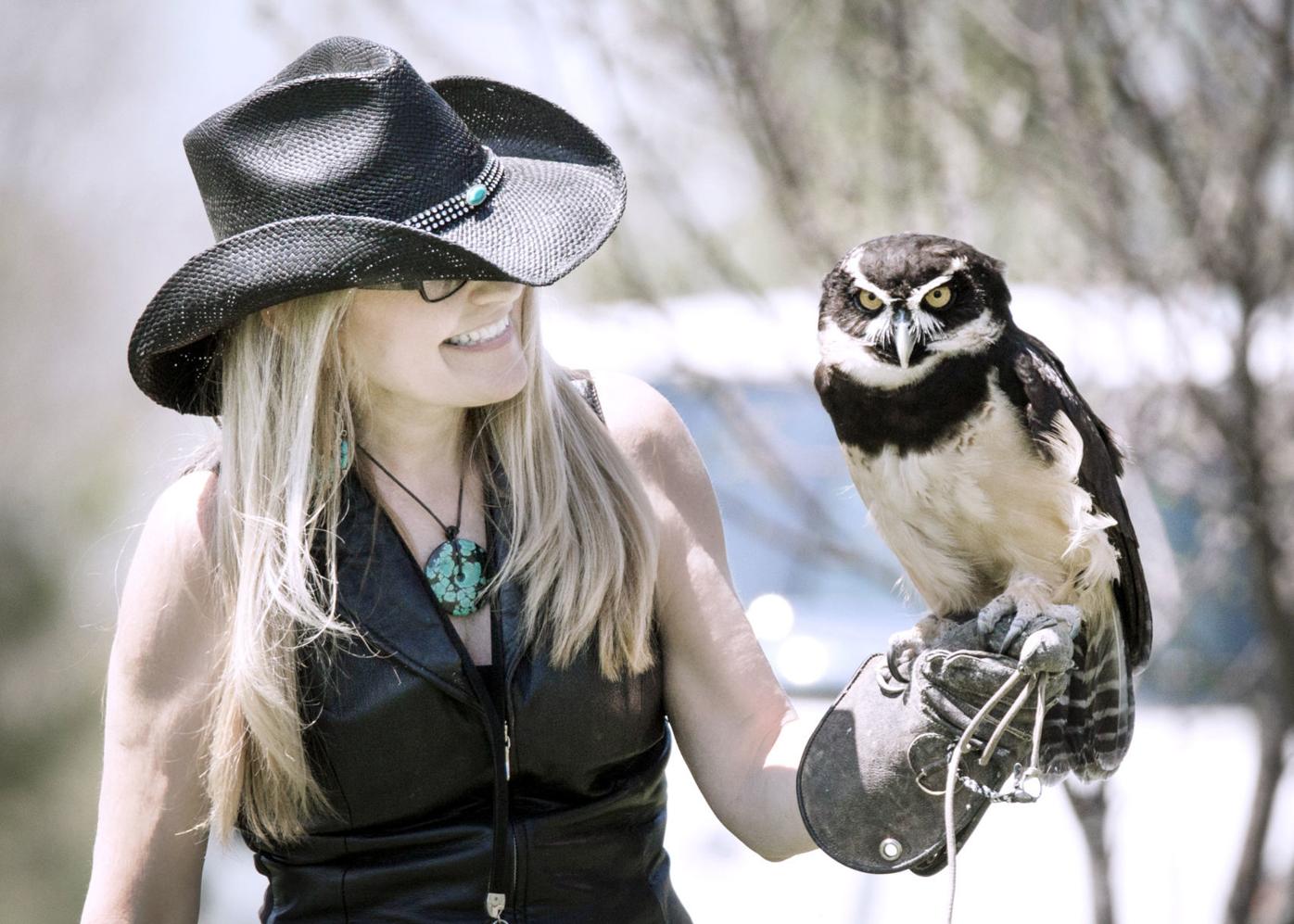 Dianne Moller holds Oakley, a captive-bred female spectacled owl. The bird is native to the rainforests of South and Central America. 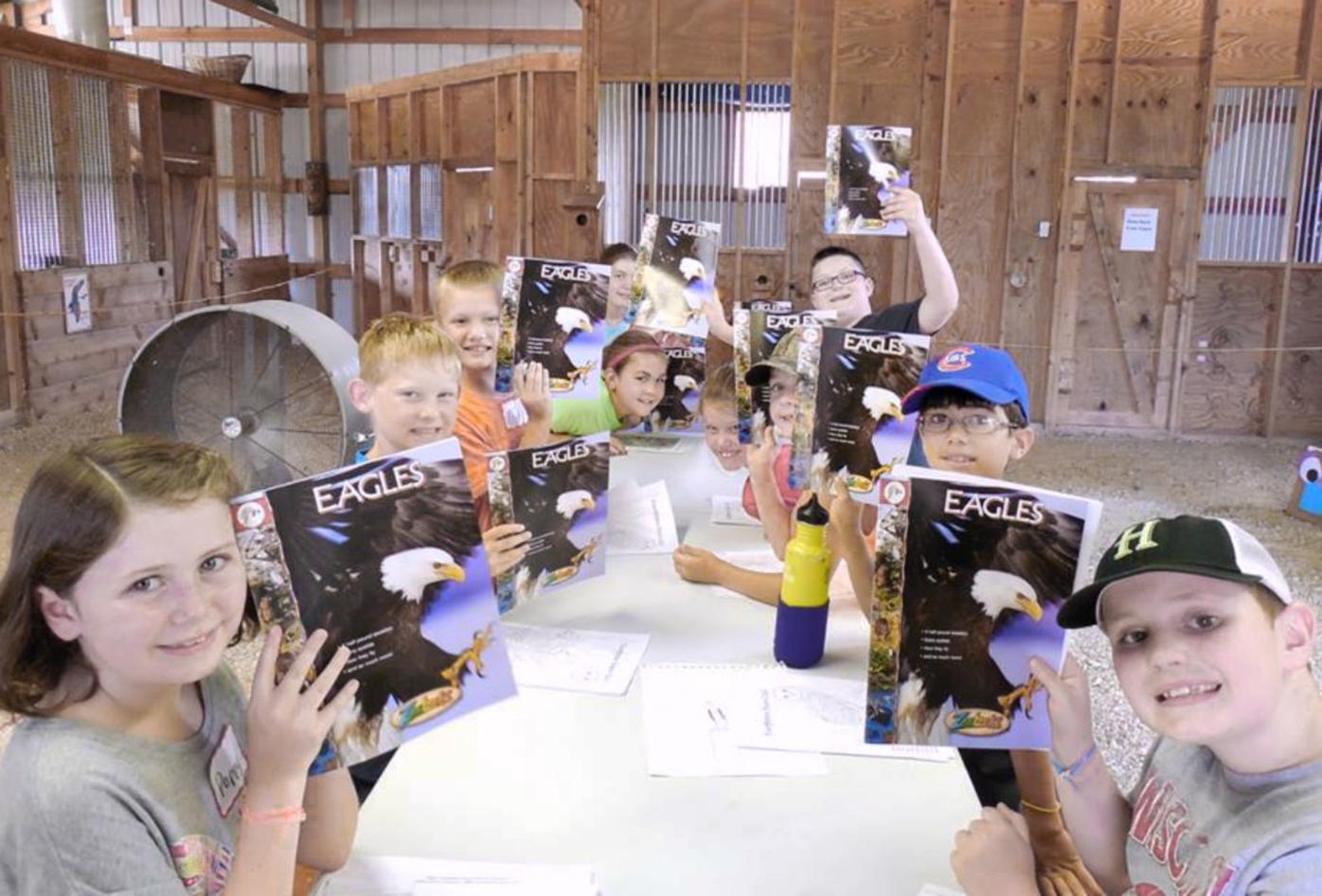 Children attend Raptor Camp at Hoo's Woods Raptor Center in Milton, where they learned about birds of prey and their important roles in the ecosystem and how to care for and respect the Earth. Most of the outreach programs provided by Hoo's Woods are at schools, libraries, events and conservation groups. 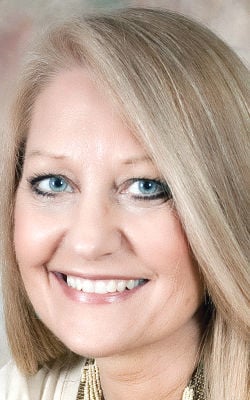 Dianne Moller holds Oakley, a captive-bred female spectacled owl. The bird is native to the rainforests of South and Central America.

Children attend Raptor Camp at Hoo's Woods Raptor Center in Milton, where they learned about birds of prey and their important roles in the ecosystem and how to care for and respect the Earth. Most of the outreach programs provided by Hoo's Woods are at schools, libraries, events and conservation groups.

Anyone who has watched Dianne Moller release a hawk or an owl into the boundless sky will understand why she has survived.

Her face fills with joy and her whole being seems to lighten as another bird wings to freedom.

Twenty years ago, Dianne co-founded Hoo’s Woods with David Moller. David, her former husband, was active with the group until his death last year.

Hoo’s Woods is a private, nonprofit raptor education and rehabilitation center near Milton.

Since its beginning, Dianne has taken in 2,000 birds and has helped more than half return to their homes in the wild.

With the support of family, friends, volunteers and private and public sponsors, she has persevered.

Not all who become licensed as both a raptor rehabilitator and educator keep pace with the long hours. Nor do they keep alive the steady commitment to help the birds year after year.

Next month, Moller and a flock of supporters will celebrate the notable milestone.

They are planning a Sept. 29 fundraiser with an ambitious goal of raising $20,000.

Hoo’s Woods receives no state or federal funding to help birds in its care. Dianne also is not an employee of the state Department of Natural Resources.

She is a homegrown resource who grew into her role as a rehabilitator and teacher.

Today, many of her patients are birds that have been struck by vehicles.

“They are hunting and focused on their next meal,” Dianne explained.

The birds come in with all kinds of injuries, including concussions, broken wings and lower spine damage.

“We tell people to be careful when driving in the morning and evening when owls are most active,” she said, “and especially when you come over a hill because you can’t see what’s in the road.”

Other birds get sick after eating prey that has consumed rodent poison. Or they have gotten lead poisoning from dining on meat or fish full of lead shot or lead sinkers.

Dianne has been up many nights caring for sick or injured birds. The raptor center takes in almost 100 injured eagles, hawks, falcons and owls every year with the goal of releasing them back into the wild.

“You want them all to survive,” Dianne said.

She fondly remembers caring for her first snowy owl, who came in starving with a wing injury and lung and blood infection.

Dianne did not know if the large, charismatic bird would make it through the first night.

“The next morning, I opened his door, and he stepped out,” Dianne recalled. “I just bawled. I knew he would be all right.”

The owl, christened Wesley, could not be released back into the wild because of a permanent wing injury. Today, he is a popular member of Dianne’s educational flock. She has several kinds of raptors, including a spectacled owl, a golden eagle and a peregrine falcon, that she can bring to public talks.

Most people have not seen a bird of prey so intimately.

“Other than a zoo, there is no place for people to experience the birds so close,” Dianne said.

Moller estimates she has presented more than 2,500 educational programs about birds of prey and the environment.

Her audiences include public and private school kids, Scouts and conservation groups.

“Youth need to learn about wildlife if they are to save it,” she said. “The live bird makes a big impact. It is why kids become interested and ask what they can do.”

“She is outstanding in that regard,” the longtime supporter of Hoo’s Woods said. “She has done so much work in schools teaching children at a young age. It is invaluable.”

Meg Layton of Tallgrass Restoration outside Milton remembers the day an employee found a baby owl on the ground after a storm.

“We called Dianne,” Layton said. “She told us how to tether a laundry basket to a tree and put pine shavings in it. We put the baby owl in there, and he did just fine.”

She called Dianne “an outstanding resource about care and management of a downed raptor.”

“People appreciate the fact there is an expert this close who can spring into action and do medical care,” Layton said.

“Dianne is an invaluable resource. She found her niche in the world. She also is a woman with an international reputation.”

In Dianne’s quest to learn more about raptors, she attended a falconry meeting more than 15 years ago. Today, she is a master falconer, known for flying merlins, one of the most difficult raptors to train.

She has shared her knowledge overseas. In 2011 and 2014, officials of the International Falconry Festival in Abu Dhabi of the United Arab Emirates invited her to speak.

Child of the woods

Dianne grew up in Rock County. She still has the little book her mother gave her about birds.

As an adult, Dianne met former wildlife rehabilitator Tom Wolfram in the 1990s and volunteered for him. One day, Wolfram asked her if she wanted to hold a Harris hawk.

She intuitively held the hawk correctly the first time.

“It’s something you are born with,” Dianne said.

She studied with raptor rehabilitator Barbara Harvey of Horicon and eventually became licensed by both the U.S. Fish and Wildlife Service and the Wisconsin Department of Natural Resources. She also has separate state and federal permits to conducteducational programs.

“I’ve been fortunate to follow my passion,” Dianne said. “Golly, am I a lucky person.”

To be a sponsor: Contact Dianne Moller at falco5@ticon.et.