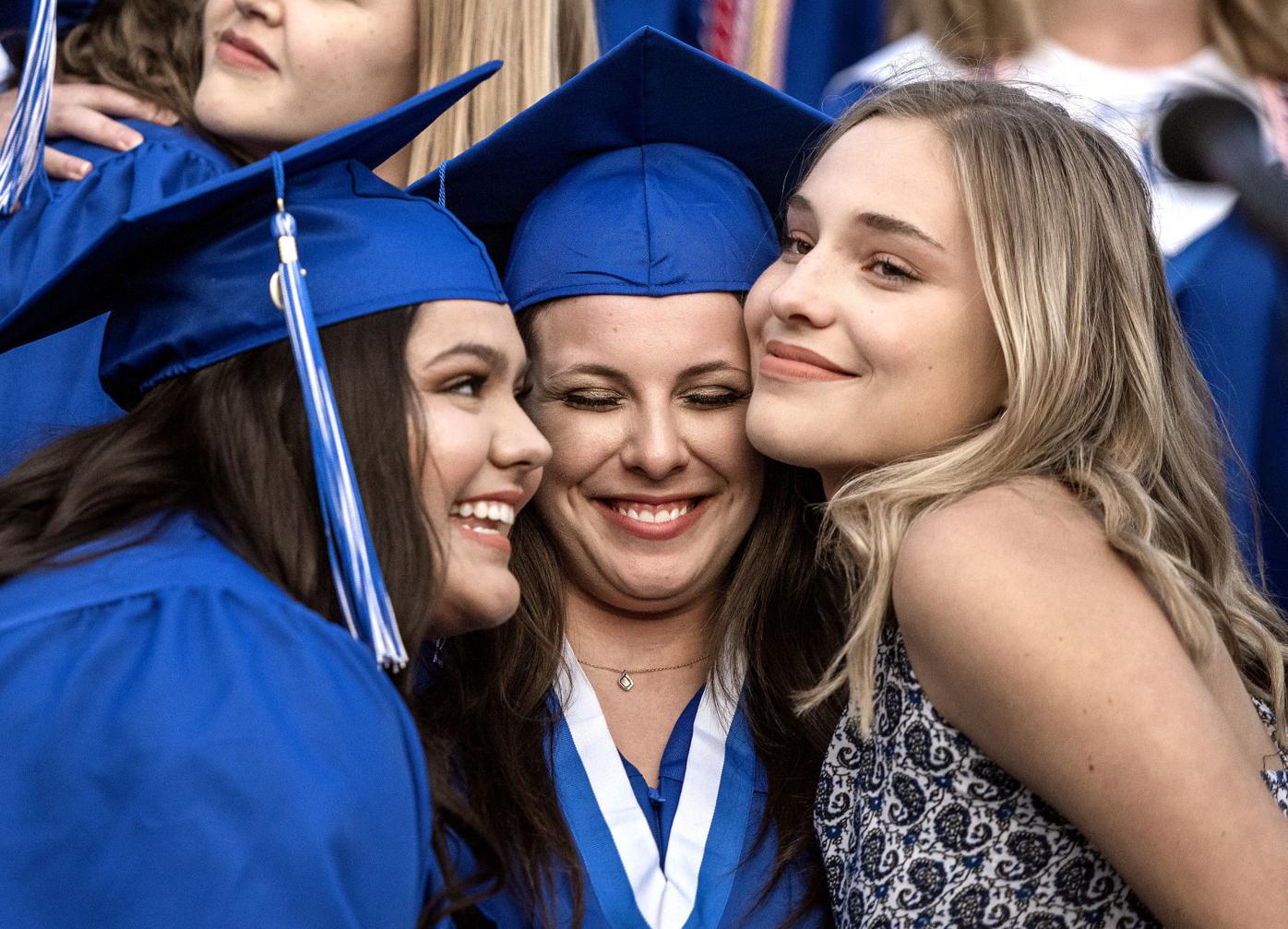 A capella choir member Maeley Heath-Lovell, center, is embraced by Naomi Arellano, left, and Emily Klein, right, after the choir's performance of 'I Lived' by OneRepublic on Thursday, June 6, 2019, at Monterey Stadium in Janesville. 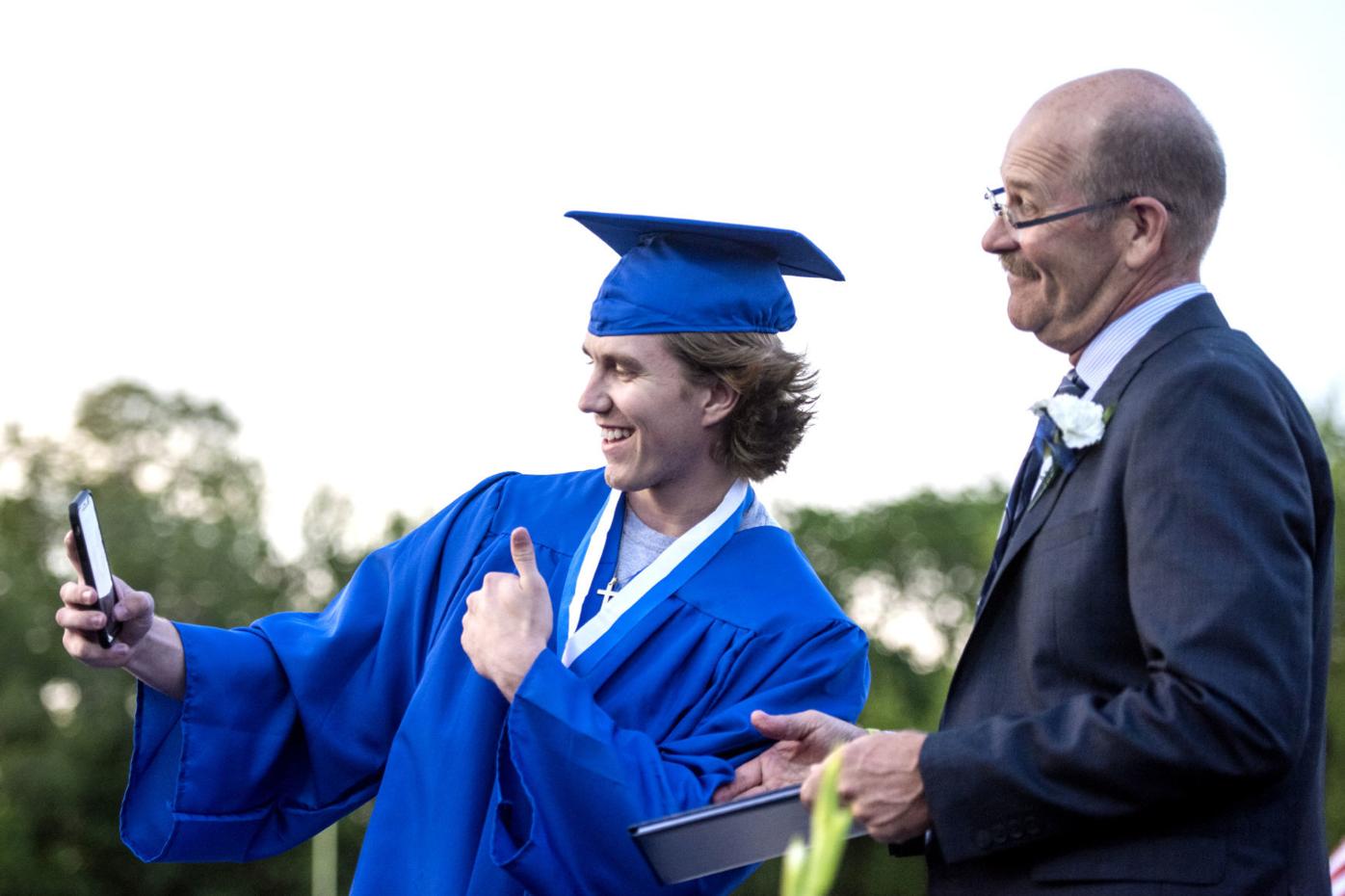 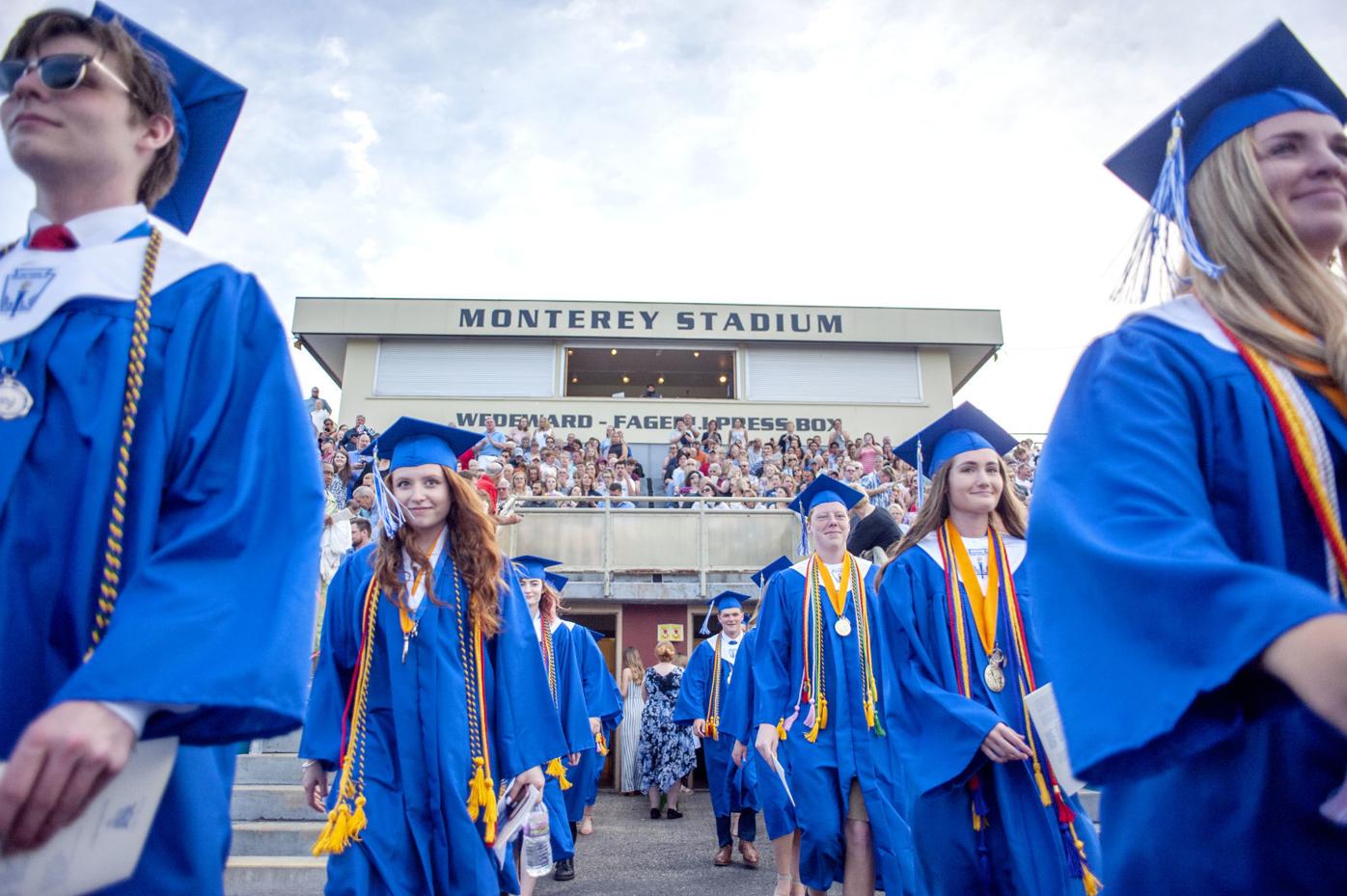 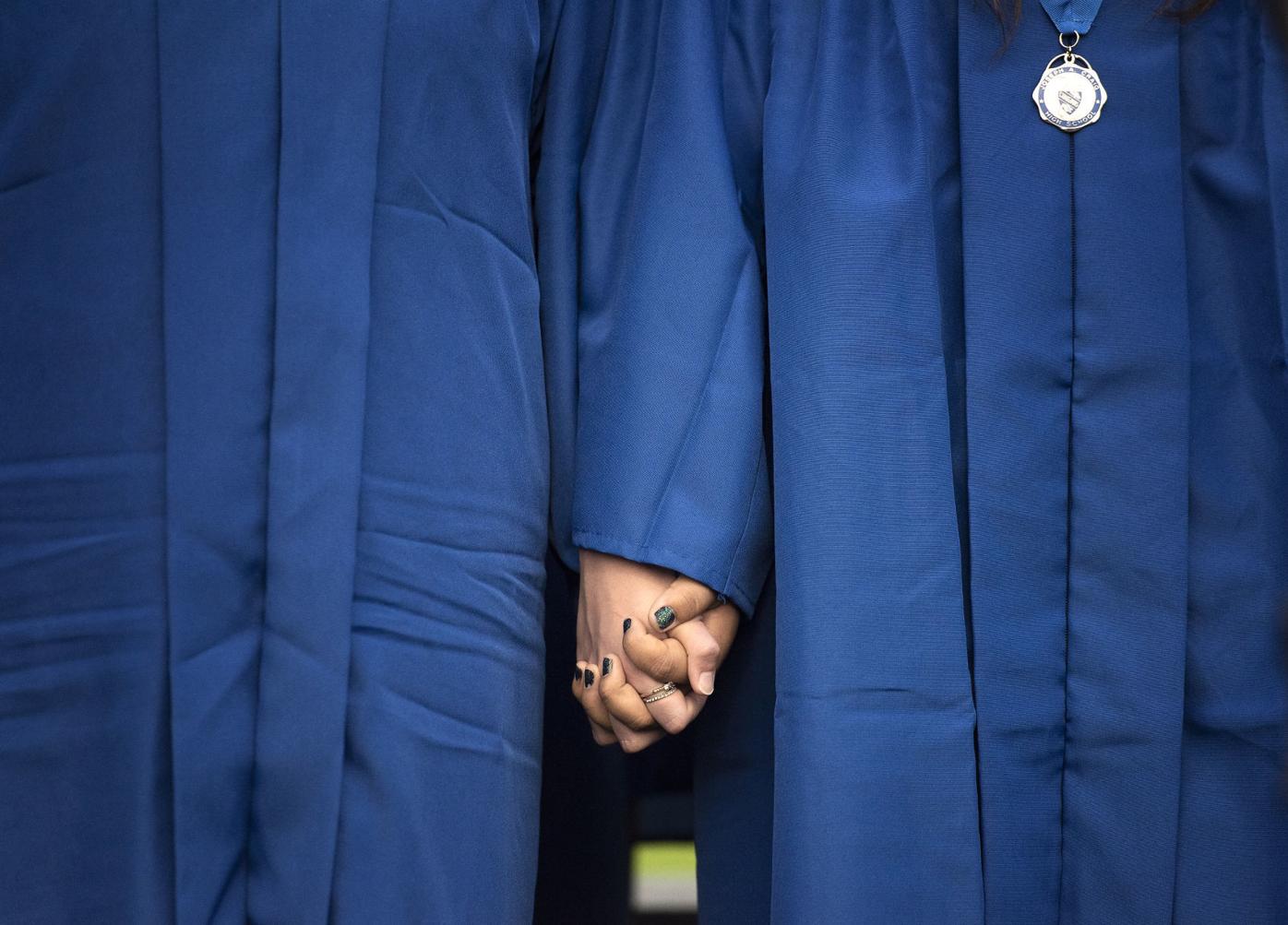 Naomi Arellano, left, and Maeley Heath-Lovell, right, hold hands as they perform with the a cappella choir Thursday, June 6, 2019, at Monterey Stadium in Janesville. 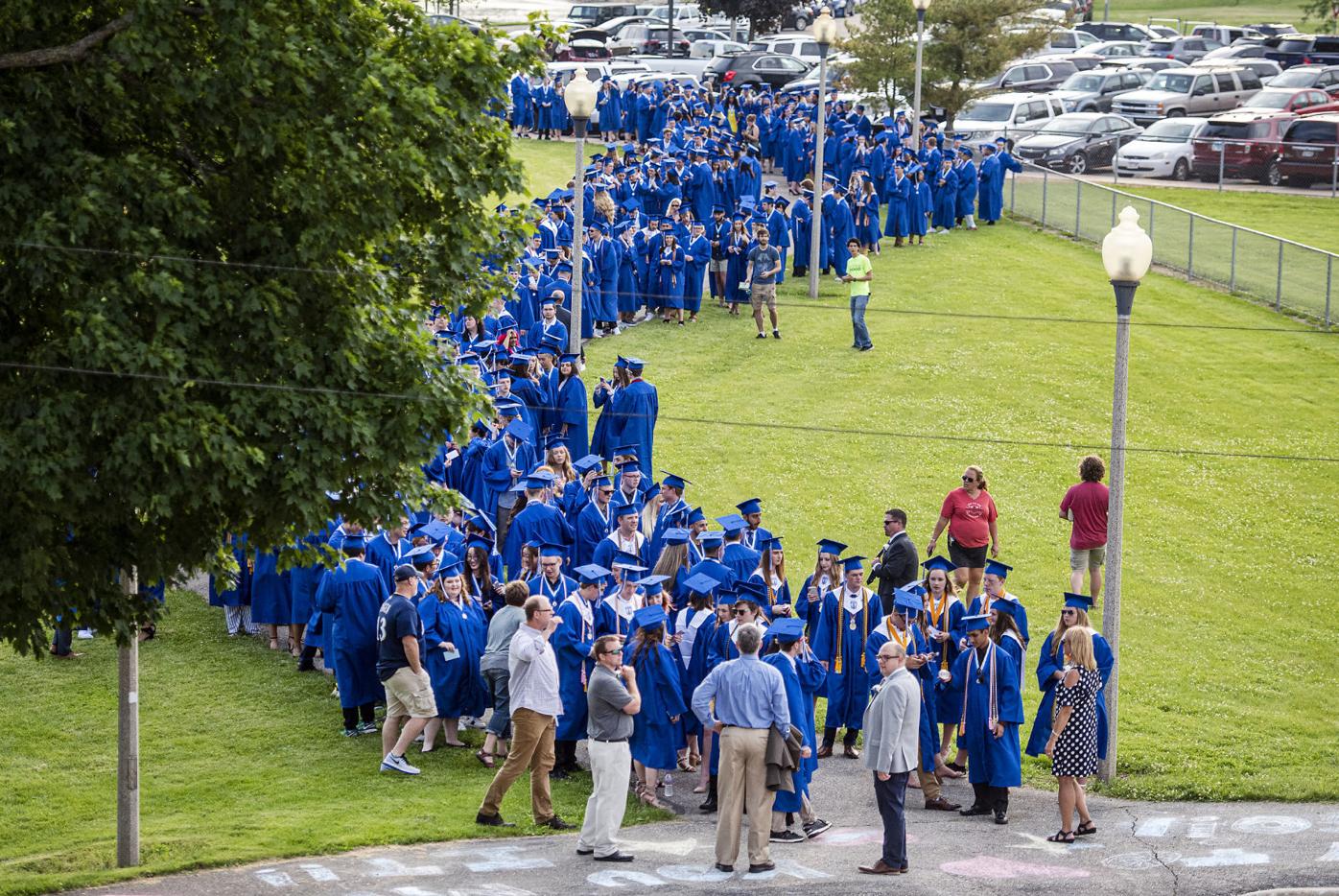 Craig graduates line up outside of Monterey Stadium before their graduation ceremony Thursday, June 6, 2019, in Janesville. 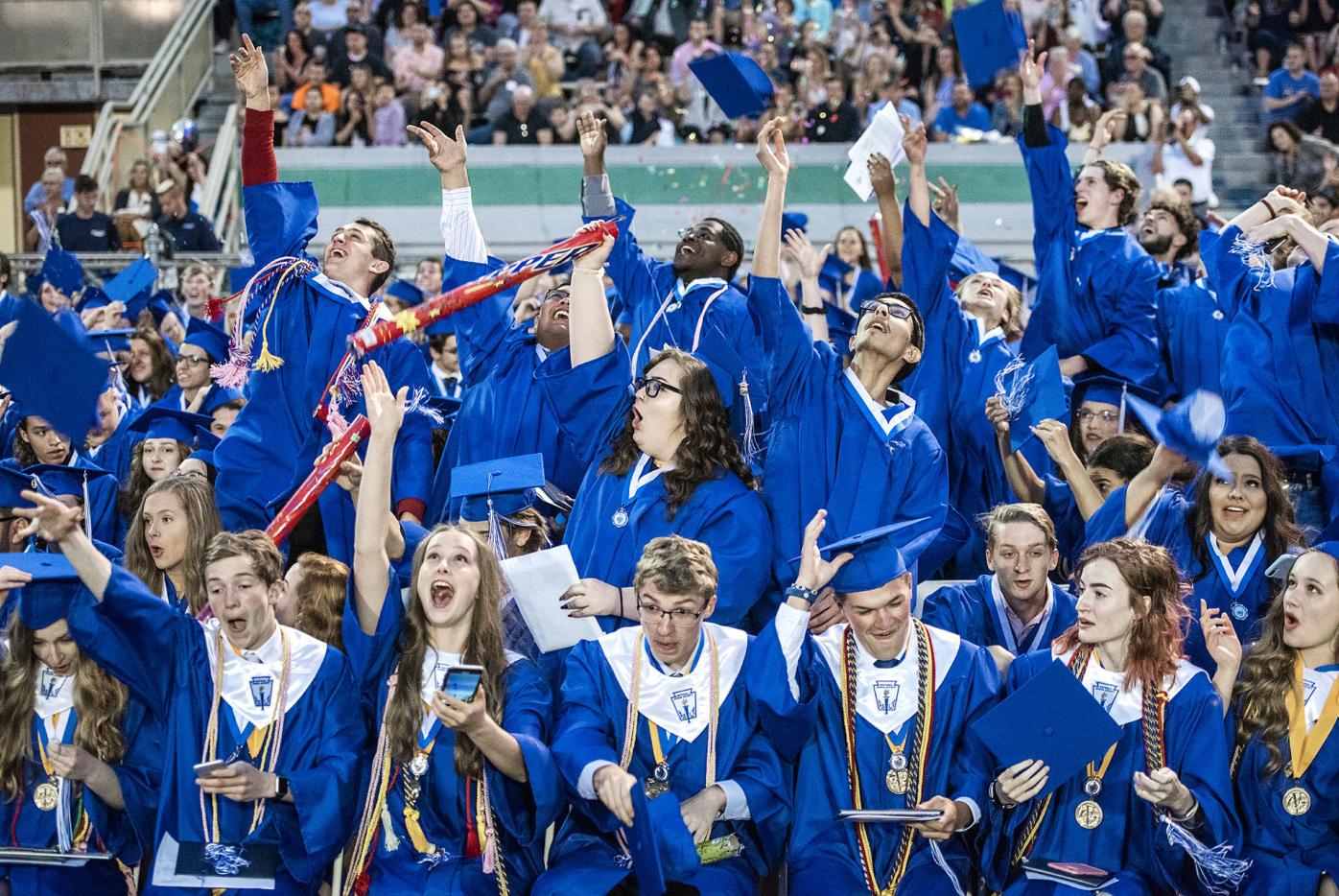 Craig graduates celebrate at the end of the ceremony Thursday, June 6, 2019, at Monterey Stadium in Janesville.

A capella choir member Maeley Heath-Lovell, center, is embraced by Naomi Arellano, left, and Emily Klein, right, after the choir's performance of 'I Lived' by OneRepublic on Thursday, June 6, 2019, at Monterey Stadium in Janesville.

Craig graduates celebrate at the end of the ceremony Thursday, June 6, 2019, at Monterey Stadium in Janesville.

The 2019 Craig High School graduating class is a big one.

It took just one glance at the throng of blue-gowned graduates awaiting their processional entry into Monterey Stadium to make that judgment.

The two-row line of students stretched down a sidewalk Thursday night in Monterey Park, 500 feet west from the shadow of the stadium’s Wedeward-Fagerli press box all the way to Riverside Street, which abuts the mossy-green mudflats of the former Monterey lagoon.

“It’s a big class,” said Craig student Aaron Leverson, a runner-up at this spring's state track and field meet but the very last person in line to enter the stadium. He scanned all 447 of his classmates in front of him and waited for his sister to come to the back of the line to grab him for a quick selfie.

Craig High School Assistant Principal Shawn Kane said it was the largest graduating class Craig has seen since 1982—478 in all, though not all of them walked across the stage Thursday. The class was so large, Kane said, that the school allotted each student a six-person limit on family members they could invite to the graduation.

And for the first time Kane said he was aware of, the school issued tickets to the stadium grandstands to ensure the six-person allotment.

“People sort of had to pick and choose,” Kane said. “It’s just the hand you’re dealt when you’ve got a graduating class that big.”

One female Craig grad near the back of the line knew it. She said she drank two big lemonades at dinner, and she realized with six minutes to go before the procession that the nearest restroom was too far away.

“The next time I graduate from high school, I will not make this mistake again,” she said.

It could take the average person at least as long as it takes 448 graduates to file into Monterey Stadium before they could even hope to solve a Rubik’s Cube.

Not Craig valedictorian Ethan Thompson. He stood in line outside the stadium and torqued away at a Rubik’s Cube.

He solved the puzzle, matching all the colors on each side in about 20 seconds. His record is 11.3 seconds. After graduation, Thompson plans to head to Los Angeles as a missionary and work with the Chinese population there. He said he’s got to have a Rubik’s Cube in his hand in order to feel calm.

The Chinese word for the Rubik’s Cube, Thompson said, is “mó fāng.”

While Thompson sought solace and calm in a Hungarian 3D puzzle, Craig Interim Principal Monte Phillips dipped into Cherokee lore to lay out a lesson on the internal human struggles we all face.

Phillips told of a young Cherokee boy talking to an elder. In the story, the elder tells the boy of the two existential “wolves” that live within us all: An evil wolf of selfishness, anger, bitterness and greed and a good wolf of kindness, humility, peace and compassion.

Which wolf in us shall prevail?

“The one you feed,” Phillips said.

Commencement speaker Ben Lippincott delivered his classmates a string of Romantic advice, some articulate and heartfelt words that hung in the calm, humid evening air as long-winged white pelicans spun under towering thunderheads banking up along the southern horizon.

“Our youth is fleeting, yet our youth is never gone,” Lippincott said, “but the moment, this moment … will always pass before you realize it. Focus on the here and now, and find beauty in everything you see.”

And in order to do that, commencement speaker Taylor Salmon said, her graduating class, 448 strong, must endeavor to embrace each other, eye to eye and face to face—something that's not always a given, Salmon said.

“We heard a lot this year to put the cellphone away,” Salmon said. “We must treasure memories, and those aren’t going to happen staring at a screen.”

B positive blood and attitude: Craig graduate Tayler Passow toughs it out

Class legacy: Craig's 2019 graduates helped spearhead a fundraiser to help the family of a young local child with neuroblastoma, a type of cancer. Students themselves raised $1,000 in an overall $15,000 effort through a penny drive. The penny drive involved some students ransacking the cup holders in their car for as much loose change as they could find, students said.

Janesville Craig High School has announced its Top 20 academic performers for the Class of 2019.