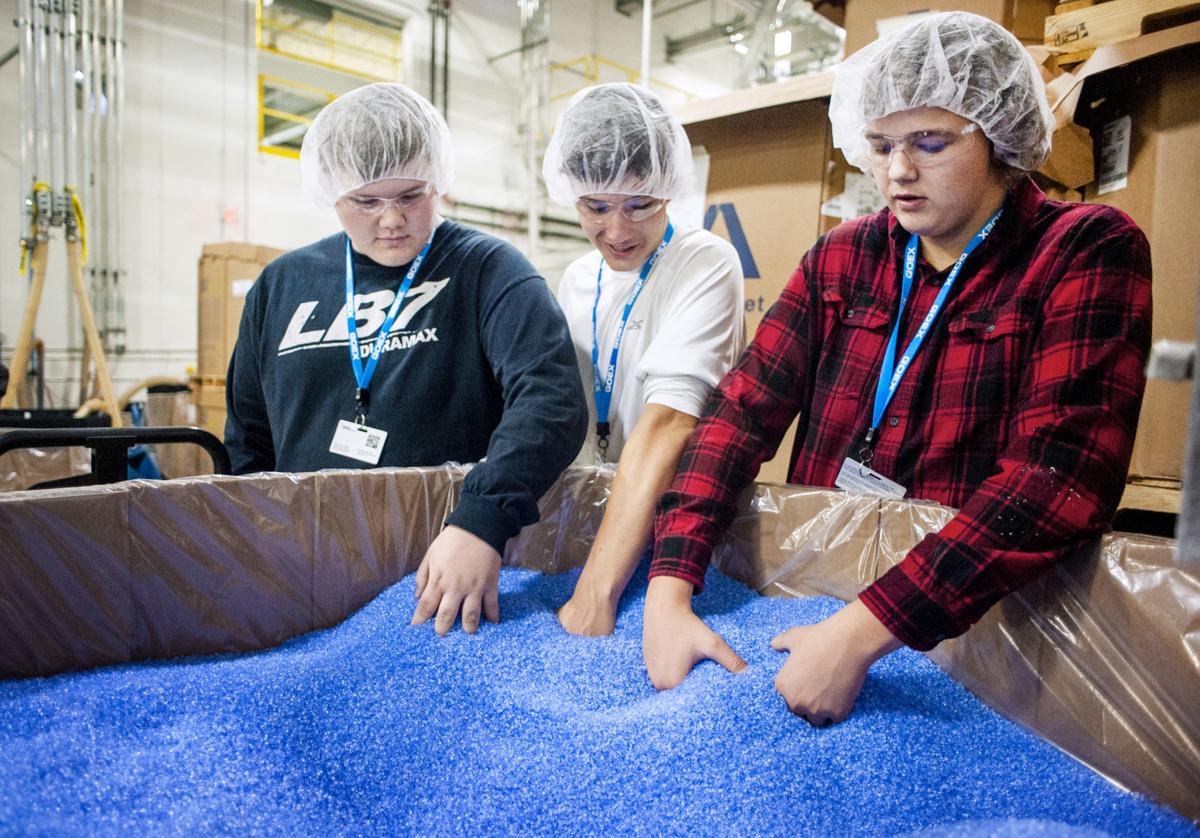 From left, Clinton students John Brandl, Mason Skinner and Dylan Morse feel plastic pellets Friday at GOEX in Janesville. The trio were among about 1,200 students as an effort to kindle interest in manufacturing careers. 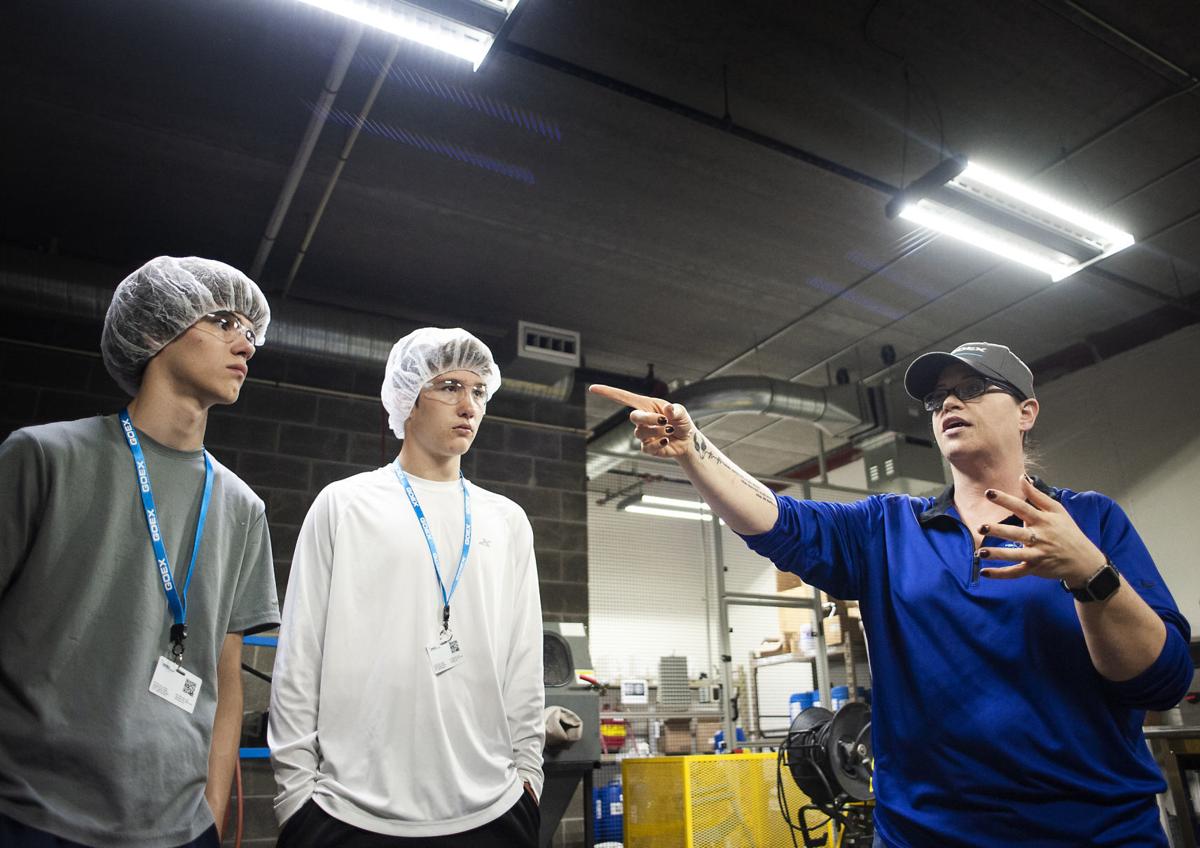 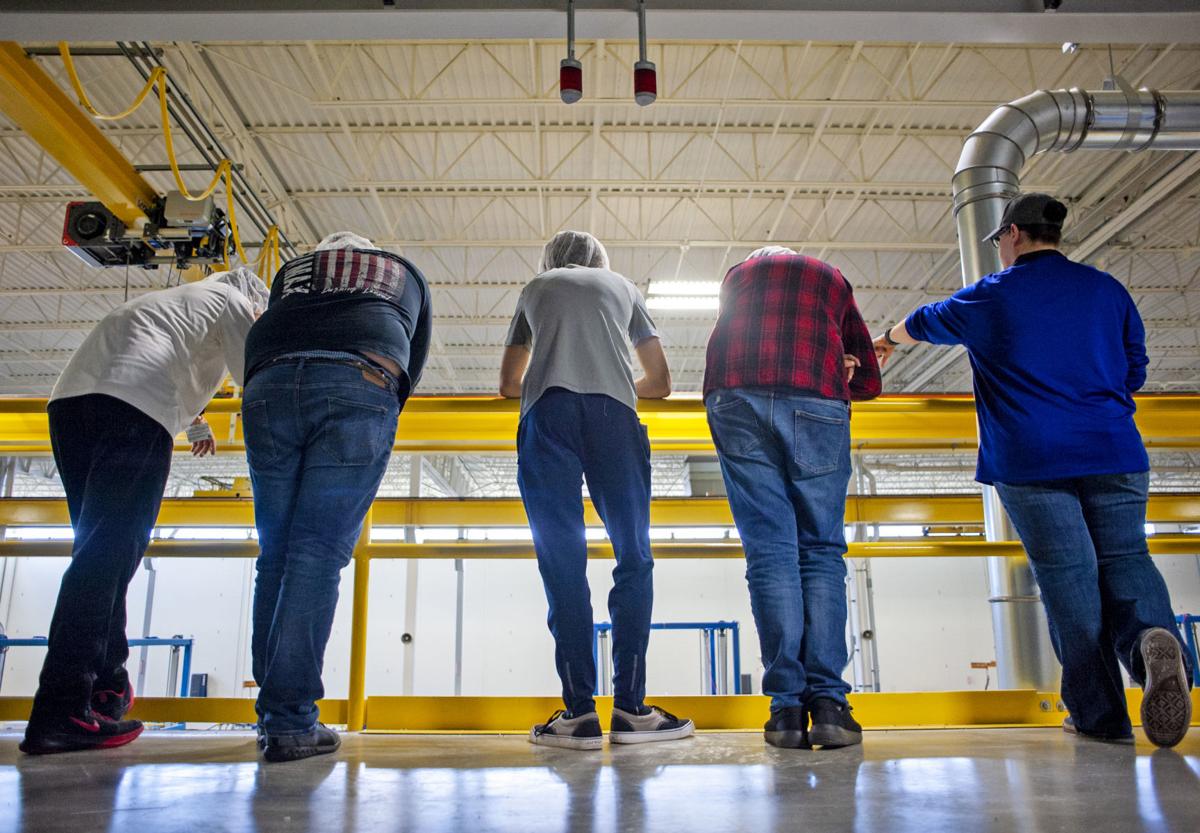 Clinton students look over a ledge to see machinery Friday at GOEX in Janesville. 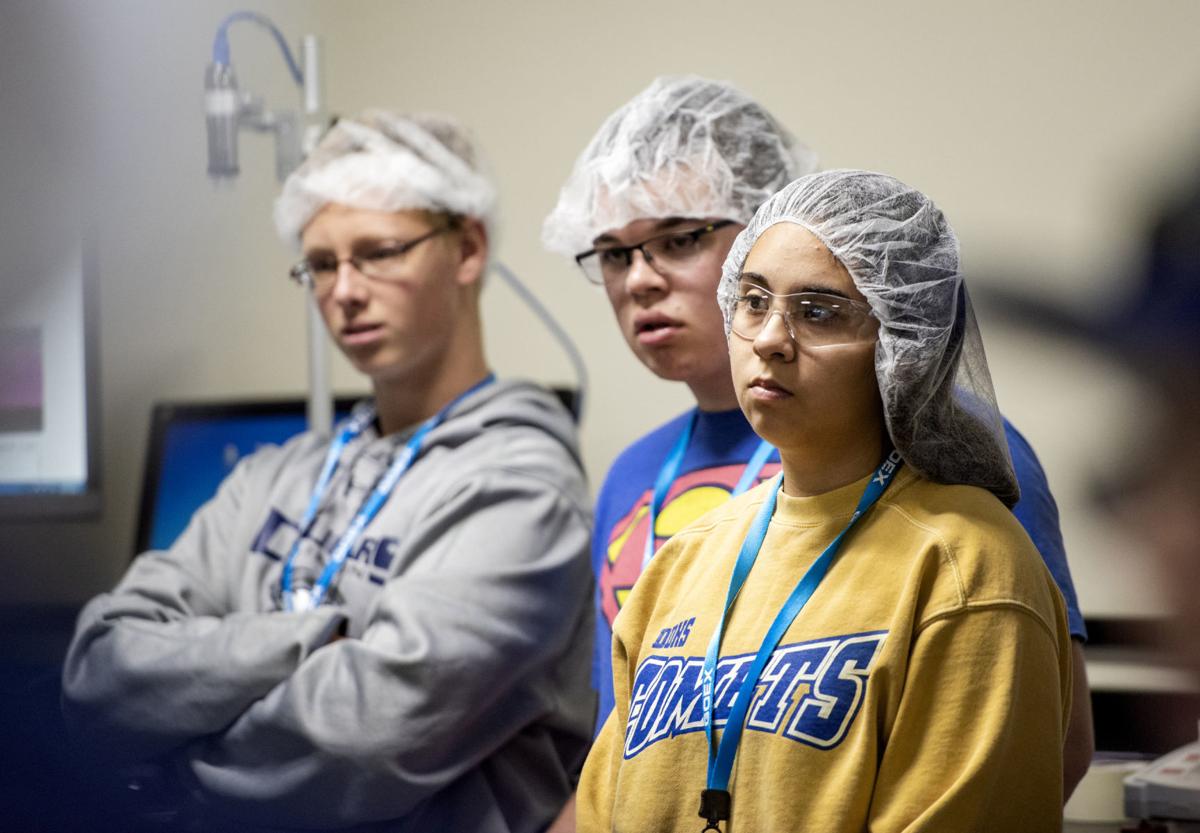 Clinton student Rosalia Perez, right, listens during a tour of GOEX on Friday in Janesville. 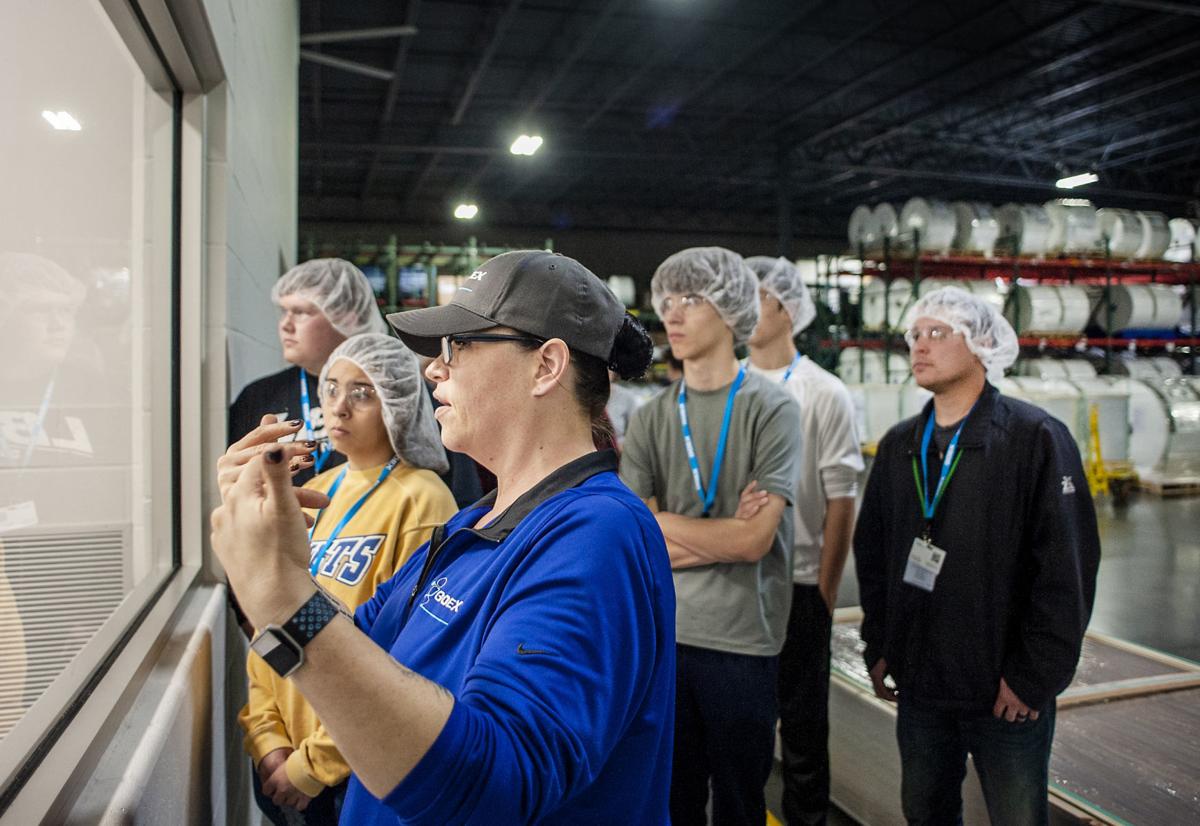 From left, Clinton students John Brandl, Mason Skinner and Dylan Morse feel plastic pellets Friday at GOEX in Janesville. The trio were among about 1,200 students as an effort to kindle interest in manufacturing careers.

Clinton High School student Carlos Arroyo-Orozco sat at a shiny marble boardroom table at GOEX with more than a dozen of his classmates.

He had a Golden State Warriors ball cap twisted down over one of the hairnets GOEX had issued to him and his classmates Friday before they took a walking tour of the plastics extrusion manufacturing plant on Janesville’s north end.

When Arroyo-Orozco learned from a GOEX official how many millions of pounds of plastics the Janesville company produces every year, he did a double take through his eyeglasses.

“Wait ... What?” Arroyo-Orozco said, incredulous over just one knowledge bomb from a local manufacturer that he and his classmates previously knew little about.

In fact, when a GOEX official asked the guests, a group of about 22 Clinton High School students ages 15 to 18, if they’d ever been inside a manufacturing plant, none of the students raised a hand.

Arroyo-Orozco was one of about 1,200 local high school students who Thursday and Friday got a shot at hands-on tours of a few dozen local manufacturers who had partnered with Blackhawk Technical College Manufacturing Days.

Manufacturing Days is a once-a-year, two-day immersion BTC uses to try to kindle high school student interest in manufacturing careers and the potential of job training and learning manufacturing skills through enrollment at BTC.

In an address Friday at BTC’s Advanced Manufacturing Training Center in Milton, BTC President Tracy Pierner said manufacturing in Rock County now employs about 14,000 people. The sector has made a steady comeback since the dreary days following the Great Recession and closure of Janesville’s General Motors plant. All told, manufacturing now accounts for the largest slice of jobs in Rock County, and the sector has added about 2,000 new jobs in the last five years, Pierner said.

Manufacturing has outpaced two of the fasted-growing job markets in the county, including the health care field and the distribution and logistics industry, Pierner said. The technical college is seeing massive growth in local demand for manufacturing work that is centered on automation and engineering, and the college has responded by adding new two-year programs in those areas.

Nationally, the manufacturing sector has seen minor slowdowns in hiring over the last few months, in part because of uncertainty involving an ongoing trade war between China and the U.S. Overall, it has gotten harder for companies to fill immediate job openings or launch hiring expansions because historically low unemployment for the last two years has kept the labor pool its slimmest in decades.

That’s no different in Rock County, where Pierner said BTC hopes to ride events like Manufacturing Days to cultivate interest in local manufacturing jobs starting with students who are in high school or even younger.

Overall, Pierner said, 60,000 people in Rock County’s 90,000-person workforce are set to retire in the next decade. That represents unknown thousands in the manufacturing sector alone—a loss of experience and talent that will have to be filled somehow.

That’s why, Pierner said, it’s so important that Blackhawk Tech partners with local manufacturers to host outreach programs such as Manufacturing Days, which was in its third year this year. The 1,200 students who attended events through Manufacturing Days came from more than a dozen local school districts.

Although BTC’s enrollment has continued to grow despite low unemployment, Pierner said, only 10% to 12% of local high school graduates initially enroll at BTC after high school.

A larger share of students venture off to pursue four-year college degrees, and many of those students never complete a four-year program. That’s a factor that technical college officials such as Pierner are quick to seize on as a main culprit in a national student loan debt crisis.

“Dig into the numbers. That is a result of people going away to college and dropping out after their sophomore year, freshman year with student debt and no way to pay it off. And do you know where they come after that?” Pierner said.

He pointed to the walls around him in a classroom at BTC’s Milton campus.

Laura Benisch, a business and marketing teacher and work-based learning coordinator at Clinton High School, was in a hairnet alongside the Clinton students during their tour of the plant floor at GOEX. She said there’s tangible value in immersing students in visits to local manufacturing plants.

Benisch manages high school students who have internships and apprenticeships through local manufacturers that partner with the high school and Blackhawk Tech through initiatives such as Manufacturing Days.

One of her male students landed a high-school internship at SSI Technologies, a manufacturer of high-tech controls in Janesville. The student has since graduated. He now works full time at SSI.

“Here’s what happened,” Benisch said. “He went to a Manufacturing Days tour of SSI. That’s literally how the kid got interested.”