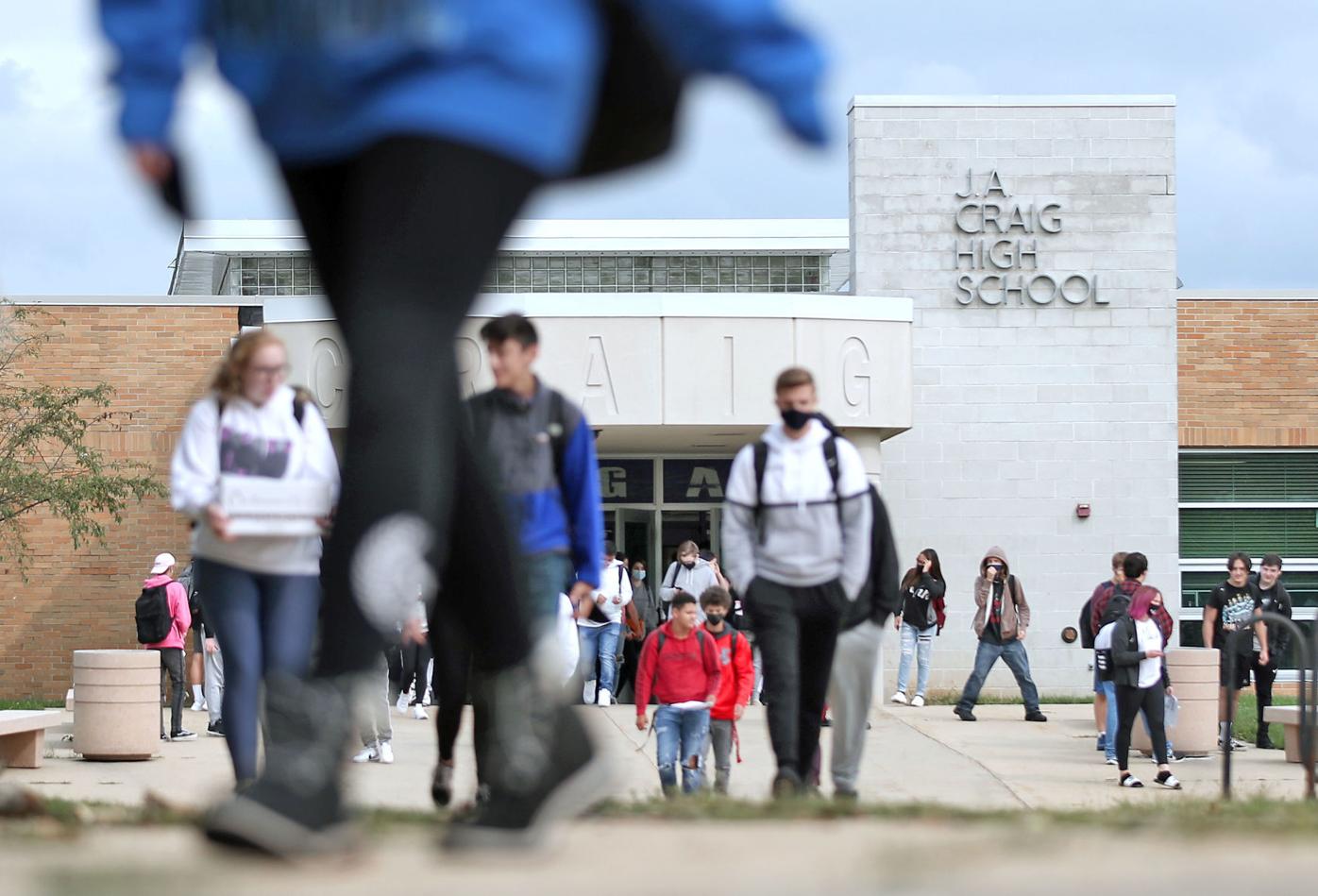 Craig High School students leave school Monday afternoon in Janesville. The Janesville School District told parents that Craig and Roosevelt Elementary School will suspend face-to-face instruction from Monday through at least Friday, Sept. 25, because the schools have positive cases of the coronavirus. 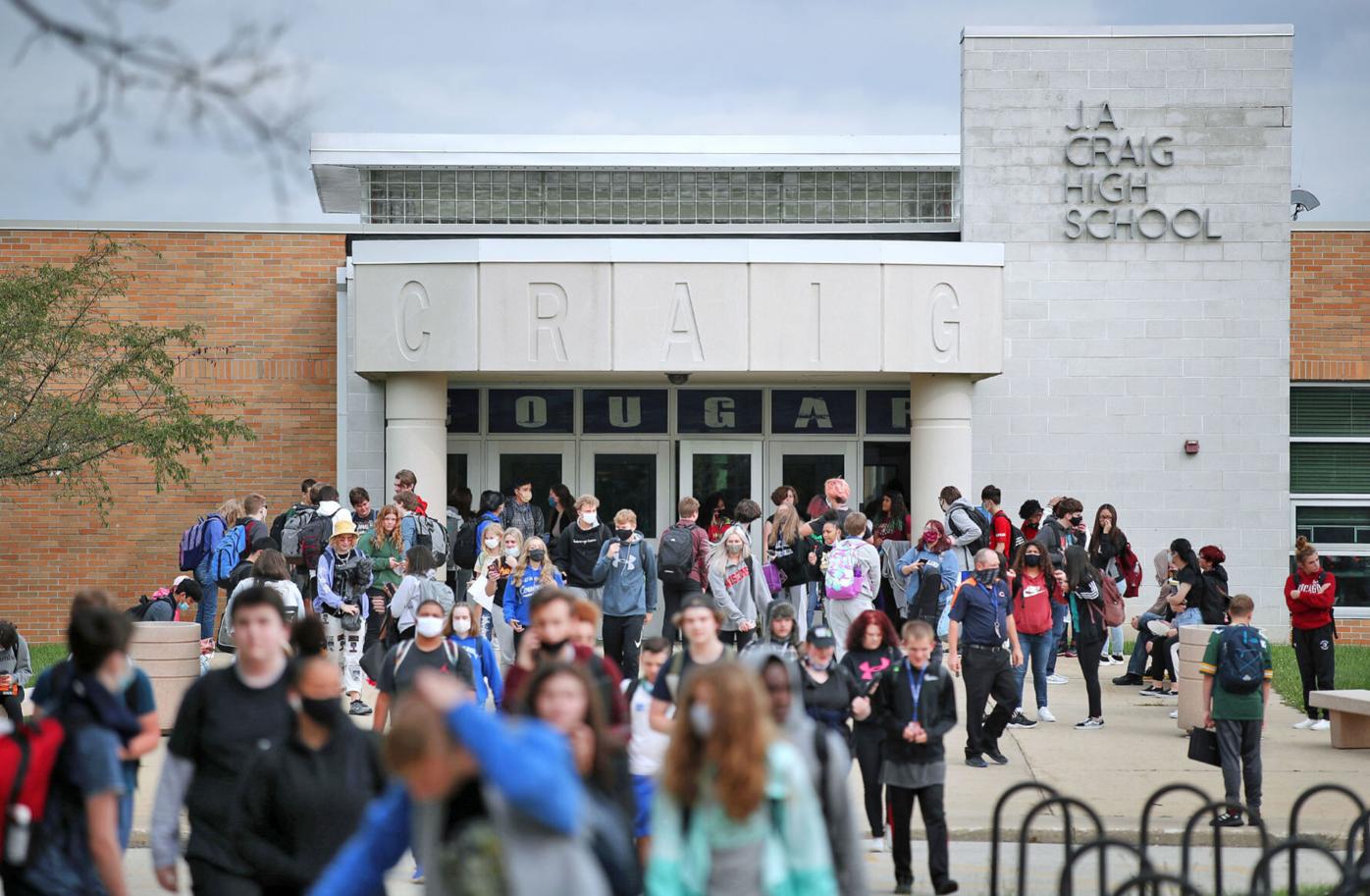 Students leave Craig High School after dismissal Monday in Janesville. The school is pivoting to virtual learning through at least Friday, Sept. 25, because of positive cases of the coronavirus, school district officials announced.

Craig High School students leave school Monday afternoon in Janesville. The Janesville School District told parents that Craig and Roosevelt Elementary School will suspend face-to-face instruction from Monday through at least Friday, Sept. 25, because the schools have positive cases of the coronavirus.

Students leave Craig High School after dismissal Monday in Janesville. The school is pivoting to virtual learning through at least Friday, Sept. 25, because of positive cases of the coronavirus, school district officials announced.

To “prevent a breakout of COVID-19,” the Janesville School District is suspending face-to-face instruction at Craig High School and Roosevelt Elementary School starting Tuesday until at least Friday, Sept. 25, according to a district email to parents.

“The School District of Janesville continues to monitor the situation regarding COVID-19 in the greater community, and is following the protocols/plans put in place with guidance from the Rock County Public Health Department,” the email reads.

“In order to protect the public and prevent a breakout of COVID-19, Craig High School will close face-to-face instruction at the end of the school day today, Monday, September 14, 2020.”

Today will not be a day of instruction, but students and parents will receive more information on how the pivot works and a schedule. Virtual instruction for Craig and Roosevelt will begin Wednesday.

The closure will continue until at least Sept. 25, when the district will re-examine the situation before making a decision.

As of Friday, three students across district elementary schools had tested positive, and six high school-age students had also tested positive. There were additional cases over the weekend that sparked the decision, but district officials didn’t have the exact number of positive tests available from the health department Monday, said Patrick Gasper, district spokesman.

In-person instruction began on the first day of school Sept. 2, when some Craig students shared with The Gazette both optimism and reservations about returning to school.

Craig parents and students interviewed Monday afternoon were split on the pivot to virtual education.

Dylan Dobb spent the last school year at ARISE. He chose the hybrid model this year to get more hands-on help with math and English but said he looks forward to learning online again.

“I was honestly kind of excited,” he said of the pivot. “I think there’s just something about being home that’s nice.”

“I’m going to be honest. I was outraged,” she said. “I was upset because they haven’t been in school, what, six days? … I already know she’s going to be upset about it. She’s just now getting into the school groove again, and now this happens.”

“They need to seriously reconsider this whole situation,” Crain said.

Crain hopes the district will consider allowing special education students to continue learning in person with help from paraprofessionals and their IEPs.

The email to parents indicated the pivot was to “prevent a breakout of COVID-19.” Gasper told The Gazette on Monday he was unsure if the current situation qualifies as an outbreak but said district officials believe the closures are necessary.

“We’re just saying it’s becoming to the point where more and more students are receiving the close contact letters. And so, to prevent further spread, we’re going to limit access and limit interaction,” Gasper said.

The school district in August adopted criteria from the county health department as guidance for when to pivot to virtual instruction, including:

When asked Monday which criteria were met at Craig and Roosevelt, Gasper replied: “For us, it was basically just looking at the numbers after being notified over the weekend. … We were told, and people started having to do contact tracing, and I think that that just played into once you get to a point where you have more students and more people being told to isolate or quarantine at home. It just makes more sense to pivot to an online instruction to keep more people safe.”

Students pivoting will not learn at ARISE, the district’s virtual school. Their current teachers will continue to teach students in an online setting, similar to the pivot that took place at the end of the 2019-20 school year.

Breakfast and lunch will be available for curbside pickup at the high school, beginning today. Students can pick up meals between 11 a.m. and 1 p.m.

The district will work with the county health department before reopening the schools. As of Monday, Gasper didn’t expect other schools to announce closures.

“It’s just a matter of checking in with the Rock County Health Department between now and then to make sure they feel that we would make a sound decision to return to person-to-person instruction,” Gasper said.

The Janesville School Board decided at its July 14 meeting to let families decide which educational model they prefer. The district offers fully in-person, fully virtual through its online school ARISE, and a hybrid model that is a mix of the two.

The hybrid model is unique to each student. For example, one student might have two classes in person and six at ARISE, and another might have four in person and four at the virtual school.

ARISE had 3,097 full-time students and 786 hybrid students as of Thursday. Last year, ARISE had about 250 students.

When positive cases arise, the district plans to identify which schools are affected. However, the district might not identify smaller schools to prevent accidentally identifying the people who tested positive.