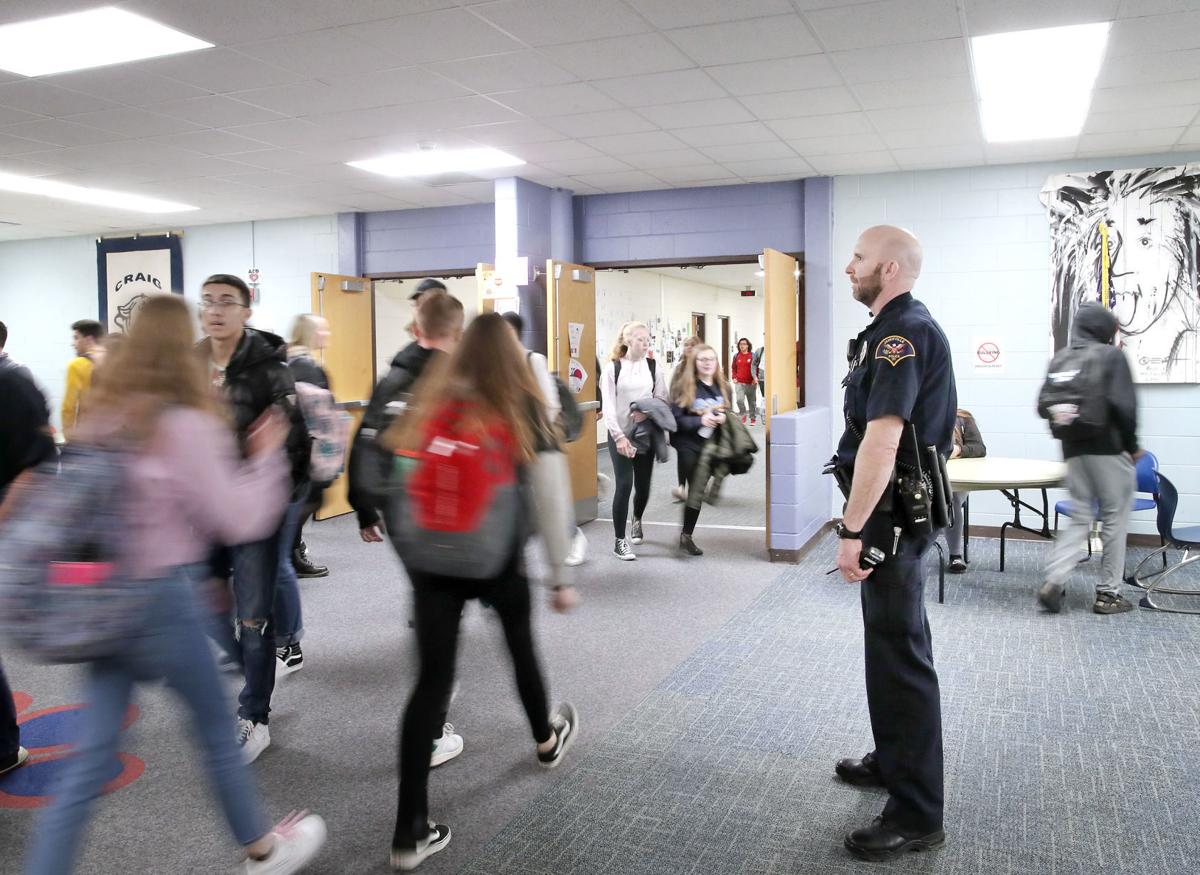 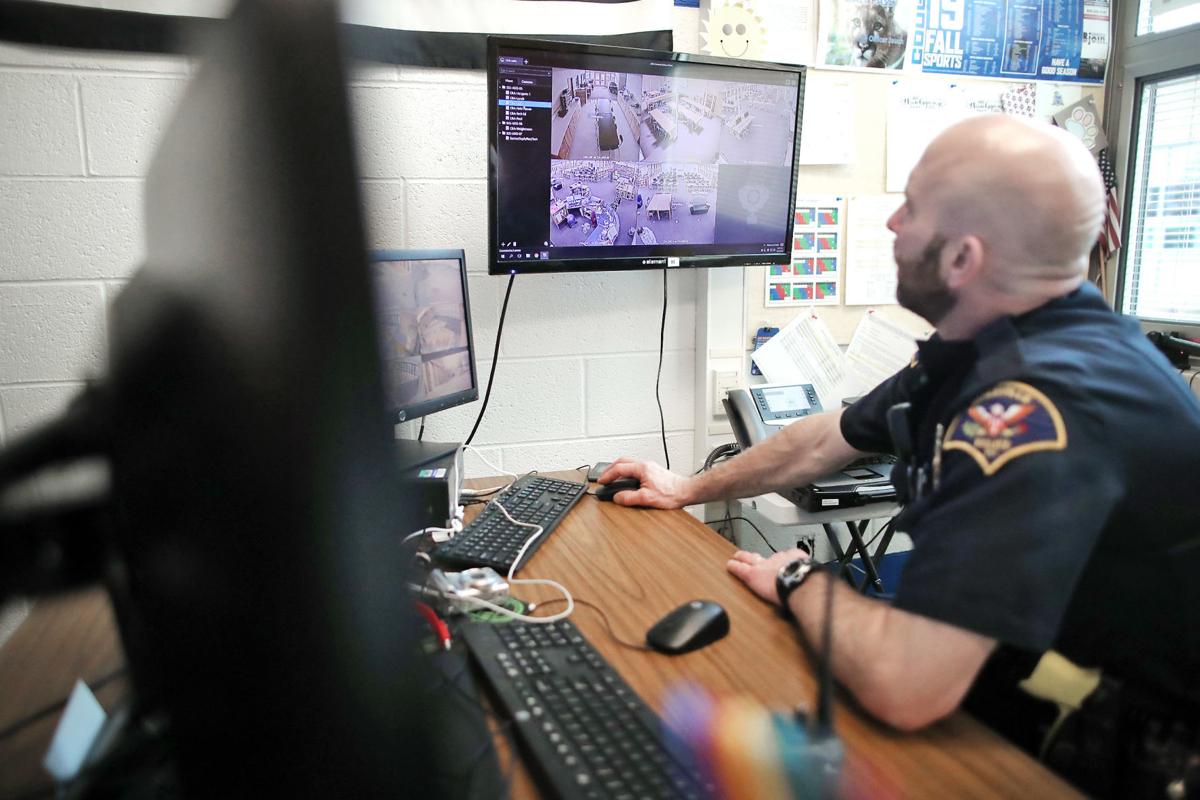 Craig High School police liaison officer Sean Jauch demonstrates how he monitors the school from his office using about 100 cameras positioned throughout the building and grounds. 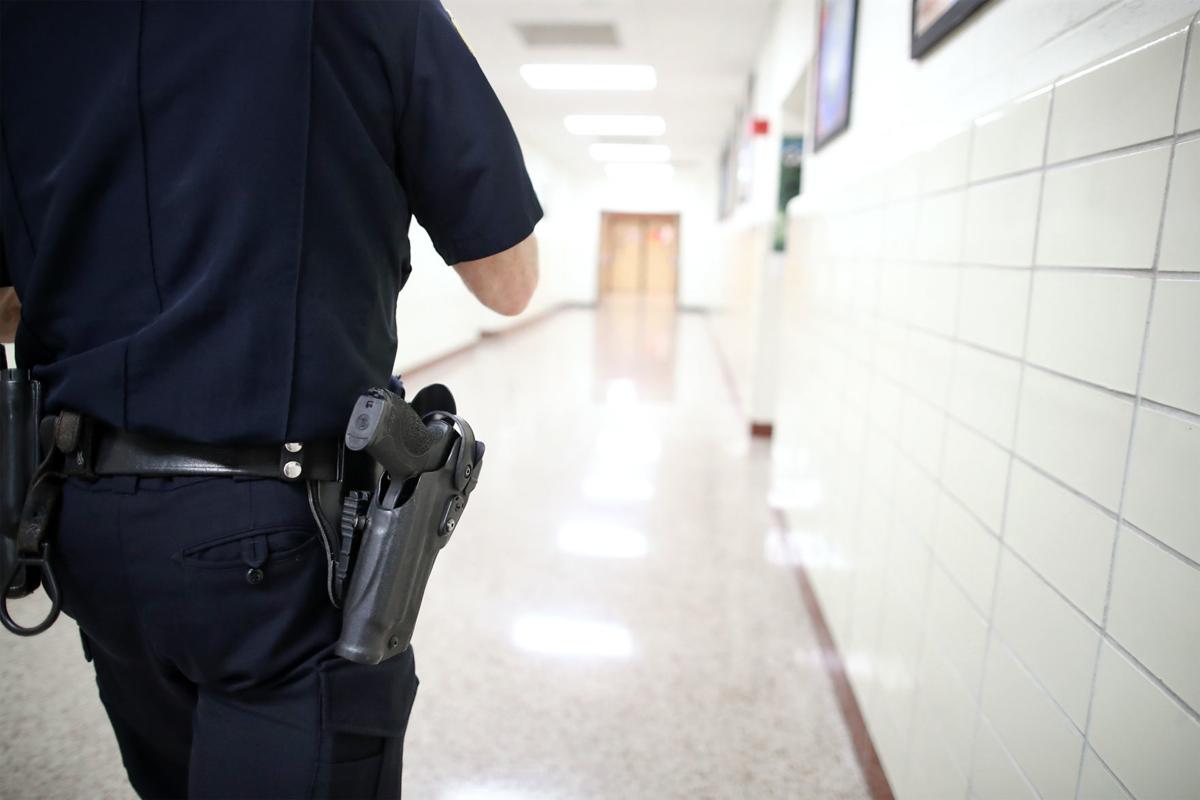 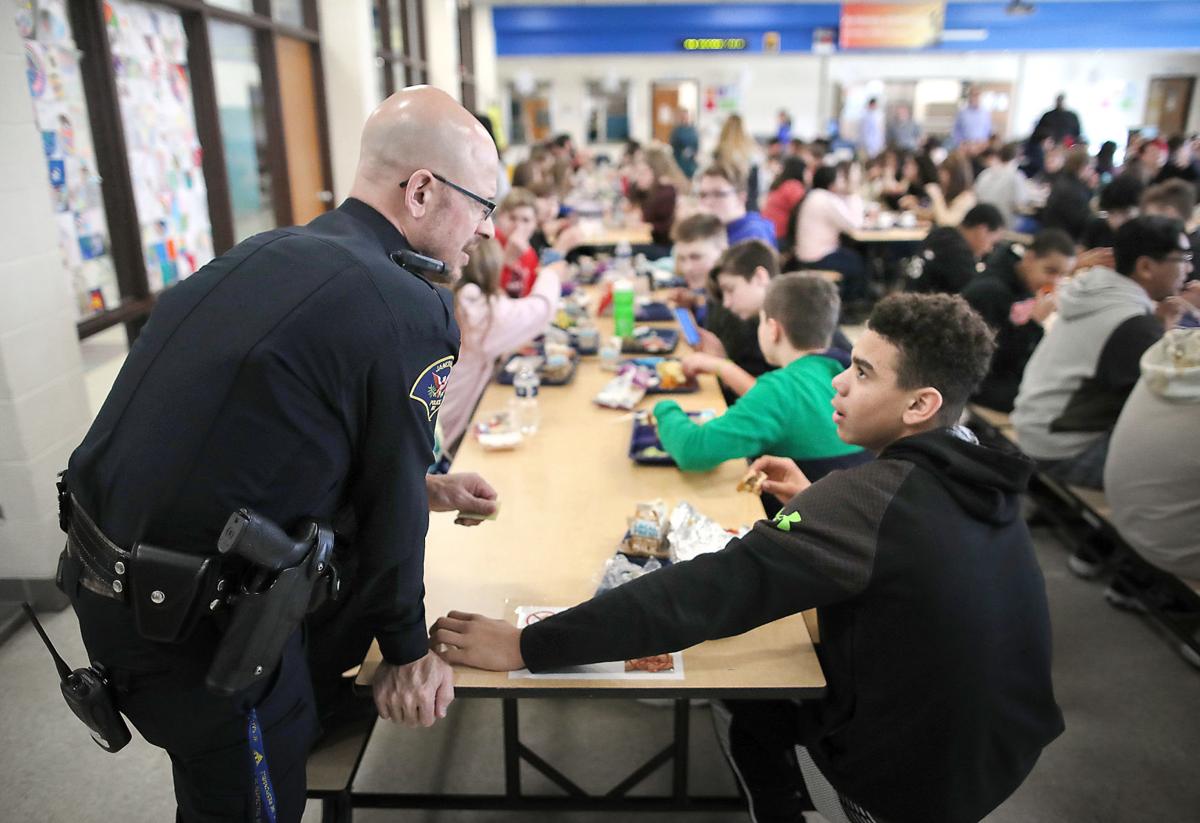 Franklin Middle School resource officer Shane Punzel talks with a student about a dodgeball game he helps coordinate for students annually this time of the year. A school resource office not only serves as a law enforcement officer, but holds many other duties such as being a referral agent to other area resources, an educational assistant and a listener/counselor for school staff and students. 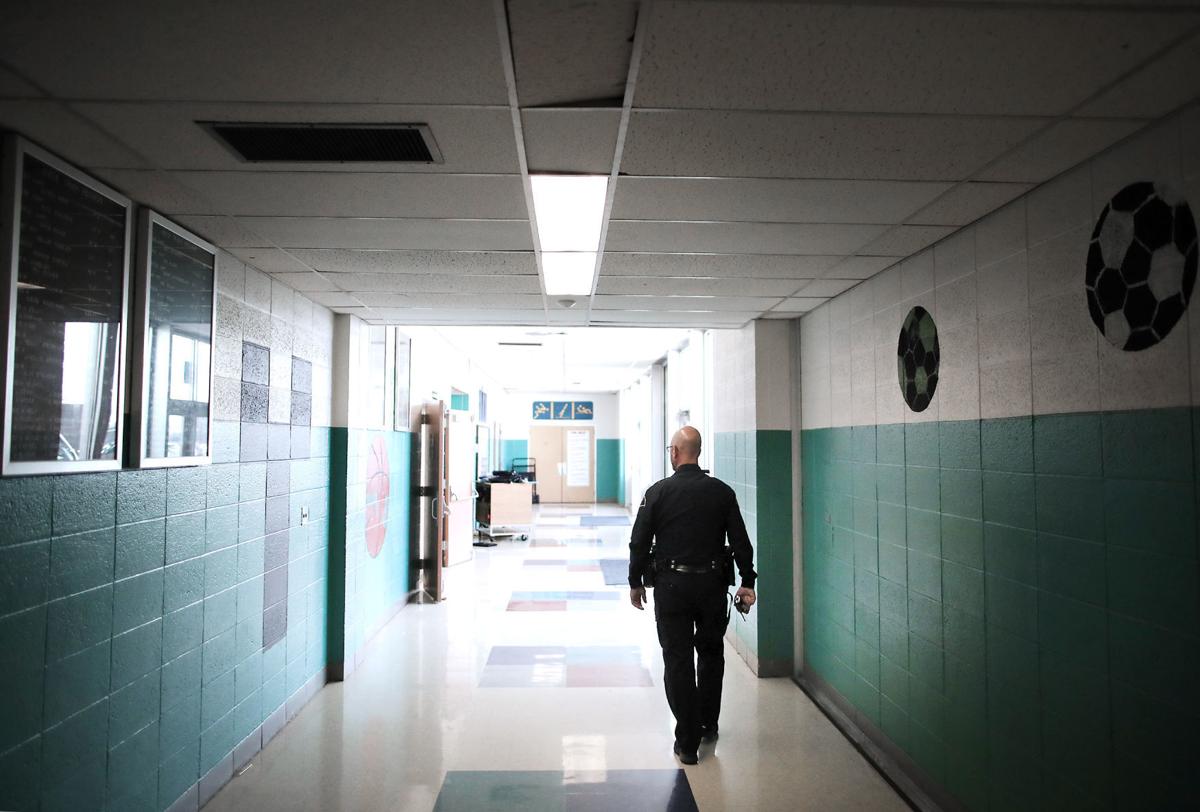 School resource officer Shane Punzel walks through an empty hallway on his way to officiating a post-lunch dodgeball game at Franklin Middle School on Thursday. 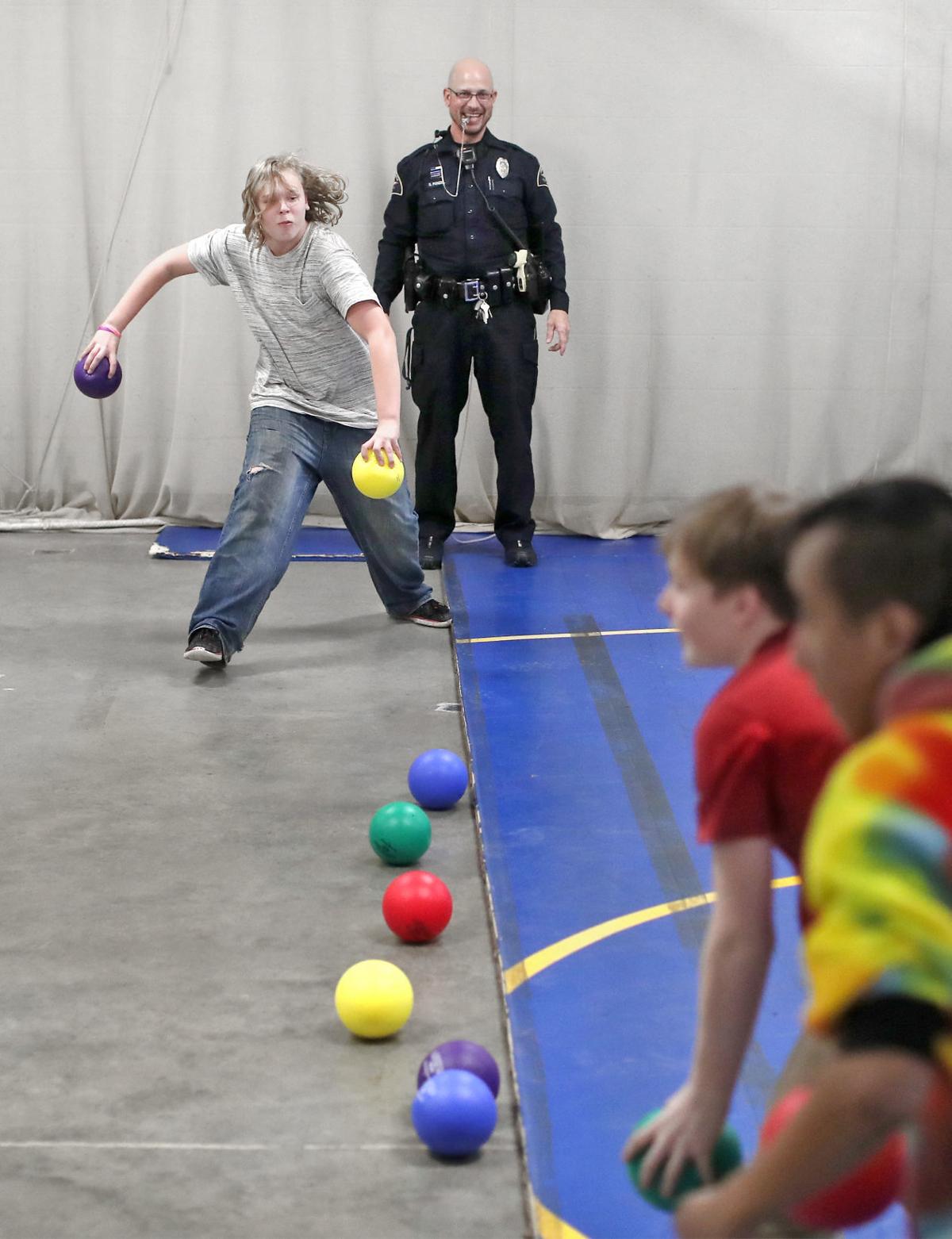 School resource officer Shane Punzel keeps an eye on the dodgeball action while officiating a game in the upstairs gymnasium at Franklin Middle School on Thursday. 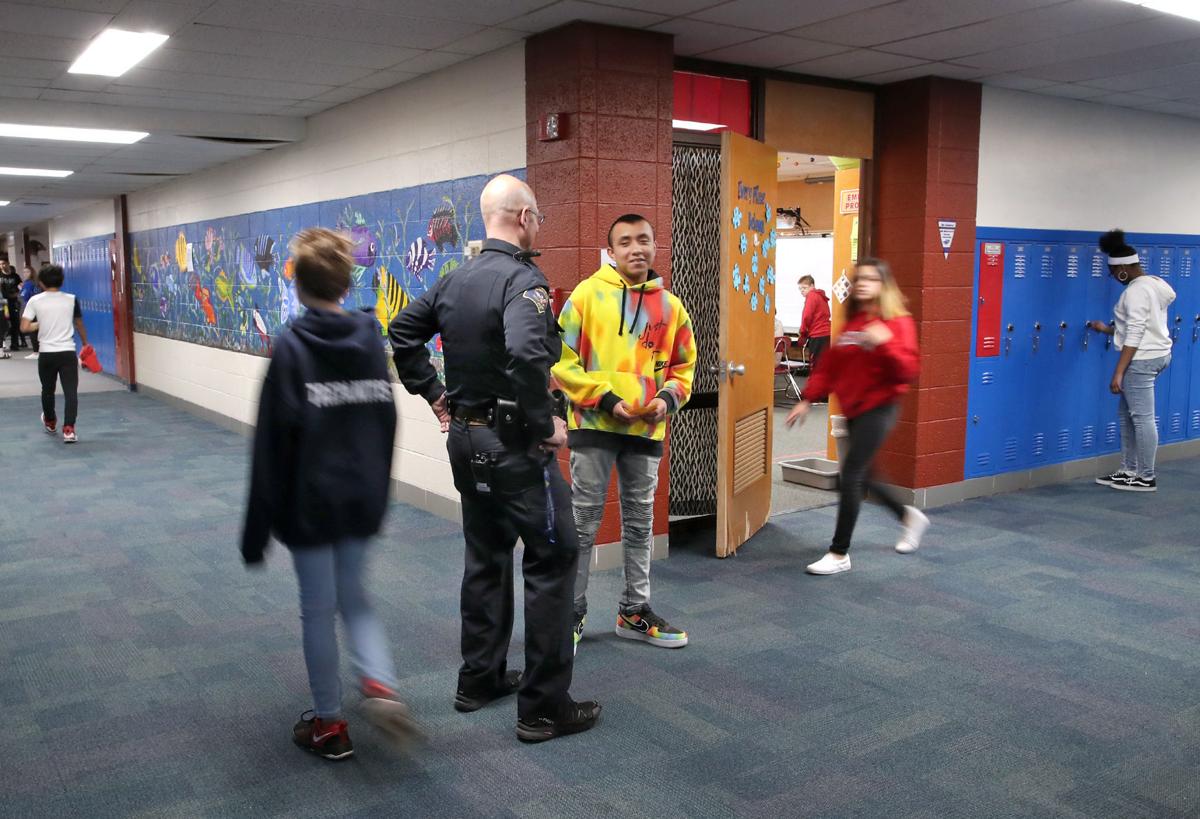 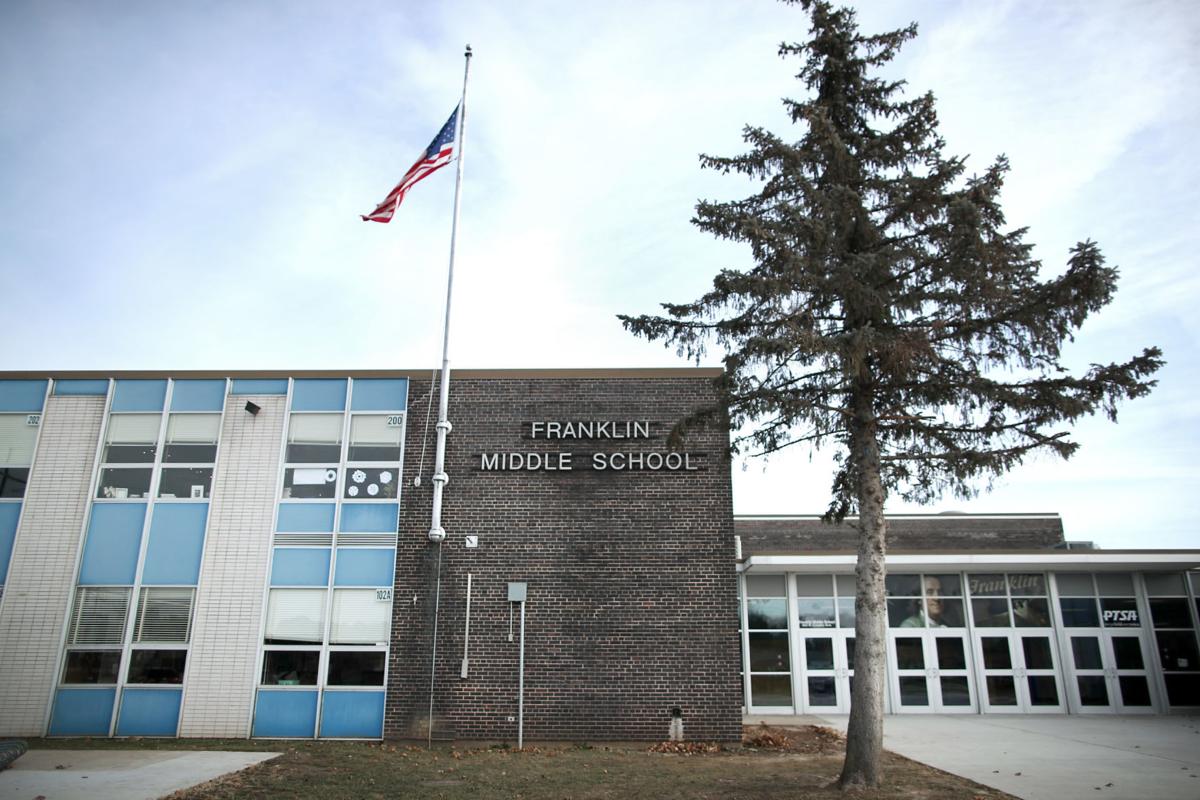 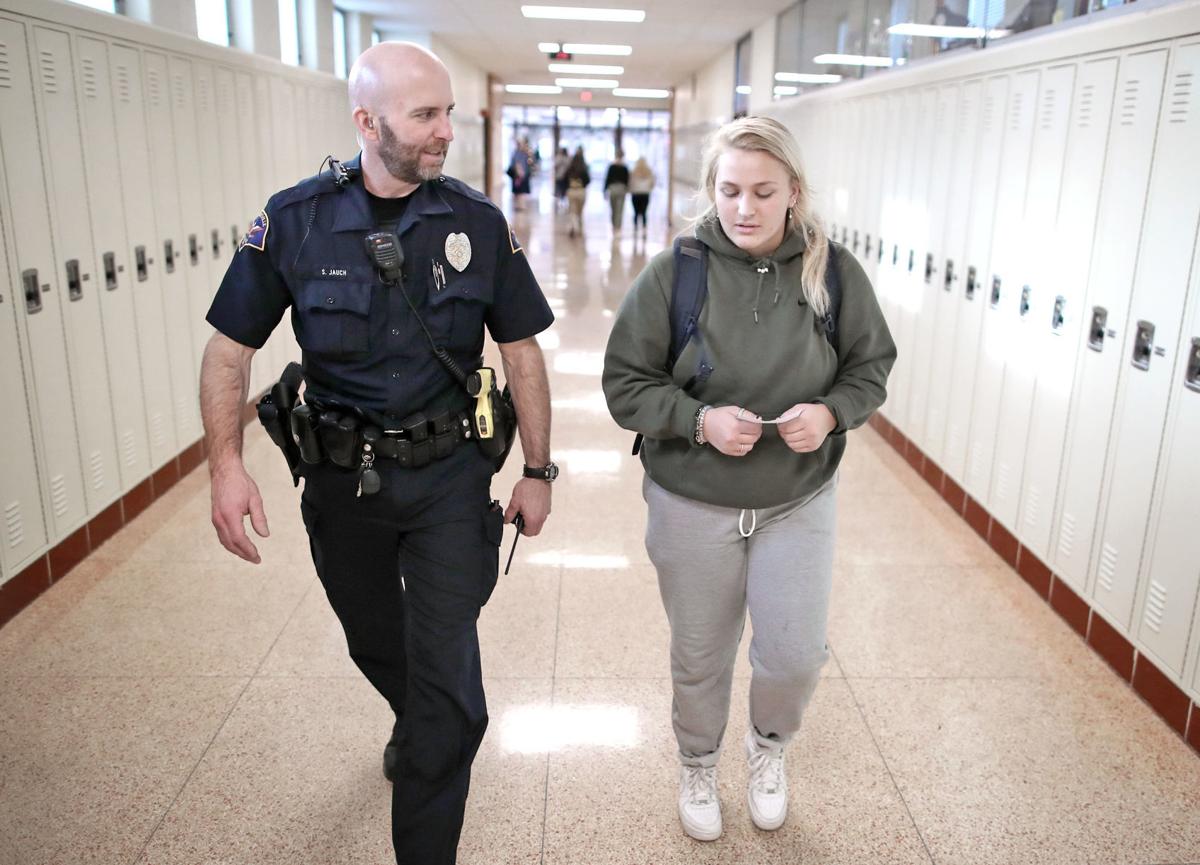 School resource officer Shane Punzel walks through an empty hallway on his way to officiating a post-lunch dodgeball game at Franklin Middle School on Thursday.

Officer Sean Jauch buys his water by the case and shares the bottles liberally.

It’s one way he breaks the ice with teenagers on his beat, Craig High School.

“For three bucks, that’s the cheapest way to make friends,” said the officer, who April 1 became one of the five officers patrolling Janesville School District schools.

Jauch also worries that too many students don’t eat or sleep well and stimulate themselves with energy drinks and whatever is in their vape pens.

In that environment, a bottle of water can have a calming effect, he said.

The Gazette visited Jauch and Officer Shane Punzel at Franklin Middle School last week, days after two of their counterparts in other Wisconsin school districts shot and wounded students during confrontations.

At Waukesha South High School on Dec. 2, an officer shot a 17-year-old student in a high school classroom after the student pointed a gun at the officer, police said.

It was later revealed the student had been pointing a pellet gun that resembled a firearm.

At Oshkosh West High School on Dec. 3, a school resource officer shot and wounded a 16-year-old student who stabbed him during an altercation, police said.

Jauch and Punzel both said a top priority is establishing relationships so students will trust them enough to warn them about a threat and those involved might listen to them as they try to calm things down.

Jauch said he feels a calling to this job and to help set teenagers on the right path.

“I really, honestly, truly want them to succeed,” he said. “… I tell them, ‘I want you to have a job and a living and life you can be proud of.’”

Trouble rears up frequently, Jauch said, sometimes spurred by a scourge of modern teenagers: Snapchat, Instagram or other social media.

Fights are not as big a deal at middle schools, but kids sending inappropriate messages or images on social media “is a huge part of what we do,” Punzel said.

Police data from Jan. 1 through June 11 this year show 151 arrests at the high and middle schools combined.

A minority of the arrests could be for non-school-related offenses because of arrests at the same addresses.

The most common arrests were for truancy, 54, and disorderly conduct, 43.

Those are followed by marijuana possession, 11; battery, 10; tobacco offenses, seven; and disturbing the peace, assault or fighting, six.

Most arrests were at the high schools, 60 for Parker and 57 for Craig.

Often, officers sit with students who need to talk or just get away from the hubbub in the halls.

During Gazette visits, a teacher approached Punzel and asked if he could give a girl “a pep talk.”

During the visit to Craig, a student stopped at Jauch’s office to talk. He has a large office where students often drop in, he said. Another student consulted him about a career in criminal justice.

Both officers noted the recent incidents elsewhere in the state. They were asked if they had thought about the possibility of being in similar situations.

“I certainly have prepared myself to do what needs to be done,” Punzel said, noting his training. “And I know that, 100%, all five of us that work in the schools will do whatever it takes to make sure that the students and staff are safe and taken care of.”

Jauch said he has thought about the potential for having to shoot someone since he began his career 20 years ago, and he has been challenged to think about it through numerous trainings, so much so that he is at peace with it.

In addition to training specific to working in schools, both are on the SWAT team. Punzel trains other officers in how to respond to “active shooters” and school students and staff what to do in those situations. Jauch has been a negotiator and firearms instructor.

Many of the skills he used on the street for 20 years are the same ones he uses in school, Jauch said.

“My goal is to use the skills I have to talk you down rather than to fight you, and, thankfully, I’ve only had to do a few things around here that have been use-of-force type of things,” Jauch said.

Punzel said he had not heard from students about the Waukesha and Oshkosh incidents.

A few students approached Jauch with concerns, “and I just told them it’s obviously why I’m here, and I’m doing everything I can possibly do to keep you guys safe. ...

“I do think it crosses their minds a lot. I think probably the parents are worried at times,” Jauch continued. “I would hope that they would be more confident with a guy that works hard and tries to keep it as safe as possible, and they see me staying late and coming in early.”

Janesville police officers have been stationed in the city’s middle and high schools since 1992, first teaching Drug Abuse Resistance Education.

Their beats are the size of some villages with hundreds of residents.

“We are the police officers of our small communities,” Punzel said.

They wear their uniforms, complete with sidearms, Tasers and handcuffs.

The officers connect students to social services, which can range from sources of food and shelter in the community to in-school counseling.

Both use their schools’ “closets,” where clothing and daily essentials are stored for homeless or otherwise needy students.

Punzel enlisted the Daniels Foods Sentry store to stock the shelves. The store sells “Friends of Franklin” bags that customers can buy and donate for $5.99. Well over 300 are donated each year.

Social media is one of the most common complaints they deal with, they said.

But Job 1 is safety. Officers look for internal and external threats, handle any criminal activity and make arrests when needed, working hand-in-hand with teachers, administrators and other staff.

“They’ve got great kids, here, even the ones I’ve had to arrest,” Jauch said. “… If I’m not holding people accountable every day, I’m not doing my job.”

Officers monitor dozens of cameras that cover large portions of their schools and grounds.

Pophal in the letter reminds parents of security procedures in place and notes every classroom contains a crisis response guide “that covers situations ranging from kidnapping and assaults to medical emergencies and mass casualties.”

Punzel said the only time he has had to take a weapon from his belt in the six years at Franklin has been to show off his Taser during the electricity unit in seventh-grade science classes.

But the possibility they might have to draw down on a student is always there.

“I have kids in school, too,” Punzel said. “I wish we lived in a world where we didn’t have to do lockdown drills at the schools. We don’t live in that world, so I am proud that in the School District of Janesville, all the buildings, all the administrators and all the officers of the Janesville Police Department are prepared to a level to make sure that everybody is taken care of.

“We take it seriously. We train to it numerous times throughout the year … So when I hear that happening in other communities, I know that we are doing the right thing with the preparation in our community, and I’m proud of that.”

School police officers are featured in a 2017 Janesville School District video about emergency procedures that can be accessed at GazetteXtra.com/schoolvideo. School resource officers begin appearing at 4:00. Discussion of active shooters by Officer Shane Punzel begins at 7:15.