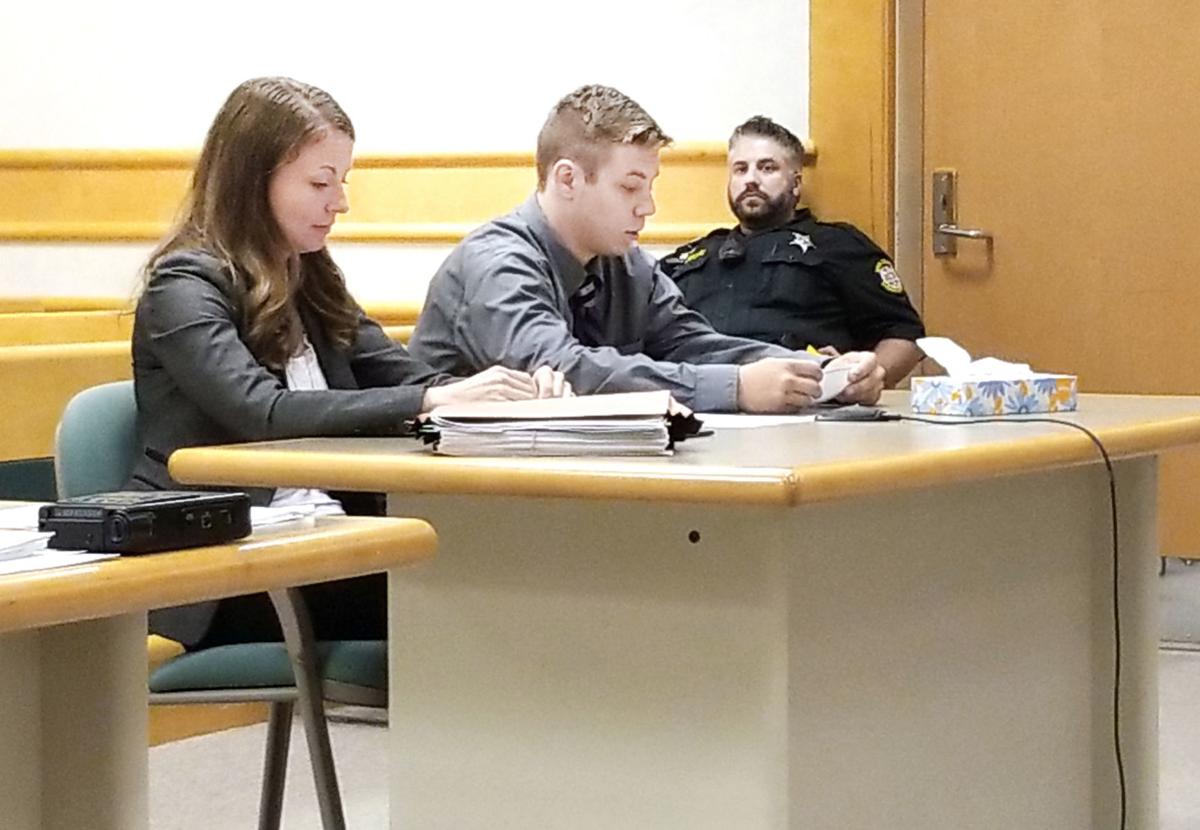 Skylair Buckham reads a statement during his sentencing while sitting next to his attorney, Shanna Knueppel, on Thursday at the Rock County Courthouse in Janesville. 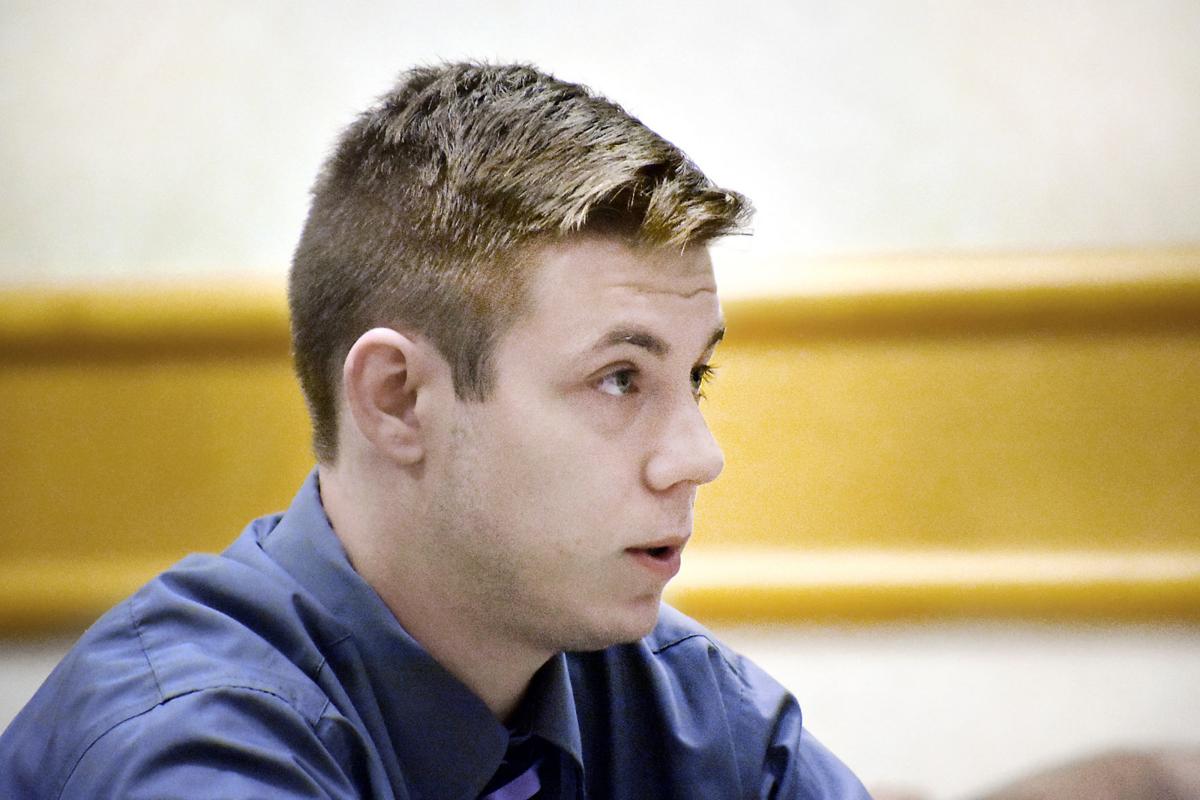 Skylair Buckham is sentenced Thursday in Rock County Court to 10 years in prison for driving under the influence of drugs and alcohol leading to the death of his friend, Lukas Christofferson of Stoughton, on a rural road last year.

Skylair Buckham reads a statement during his sentencing while sitting next to his attorney, Shanna Knueppel, on Thursday at the Rock County Courthouse in Janesville.

Skylair Buckham is sentenced Thursday in Rock County Court to 10 years in prison for driving under the influence of drugs and alcohol leading to the death of his friend, Lukas Christofferson of Stoughton, on a rural road last year.

Lukas Christofferson was still alive in the early morning hours of March 31, 2018. He was alone and bleeding.

The car he was riding in had gone off Dorner Road west of Footville at high speed and hit a tree so hard that it burst both windshields.

The driver, Christofferson’s friend Skylair A. Buckham, had left the scene.

They suggested Buckham might have saved his friend if Buckham had just called 911. He did not.

A passerby found Christofferson, still alive, at about 2:20 a.m. No one knows how long he had been there, injured, in the dark, Buker said.

The 19-year-old from Stoughton died at a hospital 13 days after the crash.

Buckham, now 22, of 4807 E. Milton-Harmony Townline Road, said he did not remember what happened or how he left the scene. Phone records show around 4:40 a.m., he called his girlfriend several times, and he ended up at her home in Monroe, where deputies found him.

Buckham and Christofferson had been drinking and taking drugs at a party in Brodhead before the crash, said defense attorney Shanna Knueppel.

“Neither one of those boys was in any condition to drive that night,” Knueppel said.

Buckham pleaded guilty to homicide by driving with a controlled substance in his blood and hit-and-run resulting in death. A charge of homicide by intoxicated driving was dropped.

Christofferson’s mother, father and sister spoke in court Thursday of the agony and grief they continue to suffer.

Lukas’ mother, Linda Christofferson, said her son was managing a store and was planning to study auto mechanics at Madison College.

A customer who didn’t know the family sent them a letter after his death, telling of a young man who always went the extra mile at work, adding, “He had a spark of life that was exceptional and very endearing. I will miss his sense of humor and dedication to his job. … He had what it took to go far.”

Linda said she has anxiety attacks most days.

“Every time I hear a siren, my heart skips a beat,” she said.

“I hope one day I can forgive you, for myself, because I can’t live with this hatred,” said Lukas’ sister Kathryn.

Bob Christofferson, Lukas’ father, called Buckham’s abandoning of Lukas a cowardly act: “You left your friend to die and focused on yourself. …

“I cannot forgive you at this time,” Bob said, calling for more than 10 years in prison.

“You never gave Lukas a chance,” Bob said. “You should not get one, either.”

Buker said humans’ instinct is probably to save themselves, “but human beings are supposed to do better than that and get past the instinct for self-preservation, to look out for other people. … We should do that even more if the hurt person is our friend, or if we’re the person who caused the hurt.”

Buker argued passionately for punishment. The Department of Corrections recommended six to eight years in prison. Buker called for 10.

Knueppel argued just as passionately for giving her client “a second chance.”

It’s unlikely anything good would come of sending the young man to prison, Knueppel said, noting that prison can increase the chance of more crime.

Lukas’ family members can never get justice for their loss, no matter how long the prison sentence, Knueppel said

“The only chance that something redeeming comes out of this situation is if Skylair has an opportunity to become something more, someone more than he was the night of that accident,” Knueppel said.

Knueppel asked for a year in jail with probation or a short prison stay.

Buckham called Lukas “an amazing friend” who deserves justice. He said every night he asks himself why God took Lukas and not him.

The pain of losing Lukas is “so deep some nights you wish you just won’t wake up,” Buckham said.

Judge Karl Hanson said Knueppel made a strong argument, but it’s not a foregone conclusion that prison would be a negative for Buckham.

But Hanson said he didn’t believe Buckham’s version of events, and he noted the great harm Buckham caused and a need to protect the public. He also cited a need to deter Buckham and the community in general from such behavior.

Hanson imposed a sentence of 10 years in prison plus 10 years of extended supervision. On Buker’s urging, Hanson ruled Buckham must maintain absolute sobriety for the second 10 years.