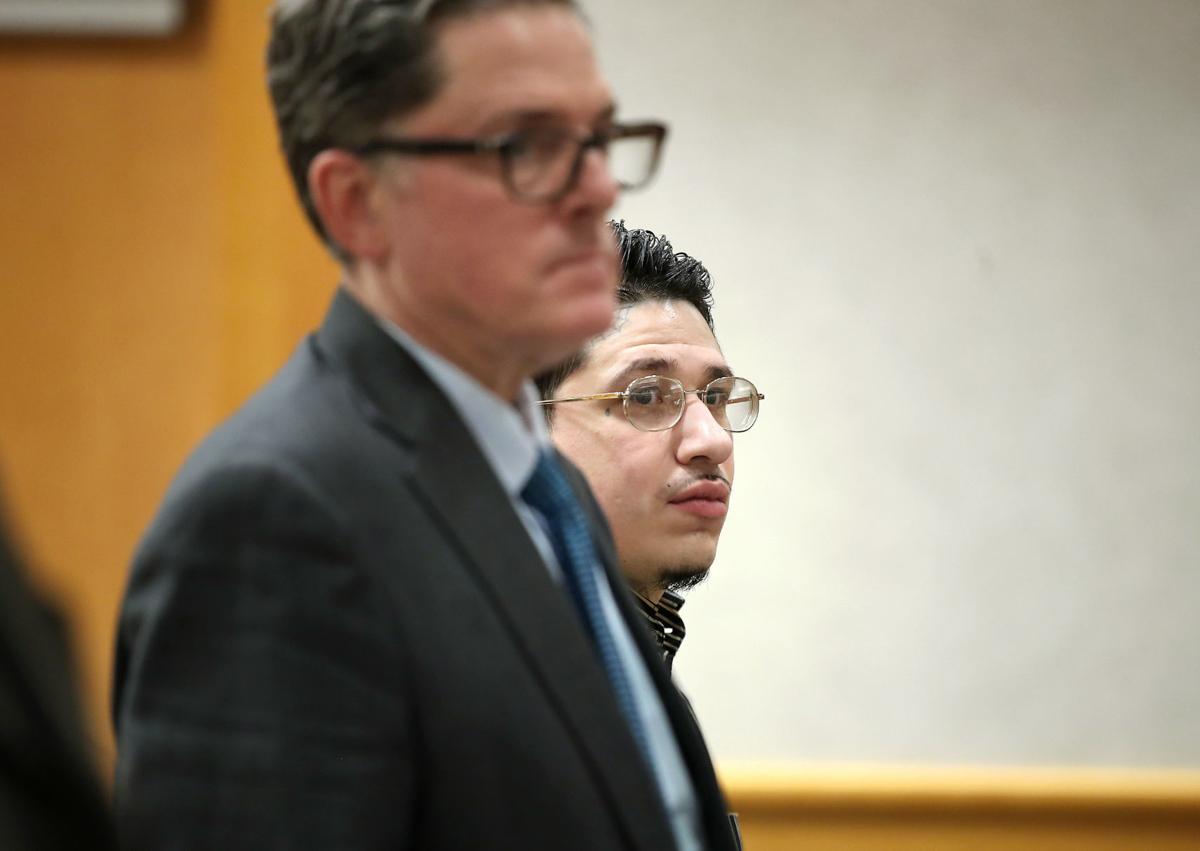 Julian Collazo and defense attorney Jeffrey Jensen watch as the jury leaves the room after a mistrial was declared Thursday by Rock County Judge Barbara McCrory because of the jury’s inability to reach a decision. 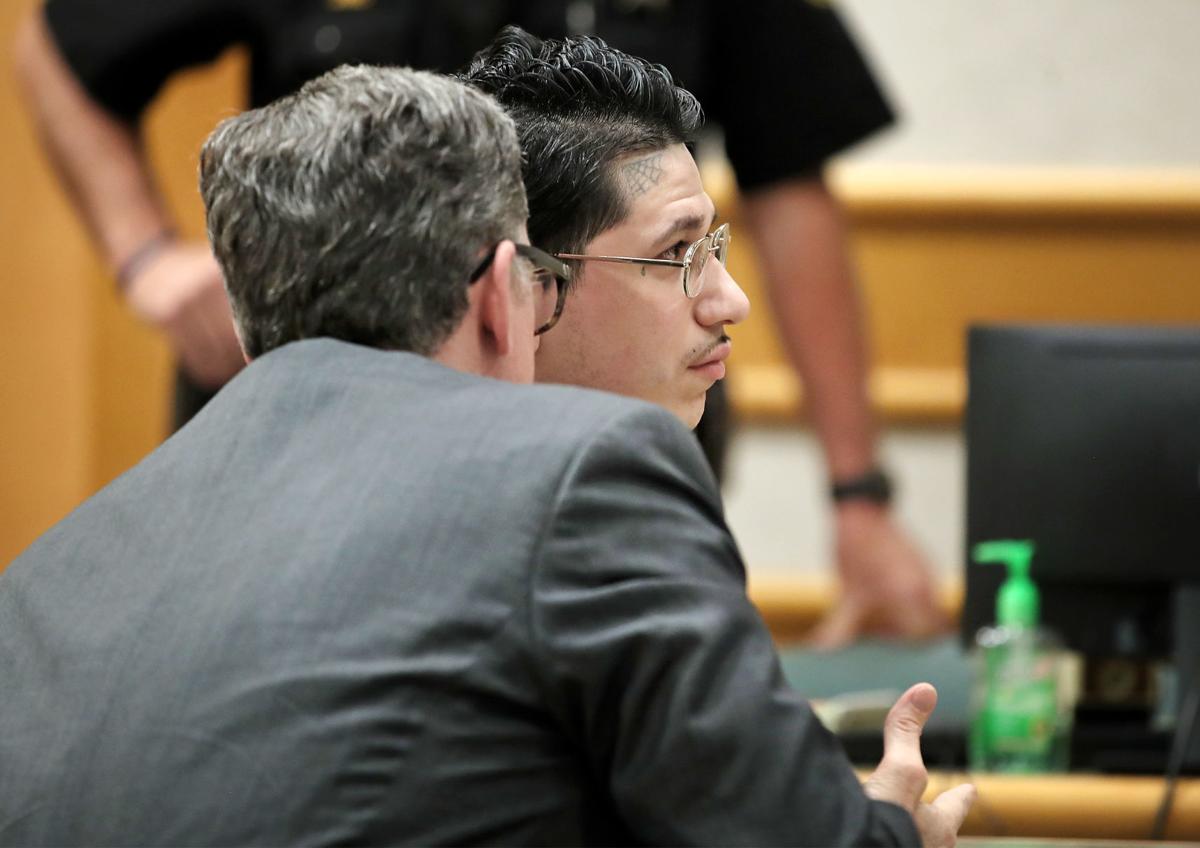 Defense attorney Jeffrey Jensen leans over to talk with Julian Collazo after a mistrial is declared by Judge Barbara McCrory at the Rock County Courthouse in Janesville on Thursday. The situation among jury members was described as ‘toxic’ by bailiff Jonnie Johnson, with claims of physical threats made between jurors. 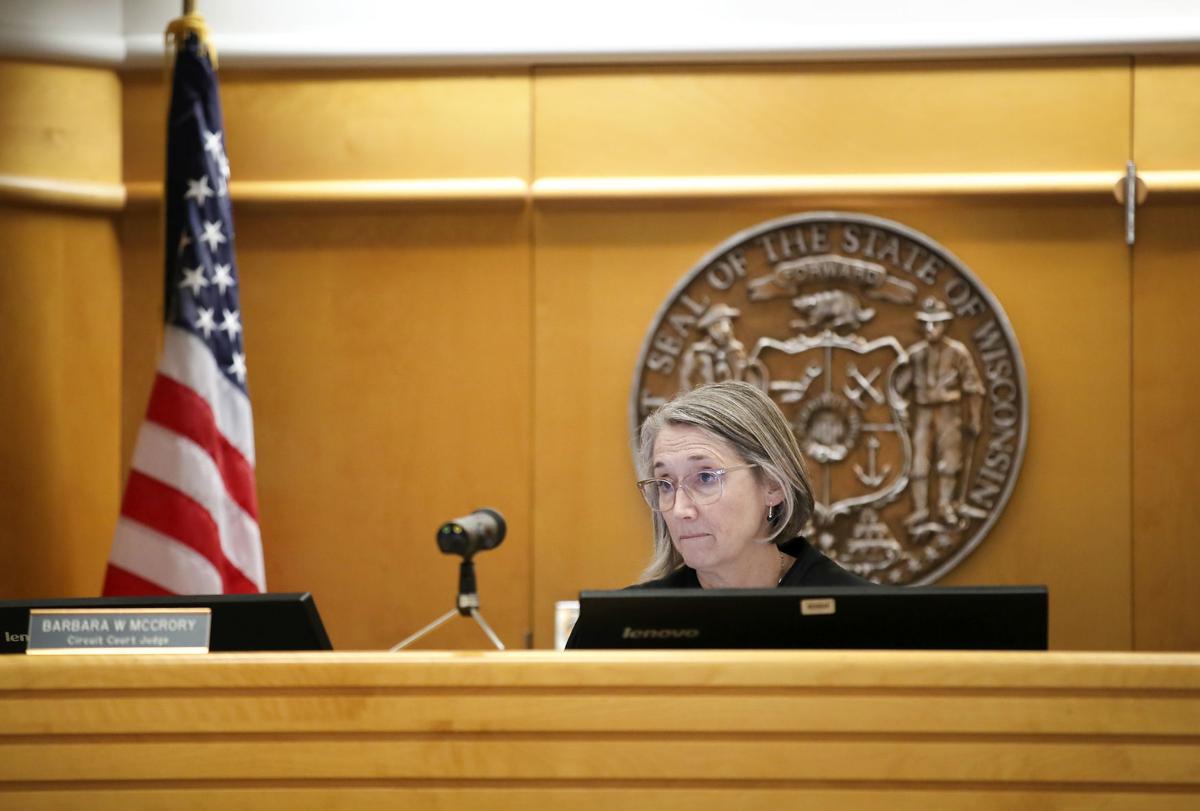 Judge Barbara McCrory declares a mistrial in the case against murder suspect Julian Collazo at the Rock County Courthouse in Janesville on Thursday. 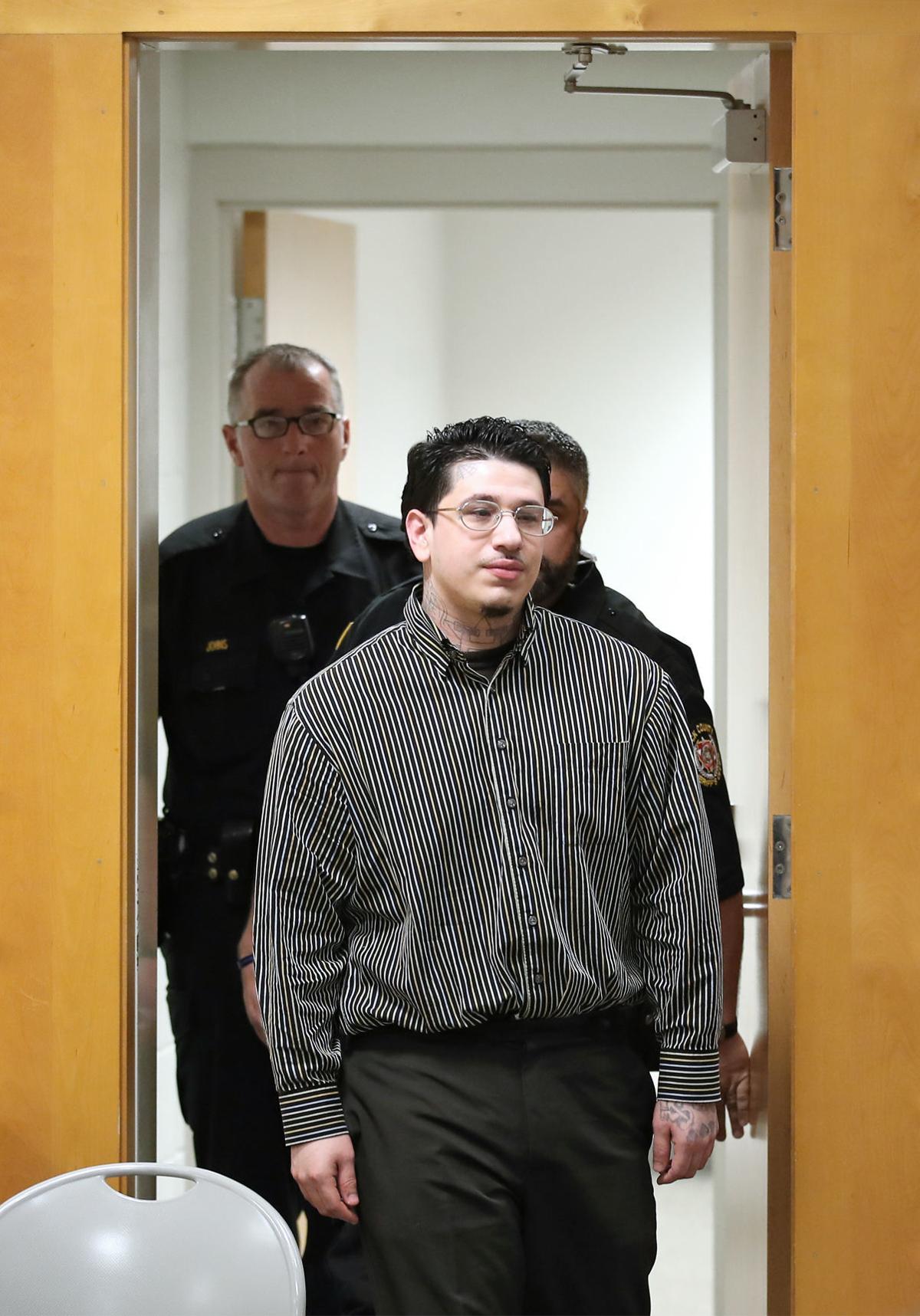 Julian Collazo enters the courtroom during his murder trial at the Rock County Courthouse in Janesville on Thursday. Judge Barbara McCrory later declared a mistrial. 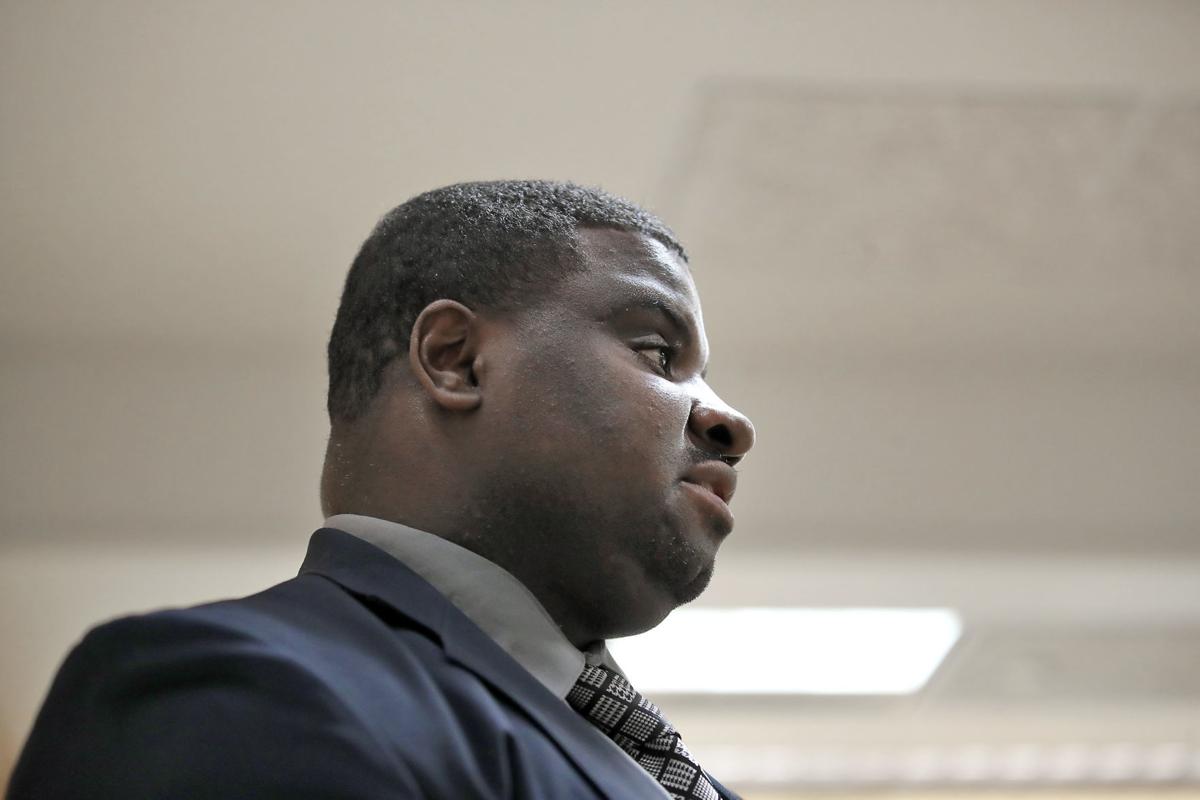 Bailiff Jonnie Johnson describes the atmosphere among jurors as ‘toxic’ when asked by the judge during the murder trial of Julian Collazo on Thursday at the Rock County Courthouse. Judge Barbara McCrory declared a mistrial because the jury could not reach a verdict. 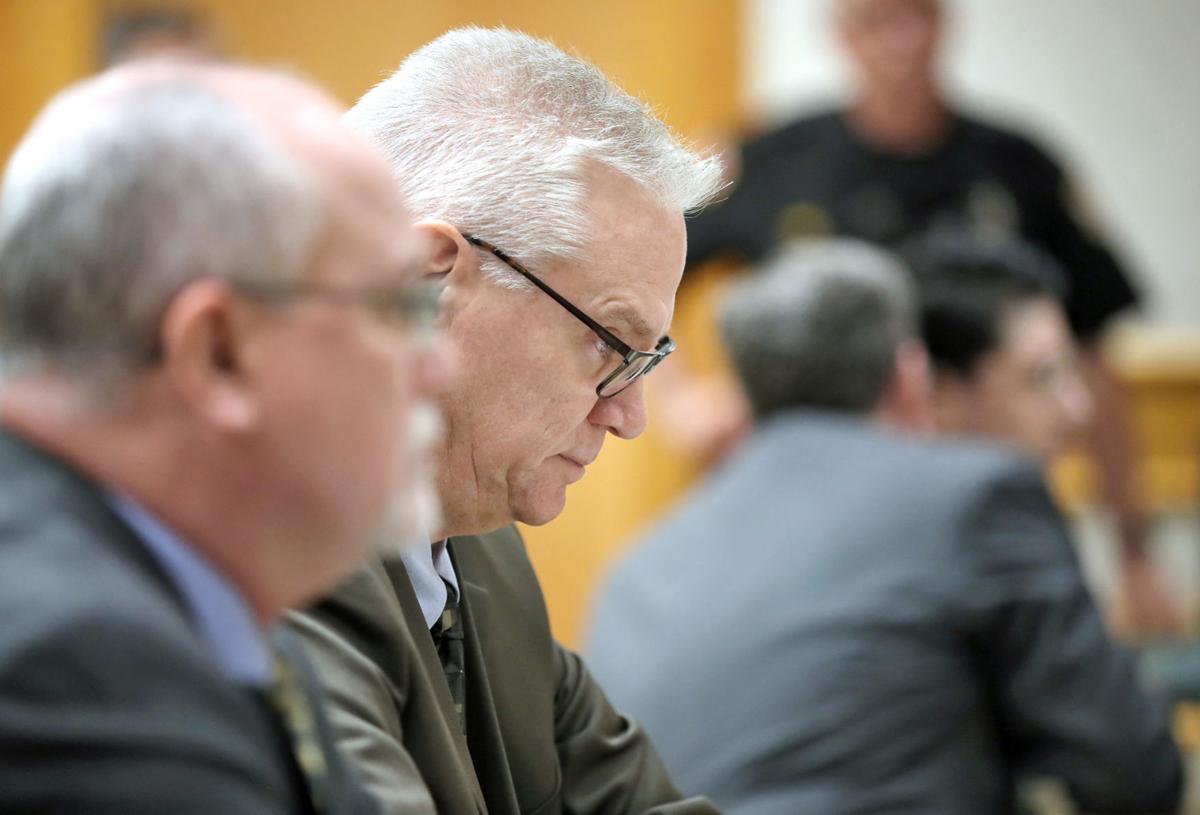 A Rock County jury was in a “toxic” situation with tension getting so heated jurors had to be separated while they debated evidence in a murder case, a bailiff said Thursday afternoon.

Physical threats were made, and jurors were crying, leading the bailiff to believe jurors could not talk to each other, let alone make a unanimous decision, bailiff Jonnie Johnson told Rock County Judge Barbara McCrory.

The tension prompted McCrory to declare a mistrial in the murder case against Julian Collazo.

McCrory asked the jurors if they believed they could make a decision. Each said “no.” Multiple jurors were seen crying or wiping away tears in court.

The mistrial declaration was made about 12:50 p.m.

A mistrial means the case is not done, but this jury is, McCrory said.

Another trial could be held or the two sides could reach a settlement. In the meantime, Collazo will remain in jail, defense attorney Jeff Jensen said.

The defense could ask for a reduced bond for Collazo, but it is unlikely that would be granted, Jensen said.

McCrory earlier Thursday said jurors were having a difficult time coming to a unanimous decision and were having the same arguments they were having Wednesday night before being sent home.

One of the jurors, Robin Bugner, said after the trial the divide among jurors came down to “interpretation of the law,” and more specifically about “aiding and abetting.”

She said Thursday’s result was a “letdown.”

“It wasn’t the outcome that I had hoped for,” she said. She declined to elaborate on that and the toxic culture of the jury.

A few of the other jurors declined to comment.

Among the formal instructions given to jurors was one about aiding and abetting or being “party to the crime.” It states the jury could find Collazo guilty even if the jury believed he only helped or stood ready to help commit the murder without directly committing it.

In addition, all 12 jurors did not have to agree whether Collazo directly committed the crime or assisted in committing it. If they all agreed he did one or the other, they could have found him guilty of first-degree intentional homicide, according to the instructions.

The jury asked McCrory on Wednesday night to clarify the “party to the crime” language, but she was not allowed to do so. She told them they must do the best they could with the written instructions.

McCrory said the jury reflects the attitude many have in the country these days, refusing to have conversations with people they disagree with.

Jensen said in his 34 years as an attorney, including hundreds of criminal jury trials, he has never seen a jury be considered toxic.

Jensen was contacted by the Rock County public defender’s office to represent Collazo and is being paid by the state for his services, he said.

Both sides put a lot of work into the trial, Jensen said. He believes O’Leary asked for a status conference in hopes a settlement could be reached.

After the jury started to deliberate Wednesday afternoon, attorneys discussed the possibility of a plea agreement. Collazo rejected that idea, attorneys said in court Thursday.

O’Leary told the judge Thursday morning he and Assistant District Attorney Scott Dirks discussed with Jensen on Wednesday night whether there was any way to settle the case.

Collazo told McCrory he was not interested in settling.

Collazo would face life in prison if convicted on a charge of first-degree intentional homicide in the death of Christine Scaccia-Lubeck of Janesville on Dec. 8, 2017.

Scaccia-Lubeck was found stabbed at her Janesville home Dec. 9. Prosecutors have said she was stabbed 32 or 33 times.

In his testimony Wednesday, Collazo, 22, said he had been having sex regularly with both Scaccia-Lubeck and Nicole Kazar, 25.

The defense argued that Kazar killed Scaccia-Lubeck in a fit of jealous rage when Collazo brought Kazar to Scaccia-Lubeck’s house that Friday night.

The prosecution has argued Collazo committed the murder to prove his loyalty to Kazar and to show he could protect her.

Jensen said he spoke to Collazo after the trial, but he would not share the details of the conversation or Collazo’s reaction. Jensen said he is disappointed the jury could not reach a decision.

The defense on Wednesday presented its version of events when a woman was stabbed to death in her Janesville home in December 2017.