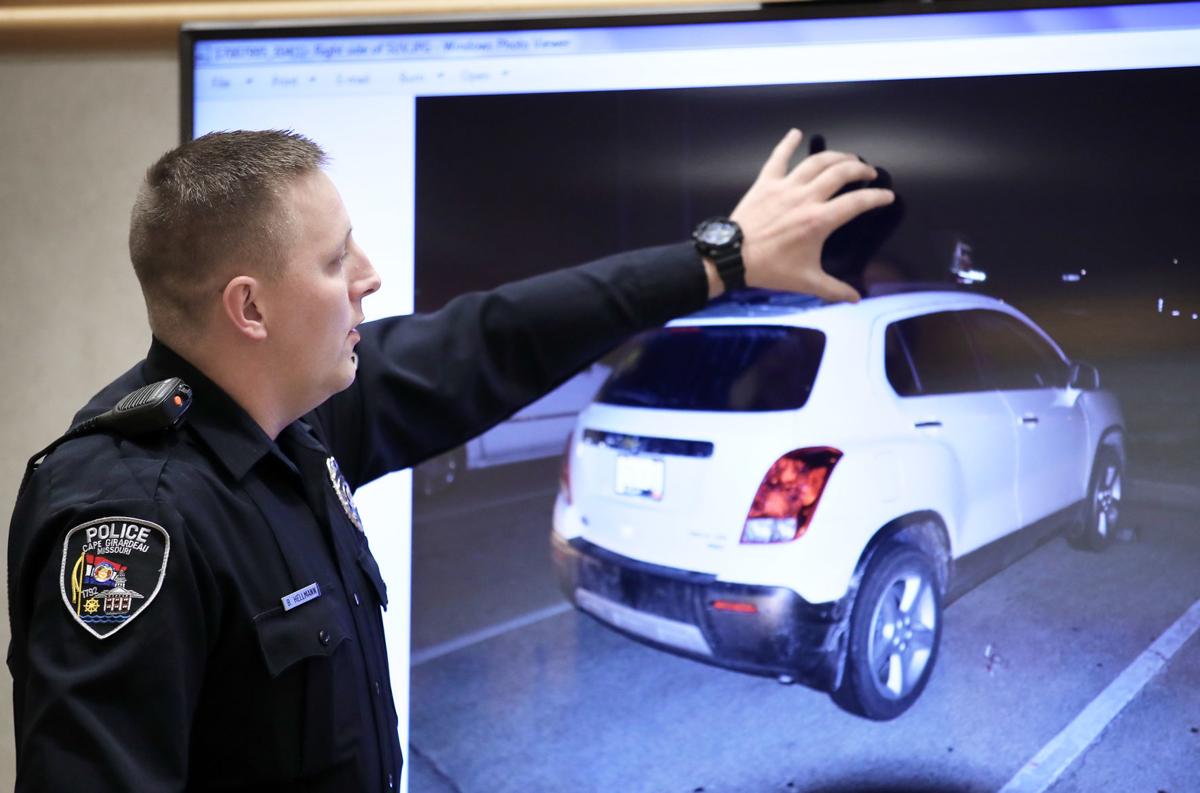 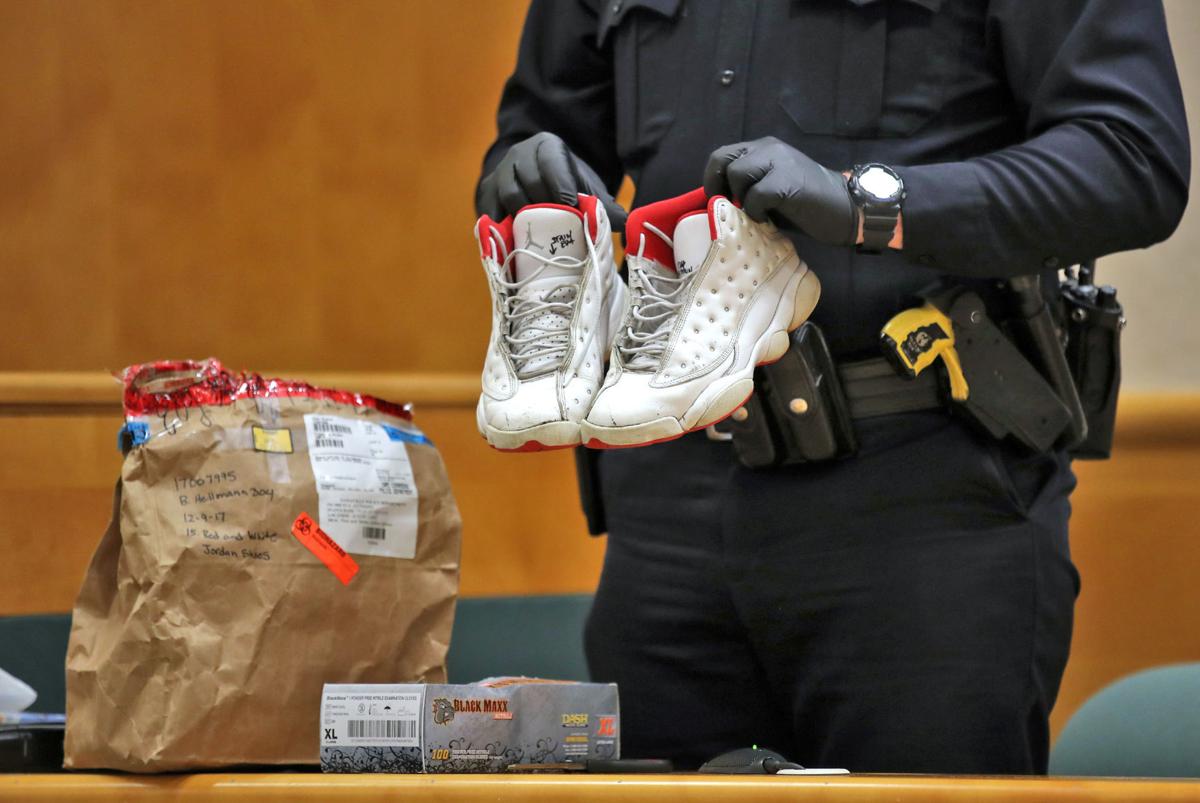 Cpl. Brett Hellmann of the Cape Girardeau Police Department pulls out the two shoes he secured as evidence during the initial arrest of Julian Collazo and Nicole Kazar in Missouri. 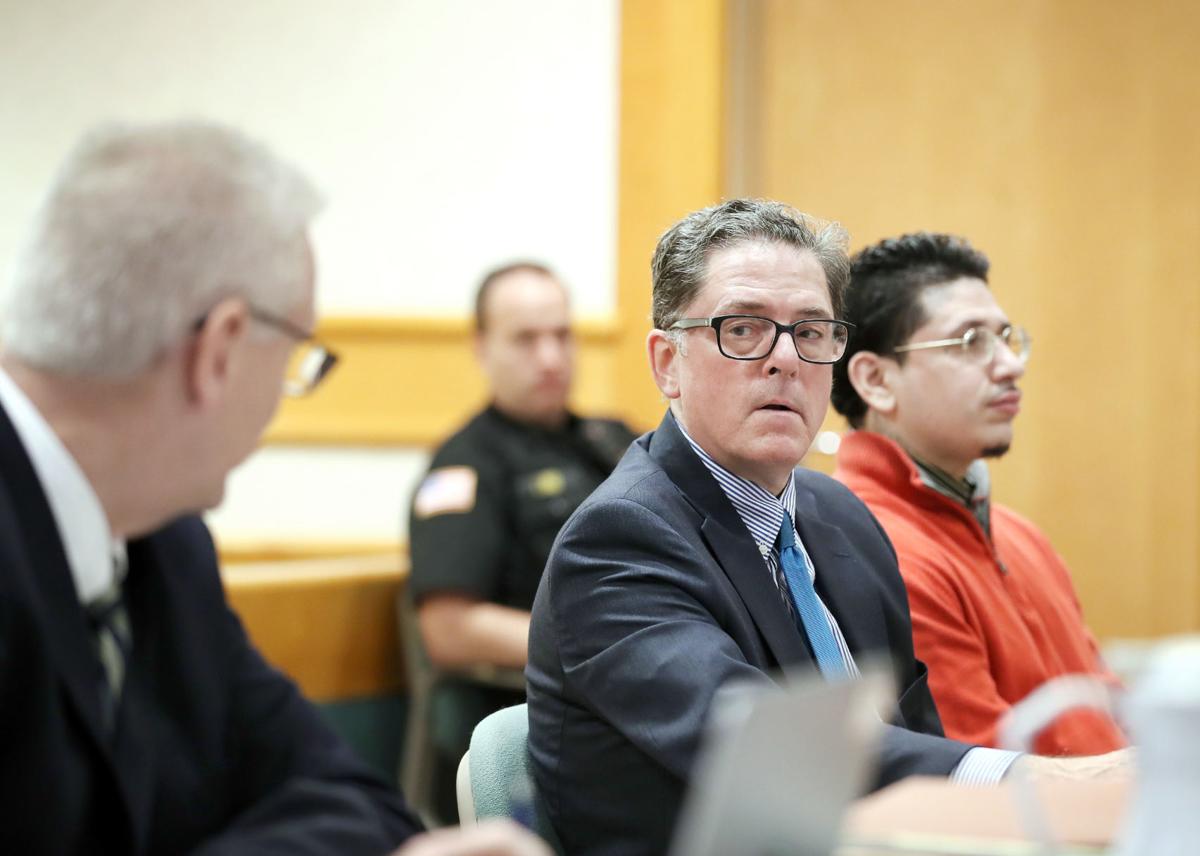 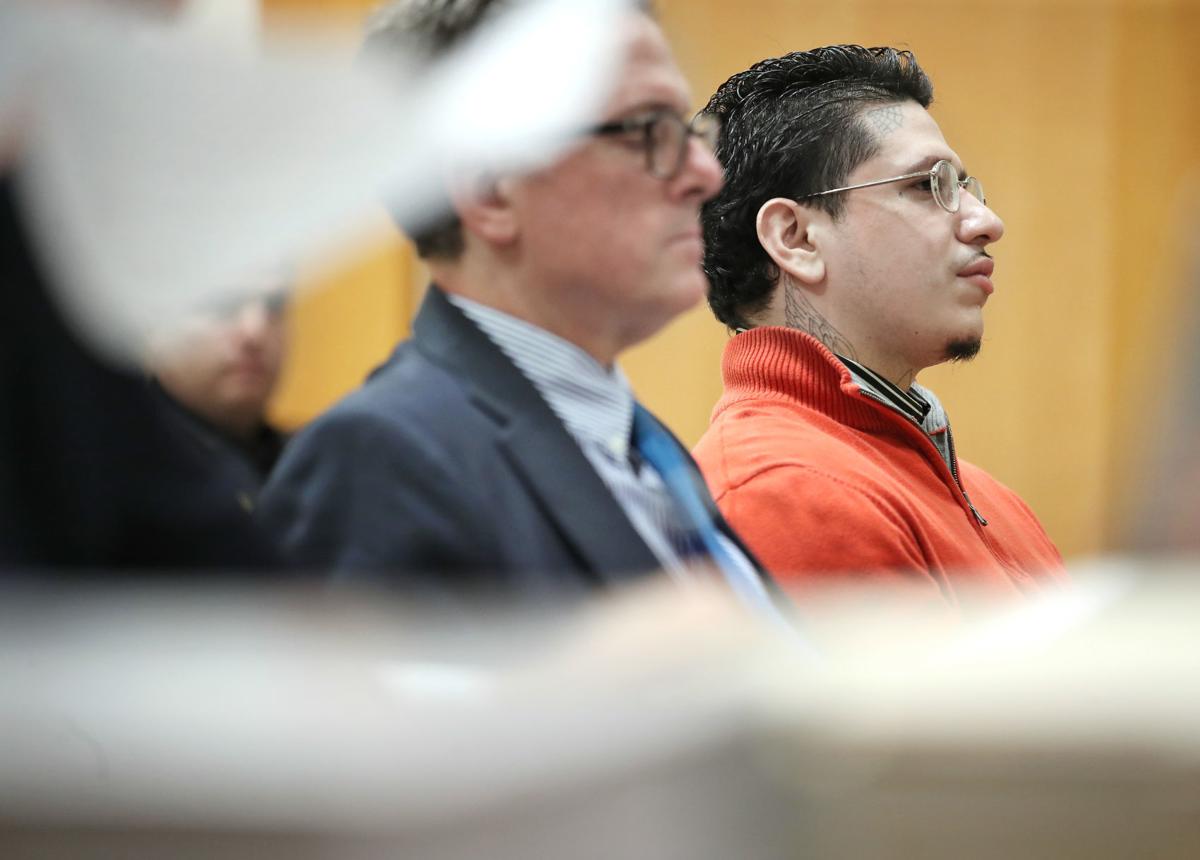 Julian Collazo appears in court Tuesday for the second day of his murder trial at the Rock County Courthouse in Janesville.

Prosecutors on Tuesday attacked the idea they have accused the wrong person in the Janesville stabbing death of Christine Scaccia-Lubeck, 43.

Julian D. Collazo, 22, is on trial on a charge of first-degree intentional homicide in the death, but the defense has suggested in court documents that a Collazo acquaintance, Nicole R. Kazar, 25, was the one who stabbed Scaccia-Lubeck 33 times at her Janesville home Dec. 8, 2017.

Evidence presented Tuesday indicates Kazar and Collazo were involved in crack cocaine and prostitution, and they were together for part of the night of the stabbing.

Police have characterized Collazo as a homeless man from Texas who had lived in Janesville a short while, and Collazo told police Kazar was working as a prostitute, according to testimony Tuesday.

A Beloit acquaintance of Kazar told the court that early on Dec. 9, 2017—hours after the murder—Kazar and Collazo smoked crack cocaine and drank Bud Light with him before they left town.

Kazar and Collazo were arrested the next night in Cape Girardeau, Missouri, with an SUV that belonged to Scaccia-Lubeck.

An inmate in the Cape Girardeau Police Department jail told police he and others talked to Collazo in the jail, and Collazo told them he stabbed and killed a woman in Janesville.

The inmate, Derek Renshaw, said Collazo yelled Kazar’s name from his jail cell for 30 minutes, asking where she was.

Kazar has been convicted of driving a vehicle without owner consent for driving Scaccia-Lubeck’s SUV after the stabbing.

The jury was shown a video from the Super 8 motel in Janesville that shows for at least part of the night when the stabbing occurred Kazar was at the motel.

Renshaw testified Collazo said he stabbed his Janesville victim multiple times in the abdomen while she was in the bathroom of her home and that she managed to get to the bedroom in an attempt to get a gun before she collapsed.

Collazo said he killed Scaccia-Lubeck to show Kazar that he was loyal to her, Renshaw testified.

Collazo told them Kazar had been prostituting herself, and he was upset that he had not been there to protect her, Renshaw said.

Defense attorney Jeffrey Jensen asked Renshaw if Collazo indicated he would do anything to show Kazar that he was loyal and if Kazar was upset that Collazo had gone to Scaccia-Lubeck’s house, and Renshaw agreed.

The jury also was told about the blood spatter found on Collazo’s white sneakers and a pair of tan pants found in the SUV.

Kazar told Cape Girardeau police Cpl. Brett Hellmann the blood was from cutting her finger when she was cutting material to make a filter for her crack cocaine pipe, Hellmann testified.

Hellman also testified Kazar told him Collazo had told her that he had killed the woman who owned the SUV.

One juror abruptly got up and asked for a recess during the testimony, when Tranchida was pointing to wounds in a photo of the victim’s heart. The juror said later the photos unexpectedly brought up a memory that caused him to nearly lose consciousness, but he said he could continue as an impartial juror.

Tranchida described wounds from a knife that cut through the sternum and some ribs, hitting the heart several times, collapsing the lungs and hitting a kidney, among other internal injuries.

Assistant District Attorney Scott Dirks wanted to ask Tranchida for an estimate of the time of death, but Jensen objected, saying that estimate was not in Tranchida’s death report and so bringing it up at trial would violate the rule that evidence must be disclosed in advance.

Judge Barbara McCrory sustained the objection. Dirks was able to ask the temperature of the body the morning after the stabbing. Tranchida said it was 68 degrees, the same as the air temperature in the house.

Janesville police Detective Thomas Bechen testified Collazo eventually admitted he had a sexual relationship with Scaccia-Lubeck and said she had paid him for sex.

Collazo told the detective Kazar didn’t know Scaccia-Lubeck and had not been at her house, Bechen testified.

Jensen asked Bechen if Collazo’s answers might have been intended to cover up for someone. Dirks objected, saying the question asked for speculation, and McCrory agreed.

Bechen showed the shoes he believed Kazar was wearing the night of the stabbing and said their tread pattern did not match the bloody footprint found at the murder scene.

An officer testified Monday the bloody footprint matches the tread of the shoes Collazo was wearing.

Jurors on Tuesday morning watched video from a liquor store showing Scaccia-Lubeck and Collazo as they bought beer the night she died.

A portion of a Bud Light carton was found in Scaccia-Lubeck’s SUV.

The prosecution is expected to rest its case late Wednesday morning. The defense witness list includes Kazar and a woman who was with Kazar in jail and says Kazar admitted she killed Scaccia-Lubeck, according to a defense document.

A Rock County Judge Barbara McCrory on Thursday afternoon declared a mistrial in the murder case against Julian Collazo.