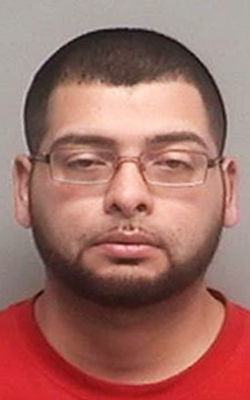 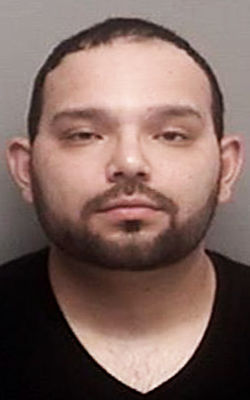 A federal agent held up a sandwich bag bulging with white powder in Walworth County Court on Monday.

It wasn’t cocaine, but it represented the approximately 14 ounces of cocaine that Christian Montano, of Sharon, sold to an informant and the 7-plus ounces he had in his possession when he was arrested in 2017, said Nathan Coffin of the U.S. Drug Enforcement Administration.

That weight was on one side of the scales of justice that Judge Phillip Koss considered as he sentenced Montano for two counts of delivery of cocaine and two counts of possession of cocaine.

On the positive side of the scales was the fact that Montano had never been convicted of a crime before, and he reportedly had led an exemplary life since his arrest—going to church and Alcoholics Anonymous meetings, working hard and lovingly attending to his wife and their two children, according to tearful family members and his employer, Tom Collins, who spoke on his behalf.

Also in Montano’s favor: the fact that Koss had let him go to Mexico to visit his parents while his case was pending, and he returned.

Montano’s sister, Sandra Torrez, told how his girls, ages 5 and 6, cried every night when their father was in jail for 78 days, and she wondered how the girls would handle their father’s absence Christmas morning.

Montano’s wife, Ariana Cruz, who recently had a miscarriage, told Koss she needed him at home to help her grieve and support the family while she is not at her dental-assistant job.

Montano had been charged with selling nine times to the informant, a relative of his wife, but seven of those charges were dismissed in a plea agreement. Also dismissed was a bail jumping charge for failing to inform the court when he moved in with his sister and drank half a beer.

“He was in the big leagues. It’s more than likely this was going on for a long time,” Johnson said.

Johnson agreed Montano’s family will suffer from his absence, but she said he should have considered the families of the addicts from whom he profited.

Johnson recommended seven years in prison plus 10 years of extended supervision, a far harsher penalty than the probation sentence recommended by the Department of Corrections and the defense.

Montano, looking healthier than the man in his booking photo, apologized and said his AA attendance had helped him stay sober for 19 months.

Koss acknowledged Montano’s positives but said probation would downgrade the seriousness of the crime.

What sentence would a judge give to the next person who is caught selling large amounts? Koss asked.

Defense attorney David Saldana said Montano began selling cocaine to support his habit and his family when he lost his job.

Marveling at the large amount of cocaine, Koss said he did not buy the argument that the drug sales were purely addiction-driven.

Koss sentenced Montano to four years in prison plus six years of extended supervision. Montano also must pay a $5,000 fine plus court costs, plus the $18,850 the government spent to buy the cocaine.

Koss made Montano eligible for prison rehabilitation programs that could make him eligible for early release.

Koss said during sentencing that it would not have been easy for Montano to find someone who could supply him with such large amounts of cocaine.

Cristian F. Rodriguez, 28, now of 3505 Randolph Road, Janesville, was the supplier. Koss sentenced Rodriguez in June on a charge of party to delivery of 40 or more grams of cocaine to eight years of probation, to include a year in jail with work-release, according to court records.