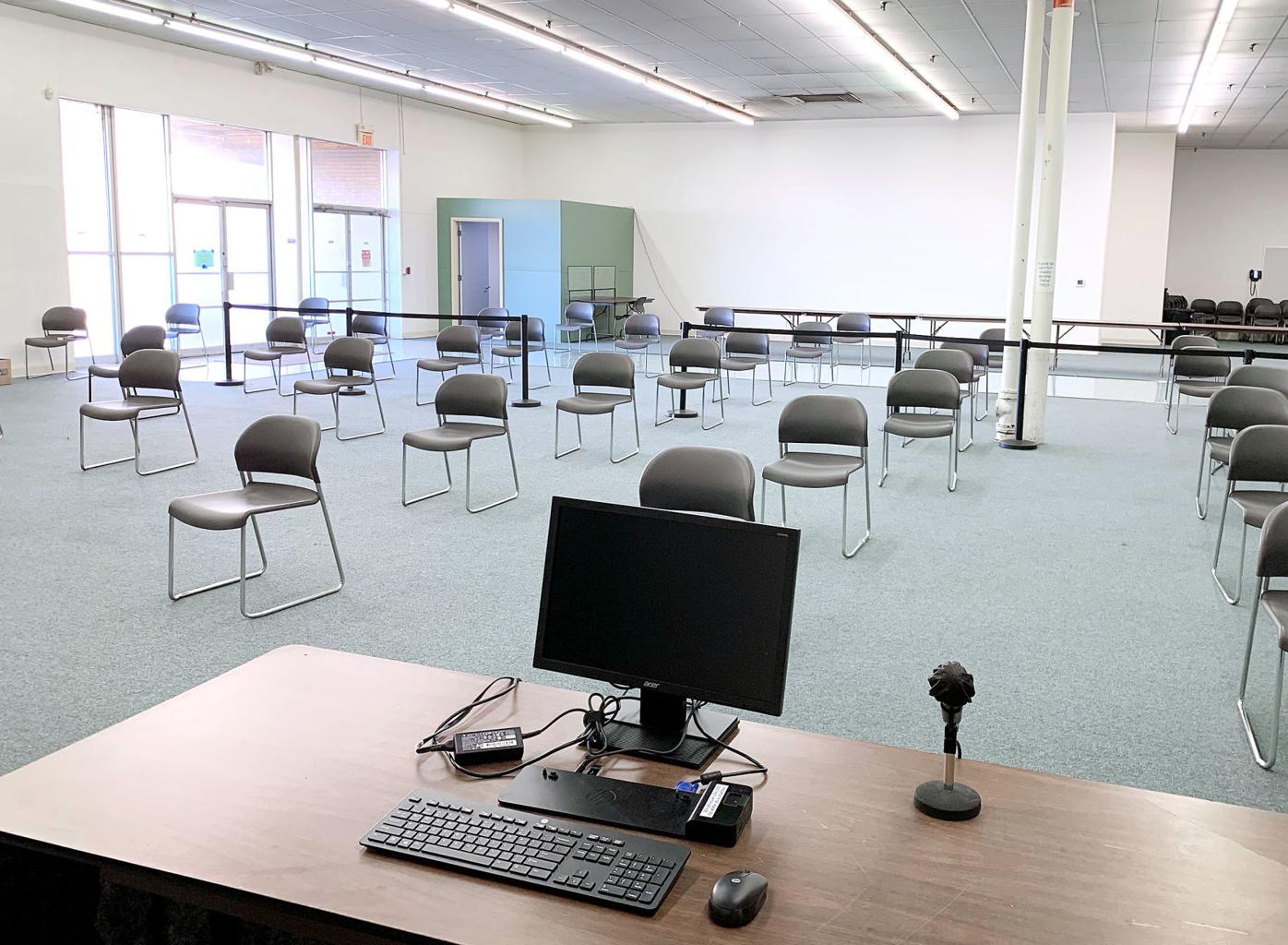 This is the room Rock County officials set up at the Rock County Job Center in Janesville so jury trials could be held while adhering to social distancing recommendations. 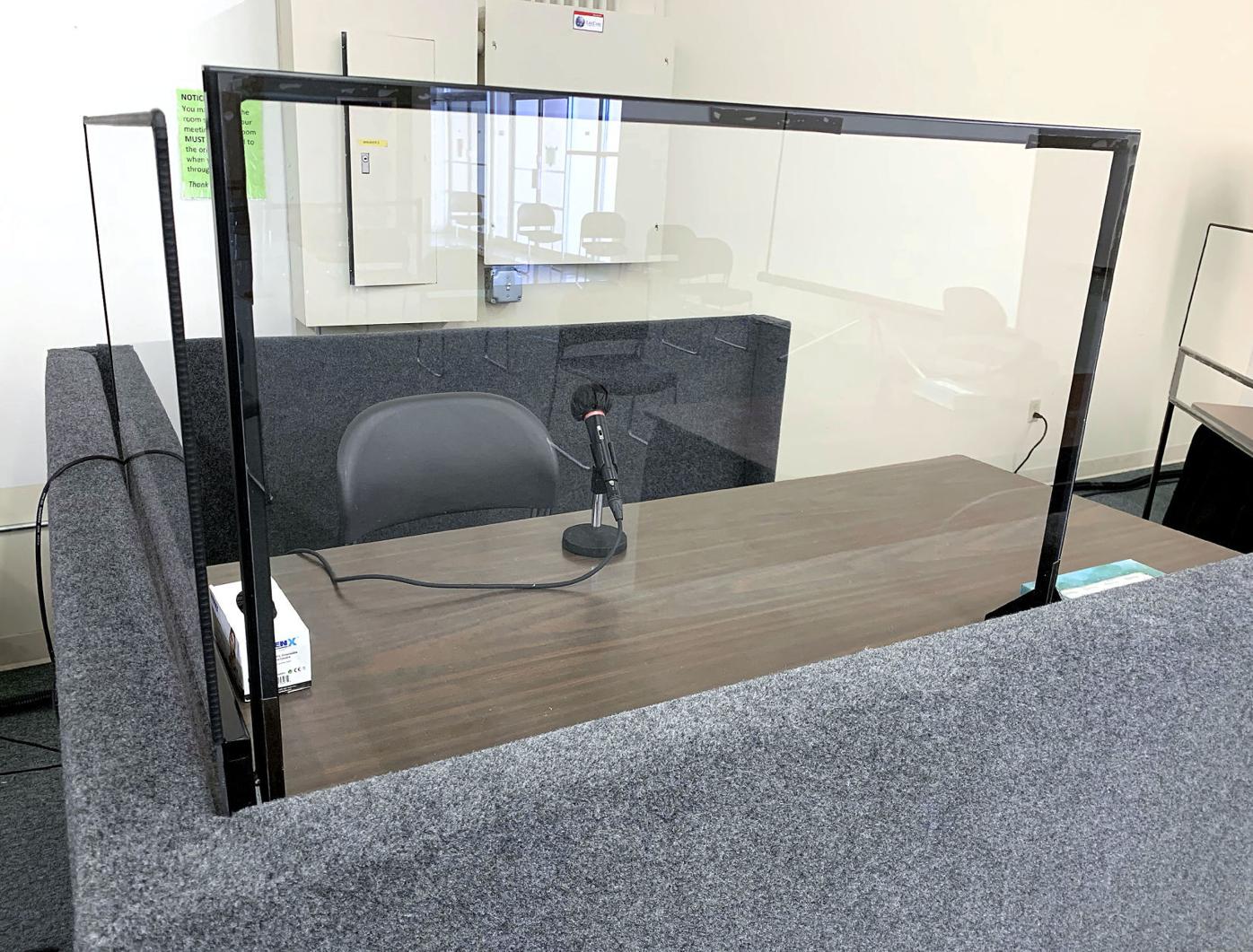 Witnesses will be able to sit here at the Rock County Job Center during jury trials. The front barrier was removed Monday, however, because people had trouble seeing each other. 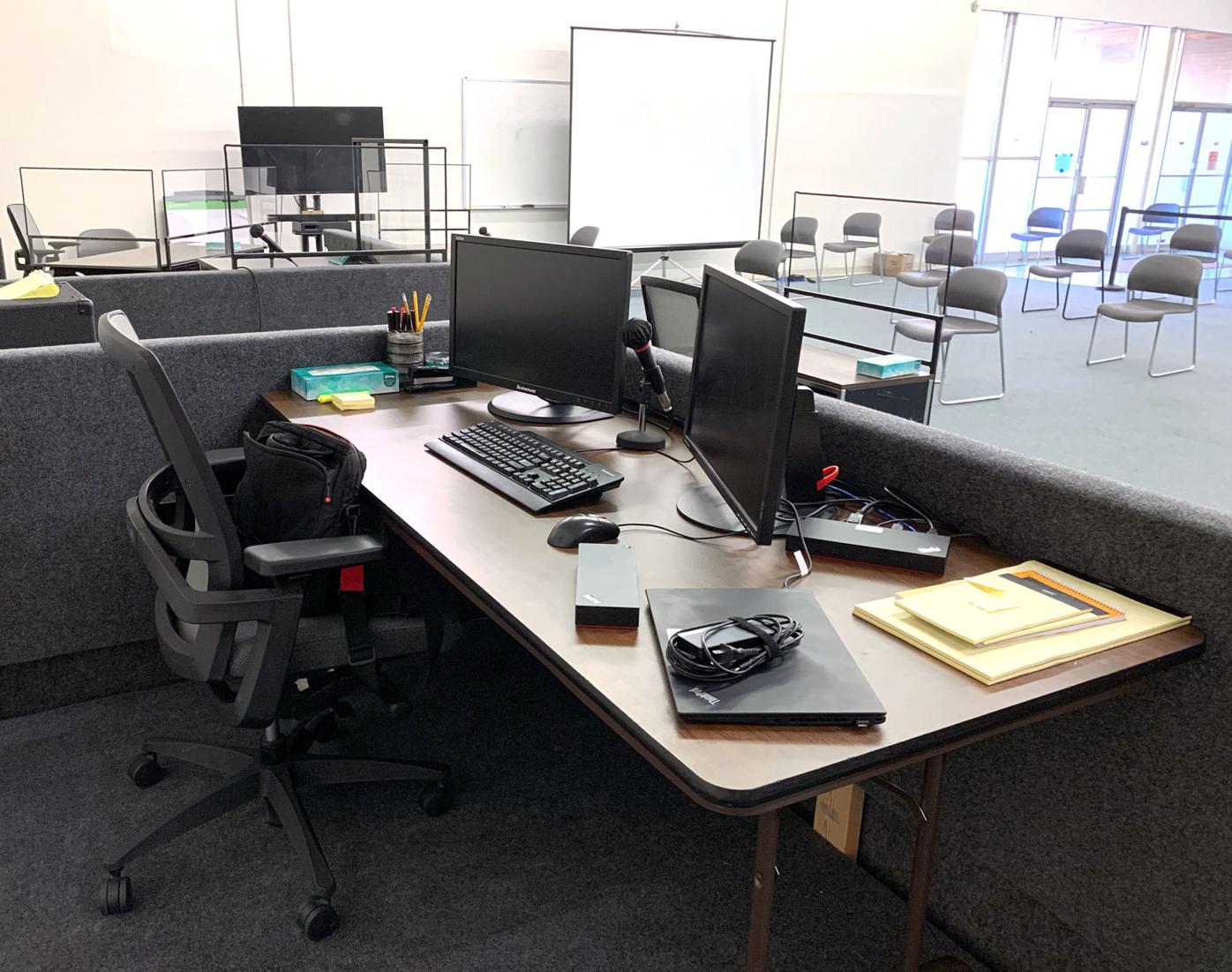 The bench where Rock County judges can oversee jury trial proceedings at their unofficial Courtroom K, which is at the Rock County Job Center. 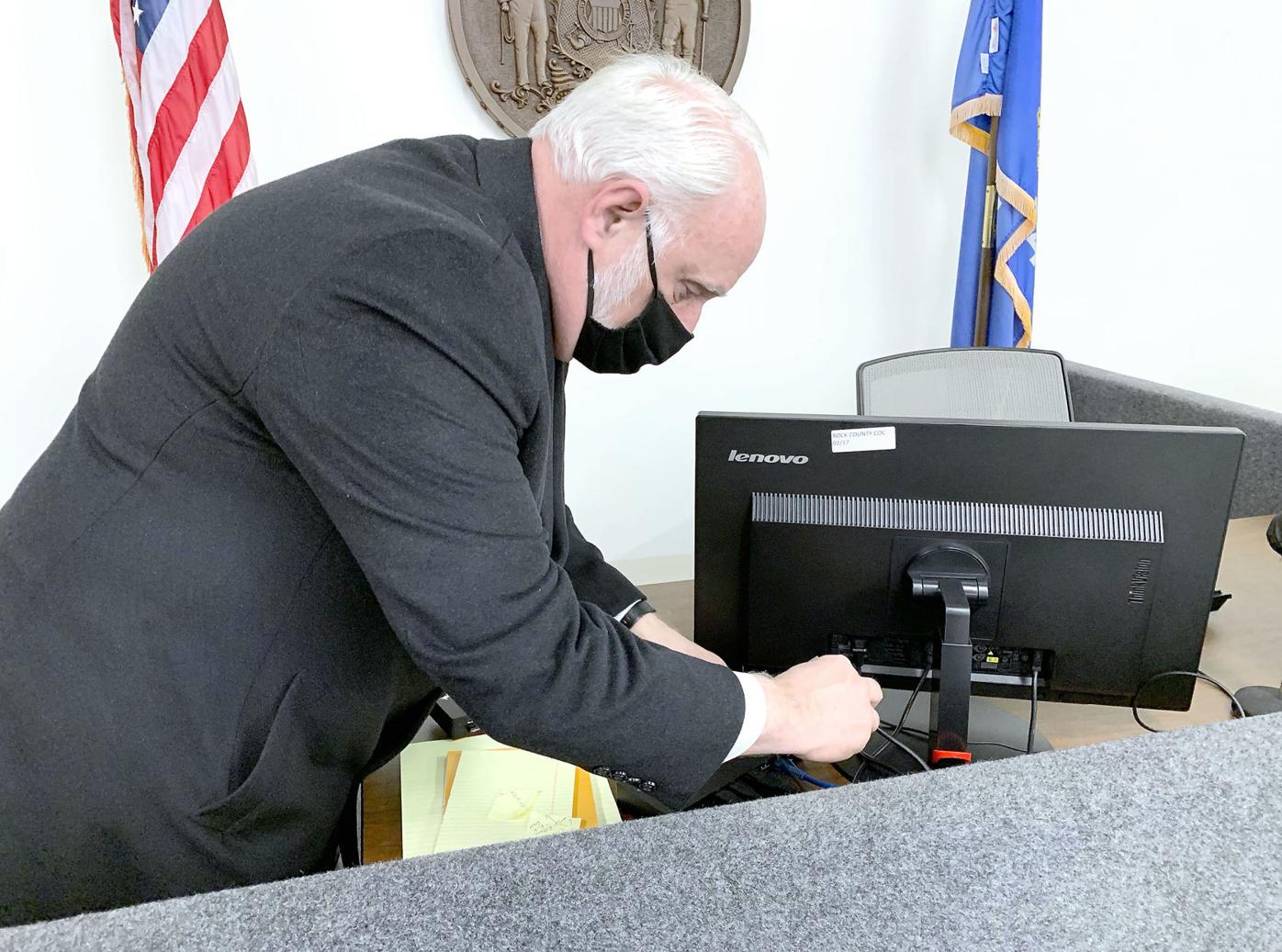 Rock County Judge John Wood works Thursday to prepare the computer at the Rock County Job Center that Judge Karl Hanson is using for the county’s first jury trial in more than a year. 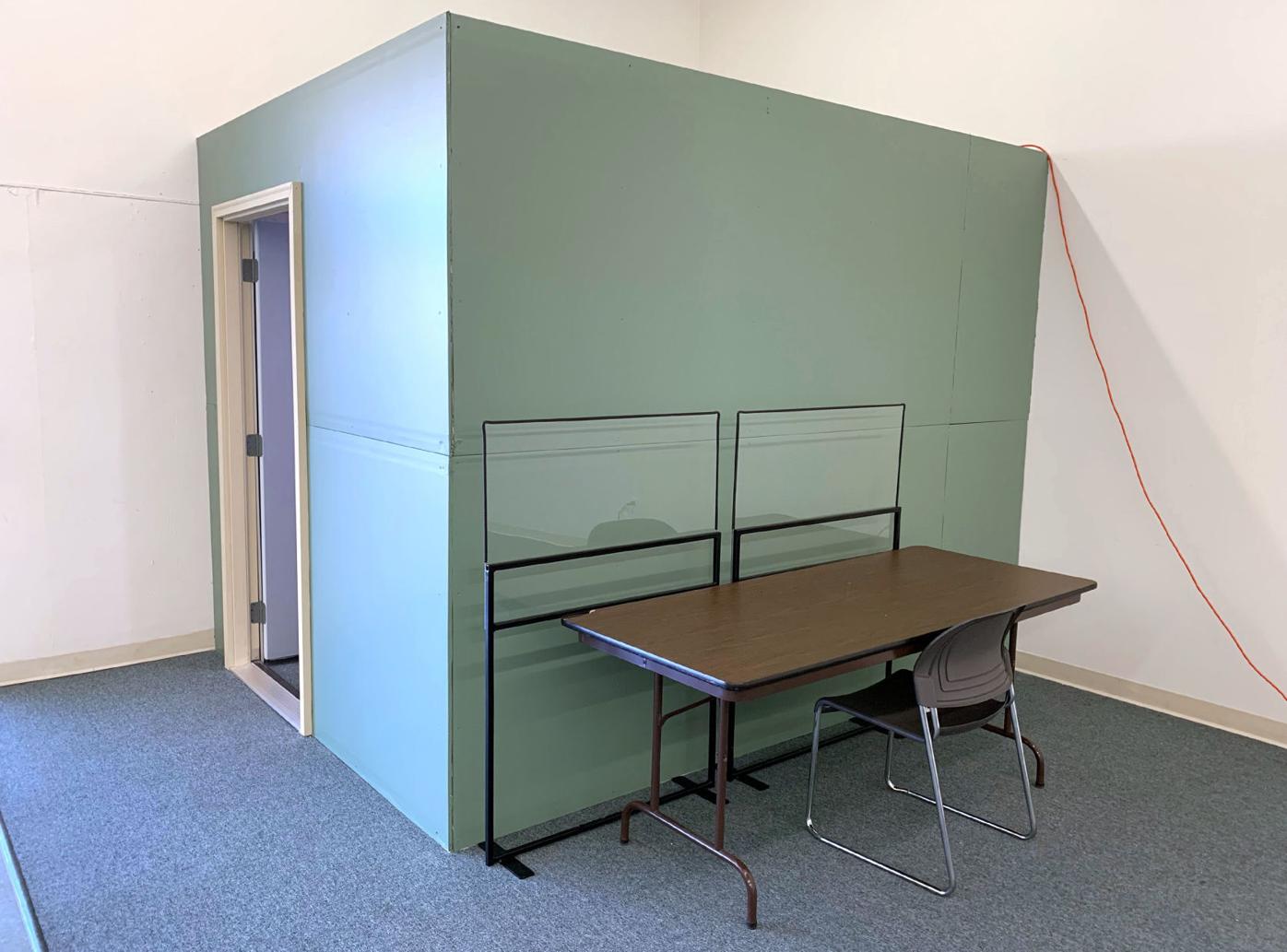 A new area built at the Rock County Job Center where in-custody defendants can wait during breaks of their jury trials.

This is the room Rock County officials set up at the Rock County Job Center in Janesville so jury trials could be held while adhering to social distancing recommendations.

A new area built at the Rock County Job Center where in-custody defendants can wait during breaks of their jury trials.

On the first day of Rock County’s first jury trial in more than a year, Judge Karl Hanson helped set bags under the chairs for 14 jurors spread 6 feet apart at the Rock County Job Center.

In a sign of the pandemic times, the bags contained hand sanitizer, masks, tissues, gloves and notebooks.

“I’m going to ask for your patience today because we’re going to take this process nice and slowly,” Hanson told the room of prospective jurors before 12 of them plus two alternates were picked Monday.

“We want to make sure that we make this as comfortable and efficient for you—and as safe for you—as possible,” he continued. “You’ll note that we’ve taken as many health precautions as we possibly could.”

When Hanson introduced himself and the lawyers trying the case, he let them remove their masks so everyone could see their faces—but he said they would take “a nice, deep breath” before doing so.

Jury trials are relatively rare in Rock County, but the pandemic made them even more uncommon. It had been a little more than a year since the county last held one.

The coronavirus brought the Rock County Court system to what one local judge called “almost a screeching halt.” The county held most—if not all, at some points—of its hearings virtually over Zoom, and it finished 31% fewer criminal cases than the year before.

But trials are far too complicated to hold over Zoom. So cases needing to go before a jury have had to wait—until Monday.

The primary logistical problem on display Monday afternoon was sound. The room at the job center on Janesville’s south side was big and open to accommodate social distancing, but the parties had to spend time throughout the day fixing their microphones.

Judge John Wood, who has been the lead judge overseeing plans to hold a trial at the job center, said Monday the sound was the “weakest link” but that he was happy with how proceedings had been going otherwise.

Rock County’s first trial since the beginning of March 2020 is for Daniel Robinson of Beloit. Hanson is the judge for this case, Gerald Urbik is the prosecutor, and Faun Moses and Kevin Smith are the public defenders.

Wood said last week that having a case with a defendant in custody and with a speedy trial demand was a priority to finish as soon as possible.

“I think we are all—and when I say all, I’m talking about the judges, the prosecutors, the defense bar—I think we’re all anxious to get back to some degree of normal operations. Let’s just put it that way,” he said.

Robinson’s trial is expected to be held entirely at the job center in what judges have called “Courtroom K.” But Wood has said he hopes to eventually use the job center only for jury selection and then convening trials the courthouse.

Jury selection involves bringing in dozens of potential jurors before the final set is picked. That made social distancing practically impossible at the courthouse.

At the job center, chairs were spaced to accommodate 6 feet of space around them.

Officials built a makeshift bench from which the judge can preside, as well as a witness stand with plexiglass and a small room for in-custody defendants to wait during breaks.

The plexiglass was another logistical problem on display Monday because the outline of the barriers blocked some parties from being able to see each other. So officials removed some of the barriers.

Masks were required, but compliance appeared to be as consistent as in other public places, such as in the grocery store. Everyone had masks, but some at times left their noses uncovered, others pulled down masks to talk, and others took them down to eat or drink.

Hanson, after asking if she was OK with it, also had a woman take off her mask during her testimony.

Wood said the plan to start holding jury trials was related to the county’s phased reopening plan. The judges thought they would be able to hold trials in the fall, but the virus spread within Rock County worsened.

“We’re constantly reviewing the county dashboard to see where things are,” he said. “That’s what is driving our determination about whether or not we believe we can safely bring in jurors, the parties, their attorneys, the court personnel and the public—and keep everybody safe.”

The next trial in Rock County could happen as soon as next week.