At bottom right, Joshua A. Kaster, 29, appears in Rock County Court on Wednesday afternoon. Kaster was sentenced to four years of probation and one year of conditional jail time for his actions Nov. 26, 2020, when he set fire to a home in a standoff with police after a domestic violence incident. 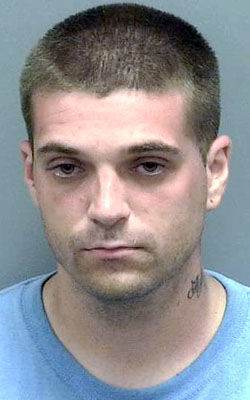 What started out as a peaceful Thanksgiving dinner quickly took a violent turn after a Janesville man became intoxicated and battered a woman before setting fire to a home on Nov. 26, 2020.

Joshua A. Kaster, 29, was sentenced Wednesday in Rock County Court to four years of probation and one year of conditional jail time by Judge John Wood.

Kaster was arrested after a standoff with police at a home in the 3600 block of Birdsong Lane in Janesville. Kaster had battered a woman and then attempted to steal a truck that was in the home’s driveway before returning to the home and arming himself with a knife, court records show.

He was seen by officers breaking windows and throwing household items prior to police making contact with him. During a confrontation with Janesville police, Kaster held a knife to his throat and told officers they would have to kill him. During the incident, he set fire to the home that caused $75,000 in damages.

On Wednesday, Kaster apologized to the victims in the case, saying he wanted to make a change for the better.

“I learned my lesson,” he said. “This is not the place I want to be. I want to be a productive member of society, get help for substance abuse and move on with my life.”

The home damaged in the fire is still not fully repaired, Wood said during Wednesday’s hearing.

A restitution hearing is scheduled for Friday,Aug. 27.