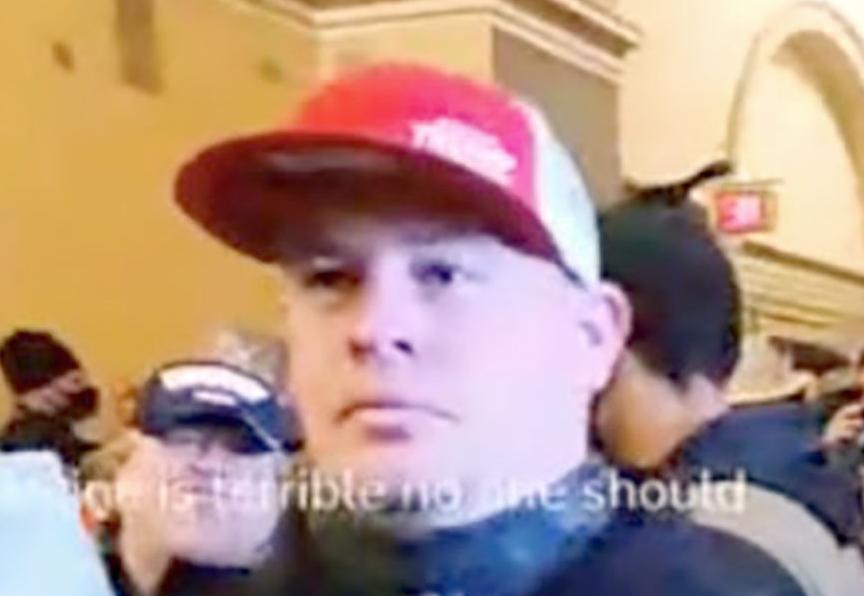 This image was included in charging documents from the U.S. District Court in Washington, D.C., accusing Janesville resident Michael Fitzgerald of participating in the Jan. 6 unrest at the U.S. Capitol. Prosecutors say this is Fitzgerald after entering the U.S. Capitol that day. 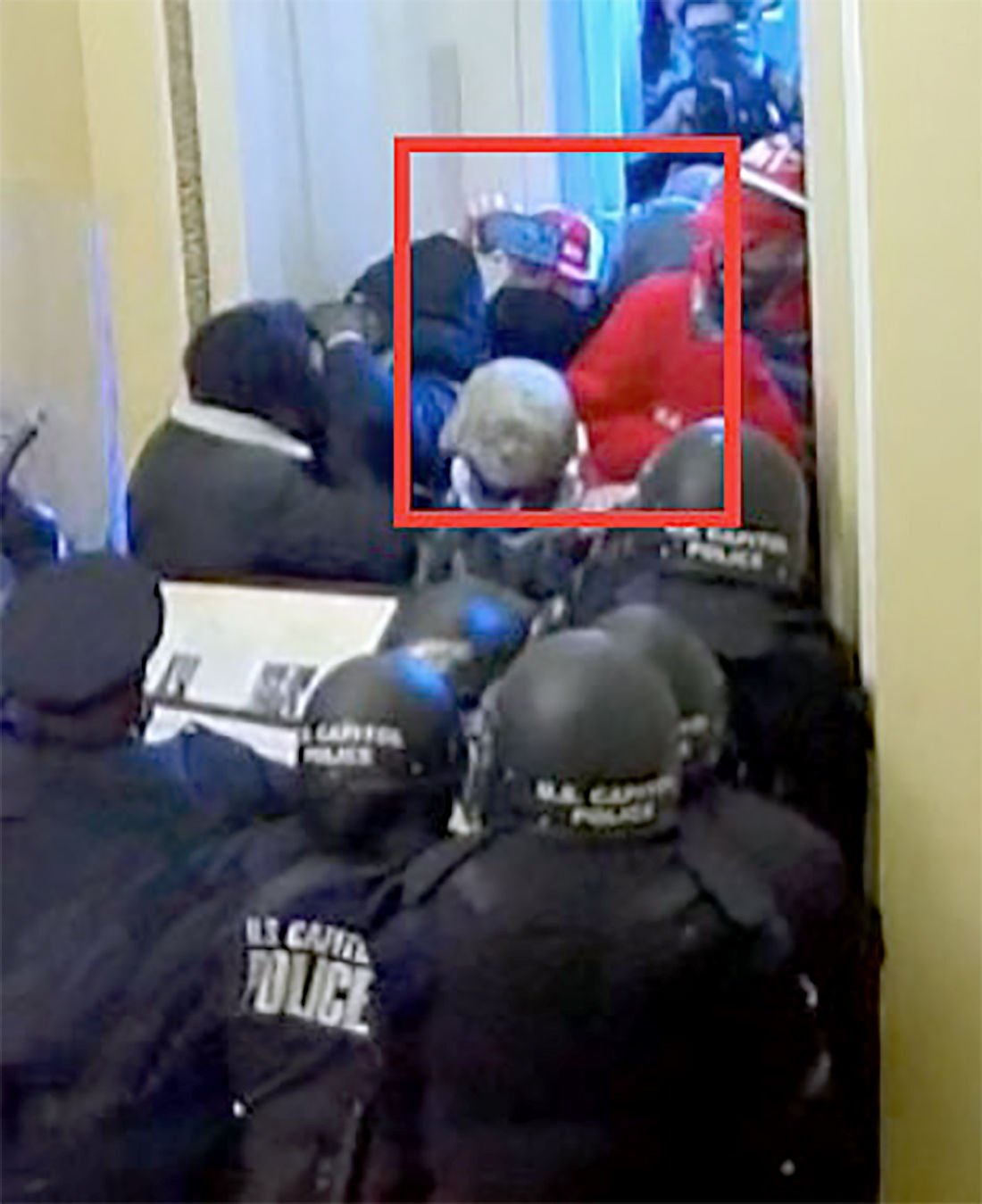 This image was included in charging documents from the U.S. District Court in Washington, D.C., accusing Janesville resident Michael Fitzgerald of participating in the Jan. 6 unrest at the U.S. Capitol. Prosecutors say Fitzgerald is the man in the red hat holding a cellphone and trying to push past a line of Capitol Police officers. 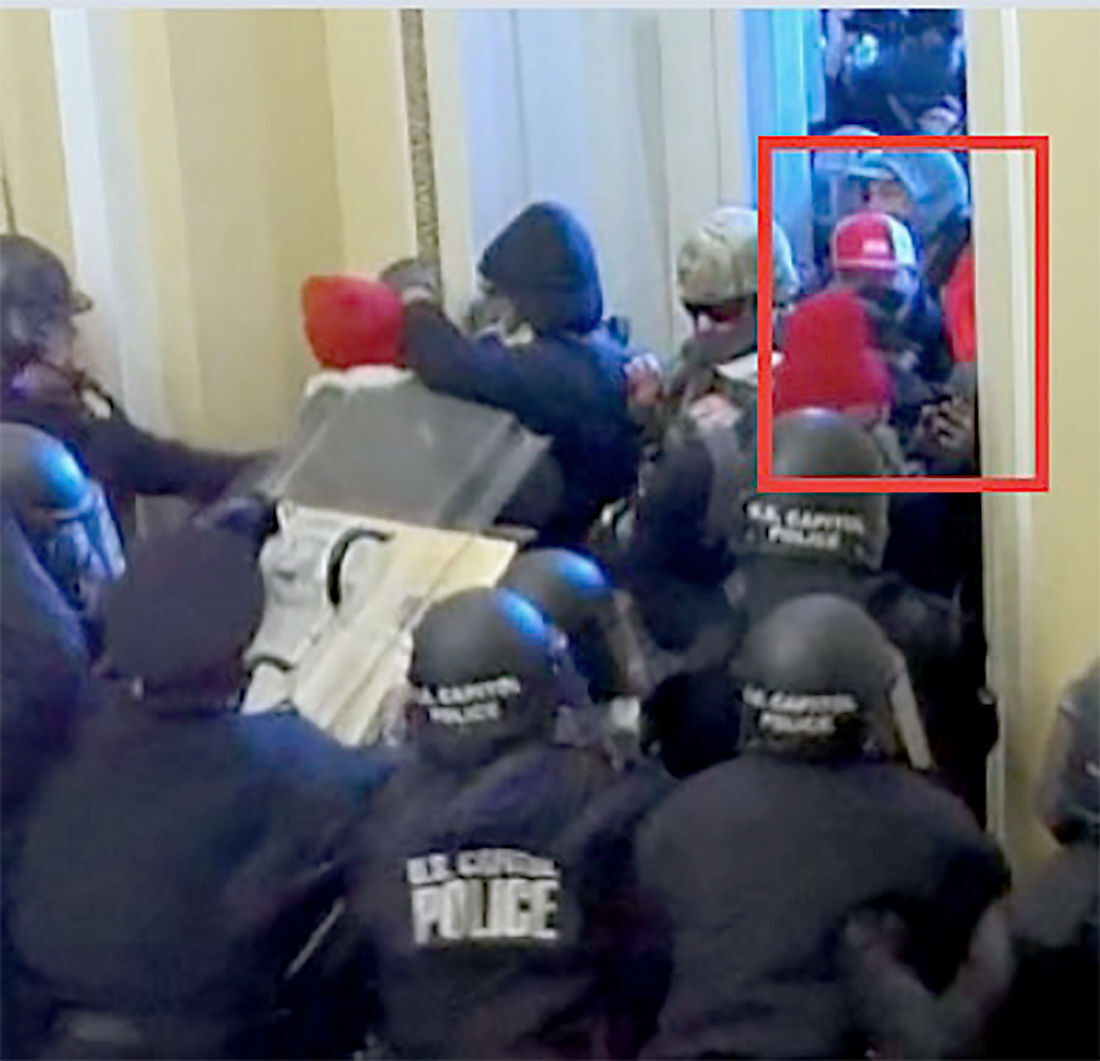 This image was included in charging documents from the U.S. District Court in Washington, D.C., accusing Janesville resident Michael Fitzgerald of participating in the Jan. 6 unrest at the U.S. Capitol.

A Janesville man has been charged with being part of the deadly insurrection at the U.S. Capitol on Jan. 6 that led to a police officer’s death as supporters of former President Donald Trump stormed the building.

The complaint includes photos that authorities say show Fitzgerald near the front of the lines that burst into the Capitol against the efforts of police.

After Jan. 6, the FBI shared photos of people who had been inside the Capitol, asking for help in identifying them.

Someone who knew Fitzgerald “through employment” reached out Jan. 8 and shared his address and phone number, according to the complaint filed in the U.S. District Court for the District of Columbia.

The next day, agents showed up in Janesville and met with Fitzgerald after he contacted them, confirming he was in one of the photos.

Fitzgerald is seen entering the Capitol at about 2:47 p.m. local time on the Senate side of the building, the complaint states.

The complaint does not say whether Fitzgerald himself assaulted any officers. Photos show him near the front of the line, “participating in the push against law enforcement officers.”

In total, it appeared that he was in the Capitol for about 40 minutes before he left through a window.

Several police officers were also injured during the raid on the Capitol, which came as elected officials were attempting to formalize Joe Biden’s Electoral College victory.

Before, during and after Jan. 6, Trump and other Republicans shared debunked theories about the election results, and courts roundly rejected the Trump campaign’s efforts to overturn them.

In total, five people died in connection to the events at the Capitol on Jan. 6.

Attempts to reach Fitzgerald were not immediately successful Tuesday.

Janesville police on Tuesday confirmed that the Fitzgerald charged in federal court is the same Fitzgerald who started the local Veterans First Foundation, a group that helps struggling veterans.

A Gazette story from 2019 about the group said Fitzgerald was in the U.S. Marines, with whom he served as a communications specialist and completed an overseas deployment.

“This is a big veterans town,” Fitzgerald said of Janesville in 2019. “People are very patriotic.”

Court documents show at a status conference held Tuesday the parties agreed that Fitzgerald would “surrender” at a Zoom hearing at 2:30 p.m. Thursday. If he requests a preliminary or identity hearing, it is possible the court appearance will happen later.