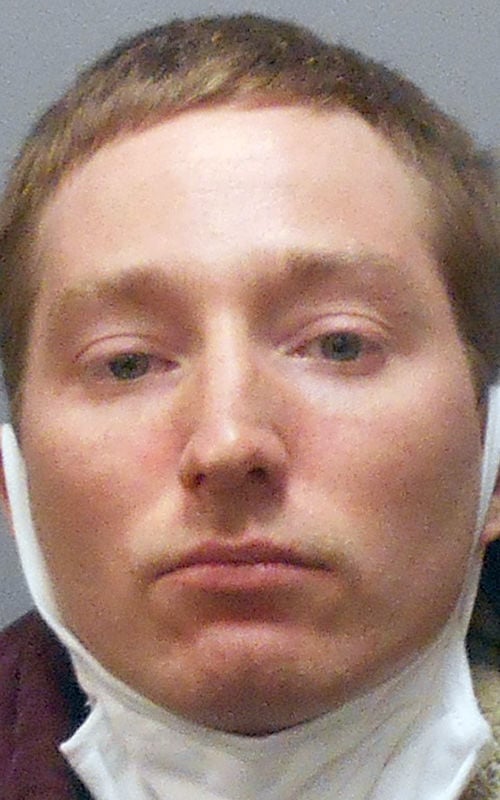 A Janesville man charged with arson and possessing Molotov cocktails had previously pulled a gun on the man whose home he tried to ignite last month, and he also threatened to send police officers “to the morgue,” according to a criminal complaint filed in Rock County Court.

The fires that officials responded to on the morning of Oct. 26 on Ruger Avenue “extensively damaged” the east side of a porch, and another fire damaged two recycling bins, the complaint states.

However, the dispute between Logue and the house’s resident reached other heights before the arson, according to the complaint.

The resident told police that Logue got into a physical fight with him, slashed his tires and pulled a revolver on him—acts that prompted the resident to quit his job, the complaint states.

On the night before the fires, prosecutors say Logue texted the resident:

“you have 120 hours and don’t bother running and hiding cause I will leave you nowhere to go.”

The day after the fires, prosecutors say Logue sent this text:

“you tell them it was me. Send them to my house,” according to the complaint. “You tell … I’ll be back sometime tomorrow to finish what I started and if you do call the cops, tell them to bring swat cause I’m locked and loaded and the first uniform I see is going to the morgue.”

Police responded to Logue’s residence, saw him on the street and arrested him, the complaint states. He had a loaded handgun with him in a fanny pack, as well as several bullets and a knife.

Logue declined to say more beyond saying that the resident owed him money, according to the complaint.

A search warrant of his house yielded Molotov cocktails consistent with what was found at the fires and an SKS military rifle with a bayonet, the complaint states.

A court commissioner Oct. 30 ordered a $1,000 cash bond for Logue, court records show. He is not allowed to contact the victim as a condition of his bond.

He is scheduled to appear for a preliminary hearing at 9 a.m. Monday.

Janesville police arrested a man who they say committed arson and threatened to “take out the first uniform that showed up at his house and send them to the morgue,” according to a news release shared Tuesday.