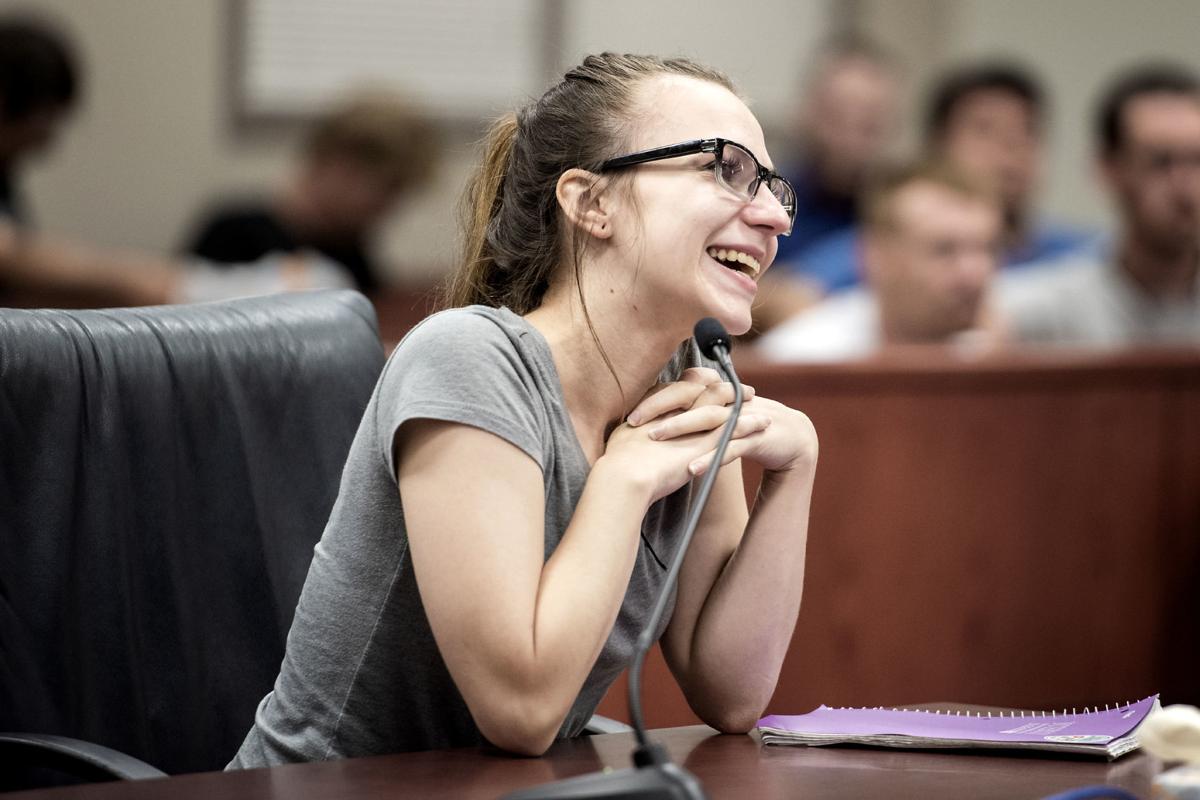 Hailey Beles smiles as she recounts the lessons and strategies she learned in drug court during her graduation from the program Thursday at the Walworth County Judicial Center in Elkhorn. 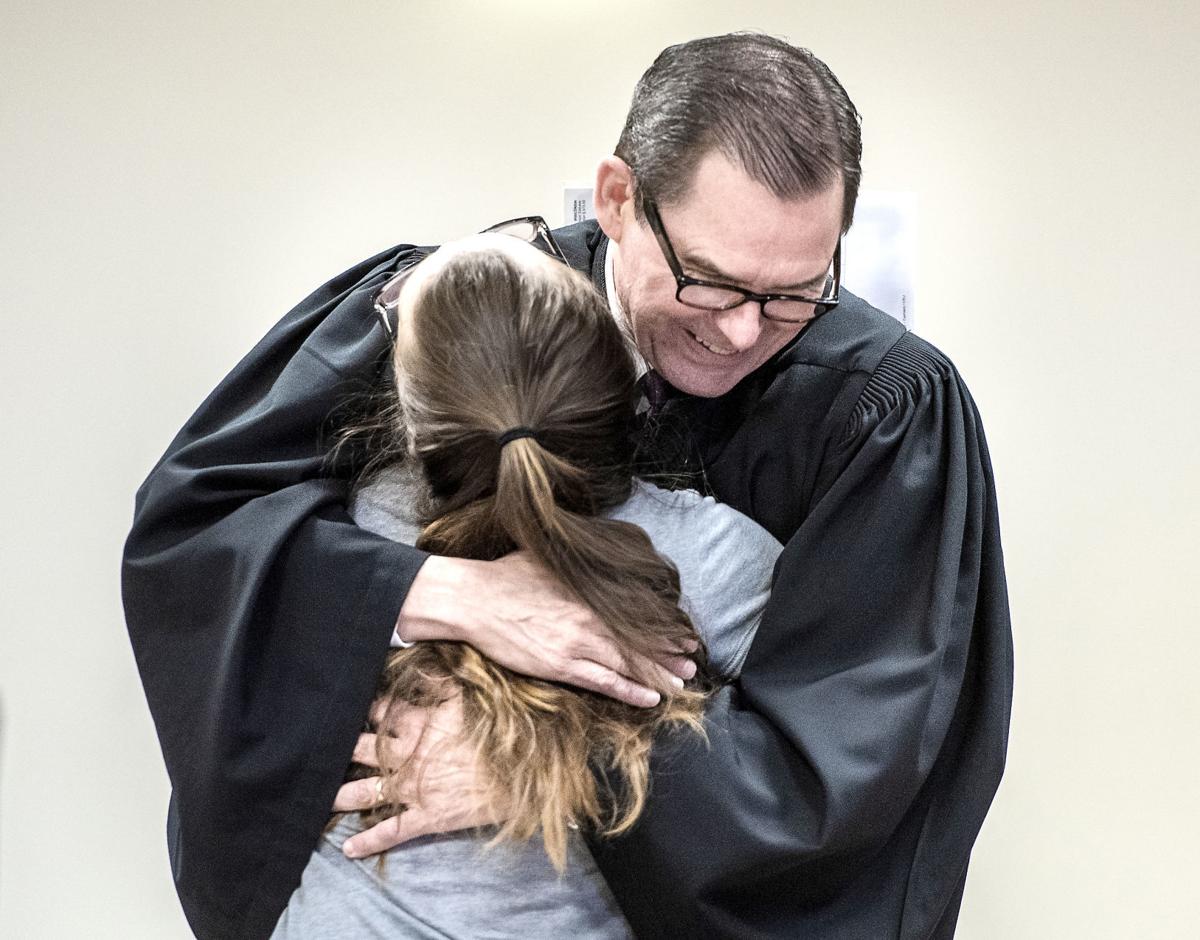 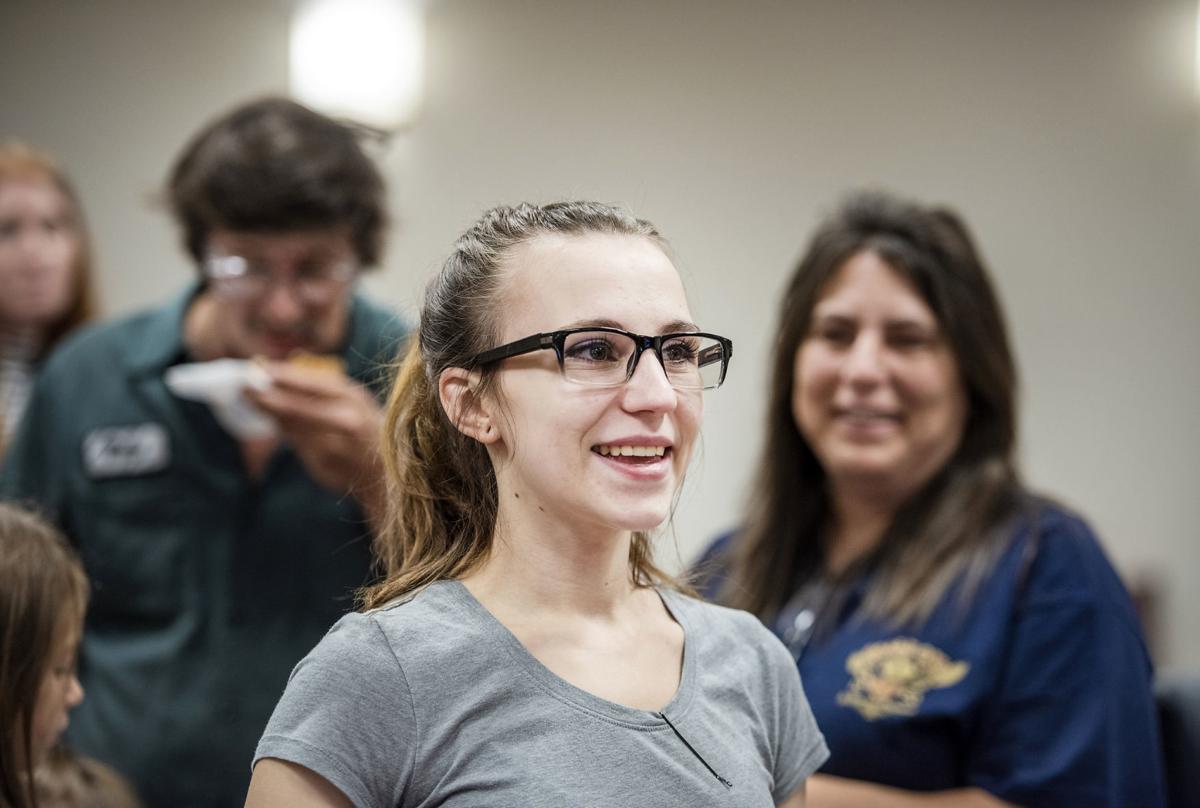 Hailey Beles stands during her graduation from drug court Thursday at the Walworth County Judicial Center in Elkhorn. 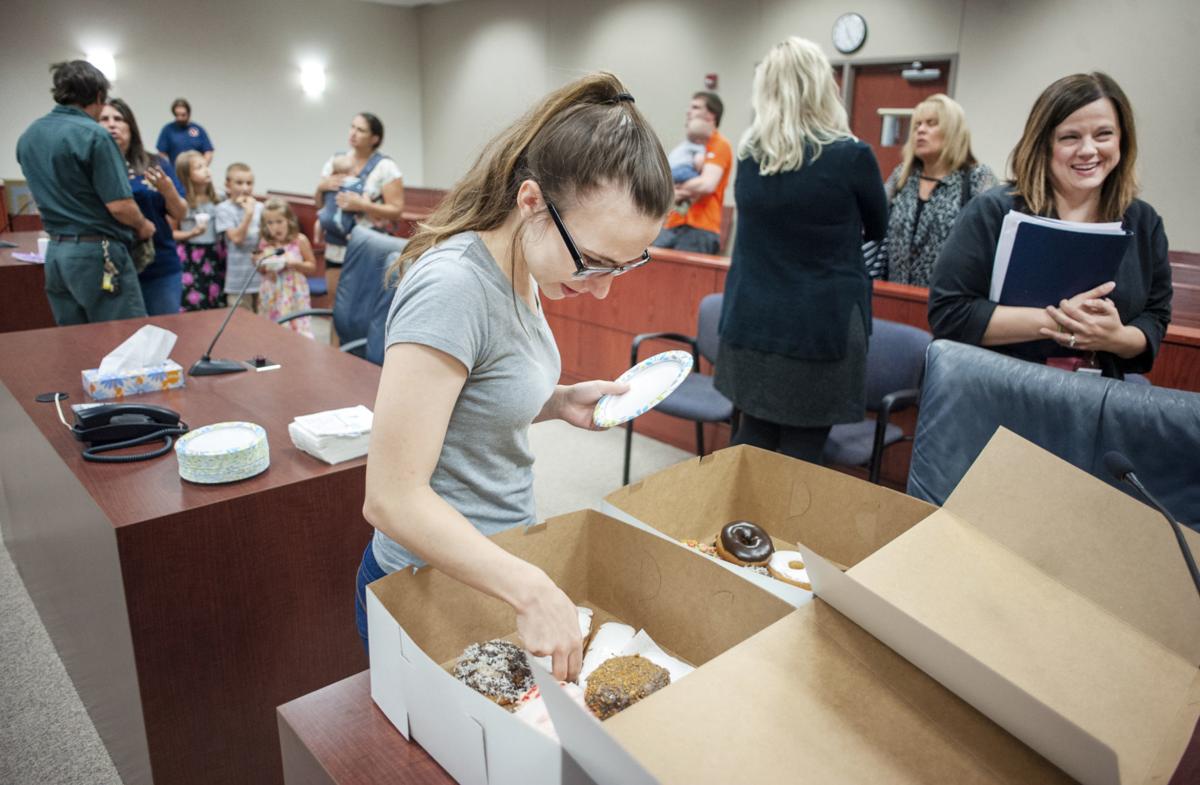 Hailey Beles selects a doughnut after graduating from drug court Thursday at the Walworth County Judicial Center in Elkhorn.

Hailey Beles smiles as she recounts the lessons and strategies she learned in drug court during her graduation from the program Thursday at the Walworth County Judicial Center in Elkhorn.

Hailey Beles selects a doughnut after graduating from drug court Thursday at the Walworth County Judicial Center in Elkhorn.

The last time Walworth County Judge David Reddy oversaw a drug court hearing more than a year ago, Hailey Beles made him a promise.

Having faced several rounds of punishment, Hailey’s future in the drug court program wasn’t clear. She was being placed on an alternative-to-termination agreement—close to a last straw.

But she gave the judge her word.

On Thursday, for the first time since last summer, Reddy was back running drug court, filling in for another judge on vacation.

In return for keeping her promise, Hailey graduated from drug court Thursday. She leaves with her criminal charge dismissed.

This is Hailey M. Beles' dilemma: Her difficult childhood and the drug addiction she is trying to recover from might have robbed her of an essential tool in that very recovery.

Hailey made her promise at the end of a Gazette profile on her. The story chronicled how some of the 19-year-old’s physical and emotional scars influenced her often-criticized attitude and her recovery from heroin addiction.

Reddy yelled at Hailey at times, and other times he sent her to jail. But he had a different message for Hailey on Thursday.

“I’ve been doing this for over eight years, and I don’t think I was as hard on anybody as I was on you,” he said.

“You did give me that kick in the ass I needed,” Hailey responded.

“Yeah, you did,” Hailey said, laughing. “So, thank you for that. As much as it sucked, and I’m sorry for how I was. Thank you. You did help me.”

Reddy said all credit goes to Hailey. She had to complete therapy and community service. She had to pass drug tests and, at times, comply with GPS electronic monitoring.

She’s now 20. When she started in the program in January 2018, she had turned 19 only a few months earlier.

As of last year, she was the second-youngest person to start drug court. The youngest participant was terminated.

“I think your success story is the kind of stuff that inspires us,” Reddy said. “And that’s why we continue doing this. So I’m very proud of you, and I want to thank you.”

Reddy, who has been running family drug court, saw other familiar faces in drug court and some he didn’t know.

One participant said he’d be dead without the program. Reddy had another tell the courtroom what it was like to be in prison. Other times, he laughed and he smiled. This is what treatment court hearings are like.

Thursday’s graduation comes at a time when the program’s future is in question. Several Walworth County officials have expressed their frustration over how District Attorney Zeke Wiedenfeld has handled his opposition to the program.

After flying in national drug court experts to give a training and mediate a discussion, some Walworth County officials wanted to leave Wednesday knowing if drug treatment court will continue or not. There was no such resolution.

But Thursday was for Hailey. When her turn came, Reddy said, “Now for the highlight of the day.”

Reading her long-term safety plan, Hailey said in the beginning of the program she didn’t think she needed help. She thought she was a bad person, that she didn’t deserve good things and that no one liked her.

But she was wrong, and she has grown.

“I don’t want to be the person I once was,” she read. “And thank you for helping me find the person that I am.”

Looking forward, she wants to take certified nursing assistant classes. She wants to stay away from hard drugs but drink on occasion (when she’s 21, she clarified). She wants to own a house.

When she’s stressed, she will warn others and remember her breathing. She will use positive self-talk when work gets to her. When she’s pushed to drink, she said she will remember her time in jail.

She wants to be an outstanding mom for her two kids, ages 2 and 6 months. The younger child was in court sleeping, and Reddy asked about him.

“I’m not even going to ask where he got that from,” Reddy said as the courtroom laughed.

As Hailey’s journey as a mother moves forward, she has the support of her own mom, Julie Piper. Piper spoke Thursday, sitting among several other family members and bringing tears to her eyes and Hailey’s.

When this chapter of her daughter’s life began, Piper saw it ending two ways. One way was with Hailey’s funeral.

Despite slim hopes and a “very rough start,” Piper got the ending for which she prayed.

“Today starts a new chapter that once again only you can write,” Piper read to her daughter. “The one thing that I can tell you, the family that’s here for you today, we’re going to be in that next chapter. And every chapter thereafter.