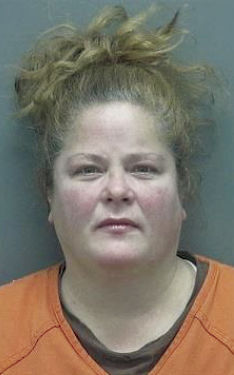 Prosecutors have charged a former town of Harmony woman with stabbing her ex-husband in the chest while the ex-husband says she was intoxicated, according to a criminal complaint filed in Rock County Court.

Stephanie Larson, 52, who now lists an Edgerton address, was charged Nov. 2 with first-degree recklessly endangering safety and disorderly conduct as acts of domestic abuse with a dangerous weapon.

On the night of Oct. 29, Rock County sheriff’s deputies responded to the 4300 block of East Milton-Harmony Townline Road, where Larson lived with her ex-husband, authorities have said.

The deputies found the ex-husband sitting in the bathroom with a stab wound in his chest and blood all over the floor, the complaint states. The stab wound was about 1-inch long and in the man’s sternum.

The man told deputies he came home from working out and was watching TV when Larson started annoying him by singing loudly while intoxicated, according to the complaint. That is when an argument started.

The man said he tried to separate himself from Larson by going into another room, but Larson came in and jumped on him, the complaint states. He said he slapped her to get her away and then locked the bedroom door.

After she kept calling him names and tried to get into the room, the man told Larson he wanted his name off the lease, which made Larson upset, according to the complaint. She picked the lock and entered the room with a knife and stabbed him once in the chest.

The man said he thought it was a kitchen-type knife. He said he did not think she was trying to kill him and instead blamed her intoxication.

Larson told deputies that after a busy day Oct. 29, she bought a pint of vodka and wanted to relax with a drink, the complaint states. She said “something must have gone sideways” when she was singing out loud and playing air guitar.

She said she felt “pissed” and “defeated” during the argument with her ex-husband, who she thought was belittling her, the complaint states.

She also said, “if I recall correctly,” she hit him with a pair of scissors, according to the complaint. She said she didn’t remember much.

She said she had hoped “that he could never think that he could do that to me again,” according to the complaint.

Town of Harmony woman jailed in stabbing of ex-husband

Authorities say a town of Harmony woman is in jail after she stabbed her ex-husband in the chest late Thursday.