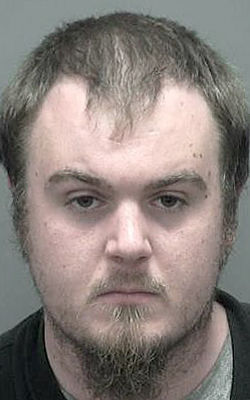 In a voice that broke with emotion, Luke A. Kasten said he is haunted by his actions from a hit-and-run incident more than a year ago.

At times during his sentencing hearing Wednesday, the former Orfordville man wiped away tears as he repeated how sorry he was for the lasting damage he caused Joshua Johnson of Orfordville.

The hit-and-run crash spurred by a dispute in a bar left Johnson with “very severe head trauma that from that moment forward drastically changed his life,” Assistant District Attorney Mary Bricco said.

The prosecutor also said she learned the incident has exacerbated Johnson’s bipolar disorder.

“He’s on multiple medications. At times he’ll sleep for days, then he’ll be up for days,” Bricco said. “He can’t be in crowds anymore. He walks with a limp. He doesn’t have a sense of smell. He can’t hear out of one ear.”

Kasten said he wished one day to “possibly, maybe, hopefully be his friend” and help Johnson to show how truly sorry he is.

Judge Karl Hanson sentenced Kasten to two years in prison and two more of extended supervision, although the judge spoke highly of Kasten’s character beyond that one moment in question.

The incident started with an altercation between Kasten and Johnson at Knute’s Bar & Grill in Orfordville in July 2019, according to the criminal complaint.

After a bartender told them to leave, Kasten said he and a friend drove by Johnson as he walked home and tried to “antagonize” him, the complaint states.

Kasten told police that Johnson swung a guitar at his car before Kasten tried to swerve around him—but still hit Johnson. Kasten then left the area.

Johnson suffered a skull fracture and was put into a medically induced coma, according to the complaint.

All sides essentially agreed that the reason they were at a sentencing hearing Wednesday was because Kasten fled the scene and hid his car.

Bricco said Johnson’s mother has said she felt bad for Kasten, but she also believes he has to pay a price.

Kasten’s attorney, Jason Sanders, argued for five years of probation with a year in the Rock County Jail. He pointed to his client’s lack of a criminal record and other positive traits in questioning why Kasten’s first stop in the criminal justice system should be prison.

Sanders said Kasten has regretted driving away from the incident every day since.

Hanson said he sees a lot of people say they’re sorry, and sometimes he doesn’t fully believe them. But he believes Kasten is sincere.

The judge said he can’t be sure how much of a role alcohol played in the incident, if any, but he encouraged Kasten to seek treatment for an “alcohol issue.”

Hanson said Kasten should use his son as motivation to stay on a good path.

Kasten is scheduled for a restitution hearing at 8:30 a.m. Dec. 9 to determine how much, if anything, he will pay in this case beyond court costs.

Because the morning sentencing hearing occurred over video and Kasten was not at the courthouse, Hanson gave Kasten until 3 p.m. Wednesday to turn himself in at the sheriff’s office.

The judge said someone recently did not report to the jail as directed.

But Hanson said he did not think Kasten would make a similar decision.

“This isn’t the end of the line here. The page is turned, and it’s up to you to write where the story is going to go from here,” Hanson told Kasten at the end of the hearing.

“The tragedy is there,” he said. “But I think that this is still something that, given your sincerity and given the outlook that you demonstrated, I think that you can write a good chapter going forward.”

A former Orfordville man pleaded guilty Monday in a hit-and-run crash in July 2019 that left a man with a serious head injury.