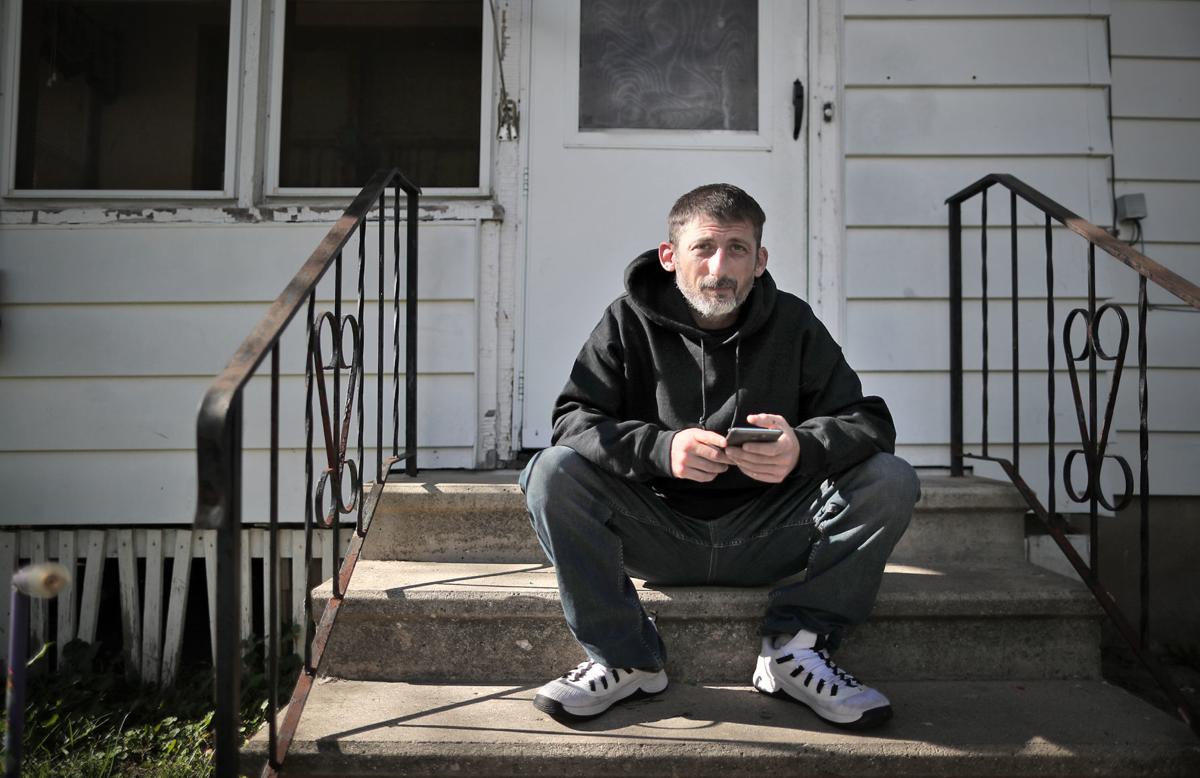 Jay Pretty, founder of Worldwide Predator Hunters, sits on the front steps of his Edgerton home Wednesday. Pretty said his private group works to set up stings that lure sex predators into Edgerton to expose their criminal acts. 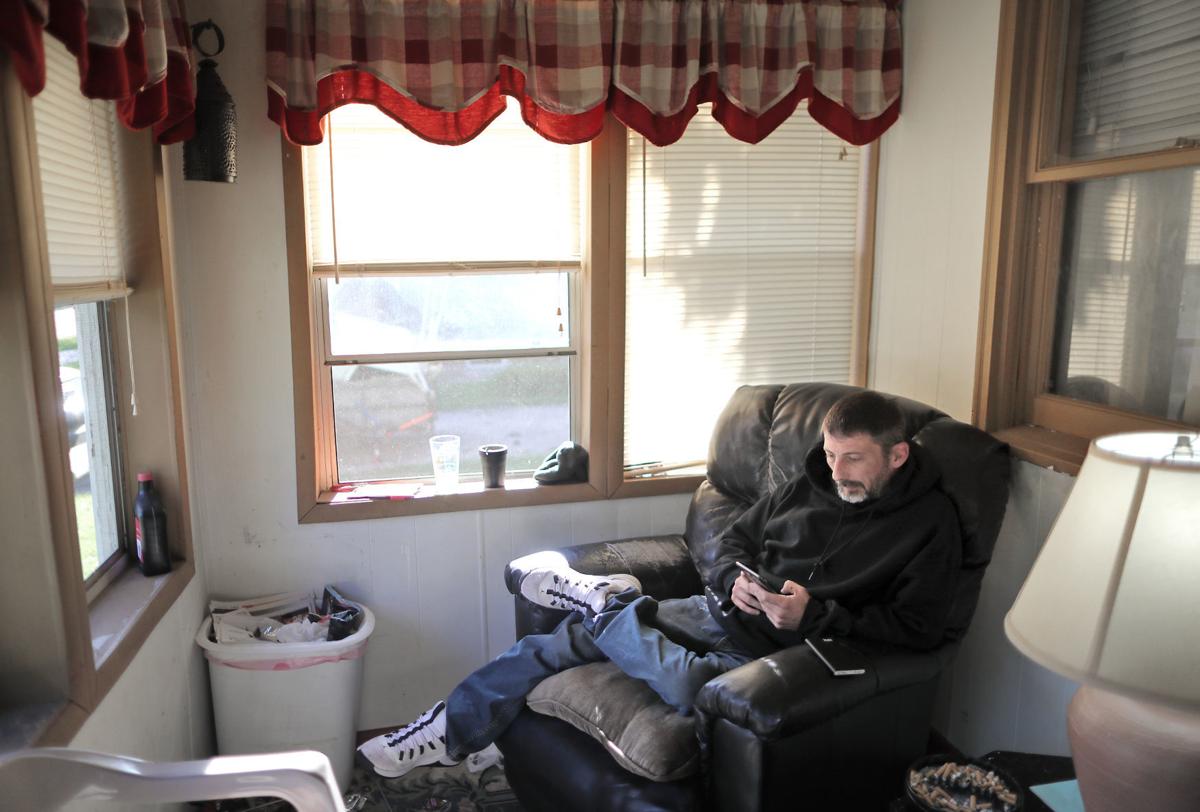 WorldWide Predator Hunters founder Johnny Jay Pretty works on his phone while inside his Edgerton home on Wednesday. 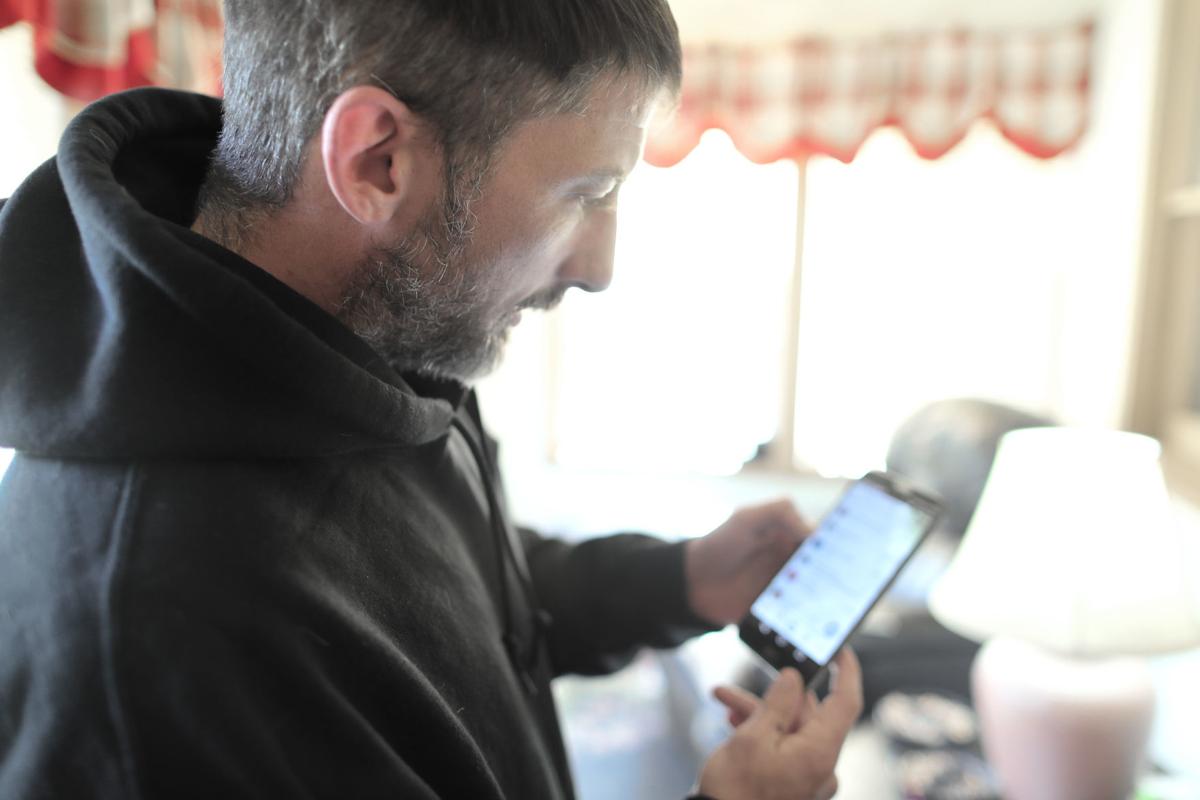 Worldwide Predator Hunters founder Johnny Jay Pretty shows a log of previous social media chats he and his group had with people he suspects are sex predators.

Jay Pretty, founder of Worldwide Predator Hunters, sits on the front steps of his Edgerton home Wednesday. Pretty said his private group works to set up stings that lure sex predators into Edgerton to expose their criminal acts.

WorldWide Predator Hunters founder Johnny Jay Pretty works on his phone while inside his Edgerton home on Wednesday.

Worldwide Predator Hunters founder Johnny Jay Pretty shows a log of previous social media chats he and his group had with people he suspects are sex predators.

A self-styled sexual predator “hunter” is drawing criticism and praise but an icy reception from law enforcement for his work luring to Edgerton people he says are primed to commit sex crimes against minors.

An Edgerton police lieutenant said his department and the Rock County District Attorney’s Office are leery of getting involved with Pretty’s group.

The Wisconsin Attorney General issued a statement discouraging groups from such behavior.

Pretty said he and others in his group create “decoy” profiles of minors to attract adults seeking illicit contact with minors.

Pretty and his partners have live streamed videos of encounters with the people his stings have lured into Edgerton.

So far, Worldwide Predator Hunters has lured three people Pretty said came from outside Edgerton to meet with his group’s decoys. Pretty said the meetings have been at public places such as retail store parking lots and public parks in Edgerton.

Pretty’s group last week called Edgerton police to report an encounter with a man they lured from Milwaukee. Pretty said he turned over video and social media records to police that he said prove the Milwaukee man set up an encounter with his group’s decoy.

Pretty said the man thought he was meeting a 15-year-old girl to spend the night with her while her parents weren’t around.

“The DA hasn’t called back. The secretary at the courthouse is saying that law enforcement should be taking a report and sending it in. I’m getting mixed communications,” Pretty said.

“Then people go on Facebook and social media pages making it sound like we’re the predators. They’re saying, ‘If you see the Predator Hunters, call the police.’ And we’re here trying to save kids.”

The Rock County District Attorney’s Office did not respond to a Gazette inquiry on Wednesday.

“As a career prosecutor who spent a bulk of my career going after child sex predators, I understand better than anyone the drive to protect the innocent from online predators and pedophiles. But these citizen groups need to know—your unauthorized actions are more likely to help a bad guy go free than put him behind bars. Just confronting the suspect on your own can be highly dangerous, and you run the major risk of ruining evidence for a criminal prosecution.

“In the strongest of terms, DOJ discourages these organizations from continuing to operate in this manner.”

Edgerton Police Lt. Randy Meehan told The Gazette his department hasn’t warmed up to Pretty’s work. Meehan said his department is looking at records from one of Pretty’s stings, but he said the department and the Rock County District Attorney’s Office are leery of getting involved.

Meehan said it presents a gray area in the “integrity” of normal criminal investigative processes because the stings are drawing people into Edgerton and the work is being done outside the loop of police investigations.

“There’s a disconnect between what they’re trying to accomplish and what law enforcement needs to do to bring forward a prosecutable type of event,” Meehan said.

Pretty’s methods likely aren’t illegal, Meehan said. He’s not aware of any other similar, “hunting” group in the U.S.

Meehan said he has met with Pretty, whose “hunting” team has a two-man crew of a cameraman and a security guard in case encounters go awry.

Meehan said he is concerned about Pretty’s group luring in possible criminals from outside the area who could pose risks not just to Pretty’s group but to others.

“I’d prefer they not bring sexual predators into the city of Edgerton. If they’re going to continue to do it and wanted our assistance, they should get together with the (Rock County) district attorney’s office and figure out what the DA would need for successful prosecution for people they lure in,” Meehan said.

The Edgerton Police Department posted a Facebook message, saying the department opposes sex crimes but it does not endorse Pretty’s work or his methods.

Local residents offered Facebook comments on both sides of the issue. One woman said Pretty’s work is commendable but his group should stop coordinating stings in Edgerton.

“I believe this group has good intentions, (but) I do not support the manner in which they are bringing sexual predators into Edgerton,” The woman wrote. “I do actually applaud them for trying to make a difference, however I believe if they are going to do this they should be meeting up with these people where they (the predators) are located.”

Another woman believes Pretty’s group should be lauded.

“If they’re doing it legally, what’s the issue?,” she wrote on Facebook. “This isn’t just an issue here. It’s everywhere. Children are being lured on the internet and sold into sex trafficking all the time. Unfortunately with how far it’s gotten with no end in sight it’s nice to see someone trying to do something about it.”

The Rock County Sheriff’s Office in the early 1990s ran a sting that used magazine classified ads to lure in people who collect child pornography. According to Gazette reports, the county disbanded the sting because of the cost to taxpayers to investigate and jail people lured from outside the county.

Pretty said his group is trying to catch predators who could prey on minors, if not in Edgerton, then someplace else.

He believes efforts like his group’s could help police and prosecutors band together across county and state lines.

Pretty said he others in Worldwide Predator Hunters accept no money. They operate out of their own pockets.

Pretty says he’s not trying to be a cop, a vigilante or a “hero,” and during encounters, he’s “calm” and humane toward the people he lures to Edgerton.

He said he tells the people they aren’t under arrest, and that they can leave at any time.