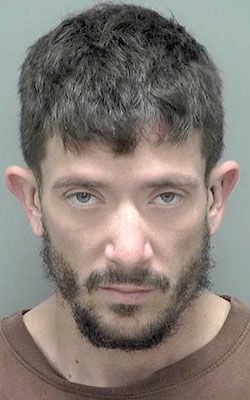 A Janesville man faces criminal charges after police said he crashed into another vehicle while driving a stolen car, leaving a passenger with a brain bleed, an indented skull and a “grim” prognosis, according to a criminal complaint filed in Rock County Court.

Weaver was also charged with operating a motor vehicle without owner consent and cited for refusing to take a test for intoxication after his arrest, court records show.

Janesville police reported that Weaver drove south in the northbound lane of Pontiac Drive before he struck a car carrying a man and his fiancee, according to the complaint.

Weaver seemed confused and despondent after the crash, and at the hospital he ate what staff described as a “white powdery substance in some sort of plastic,” according to the complaint.

Weaver later told police at the Rock County Jail, “I was pretty f----- up on benzos. I don’t remember,” according to the complaint.

“I hate knowing I put someone in the hospital,” the complaint quotes Weaver as saying.

The woman who was pinned in the passenger seat of a Toyota Tundra had to be intubated at the hospital, where she was unconscious, according to the complaint.

A medical examiner told police the woman also had a subdural hematoma and her brain had shifted 5 centimeters to the right, according to the complaint.

“The medical examiner’s prognosis was grim and stated that most people do not recover from these types of injuries, and if they do, they will either be brain dead or require long-term care and rehabilitation,” the complaint states. “The brain function most likely would never be the same.”

An update on the woman’s current condition was not immediately available Tuesday.

An off-duty nurse who happened to be jogging in the area helped tend to the woman at the scene, the complaint states.

The driver of the car Weaver hit broke his left hand, wrist and five fingers, according to the complaint.

The car Weaver was driving belonged to a man who had loaned the car to a woman he knows. Police spoke to that woman, who said on July 2 after getting into her car, she ran back inside to grab something only to learn the car was gone when she returned, the complaint states.

Prosecutors filed the complaint against Weaver on Friday, July 10, and a court commissioner ordered him held on a $10,000 cash bail, according to online court records.