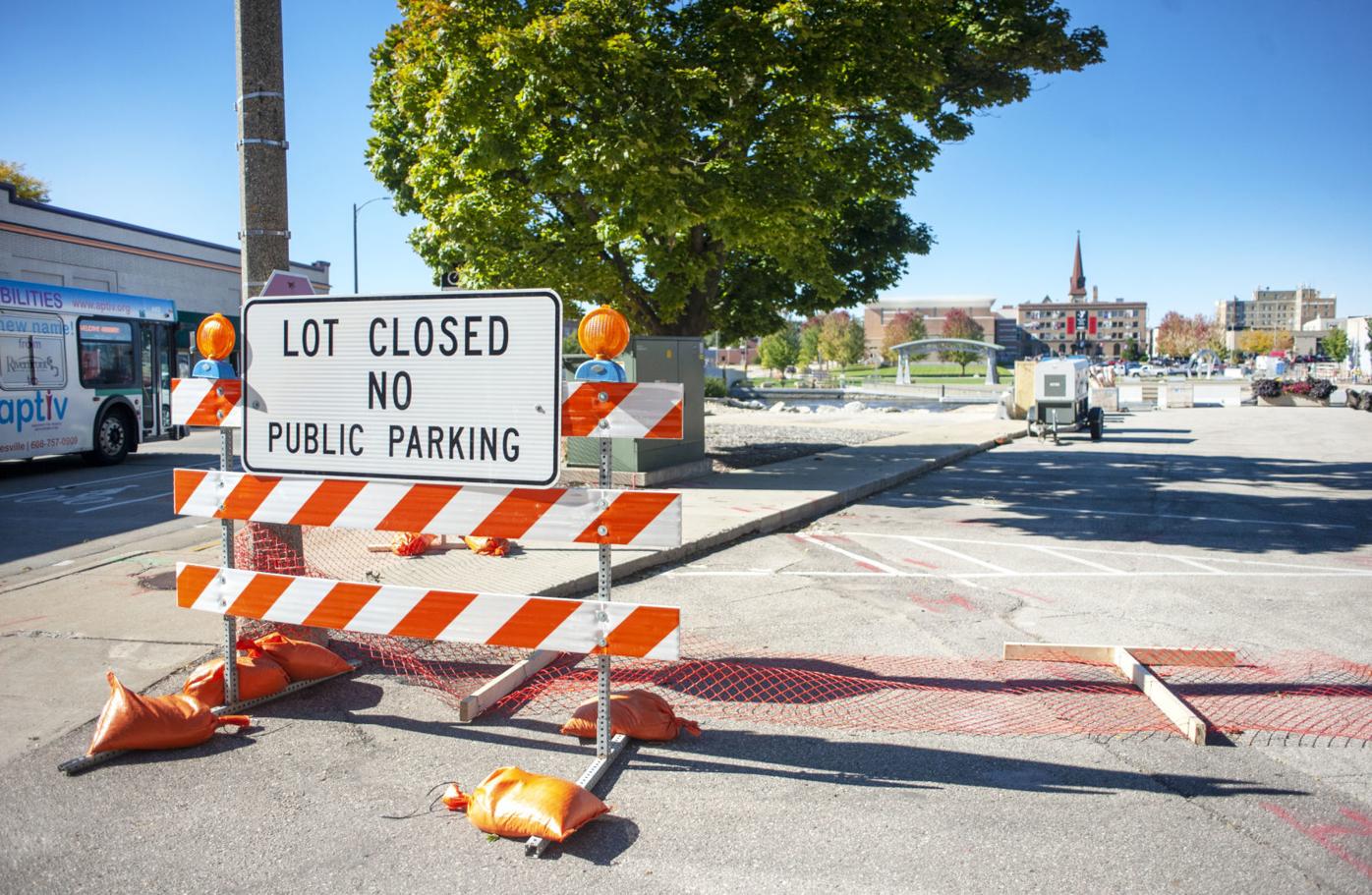 A lot near the Venue in downtown Janesville is closed for construction on the Milwaukee Street bridge. The lot usually is open for public parking. 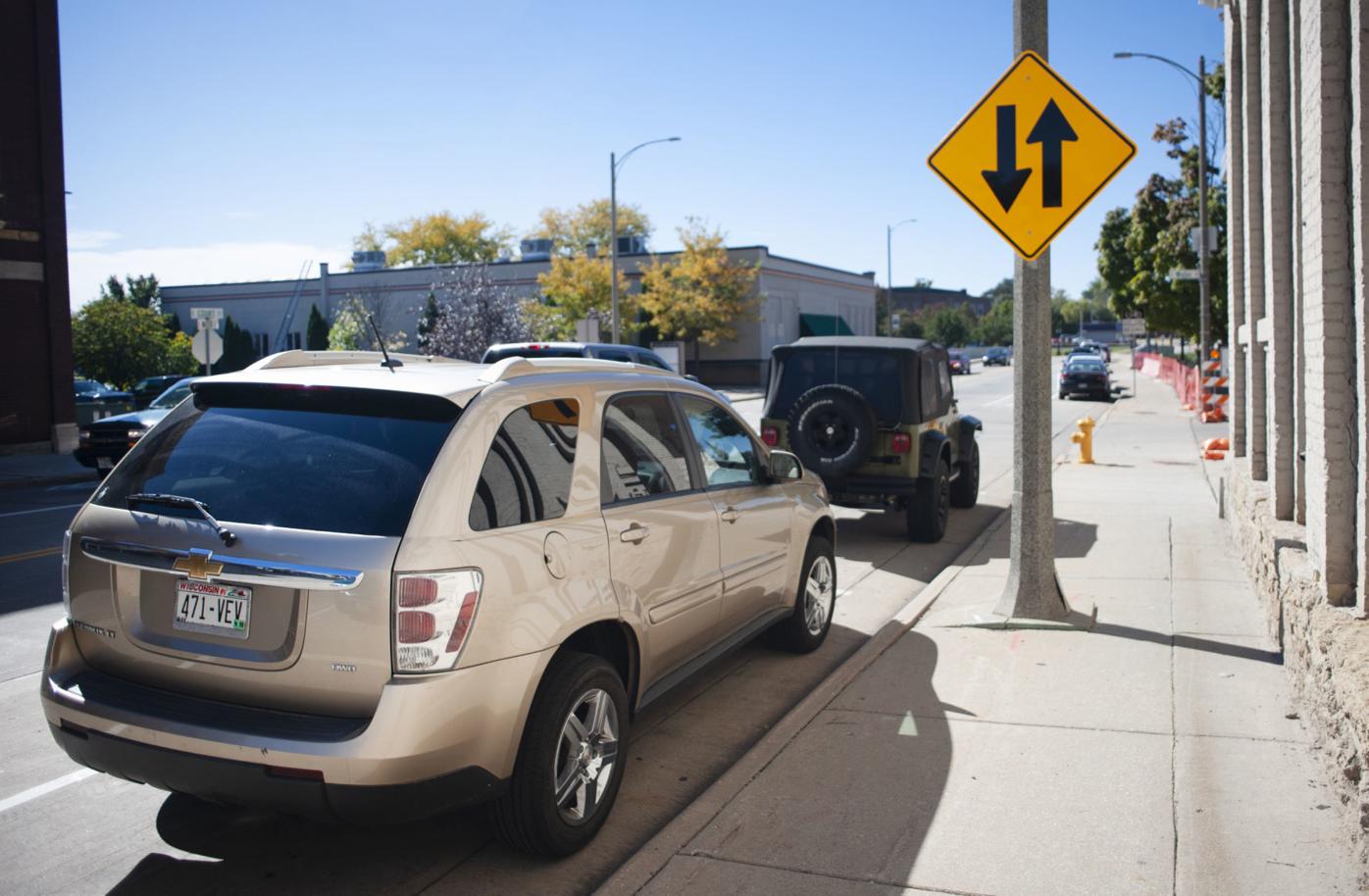 Vehicles fill almost all of the parking spots along Court Street on Thursday, Oct. 4, 2018, in downtown Janesville.

A lot near the Venue in downtown Janesville is closed for construction on the Milwaukee Street bridge. The lot usually is open for public parking.

Vehicles fill almost all of the parking spots along Court Street on Thursday, Oct. 4, 2018, in downtown Janesville.

At 1 p.m. Friday, zero street parking spots were available along the first block of South Main Street in downtown Janesville.

The 51-stall parking lot between South Main Street and South Parker Drive was sewn up, too, except for two vacant, two-hour spots.

Along East Milwaukee Street between Parker Drive and the river, there was one open spot.

Meanwhile, west of the Rock River, nary an on-street parking space was open along the first two blocks of West Milwaukee Street just west of the now closed and partially torn-out Milwaukee Street bridge. The same scene wrapped around the corner onto South Franklin Street, where parking was nearly full.

That’s a one-day snapshot by a Gazette reporter of the parking situation along the two main business arteries in the heart of downtown—an area where for weeks storefront operators have been contending with a barrage of construction tear-ups.

Last week, contractors for the state Department of Transportation took more parking off the table. Crews sealed off the 41-spot Town Square East public lot behind Olde Towne Mall that’s used by customers and employees of dozens of businesses along South Main Street.

The lot is earmarked as a temporary construction “staging area” for the Milwaukee Street bridge replacement. The lot likely will remain closed for most or all of the project, which is slated to run through late June 2019.

The two closed lots, according to a city analysis, had daily occupancy rates of between 75 percent and 87 percent, which would rank them among the most popular parking areas in the core of downtown.

According to city parking inventories, closure of the two lots has cost the core of downtown 125 off-street parking spots in the last six months.

The street projects and hotel development could be a shot in the arm to the downtown’s economy along with needed upgrades to downtown infrastructure. But right now, some business operators say the construction and parking dislocation have them in a choke hold.

On the east side of the river, construction crews set to work last week cordoning off the Town Square East lot with orange plastic fencing.

A Milwaukee Street bridge replacement project map that the state Department of Transportation generated in April 2018 showed the lot was earmarked for closure as a staging area. Yet, some South Main Street business operators said and they were unaware of the state’s plans to close the Town Square East lot it until they got a city mailer detailing the state’s plan.

The mailer came just a few days before the bridge replacement was slated to start.

Britten Langfoss, who owns and operates The Venue, an event space at the corner of Main and Court streets, said her customers most often park at the Town Square East lot that’s now closed.

Langfoss said she’s had to tell wedding parties who’d already booked receptions at The Venue this fall that they now won’t be able to use the Town Square East lot. She said short notice businesses got from parties who planned the bridge project has trickled down. For her, it’s impacting people’s wedding days.

“I really don’t want to put a negative spin on things, but the thing that bothers me is that a bridge construction staging area was not discussed. It was news to me, basically. People got a letter last week asking us to inform all the tenants (of the lot closure),” Langfoss said. “It didn’t give any of us much time to get any notice out to tenants or customers.”

In recent weeks, a group of downtown business operators have formed an ad-hoc parking committee through private nonprofit Downtown Janesville, Inc. The 13-member group has begun hatching strategies and plans to present the Janesville City Council to counter short-term and long-term loss of parking in downtown’s core.

Some of the group’s ideas:

Emily Arthur, who is the director of Janesville’s downtown business improvement district and a member of the ad hoc parking group, said businesses are supportive of the city’s push this month to start cracking down on parking violations downtown. She said some downtown businesses like the idea of a voucher system that could give employees or people with longer appointments flexibility on parking in timed spots.

At a parking committee meeting last week, some hot topics were the Milwaukee Street bridge replacement and its impact on parking, including the project’s temporary knockout of the Town Square East lot.

It comes as the city continues to wrap up work on South River Street. The overlapping projects have made navigation along the downtown riverfront corridor a game of hopscotch through closed streets, barricaded dead ends, sealed-off parking lots and construction and utility vehicles parked all day along side streets.

That’s got some downtown business operators anxious over whether customers can find them and where they might be able to park when they get there.

As the Milwaukee Street bridge project started, overflow from displaced parking began to fill up nearly every storefront parking spot in the streets along the riverfront—sometimes for most of the day.

That seems to defy a city parking inventory taken just two months ago that showed street-side parking in some areas downtown has a daytime vacancy rate of 50 percent to 75 percent. Businesses have started placing parking map fliers on windshields, urging workers who park downtown daily to find all-day parking elsewhere to free up storefront parking.

The 125 spots knocked out in recent weeks via closure of lots on West Milwaukee Street and behind South Main Street account for more than 10 percent of all public off-street parking in the central downtown area between Centerway and Court streets, according to a 2017 city parking inventory.

For Jeni Lindstrom-Sauser, who operates Studio 107, a salon and day spa in an upstairs suite on West Milwaukee Street, every nearby parking spot is crucial. Sauser, a member of the ad-hoc business parking committee, said the salon serves a daily volume of walk-in and scheduled customers who already are navigating around construction and sudden shifts in available parking spaces.

“A lot of people don’t realize the kind of activity some of the businesses here see. Between the salon and our tenants, we’ve got at least 150 people, both customers and employees, coming and going every day,” she said.

The city’s latest downtown public parking inventory was collected between 7 a.m. and 10 a.m. over three days in mid-August 2018. It shows an additional 184 on-street spots and an additional 353 off-street spots compared to a survey in 2017.

But the city's 2018 count was extended beyond the boundaries of the 2017 survey to include parking spots in areas several blocks south of the core of downtown.

For instance, the bulk of additional off-street parking identified in the 2018 inventory appears to be 241 spots at the Hedberg Public Library, the Janesville Performing Arts Center and two smaller lots along West Van Buren and West Wall streets. Those four lots were not counted in the city’s 2017 parking survey, and they’re between four and six blocks south of the area surveyed in 2017.

For on-street parking, an apples-to-apples comparison is more difficult because the city organized its counts in 2017 by quadrant, but the 2018 inventory counted spots street-by-street.

She said some business operators for years have decried a lack of downtown parking, but she acknowledged that in the past city officials often have dismissed such complaints.

She said momentum is building downtown through revitalization and redevelopment. She believes it might be time to give parking concerns a closer look.

“The city still says we have enough parking stalls for people coming downtown—that maybe you can’t park right in front of the place you want to be, but that there’s enough stalls. I said in our (2019) strategic planning study session, ‘You know, that’s not good enough,’” Conley said.

“Just because you count stalls and you think there’s enough, if you have business owners that are saying parking where I’m at is a big issue and my business is going down because of it, you have to look at it more closely.” 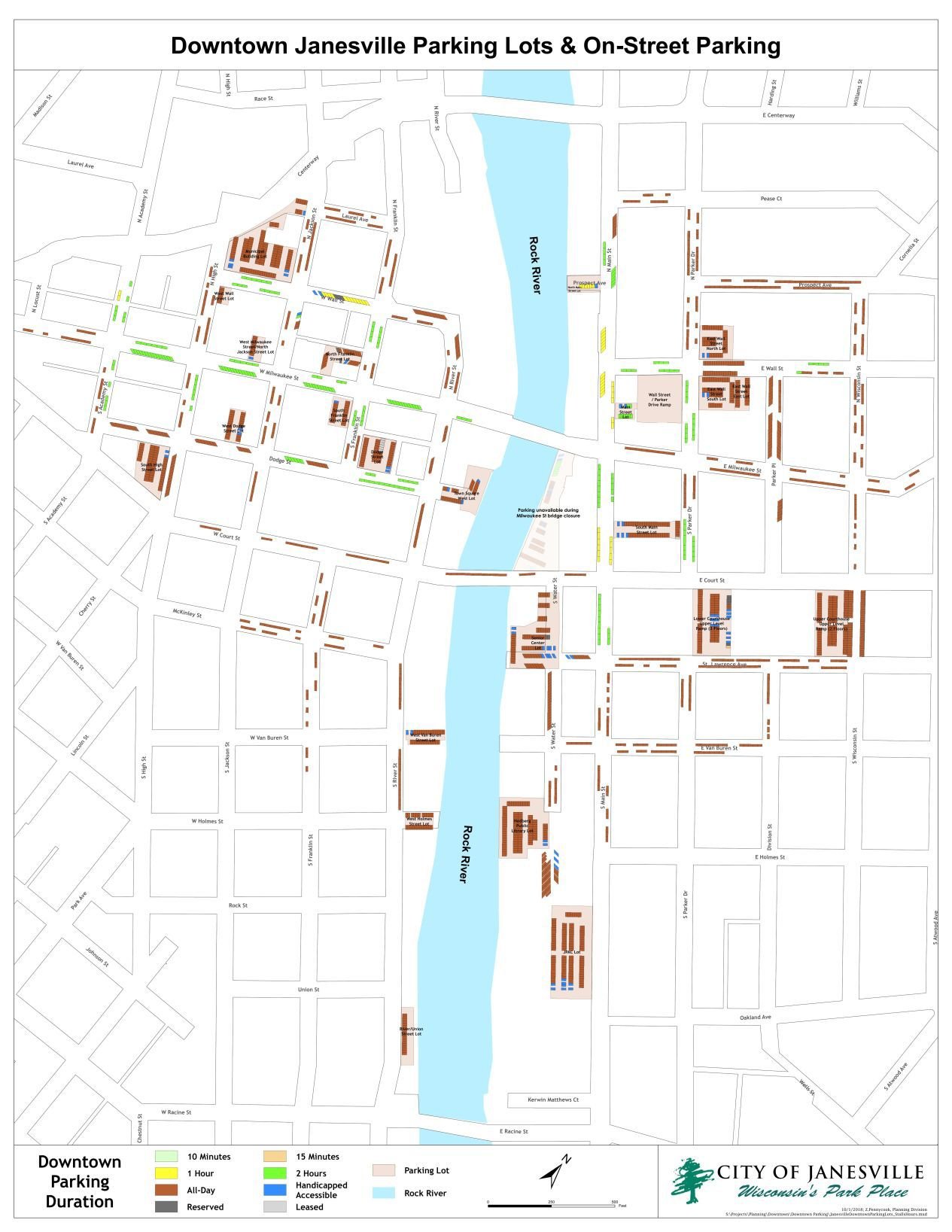 Finding a spot to park in downtown Janesville has gotten more difficult in the past two years, according to a recent parking study.