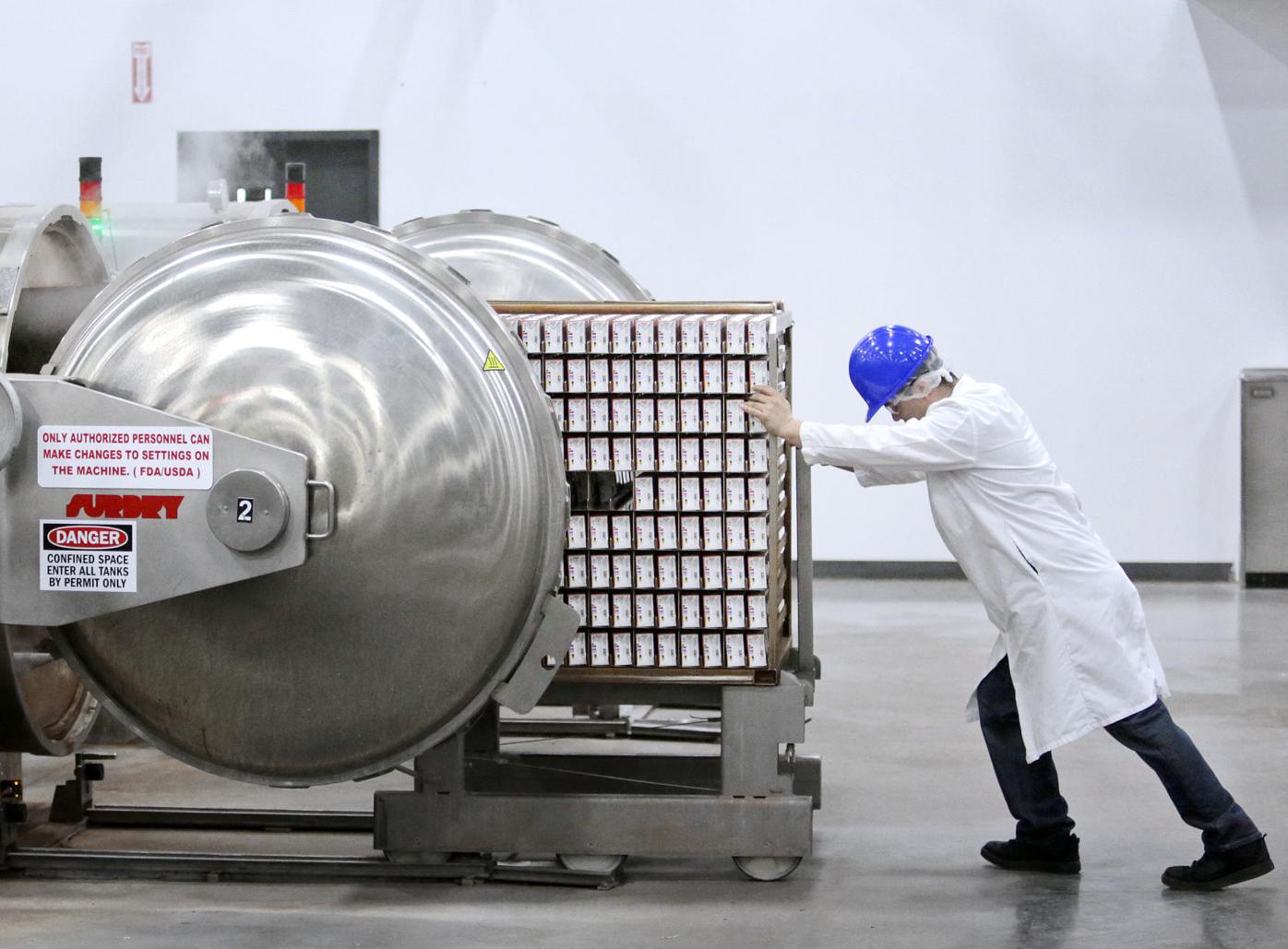 An employee at IPM Foods, a Janesville soup, broth and sauce producer and packager, pushes a cart filled with packaged food into heat sterilizing machine. IPM is one of about 20 food-related industries in Rock County that are becoming movers and shakers in local manufacturing job growth. 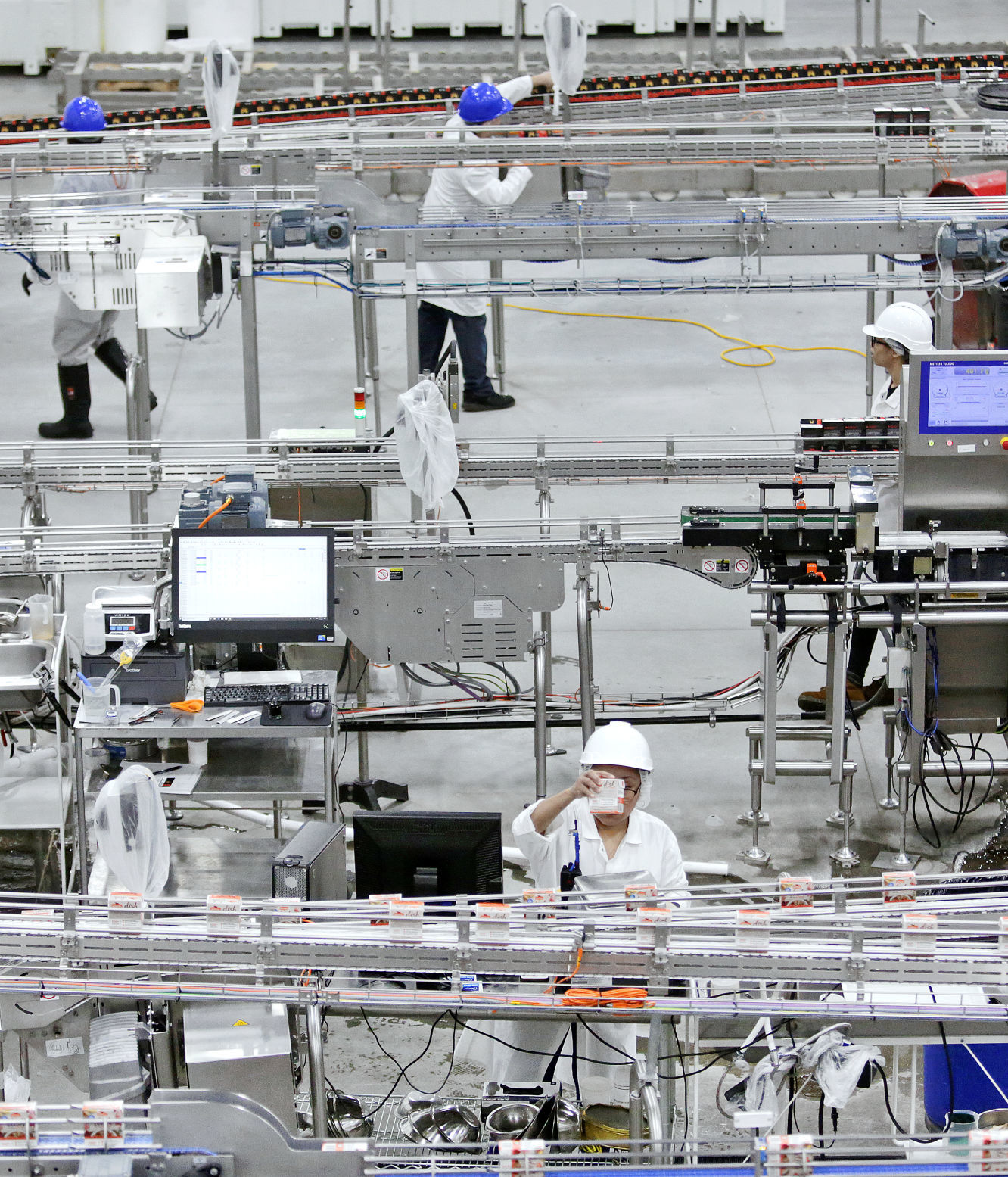 IPM Foods employees run quality checks on packaged food as it moves along a manufacturing line toward a heat sterilization machine at the company’s food production and packaging plant in Janesville. 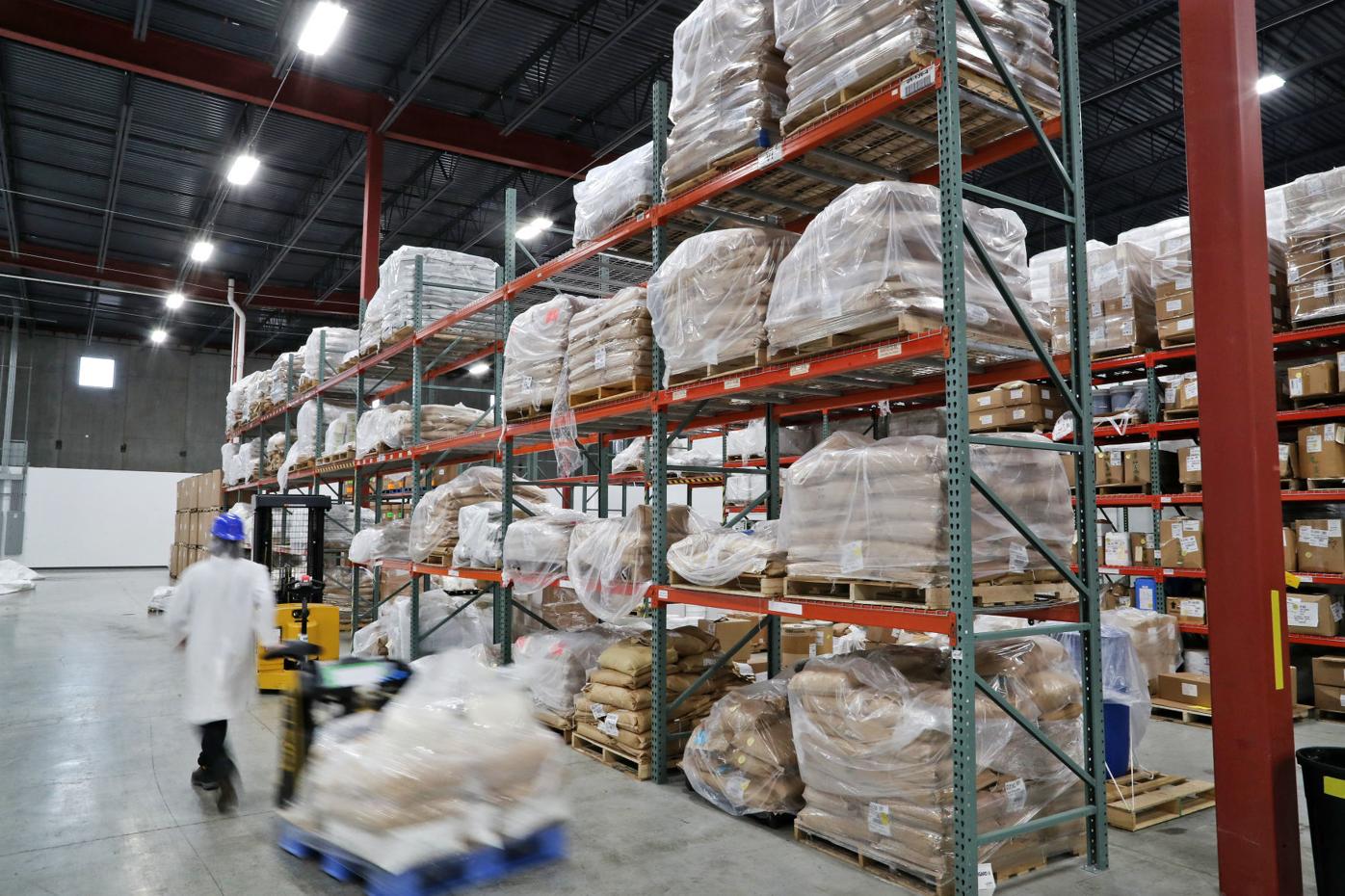 An IPM Foods employee moves ingredients on a pallet from dry goods storage at the company’s soup, sauce and broth manufacturing and packaging plant along Capital Circle in Janesville. 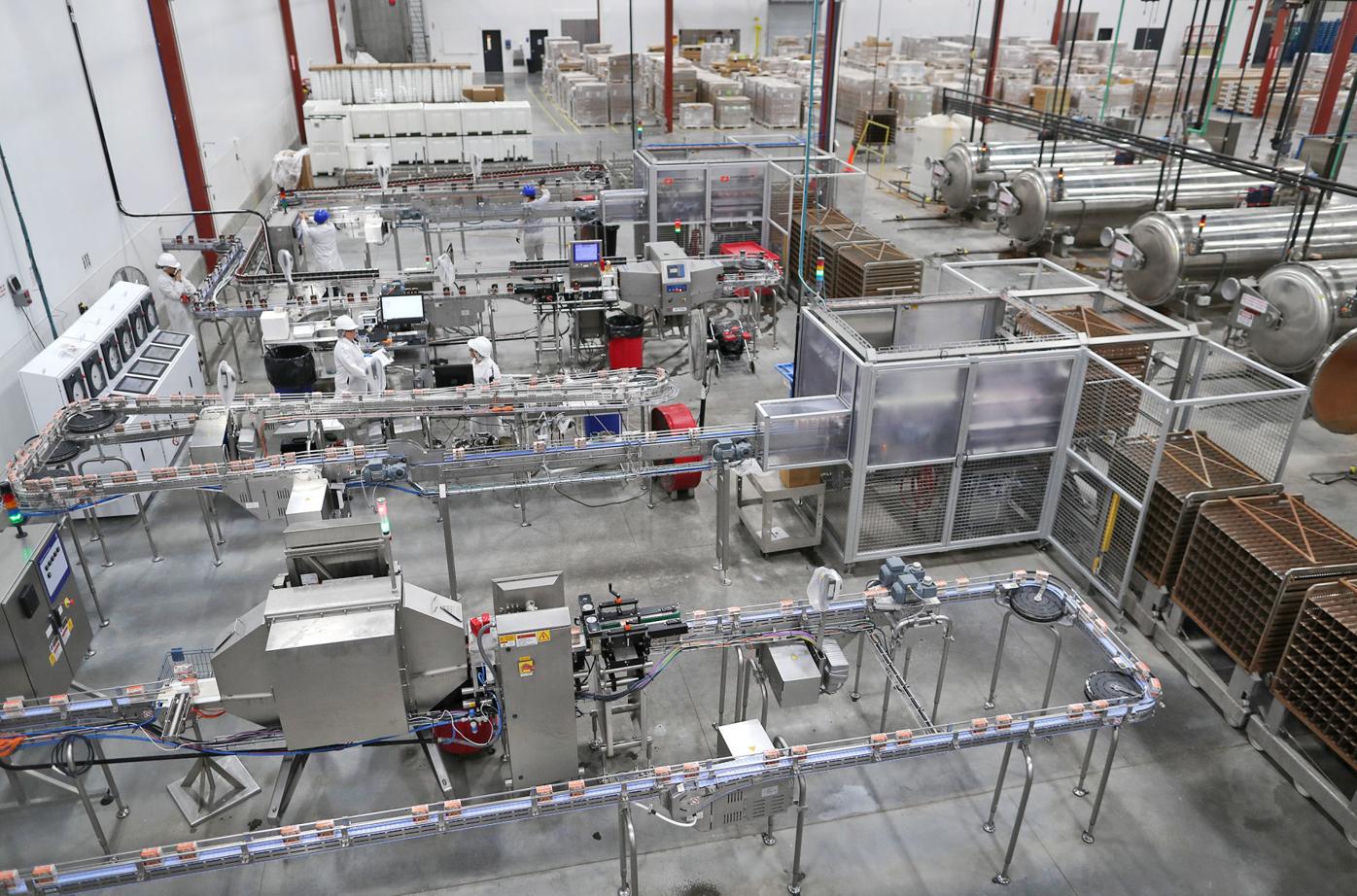 IPM Foods employees run quality checks on packaged food as it moves down a manufacturing line toward a heat sterilization machine at the company’s food production and packaging plant in Janesville. 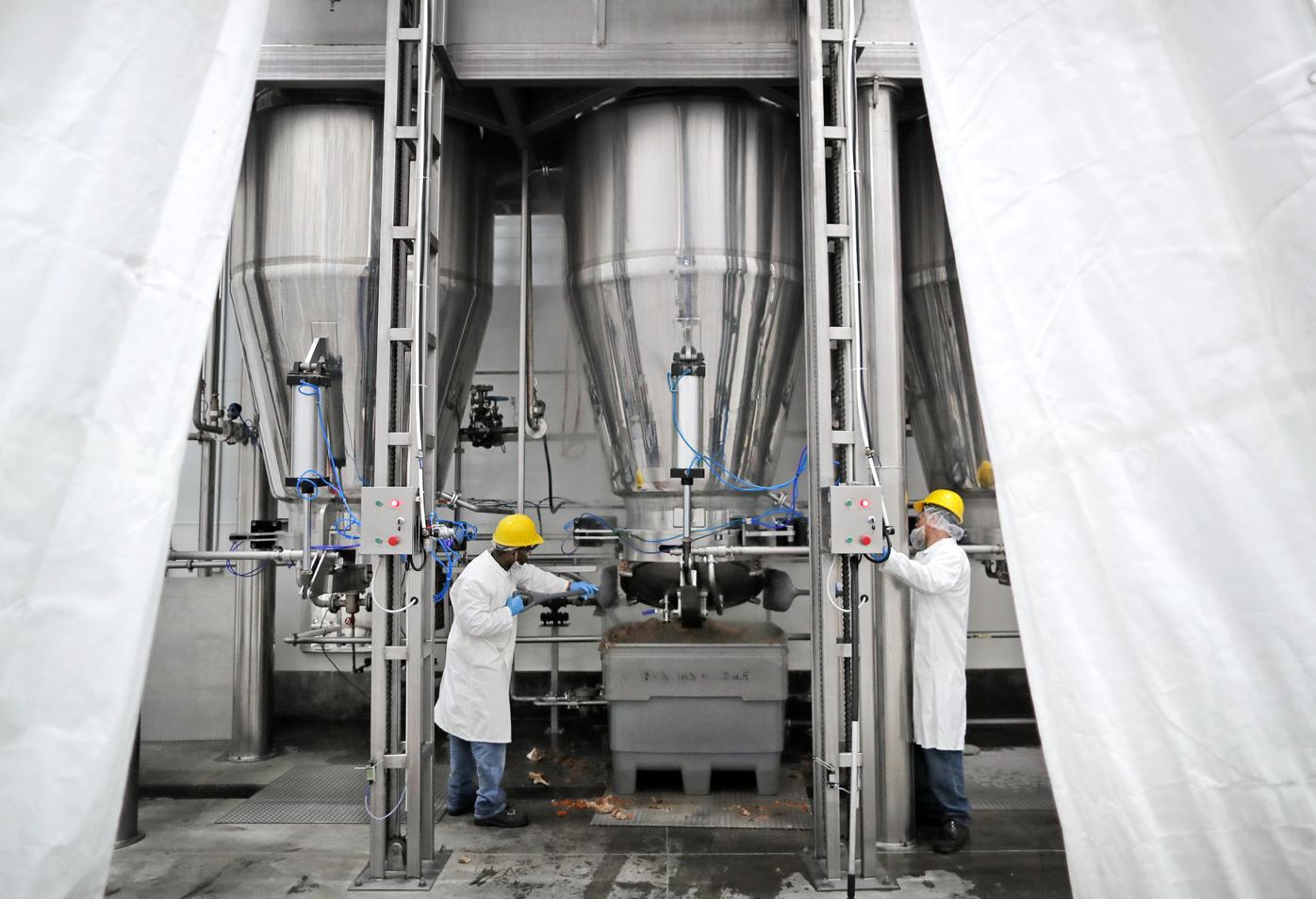 Two IPM Foods employees drain food items into a bin below from the beef broth-making process.

An employee at IPM Foods, a Janesville soup, broth and sauce producer and packager, pushes a cart filled with packaged food into heat sterilizing machine. IPM is one of about 20 food-related industries in Rock County that are becoming movers and shakers in local manufacturing job growth.

An IPM Foods employee moves ingredients on a pallet from dry goods storage at the company’s soup, sauce and broth manufacturing and packaging plant along Capital Circle in Janesville.

IPM Foods employees run quality checks on packaged food as it moves down a manufacturing line toward a heat sterilization machine at the company’s food production and packaging plant in Janesville.

Two IPM Foods employees drain food items into a bin below from the beef broth-making process.

Employment at local manufacturers has faced a long climb back after the departure of General Motors a decade ago and the loss of about 5,000 jobs in auto and transportation equipment manufacturing.

Since 2009, and more recently, as the manufacturing sector in Rock County has recovered from a major body blow, some areas of the local manufacturing sector have been hot spots for growth and the creation of new jobs. In some cases, the growth is outpacing local and statewide trends.

For some local manufacturers, businesses—and hiring—has been booming. For instance, if you’re into soup, the time is right.

Since 2017, Janesville soup producer and specialty packager IPM Foods has more than doubled the employee headcount at its Capital Circle facility in the city’s east-side industrial park. IPM Director James Carroll said the company has grown from 47 employees in 2017 to about 140 in early 2019. That comes as the company has branched into new ventures, including specialty broths, sauces and vegetables it mixes and packs in environmentally-friendly cartons.

All told, the food manufacturing industry in Rock County totaled 2,079 jobs as of 2018—a 25-percent growth in jobs since the pre-recession years of 2006, according to data from the Southwest Wisconsin Workforce Development Board.

The food industry joins a few other hot segments of the local manufacturing sector, including plastics, rubber and chemical production. New jobs created in those three manufacturing areas since 2006—about 960 in total—now make up nearly 10 percent of the 10,430 workers within the broader local manufacturing industry, according to state data.

Food manufacturing is becoming a bigger driver for local jobs, outpacing job creation and growing in ranks that outnumber some of Rock County’s largest manufacturing segments such as machinery manufacturing and metal fabricating. Machinery and metals each employ about 1,600 local workers, yet both of these increasingly automated sectors have seen job growth remain flat during the last decade, according to state numbers.

Food engineers and manufacturers such as IPM continue to grow.

IPM is considered a “co-packer,” which means its mixes soup and other food ingredients and then packs the food for major soup and food companies it serves.

IPM has plans later this year to begin making and packing its own private-label products for grocery retailers, Carroll said.

“What that means is more growth for us,” he said.

IPM also is the parent company of NaturPak, a new pet food manufacturing/packaging company that has operated in a former IPM facility in Beloit since 2018.

This September, NaturPak plans to move into a 100,000-square-foot facility a developer is now building on Janesville’s south side on land near Dollar General’s mammoth distribution center.

NaturPak’s new home is in a city of Janesville tax increment financing district along an industrial park street the city has named Innovation Drive.

IPM President Pawel Marciniak said his company is at a crossroads of massive growth by the food companies it serves, and it is changing viewpoints toward food consumption by millennials who prefer paper food packaging over metal cans and glass jars.

“The city road name Innovation Drive is perfect for our company. We’re innovation—something new, an innovation in technology in the packaging,” Marciniak said.

“We are a success story of the market. We present our clients with an innovative approach to packaging” and offer consumers “something of a roadmap of environmental friendliness.”

What that means on the ground in Janesville: By next year, and across a three-year term, Marciniak says NaturPak and IPM collectively will employ about 300 people.

That would put Marciniak’s companies in the same league with two of Rock County’s largest manufacturing employers: Beloit food ingredient manufacturer Kerry Ingredients, which in the fourth quarter of 2018 had 700 employees, and Seneca Foods in Janesville, which late last year had 400 employees, according to a state data.

Under the surface, Marciniak said his companies face the same issues other area manufacturers do in hiring and retaining workers—low unemployment and a labor pool that remains the thinnest in at least two decades, and upward wage pressure that comes as local companies compete to employ an increasingly limited number of job seekers.

Marciniak said he views recruitment and hiring differently than some in the food sector or other areas of manufacturing. IPM doesn’t disclose its pay scales for rank-and-file workers, but Marciniak said his company has seen its employees be able to afford homes and newer, more reliable vehicles.

“It’s well higher than minimum wages, and there is additional bonuses and fringe benefits for employees to work,” Marciniak added. “We’re also giving people—a very young, enthusiastic employee base—incentive. We encourage them and educate them and promote them within. Our programs are not just to get something out on the market and used. We try to open the door for potential growth. You have to train and remain very competitive within to hang on to your people.”

Recently, Carroll said, the company has grown its in-house flavor and food science research and development team from two workers in 2017 to six today. Carroll said those positions require training in biology and nutrition, but the jobs offer solid manufacturing pay.

Marciniak said as his food industry companies grow, he is encouraged by signs that local officials are focusing on affordable housing.

He and Carroll said IPM is drawing a significant number of workers who commute from northern Illinois and Dane County, and it would be ideal for some of those workers to have readily available housing here so they can relocate.

Marciniak believes economic development officials for the city are making smart moves by trying to spur apartment and home development through tax incentives and shifts toward more flexible uses of zoning.

“It’s very important, working on this step to help people relocate to Janesville, to show them the different lifestyle ... the better and affordable lifestyle here, and give them a chance to actually come in,” he said.