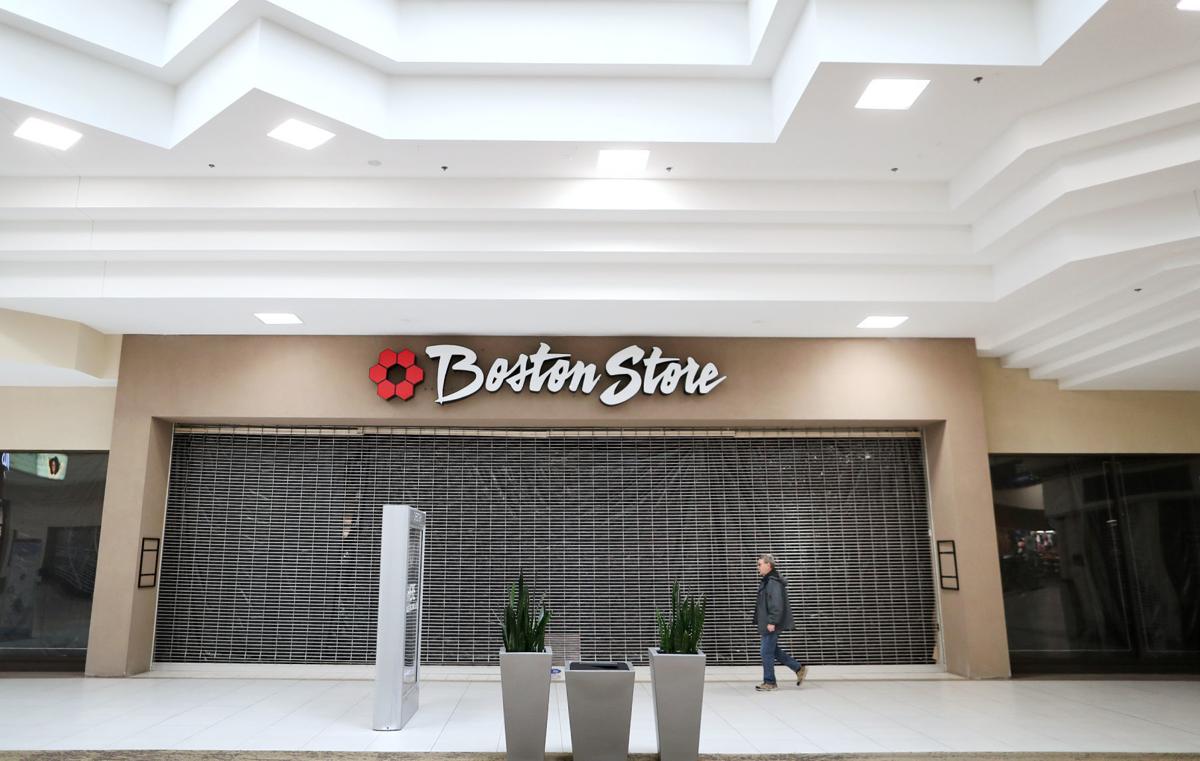 The former Boston Store at the Janesville Mall could become the new home of Hype Indoor Adventures, a family activity and play center that could bring amusements such as rock climbing, go-karts, ax throwing and other activities. 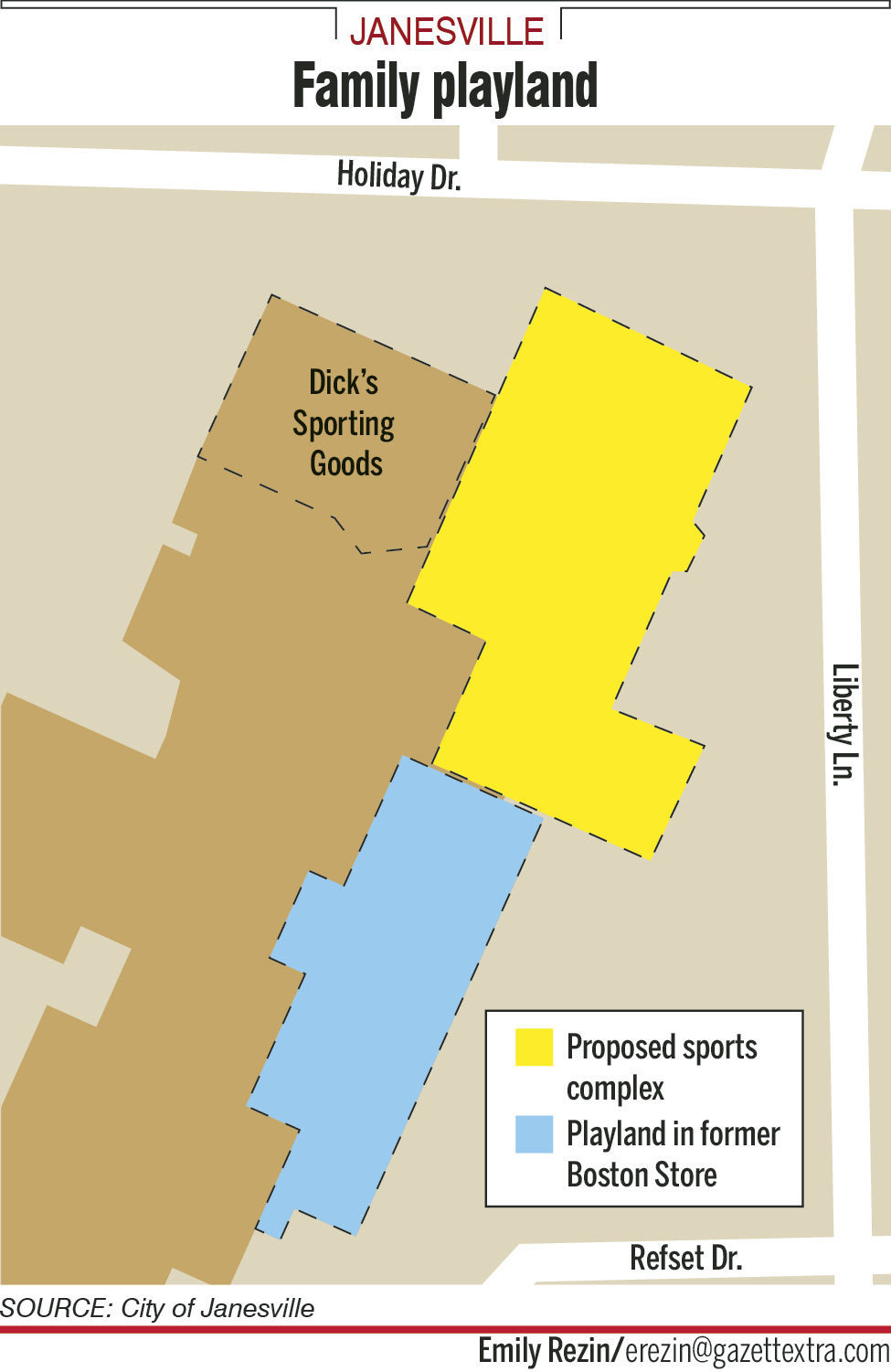 Picture people throwing axes, riding go-karts, hanging from walls and zipping on ropes above the floor of the former Boston Store at the Janesville Mall.

Can’t picture it? Well, try harder. All of that could be coming soon, a Janesville Mall official said.

The mall and its owner, RockStep Capital, have begun publicly discussing a bid to bring Hype Indoor Adventures, an indoor family entertainment and play center, to the 100,000-square-foot former Boston Store space.

Mall manager Julie Cubbage said RockStep and its owner, Andy Weiner, are working with the owners of Alabama-based Hype over converting spaces at two of its shopping malls—The Janesville Mall and The Bonita Lakes Mall in Meridian, Mississippi—into activity centers. They could include indoor climbing walls, zip lines, trampoline basketball, ax throwing, go-kart racing and other features.

RockStep hopes the project could pair with the city’s proposed indoor sports complex, which would go in a space JC Penney used to occupy.

The Hype plan would require investment by RockStep to retrofit the building for a specialized non-retail use. And while Cubbage said the mall could bring in Hype as early as 2020, Weiner wrote in an email that a “decision has not been made” whether RockStep’s commitment to locating Hype at the mall would hinge on the city approving an indoor youth sports complex at the mall.

RockStep believes an activity center such as Hype could increase family foot traffic at the mall at 2500 Milton Ave., Cubbage said.

Both projects would reactivate the empty, east side of the mall and in the case of the former Boston Store rekindle activity at the mall’s beleaguered center court—a retail space hit by the loss of both Boston Store and Sears.

“We want to show people what the proposed sports complex would look like and show where the proposed Hype would go. And I’m using the word ‘proposed’ because this hasn’t been finalized, yet,” Cubbage said. “The idea is to highlight our vacancies and let people know that we’re open to ideas, we’re working on this, and we want people in the community to approach us about space. This is a community project, and we want to be involved with the community.”

Cubbage said RockStep has created a subsidiary that would finance and handle projects with Hype. Any family entertainment centers Hype might build would likely later be bought by the RockStep subsidiary. The locations later could be sold to a separate owner or management company as quasi-franchises, Cubbage said.

Under the concept, the former Boston Store space would need retrofitting, including higher ceilings.

RockStep’s Meridian Mall would be the first to get a Hype. There, a former Sears store would be used, Cubbage said. That buildout might become a test site for what version of Hype could come to Janesville.

Cubbage said it’s not determined what business model Hype might use if it comes to Janesville, but she said it might use both membership and single-use pay models.

The mall has begun to pivot toward alternate uses of some vacant retail space. Recent examples include a Hedberg Public Library branch that opened this fall in a former clothing store and a video game arcade with games spanning several generations of video game history. Both those efforts, mall merchants and management say, are aimed at drawing families and a younger clientele.

“It’s the idea of bringing some excitement back to the mall, the idea of people here being excited over being here and excited about what’s here and what we’re adding to that,” Cubbage said.

That plan could go to the city council for consideration as early as November. The nonprofit Janesville Foundation is enlisting a New York consultant to look at the siting of an indoor sports complex and how its location might affect other commercial areas in the city.

That review, for which the Janesville Foundation paid $10,000, is expected to be completed later this month. The consultant would issue a memorandum with his findings to city planning administrative staff, likely a few weeks before the council begins considering the mall’s proposal to be the site of the indoor sports complex.

Cubbage said she and the leasing director for RockStep showed the consultant around the mall and laid out plans for proposed indoor sports complex and Hype plans.

Cubbage said she believes the consultant’s review seeks to determine whether an indoor sports complex at the mall would create a “bridge” between the mall and the Milton Avenue retail corridor and other commercial areas of the city, such as the downtown.

Agreeing Monday with votes by other committees, the Janesville Plan Commission decided the Janesville Mall would be the best place for the city to build a new indoor sports facility.