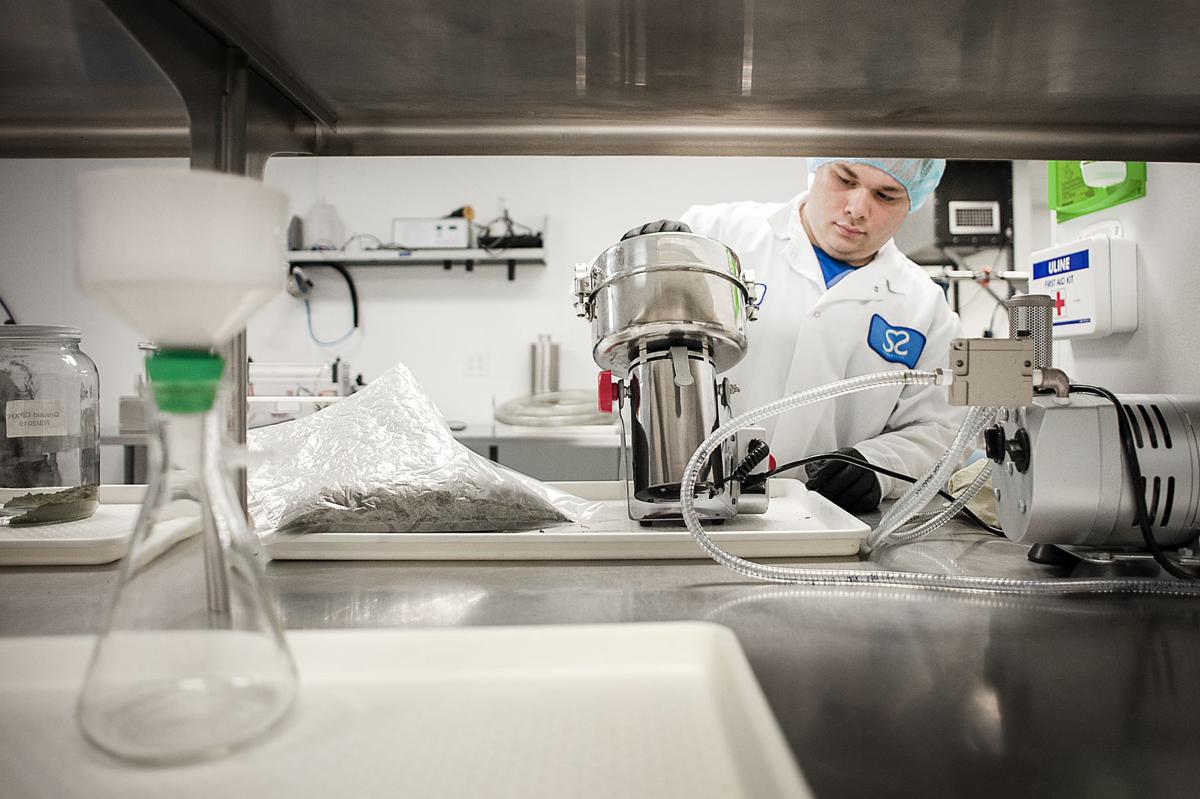 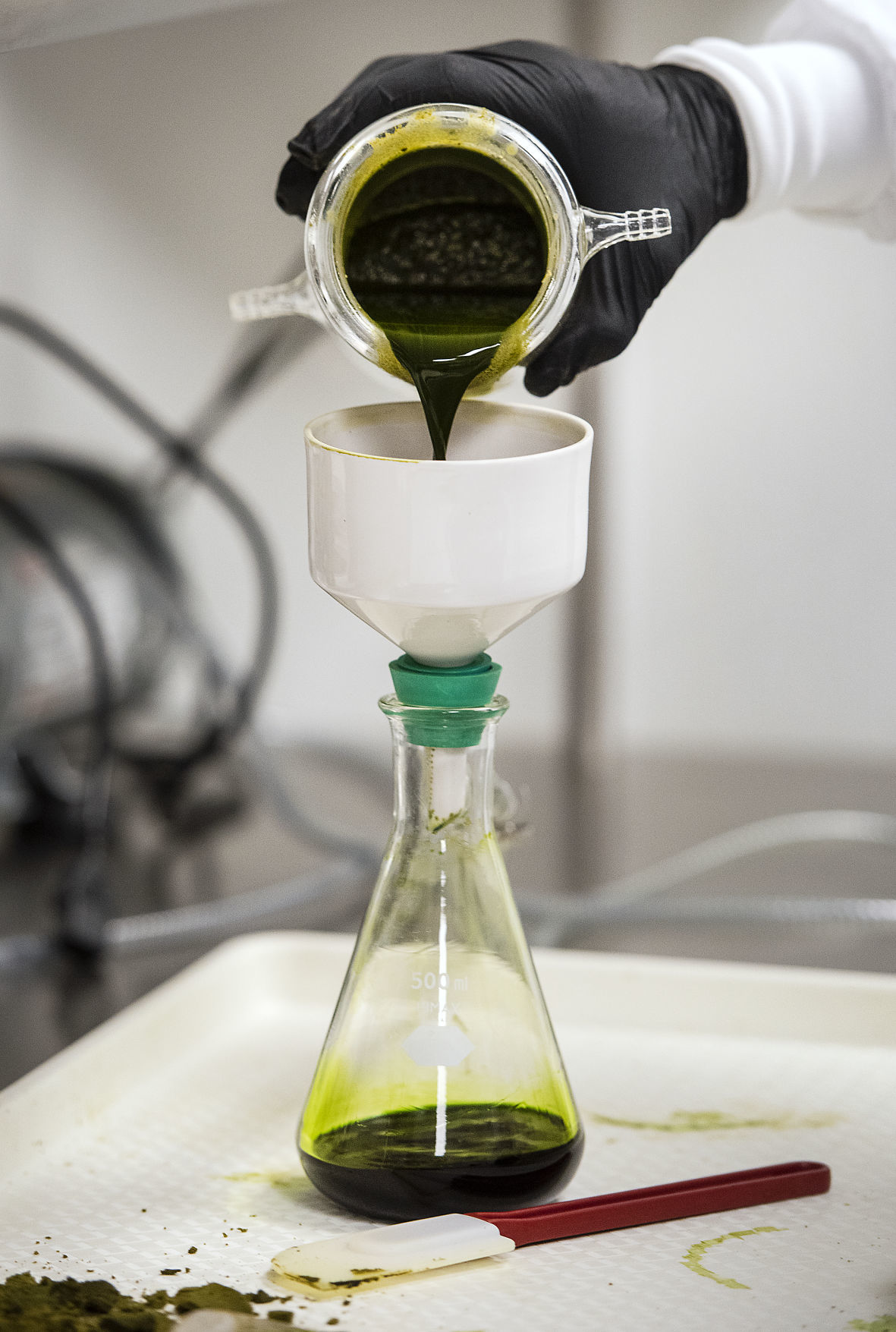 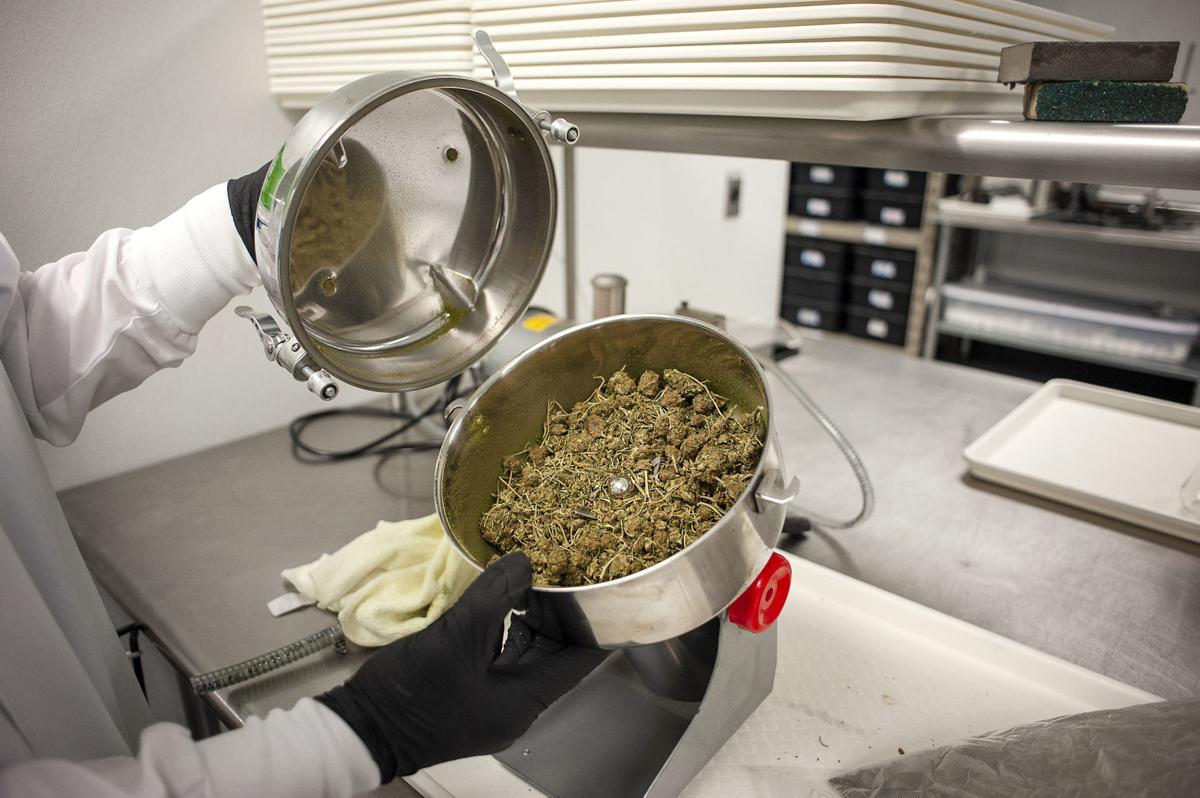 Hemp is loaded into a grinder at Simply Solutions at the Janesville Innovation Center. 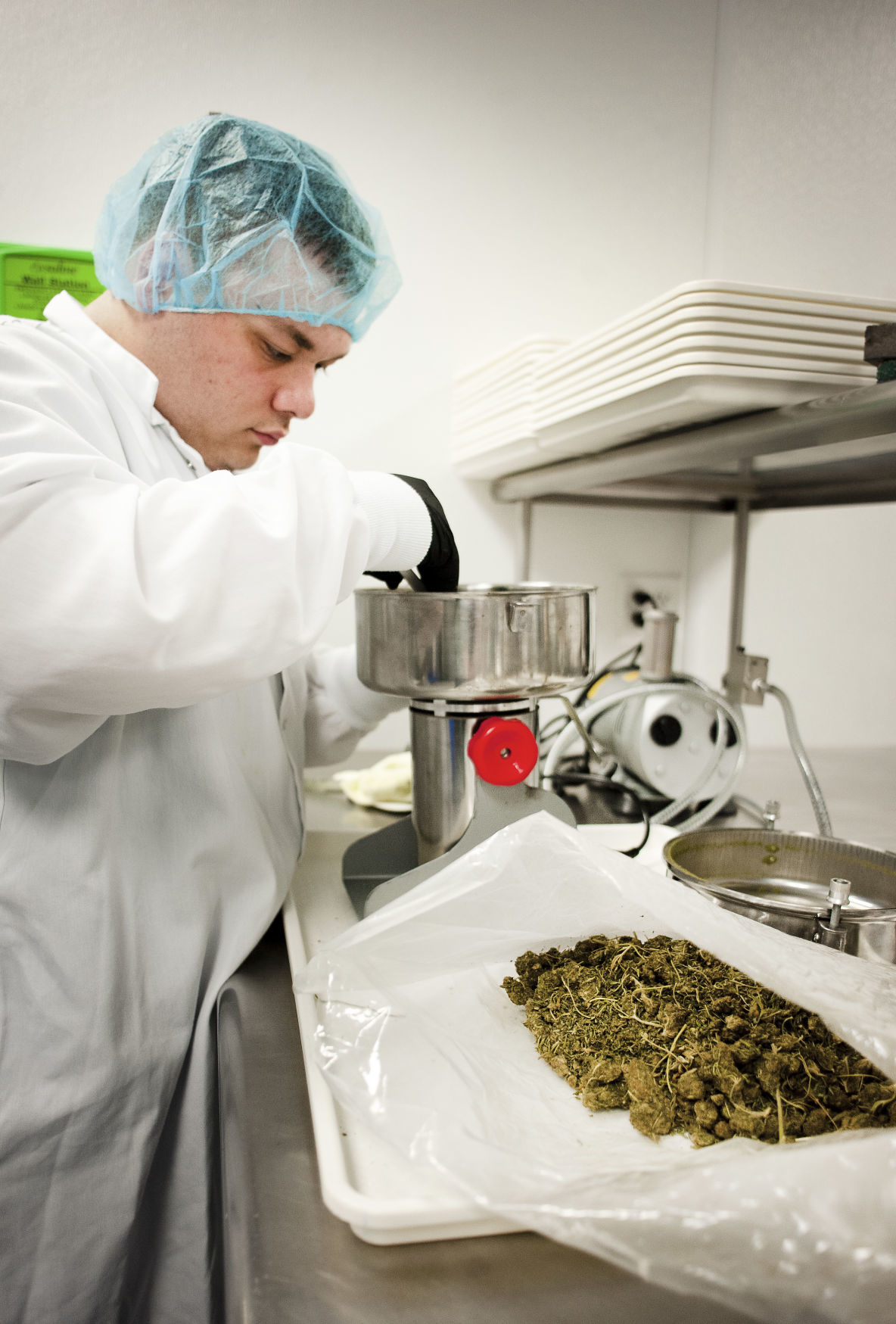 A Janesville company mostly known as a maker of all-natural lip balms and personal-care products could be moving into a new frontier in oil: hemp oil.

John Goepfert, a former gun shop operator but in more recent years the CEO of Simply Solutions, said his company has developed a process that extracts nearly 100% of the oil from hemp plants. The processes used by others extract much less, he said.

The company hopes to create what would likely be the first commercial-scale CBD processing facility in the region.

Goepfert says Simply Solutions, a homegrown company that produces all-natural personal care products, is in the final stages of raising private funding to secure a facility on Janesville’s south side. Within a few months, its dozen or so employees could begin processing hemp to extract cannabidiol, a substance more widely known as CBD.

Both hemp and CBD, the oil the plant produces, are now legal under state and federal regulations after decades of hemp being classified in the same class of controlled substances as marijuana and other cannabis plants. But unlike tetrahydrocannabinol, the mind-altering, high-inducing chemical that’s present in hemp’s cousin marijuana, hemp-based CBD oil is not intoxicating.

CBD can be processed and sold legally and is used for numerous medical conditions and in scores of personal-care products and consumer products, including CBD-infused foods and drinks.

Goepfert said his company plans to extract and process hemp into CBD oil tinctures—concentrated extracts—and sell it to wholesalers or retailers who market CBD oil and other CBD products.

CBD processing would be another leap for Simply Solutions, a company with subsidiaries that have grown and evolved over the past five years out of the Janesville Innovation Center.

Over the last two years, Simply Solutions has branched out from its cornerstone line of personal-care products, including “Lip Loob” brand lip balm. It recently has made serious inroads with a natural, nontoxic liquid Goepfert developed for use in fog machines.

Goepfert said the product, Simply Fog, now is used in training programs by more than a dozen major metro fire departments across the U.S.

The product is an alternative to fog machine liquids containing propylene glycol, a synthetic that’s used in antifreeze compounds.

If Simply Solutions moves forward with its CBD plan, it would operate what the company’s COO, Mark Schweiger, said would likely be the first major, commercial-scale CBD processing facility in the region.

Goepfert and Simply Solutions facility manager Patrick Knilans said the company plans to buy hemp for processing from about a dozen area farmers.

Simply Solutions has a state license to handle hemp and an FDA-approved process it already has used to produce tinctures from other plant materials, such as willow bark and clove.

Goepfert’s foray into CBD production would come at a time when a few thousand people in Wisconsin have applied to grow and process hemp for CBD oil and other products. Many of the growers, according to the state Department of Agriculture, Trade and Consumer Protection records, would qualify as cottage industry farming operations that grow hemp in greenhouses or on plots of 1 acre or less.

Goepfert said his company would use its own science and proprietary extraction processes to create a regional link between local agriculture and a national market for hemp that analysts say already was an $800 million industry in 2017—the year when hemp farming became legal under Wisconsin’s industrial hemp bill.

The market continues to grow.

While the bubble of those seeking to grow hemp continues to expand, there’s a lack of commercialized CBD processors—at least in Wisconsin. That could create a bottleneck between hemp farmers and those who market and sell CBD products.

Goepfert said it’s a good time for his company to become a middleman in a blossoming industry.

He believes CBD oil production could give Simply Solutions a revenue stream to fuel product development in the company’s other divisions. CBD production has proven to be among Simply Solutions’ biggest home runs with some potential investors, he said.

“I’m not a hemp disciple,” Goepfert said. “But when you walk into fields where local farmers are now growing hemp, it’s really hard not to realize the excitement and the promise of this plant.”

In a small laboratory at Simply Solution’s headquarters at the Janesville Innovation Center, employees used a stone grinder to pulverize nuggets of hemp as Knilans looked on in a lab coat and hairnet.

The dark green hemp looked similar to its mind-altering cannabis cousin, marijuana. Like pot, it smelled pungent, green and piney. But otherwise, Knilans said, the hemp strains Simply Solutions is supplied are tested by government regulators to be free of all but trace amounts of intoxicating THC.

Workers moved the ground hemp into containers to steep in ethanol and draw out the oils.

Under a proprietary process using no chemicals and very little heat (Goepfert calls the method “just physics and energy”), a small machine extracted CBD from the mixture, creating a base for a tincture. Workers later would filter out the ethanol and other plant chemicals, such as chlorophyll, which colors plants green.

Simply Solutions claims their extraction process is a cleaner and more efficient way to extract more CBD from hemp. Goepfert, Schweiger and Knilans said third-party testing has shown the company’s methods extract nearly 100% of CBD from hemp it processes.

Methods other producers use extract only 60% to 70% of the CBD, they said.

That’s important, considering that some strains of hemp grown for CBD can net $2,500 to $75,000 an acre, according to New Frontier Data, a cannabis industry analyst.

“A good way to look at it is that other producers have been leaving 30 or 40% of gold in the ground. We know through testing that we’re mining out all the gold possible,” Knilans said.

Knilans said his company’s CBD project started at the behest of a grower who asked if Simply Solutions subsidiary Premium Tinctures could extract hemp oil. The company and its subsidiaries are now working out supply deals with local and out-of-state farmers, including one grower who cultivates and grows 6,000 acres of hemp.

Gale Price, the city of Janesville’s economic development director, said as far as he knows, Simply Solutions is the first in Janesville—if not the entire region—to float plans for a commercial CBD processing facility.

Price said he believes that despite regulatory uncertainty, Janesville or Rock County might eventually see more than one CBD producer take root.

He said some startups might not find it easy to get into the hemp processing business, particularly if federal or state laws on hemp shift. It’s probably more feasible for a company such as Simply Solutions, which has established other product lines and revenue streams, to pivot into CBD, Price said.

Goepfert said CBD startups face challenges in landing traditional business loans, in part because federal loan regulators still have hemp on the books as being akin to marijuana farming, even though pot and hemp have dramatically different chemical compositions.

Even in states where growing, selling and consuming pot is legal, the marijuana industry still is perceived by lending regulators as an activity that can be tied to money laundering. By proxy, that can make banks skittish toward hemp, Goepfert said.

In Wisconsin, a hemp-farming pilot program is just a year old. Some growers are still learning, and there isn’t yet a regulatory framework to ensure purity of CBD sold by end retailers, said Jeff Van Dam, a Milwaukee-area insurance agent.

Van Dam said he has begun offering insurance policies to CBD retailers and hemp farmers, but most of the deals are brokered through subsidiary insurance companies that Van Dam said are involved in higher-risk, “Lloyd’s of London-type situations.”

It hasn’t helped hemp’s case that some Wisconsin media outlets have found through independent testing that some retail products advertised to contain CBD actually have none, Van Dam said.

“That really bothers the people out there who want to do things legitimately. It’s a black eye. In that way, it still is sort of a ‘wild West’ type of thing,” he said.

Knilans and Schweiger said they’re aware they’re stepping into a new frontier. They hope to do so under the umbrella of science and processes their company has worked hard to develop.

“People who come in here to visit are surprised to see us in lab coats. In other parts of the state, CBD is an industry that can tend to be run by guys walking around in sandals and board shorts,” Knilans said. “We’re pretty excited to be a company that could change that.”

Village of Fontana board members could limit the sale of CBD products in a move championed by the village's police chief.