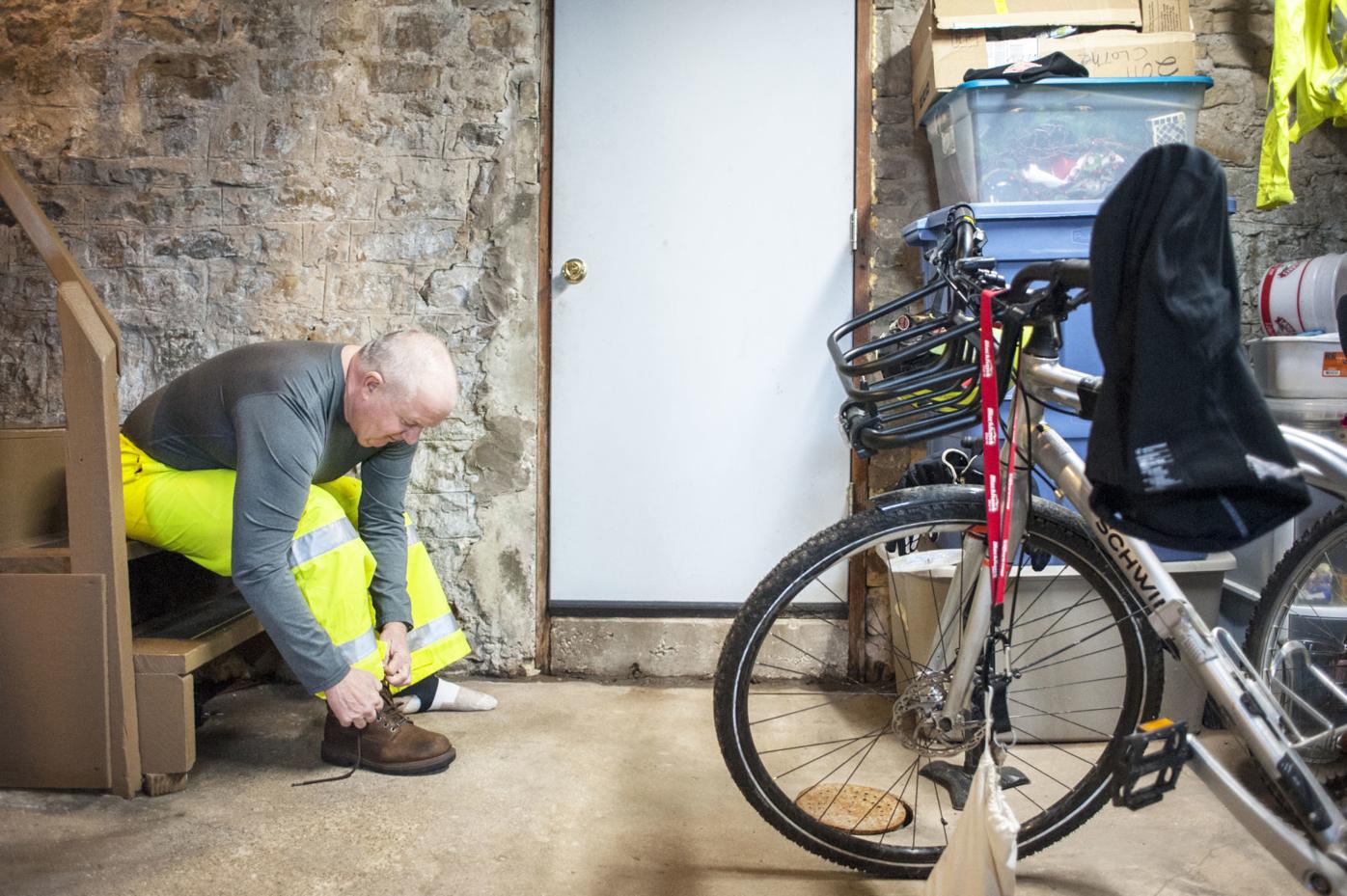 Paul Murphy, president of the Janesville Velo Club, puts on his boots before a bike ride at his Janesville home. 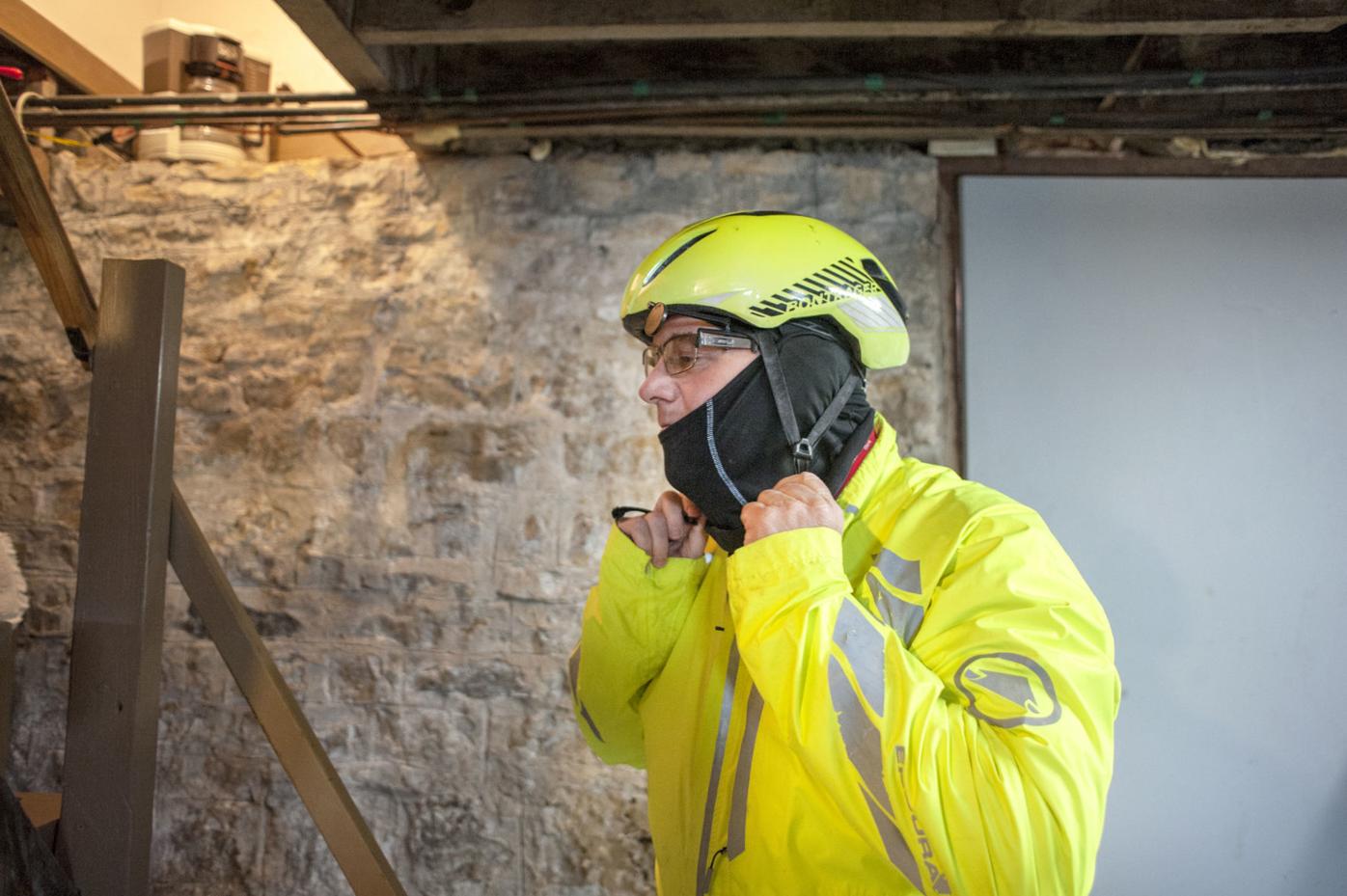 Paul Murphy dons bright, reflective clothing at his Janesville home before his bike ride Wednesday. Murphy, president of the Janesville Velo Club, supports the city’s efforts to earn recognition as a bicycle-friendly community. 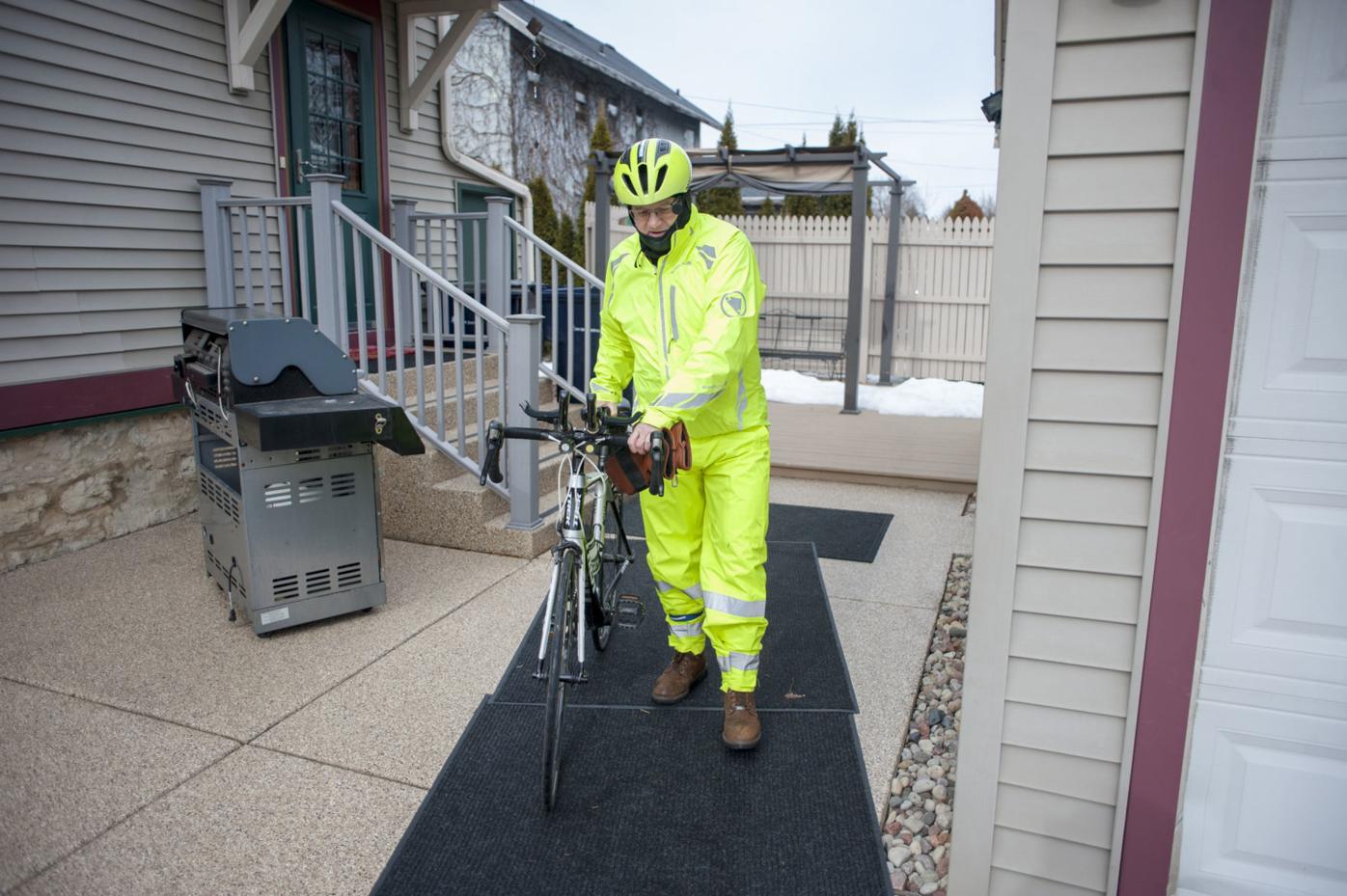 Dressed in reflective gear and thermal clothing, Paul Murphy walks his bicycle outside Wednesday at his home in Janesville. 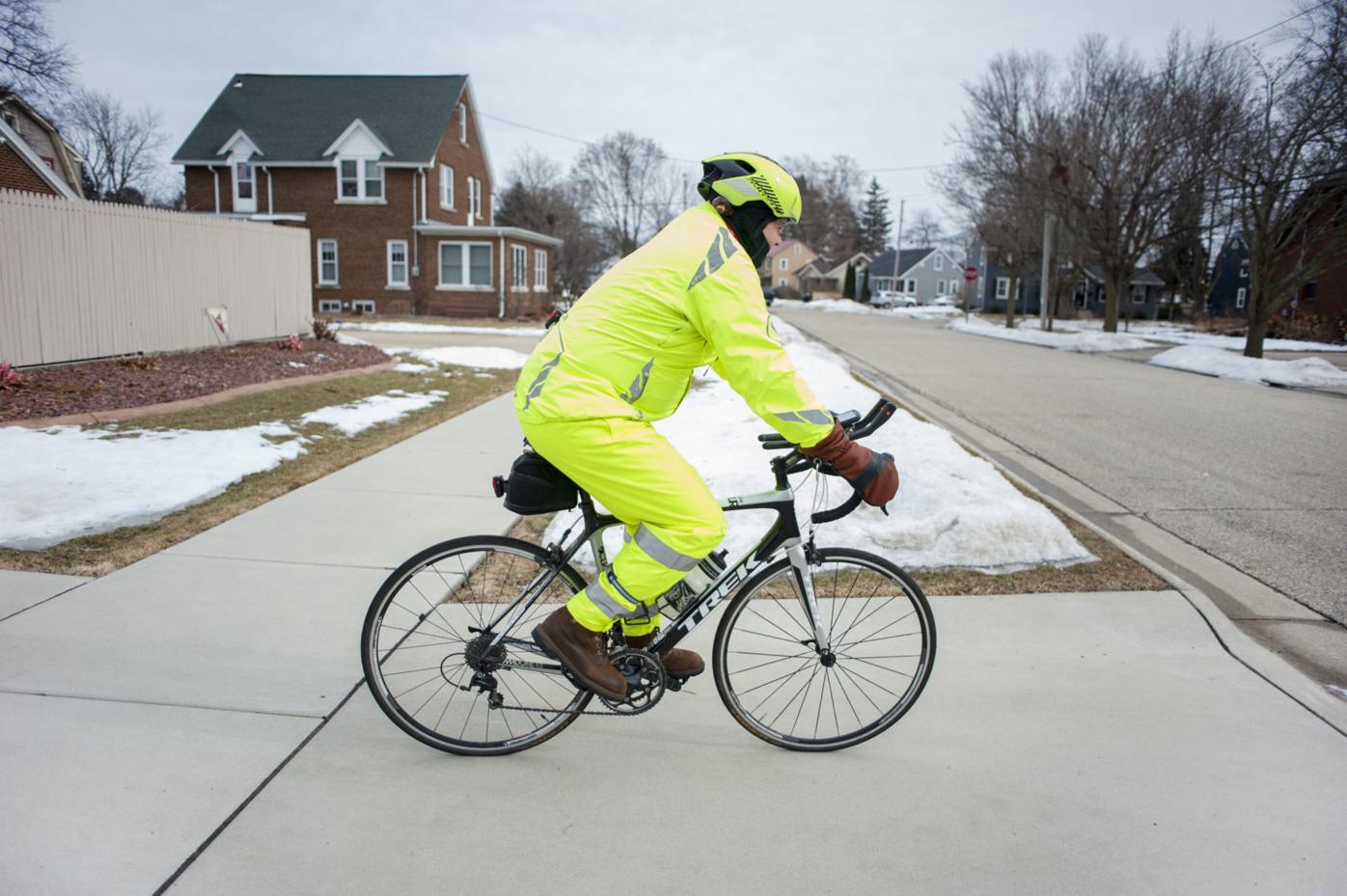 Despite the snow on the ground and cold weather, Paul Murphy hops on his bike for a ride last week in his Janesville neighborhood. Murphy, president of the Janesville Velo Club, supports the city’s efforts to earn recognition as a bicycle-friendly community. 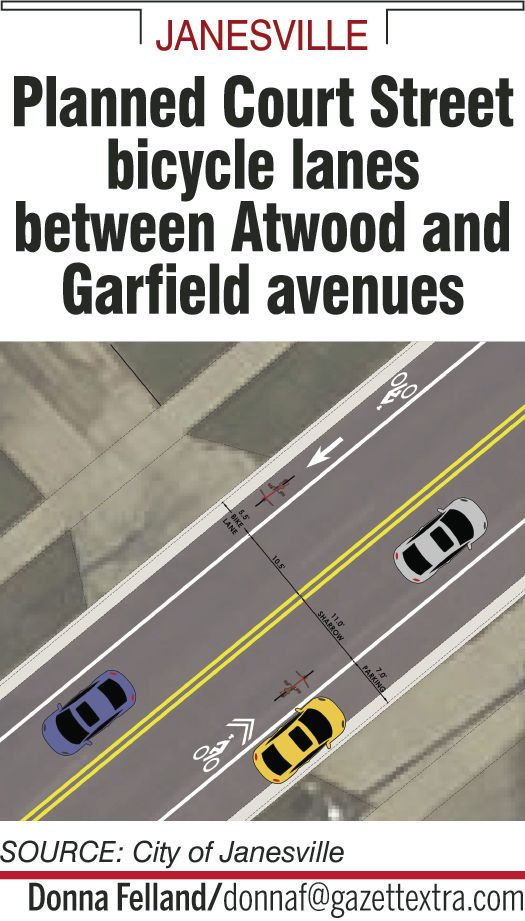 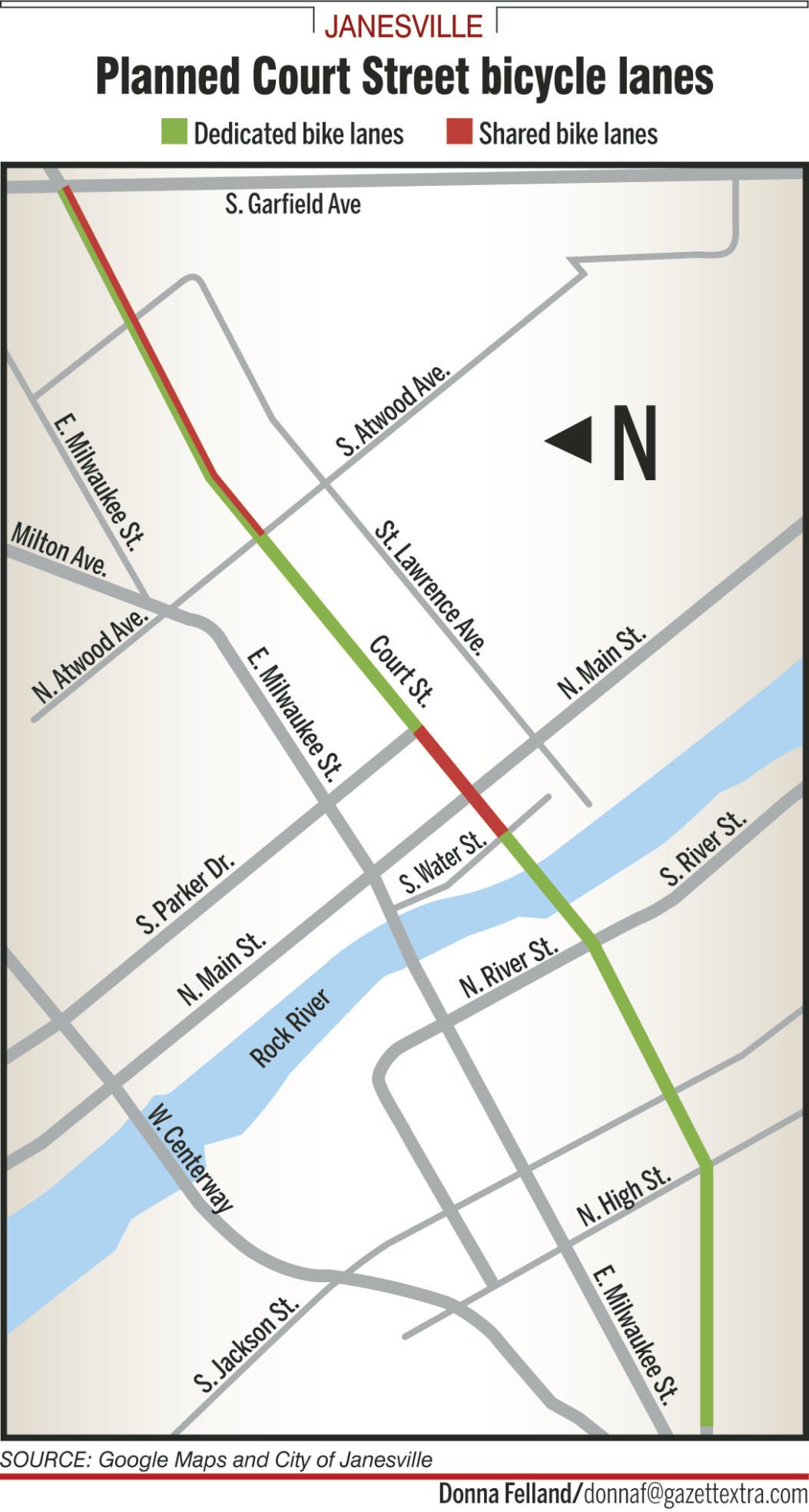 Paul Murphy, president of the Janesville Velo Club, puts on his boots before a bike ride at his Janesville home.

Paul Murphy dons bright, reflective clothing at his Janesville home before his bike ride Wednesday. Murphy, president of the Janesville Velo Club, supports the city’s efforts to earn recognition as a bicycle-friendly community.

Dressed in reflective gear and thermal clothing, Paul Murphy walks his bicycle outside Wednesday at his home in Janesville.

Despite the snow on the ground and cold weather, Paul Murphy hops on his bike for a ride last week in his Janesville neighborhood. Murphy, president of the Janesville Velo Club, supports the city’s efforts to earn recognition as a bicycle-friendly community.

Since the 1800s, Janesville has been a city that values two-wheeled travel.

Today, about two centuries later, the city is rolling on its goal of becoming a more bike-friendly community and completing bike corridors that connect the east and west sides, said Terry Nolan, coordinator of the Janesville Area Metropolitan Planning Organization.

Cycling has been in the news in several ways recently.

The city recently honored two local businesses for being bicycle friendly as part of its effort to be recognized as a bicycle-friendly community by the League of American Bicyclists.

Bike lanes were included in city plans to convert Court Street from a one-way to a two-way road later this year.

The city recently applied for grants that will connect off-road trails for cyclists and pedestrians.

And for the first time, Janesville will be one of 11 Midwestern cities that will host a summer criterium race featuring hundreds of cyclists.

Murphy and Nolan said the efforts are part of Janesville’s goal to boost its quality of life.

Laying out the welcome mat

For years, Janesville staff has talked about becoming an official bicycle-friendly community.

This year, the city took the leap and applied.

The League of American Bicyclists’ application is about 140 pages long, covering everything from infrastructure, enforcement, education, plans, how the city measures progress and more.

The league will review Janesville’s application, conduct interviews and eventually rank it, showing what the city is doing right when it comes to cycling and how it can improve, Murphy said.

As part of the application process, the league suggested Janesville recognize local businesses for welcoming cyclists. Working with cycling advocates, including Murphy, the city created and distributed bicycle-friendly business awards.

The hospital sponsors the Janesville Velo Club’s Go Slow bike ride and provided a $5,000 mini grant to the Rock Trail Coalition to develop a Rock County trail map. It also installed a trail across from its property and a bicycle rack near its emergency room entrance, according to a news release.

Flippin’ Frog, part of It’s a Keeper Bait & Tackle, is perhaps the only business on the Ice Age Trail that serves refreshments, such as ice cream and drinks. The business also raised money for a park pavilion just off the trail near the Monterey Dam, provides free use of an air pump and other tools, and has convenient bike parking, according to the release.

“People must appreciate the fact that we try to take care of everybody in the outdoors, including the cyclists,” said Shawn McCarten, owner of It’s a Keeper. “We take a lot of pride in that area—a lot.”

“It’s a great thing to have for the city. It brings more people in, and we’re proud to be part of that recognition,” McCarten said.

When Court Street is converted to two-way this year, bike lanes will be included between Linn Street and Garfield Avenue. In segments where dedicated bike lanes won’t fit, road signs will indicate that cyclists share travel lanes with motorists, city officials have said.

The segment of Milwaukee Street that runs through downtown will be redone in 2020. It does not have enough room for bike lanes, so they will have to be limited to Court Street, officials have said.

Murphy said he knows the city can’t wave a magic wand and have bike lanes appear wherever they’re desired.

Including bike lanes in a street project adds cost for road paint and signs, but the overall expense is minimal, Nolan said.

The city’s 30 miles of paved bike trails are a rare commodity for a community of Janesville’s size, and the city recognizes the trails’ value, Nolan said.

“It’s really been a great benefit, and I think a lot of people outside the city envy Janesville for being able to have something like this,” Murphy said.

Early this year, the city applied for two grants to extend and connect paved trails. It will be a while before the city learns if it will get the grants—which could be worth hundreds of thousands of dollars—and even longer before the work is completed, but the city is working to fix the trails’ weak points.

One area is on the north side of town. A 1-mile gap exists in the Ice Age Trail between the Highway 26 overpass near BMO Harris Bank and Janesville Animal Medical Center to the northeast.

Connecting the trails would allow pedestrians to more easily travel between Janesville, Milton and beyond.

The city also applied for a grant for a trail on the west side. That project involves paving a path through the greenbelt to connect the Robert O. Cook Memorial Arboretum with Rockport Park to the south.

The velo club, Rock Trail Coalition and others have cut and maintained close to 12 miles of off-road trails near Rockport Park.

Murphy said connecting that area to other parts of the city would be a boon for both cyclists and pedestrians.

Residents who attended a city forum to learn about plans to convert Court Street into a two-way road seemed most excited not for two-way traffic but additional bike lanes.