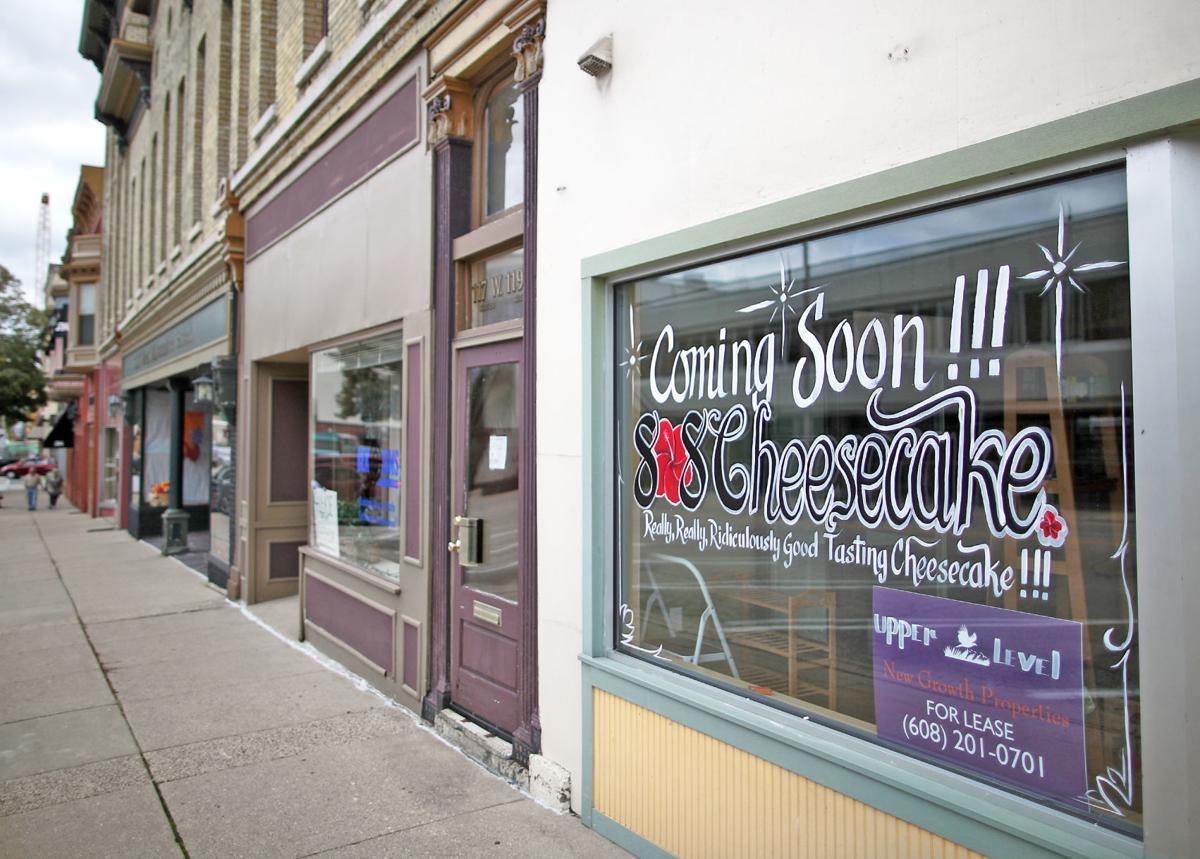 Soon a vacant, former catering shop storefront along West Milwaukee Street will be the new home to a specialty cheesecake shop in downtown Janesville. The change comes in a continued ebb and flow of vacancies downtown. A city vacancy report noted that first-floor, storefront vacancies in the city’s downtown have seen a small uptick over the past year, despite revitalization that is occurring along the riverfront. 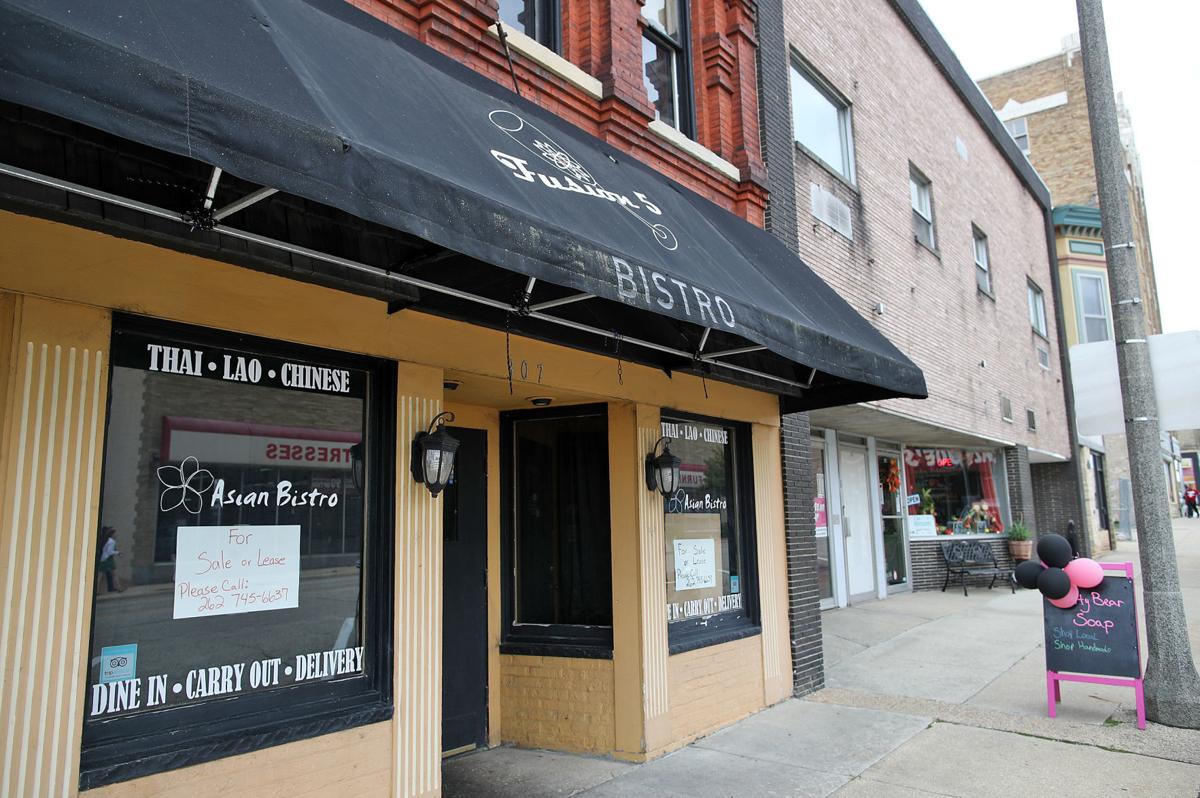 Along West Milwaukee Street the Asian Bistro restaurant recently has closed, but two storefronts next door opened with new businesses, one a specialty soap retail shop and the other a health food shop. The change comes in a continued ebb and flow of vacancies downtown. A city vacancy report noted that first-floor, storefront vacancies in the city’s downtown have seen a small uptick over the past year, despite revitalization that is occurring along the riverfront. 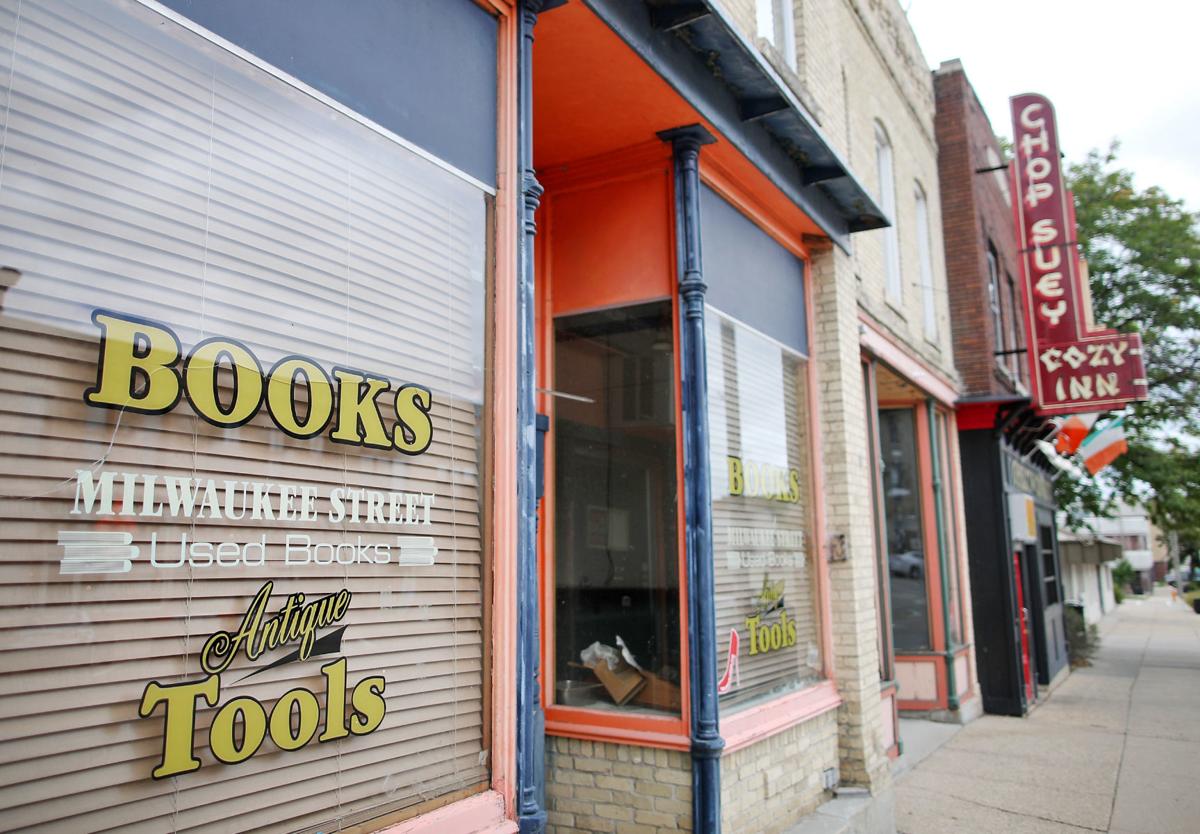 This West Milwaukee Street storefront, the former home of a used book shop, has remained vacant for several years in downtown Janesville. That comes amid a continued ebb and flow of vacancies downtown. A city vacancy report noted that first-floor, storefront vacancies in the city’s downtown have seen a small uptick over the past year, despite revitalization that is occurring along the riverfront. 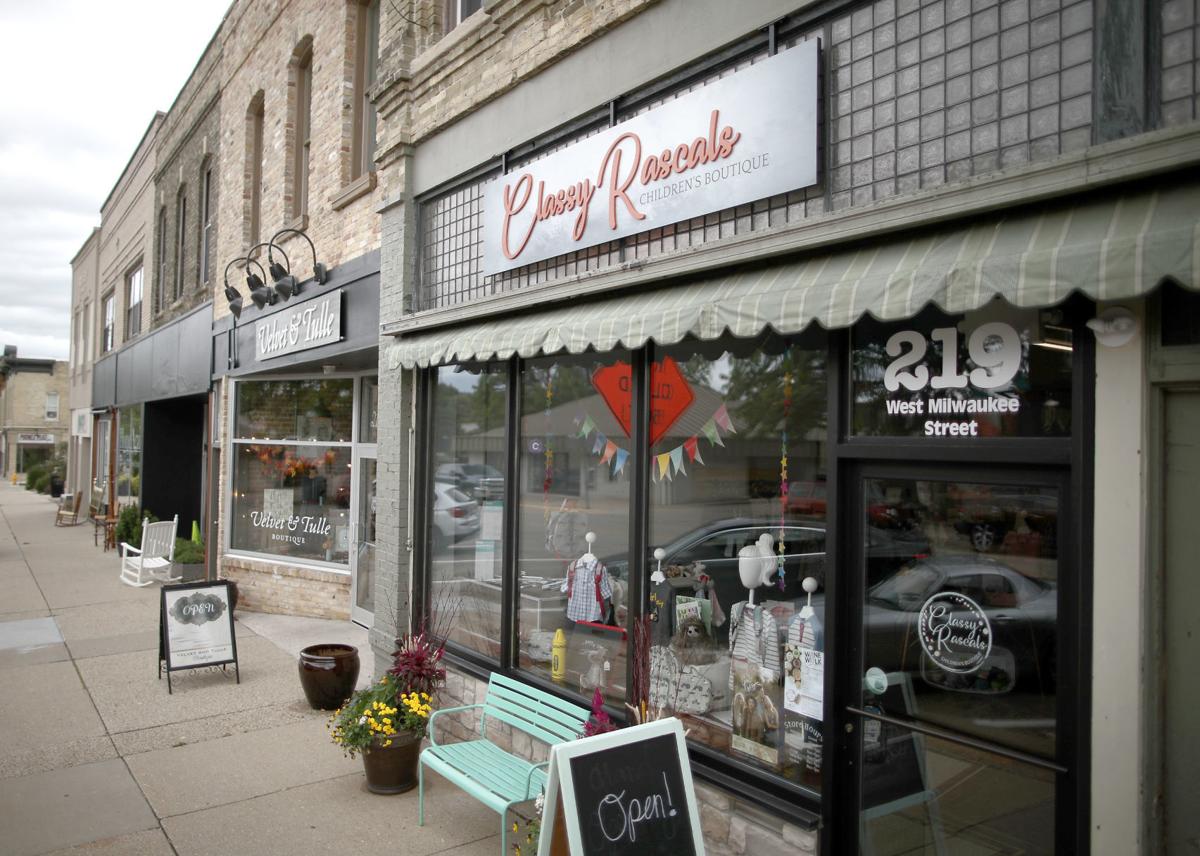 As Janesville’s downtown continues an era of revitalization along the riverfront, some areas in the core of downtown are seeing spaces fill up with developments and new restaurants and retail shops.

Yet despite continued, big-ticket public and private investment in the city’s ARISE riverfront revitalization strategy, the revival hasn’t brought an overall decrease to vacancies in some stretches of the downtown’s west side—at least not yet.

In fact, according to a June 2019 snapshot inventory collected by the city of Janesville’s economic development office the vacancy rate for first-floor, downtown storefronts actually increased over the past year from about 19% to about 20.5%.

That’s not a big uptick, and the vacancy tally reflects data gathering that rolled out on an isolated set of days earlier this year. It doesn’t reflect more recent changes in vacancy, such as new businesses that have moved in during recent weeks, businesses moving from one downtown location to another, or smaller-scale storefronts that are under renovation (or slated for demolition), yet remain unoccupied.

In a brief rundown of the vacancy rates at a city council meeting last week, City Manager Mark Freitag said there are hopeful signs but acknowledged that dark storefronts in the city’s downtown are “trending, frankly, in the wrong direction.”

That’s given the fact that the historically most under-occupied stretches of downtown—the blocks of West Milwaukee Street west of North Franklin Street--have seen multiple properties change ownership and change focus toward niche and boutique retail and services.

At least one retrofit of storefronts for upper-floor apartments is underway on the far west end of West Milwaukee Street, while Freitag accurately summed up last week that “at least four” new businesses have moved in along the same spur in the weeks since city interns collected the survey.

“Part of the timing of when we did the survey was we started at the beginning of summer. Over the course of the summer, these (vacant) spaces have begun to fill up. So it’s part of the ebb and flow of people starting up businesses and finding their way to a business plan that makes sense and works,” Price said.

Northern Chic Boutique has occupied leased space at 111 W. Milwaukee St. since May. It is the newest business to take root in renovated space in a storefront that in recent years has been something of revolving door. Over the past half-decade, the space has housed a toy shop selling vintage 1970s and 1980s toys and, more recently, a fantasy game and collectibles shop.

Northern Chic, which offers modern women’s fashion, set up shop in the weeks leading up to the initial, planned completion of the Milwaukee Street bridge early this summer. The bridge project has faced months of delays linked to weather and logistical problems, and the bridge remains under construction and closed. It likely won’t reopen to traffic until late October, the contractor has said.

What was a planned, eight- or nine-month bridge closure has morphed into a yearlong disruption to traffic, and it has left some West Milwaukee Street businesses near the bridge marooned for months on the wrong side of construction detours.

Stephanie Hernandez, an employee at Northern Chic, said the protracted bridge closure has put a strain on the new fashion shop, which is just a few blocks west of the river.

Yet, Hernandez said she thinks it’s ironic that the city found an uptick in downtown vacancy this summer. In the past several weeks, she has watched five or six new businesses open or get ready to open in storefronts along West Milwaukee Street.

Meanwhile, across the street, the brand-new, 53-room Cobblestone Hotel just opened. And an enclave of new merchants along West Milwaukee Street, including those who run a specialty soap shop and a soon-to-open cheesecake shop, have begun sharing ideas on drawing in foot traffic and optimizing store hours.

She said for some merchants it feels like a holding pattern until the bridge reopens later this fall, yet she feels optimism for what is to come.

“Hopefully, that bridge opens soon. Because then we can get the traffic back going on this road. Right now it's just so still. But yet there are so many new places popping up," Hernandez said. "Other store owners that have come and popped in down here and asked us, 'How are you doing? We're new, too.' I feel like it's filling up. So it's weird that vacancy is climbing. It doesn’t seem like it.”

Price said that downtown Janesville has broad boundaries, and many new storefront vacancies are spread around the blocks north and south of downtown's core. Some large-scale vacancies that linger, along with a few larger new vacancies, such as the shuttering for a time of a gas station at the Five Points, an intersection on the far west end of downtown.

One storefront, a newly defunct, former locksmith shop just north of the Janesville police station, was rolled into the city’s vacancy survey. The shop is on land that is part of a possible redevelopment site for a 90-unit apartment complex.

If the shop is cleared and removed, it would come off the books as “vacant” space. That’s a difficult transition to convey in raw vacancy data, Price indicated.

Price added that some upstairs businesses along West Milwaukee Street are considering moving their spaces to underused, street-level parts of their properties. Upstairs units where businesses now operate could become retrofitted for market-rate apartments.

That would eliminate street-level vacancies while offering additional revenue streams for owners and could spur improvements to the properties and the businesses in them.

Price said he believes such plans wouldn’t be on the table without a sense that there is momentum building downtown.

Hernandez, too, said she looks at the turnaround downtown as a work in progress.

“I remember as a kid, it was the mall. You went to the Janesville mall and downtown was a desolate wasteland. That’s changing. They’ve really cleaned things up. It’s looking really nice. I love what they did at the square there with the fountains and stuff, the outside gym across the way,” Hernandez said. “You’d be surprised to see that kind of thing in downtown Janesville if you haven’t been here in a while. I feel like there’s potential here."