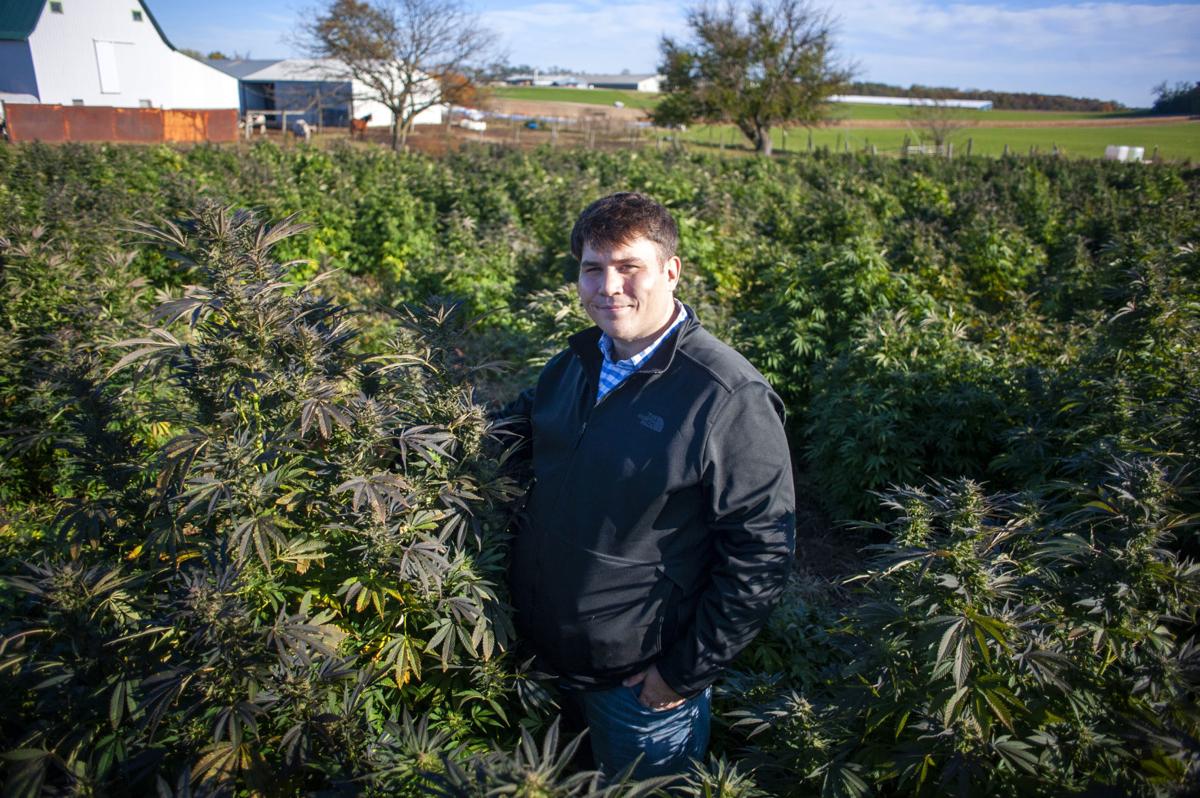 Jonathan Baker, owner of TFP Sciences, stands in a field of hemp in rural Whitewater. 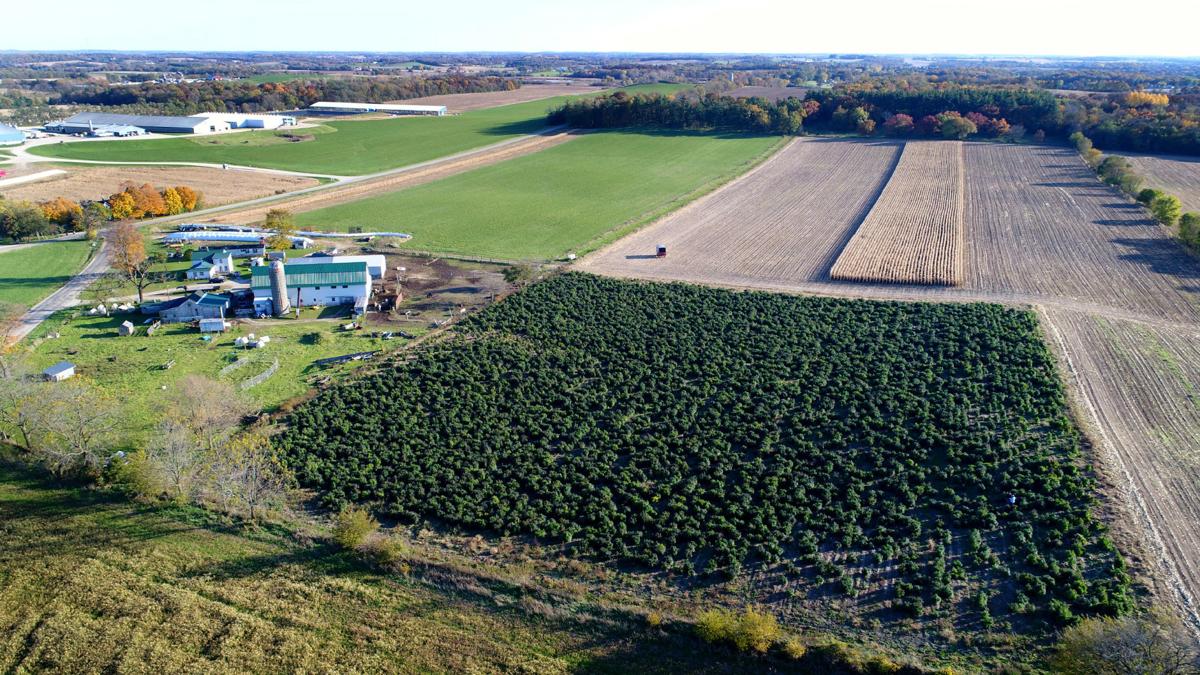 Five acres of hemp that belong to Jonathan Baker grow in rural Whitewater. 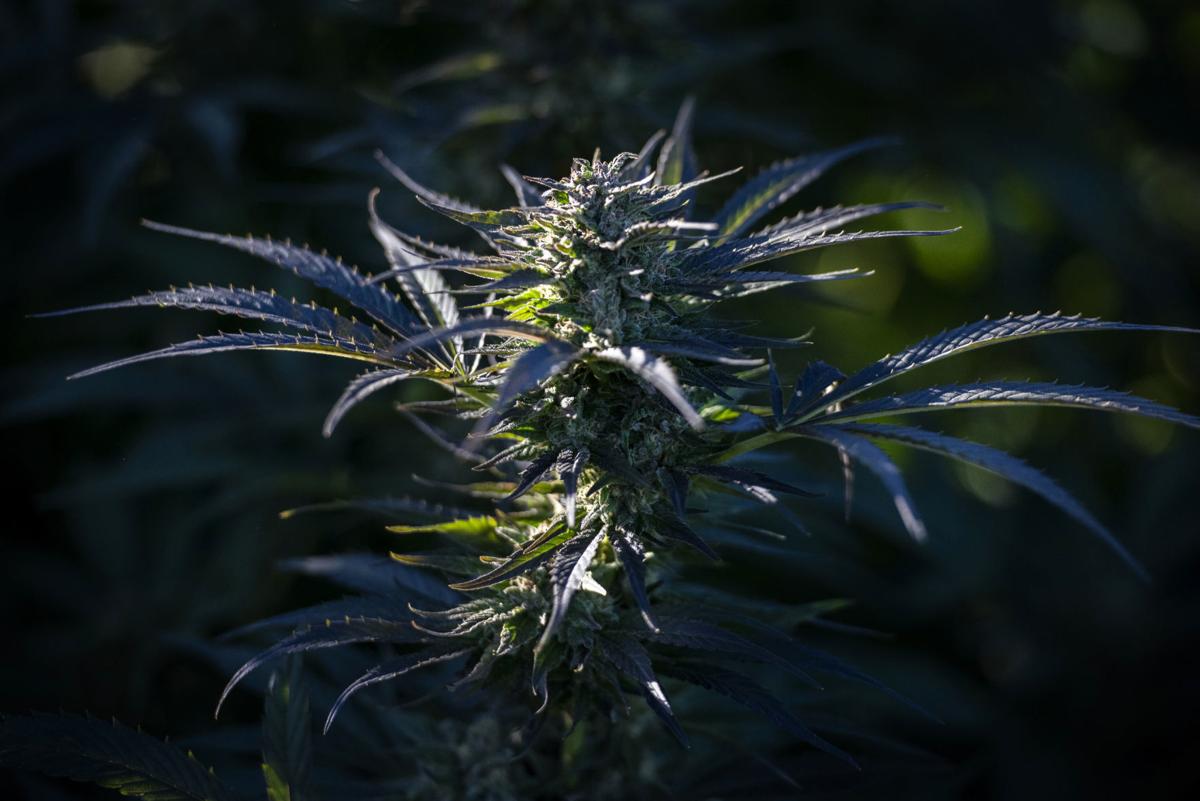 Sunlight shines on a cannabis plant. Jonathan Baker, owner of TFP Sciences, has 5 acres of the crop in rural Whitewater. 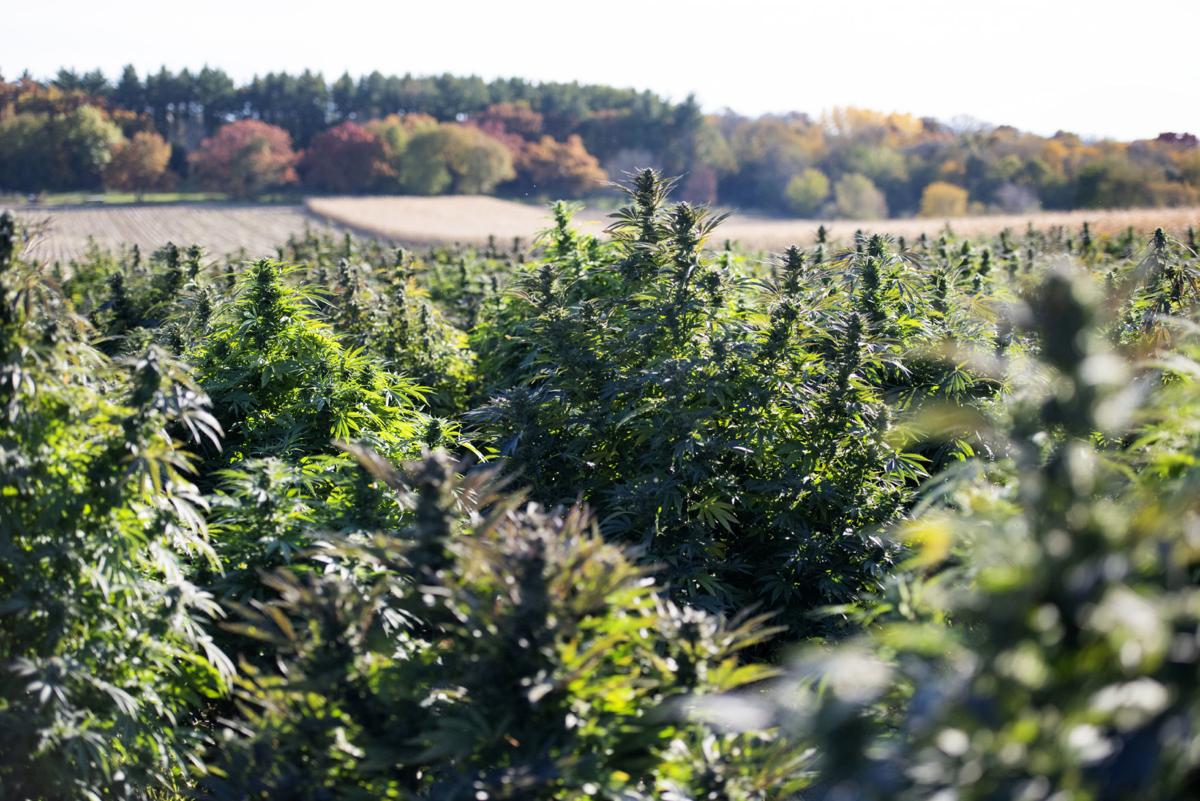 Cannabis plants grow in a hemp farm in rural Whitewater. 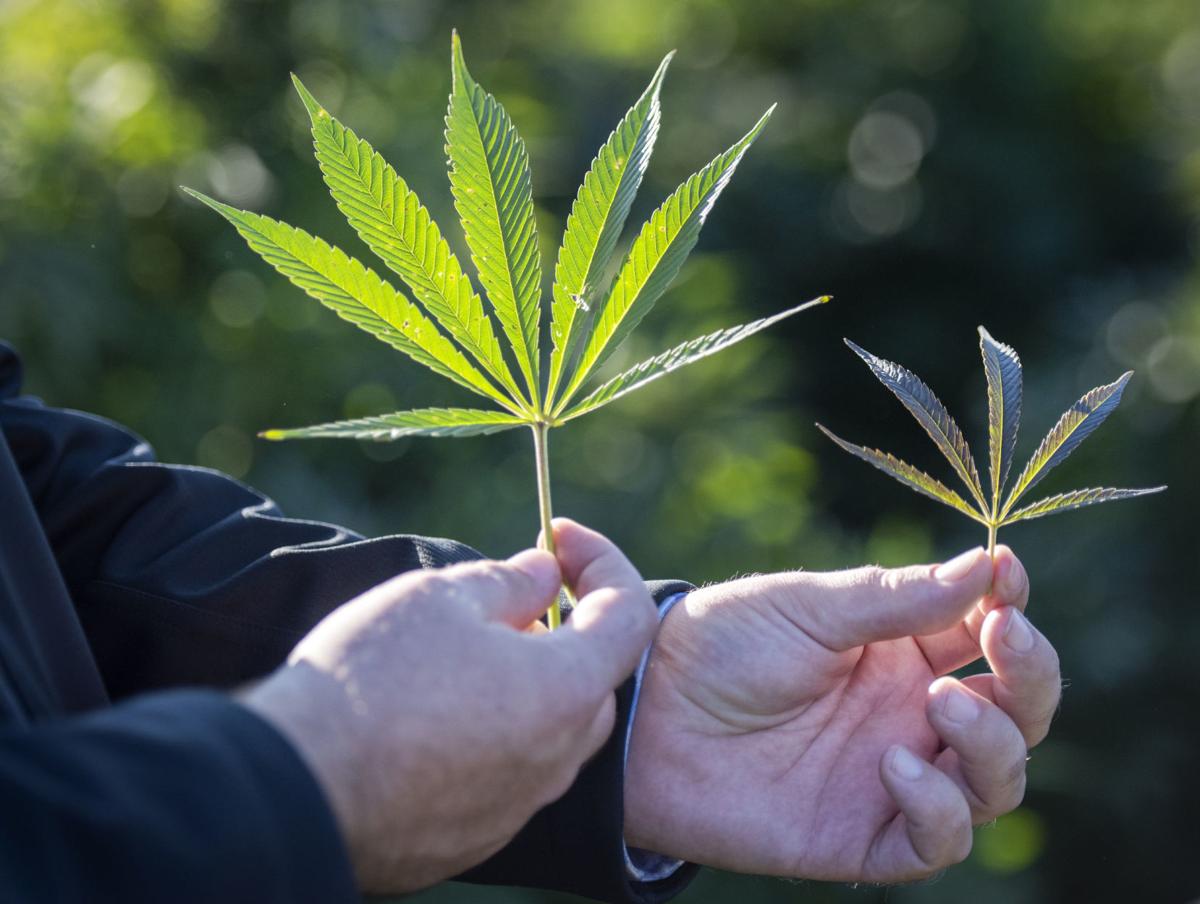 Jonathan Baker, owner of TFP Sciences, holds up cannabis leaves to point out the varied hemp crops he grows in rural Whitewater. 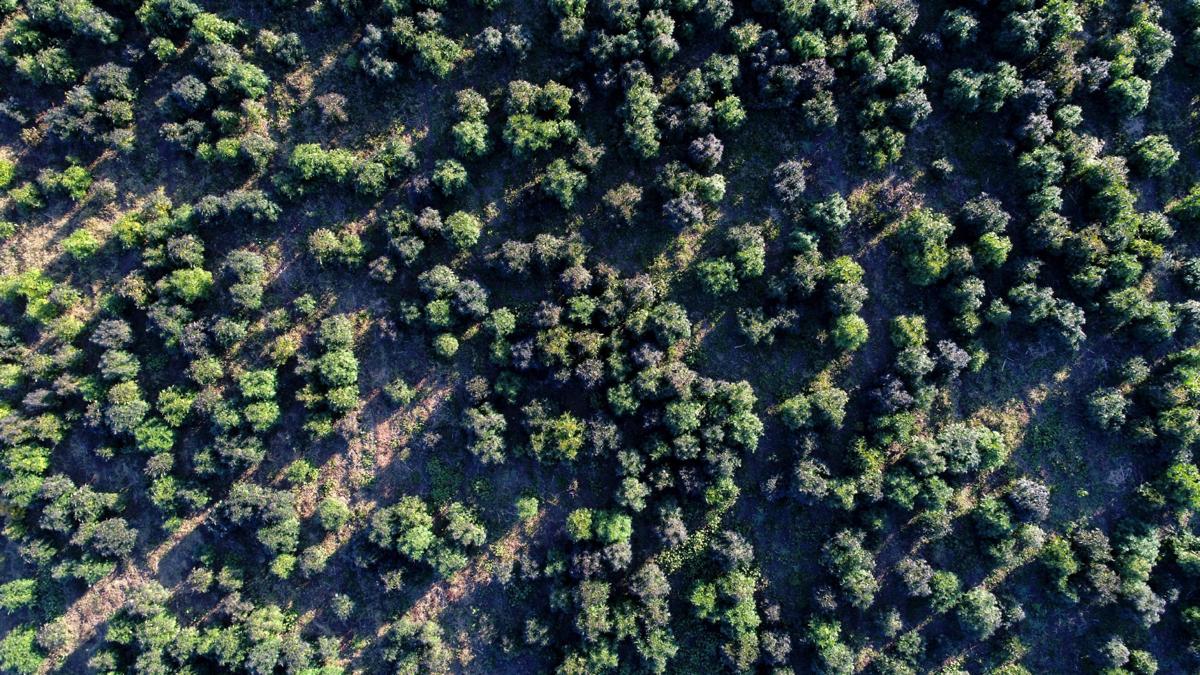 You’d think Jonathan Baker would have been California dreaming on a late October day.

After all, several acres of Baker’s hemp crop on a rural Whitewater hillside were in limbo. Baker was awaiting testing to learn whether a late October snowfall had damaged or destroyed hemp still in a field just east of the Koshkonong hills.

Baker, 29, moved back to Fort Atkinson this year after spending a decade in northern California, where he’d built a life as a cannabis activist and small-scale grower of legal cannabis strains for therapeutic use.

Last week, Baker’s hemp near Whitewater was harvest ready. Then came the first breath of Wisconsin winter, about a month earlier than usual.

Late in the week, Baker watched out his window as white flakes fell. He and his partners had been spending 14-hour days frantically harvesting and hanging his hemp crop, about one-third of which he said got partially frozen and covered by snow. Within days, Baker said, he’d learn if the snow-bitten hemp will be suitable for commercial use.

“It’s beautifully sad,” Baker said, remarking on both the snow and on the risks and rewards inherent to commercial hemp growing.

Yet despite the recent raw weather, Baker said he’s glad he left California to bring hemp to the backyard of his Wisconsin hometown.

After the end of seven decades of prohibition under the same federal law that outlawed hemp’s cannabis cousin, marijuana, Baker believes Wisconsin is primed for growth in the agricultural hemp market.

Baker this year planted about 27 acres of dark-green hemp spread in small plots across southern Jefferson and Dane counties. The hemp plot in rural Whitewater was full of bush-sized hemp plants topped with sticky flower buds pungent in smell and rich in CBD oil—a legal, therapeutic compound that has surged in popularity and made hemp a promising cash crop for a growing number of U.S. farmers.

In Wisconsin, nearly 900 registered growers planted hemp plots this year, mostly in small tracts tended and harvested by hand. Altogether, about 2,000 acres statewide were earmarked for licensed hemp growing in 2019, the second year the state Department of Agriculture, Trade and Consumer Protection has allowed licensed growing of commercial hemp under an agricultural pilot program.

Last week, the U.S. Department of Agriculture unveiled a new framework of rules for hemp production, which was federally legalized in 2014 under the federal Farm Bill.

The new, interim rules would make hemp farmers eligible for some federal agriculture programs such as crop insurance.

Hemp is a sturdy, hearty crop that can be lucrative to grow, particularly given a burgeoning CBD market.

But it can be tricky to grow successfully, especially in volatile climates. Hemp and the retail market niche it’s found continue to face uncertainty under federal regulations still being fleshed out by the USDA and the U.S. Food and Drug Administration. Even so, it’s becoming a ballyhooed commodity in the health care market and has begun attracting large pharmaceutical corporations.

But the USDA process also serves to validate risk taken by startup hemp growers at a time when hemp is beginning to turn the corner from a marginalized, niche industry to a more broadly accepted agricultural movement. That’s mainly good news for Rock County, where a small consortium of family farms has begun to make forays into hemp growing.

Later this fall, Janesville-born Simply Solutions plans to ramp up commercial processing of hemp for CBD oil in a 30,000-square-foot building the company has retrofitted along East Conde Street on Janesville’s south side.

Simply Solutions CEO John Goepfert said the company already is processing CBD oil from harvested hemp at a Janesville business incubator. Within weeks, it should be ready to receive hemp being harvested by local growers.

Baker said he hopes to cash in on the sale of his crop to a few national CBD processors he said he “pre-sold” to, if the October snow doesn’t put too big of a dent into his yield.

He needs to repay investors, but he also wants to invest in some hemp farming and processing equipment, he said.

Baker moved back to Wisconsin this year to try his hand at Midwest hemp after spending years in California’s redwood country, a region that’s considered the cannabis-production epicenter of the nation.

In California, Baker was fighting what he said are state and local regulations that favor larger agricultural operations and make it harder for small growers to succeed in the West Coast’s legal cannabis business.

In Wisconsin, where hemp is still a small-scale, niche industry, Baker was granted a state hemp growing license. He operates under his limited liability corporation TFP (Truth, Freedom and Prosperity) Sciences.

Baker said he’s working with the city of Whitewater to buy a building where he wants to set up an indoor growing facility and lab and eventually “go vertical” with “high-end production.”

Ultimately, Baker said, he wants to gather together a hemp product research and development consortium to get a “scientific” approach rooted in the regional hemp industry. He thinks hemp is at home in southern Wisconsin, an area he said he considers a mostly progressive area of the state where he believes startup hemp operators might be able to find footing.

As with any major agricultural commodity, Baker said, he believe it’s a matter of time before hemp gets inhaled by what he calls “large ag.”

“Even here in Wisconsin, large ag is eventually going to push everybody out. Your best bet as a young farmer is either try to find a niche and really specialize in that or be happy even if the prices crash a lot. You’ll still be making so much more with hemp than most other crops at this point,” Baker said.

“It’s making sure you have the contracts (with processors). We’re trying to reach out and educate processors and the consumer that CBD just doesn’t mean CBD. You need to know your farmer, where it’s coming from, who’s processing it, what are their goals behind it.”

Most local hemp is intended for extraction of cannabidiol— better known as CBD—a compound that is non-intoxicating and is marketed as a health supplement.

But weather and other conditions can cause some hemp strains to over mature, causing CBD in the plants to convert to THC—the intoxicating and mind-altering compound present in hemp’s cousin, marijuana. THC continues to be an illegal, controlled substance in many states, including Wisconsin.

Most marijuana grown for recreational or medical use has a THC content of 3% to 10%, with some particularly potent pot strains containing 15% to 25% THC.

Federally legal hemp is allowed to contain just trace amounts of THC, generally not enough to cause users to become intoxicated.

Under USDA rules, hemp with more than 0.3% THC is considered “hot,” or essentially, marijuana. Under the new rules, hemp tested to be “hot” is required to be destroyed by a federal agent.

Baker said he believes those who advocate the therapeutic uses of CBD and THC are still pitted against major political and business interests in the pharmaceutical and agriculture sectors.

Baker acknowledges he bears scars from the years when some medical cannabis was legal in California but recreational use was not.

In 2011, Baker said he was among three people arrested on felony drug charges in Arcata, California, for being present at what at the time was considered an illegal, residential grow operation. The bust came at a house police reports indicate had false walls concealing 350 marijuana plants and “highly sophisticated” growing equipment. The home also was stocked with an AR-15 semiautomatic rifle and cash.

Baker said the court threw out evidence authorities had gathered in the raid at a house Baker claims he was only visiting for the night. Baker said he ended up pleading to misdemeanor pot possession and walked away with a fine.

Now, after the 2016 law change that made recreational THC and other cannabis legal in California, it’s unlikely Baker would face criminal charges for growing cannabis in a house.

Baker said he and a small group of other cannabis growers and activists had a hand in crafting policy that rolled into California’s cannabis legalization. He said he’s “not ashamed” of being arrested for pot, and he continues to be proud of his involvement as a cannabis activist.

He said his and others’ fights to legalize cannabis made him less averse to risk. He believes that legalization of various types of cannabis in some states has vindicated him and other earlier advocates. He believes his work with Wisconsin hemp is now legitimate farming that will give people health care choices.

“I was, like, a young kid seeing people have a better quality life. And it made me continue to pursue this path to fight towards the freedom to medicate the way you want to. The only problem, the only reason why any of this was ever illegal is because Big Pharma wants to make bunch of money.”