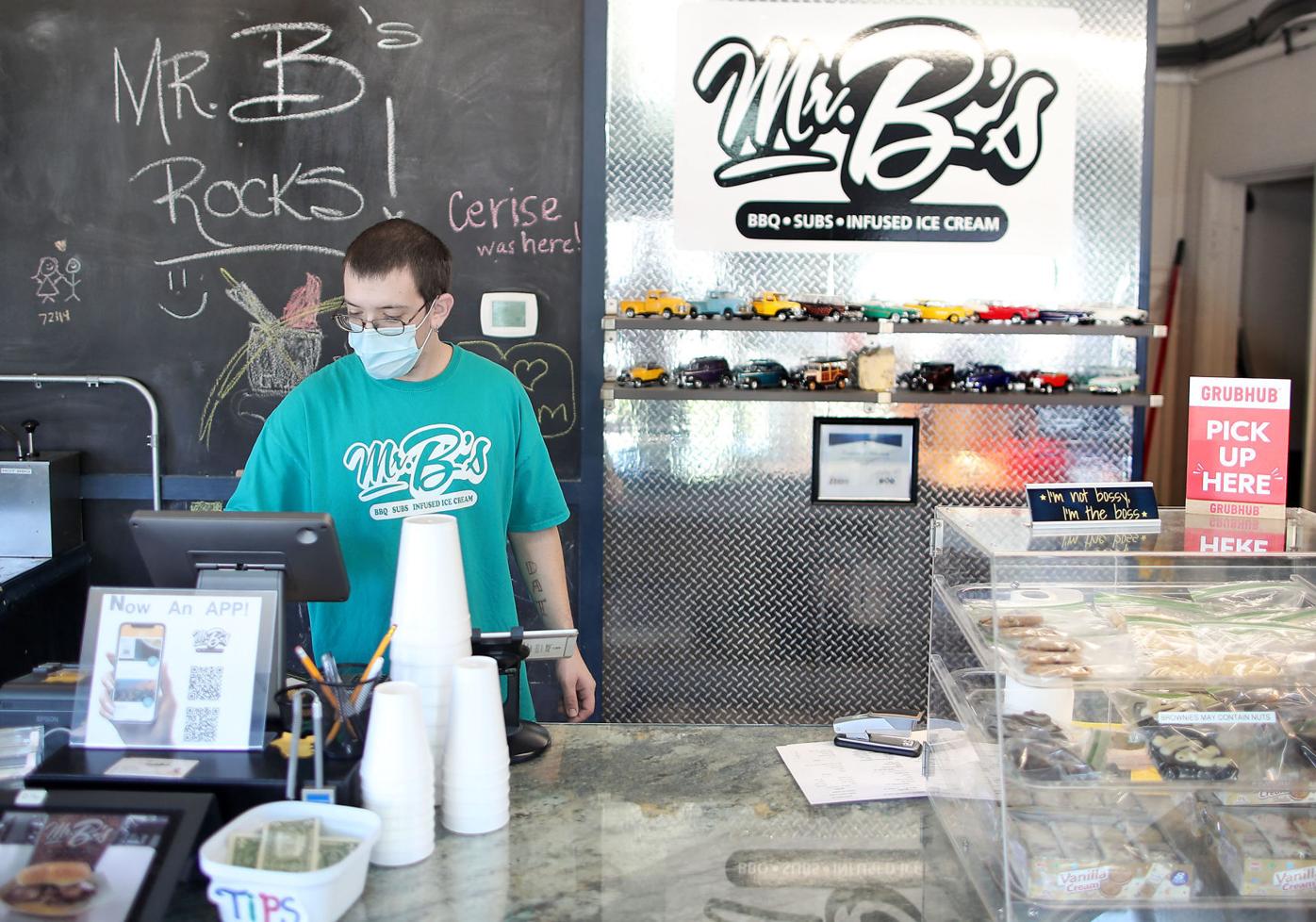 Kevin Brown mans the register for an order while working inside Mr. B’s BBQ, Subs and Infused Ice Cream on Saturday. The business on Milton Avenue has remained open despite the pandemic beginning only three months after their opening. 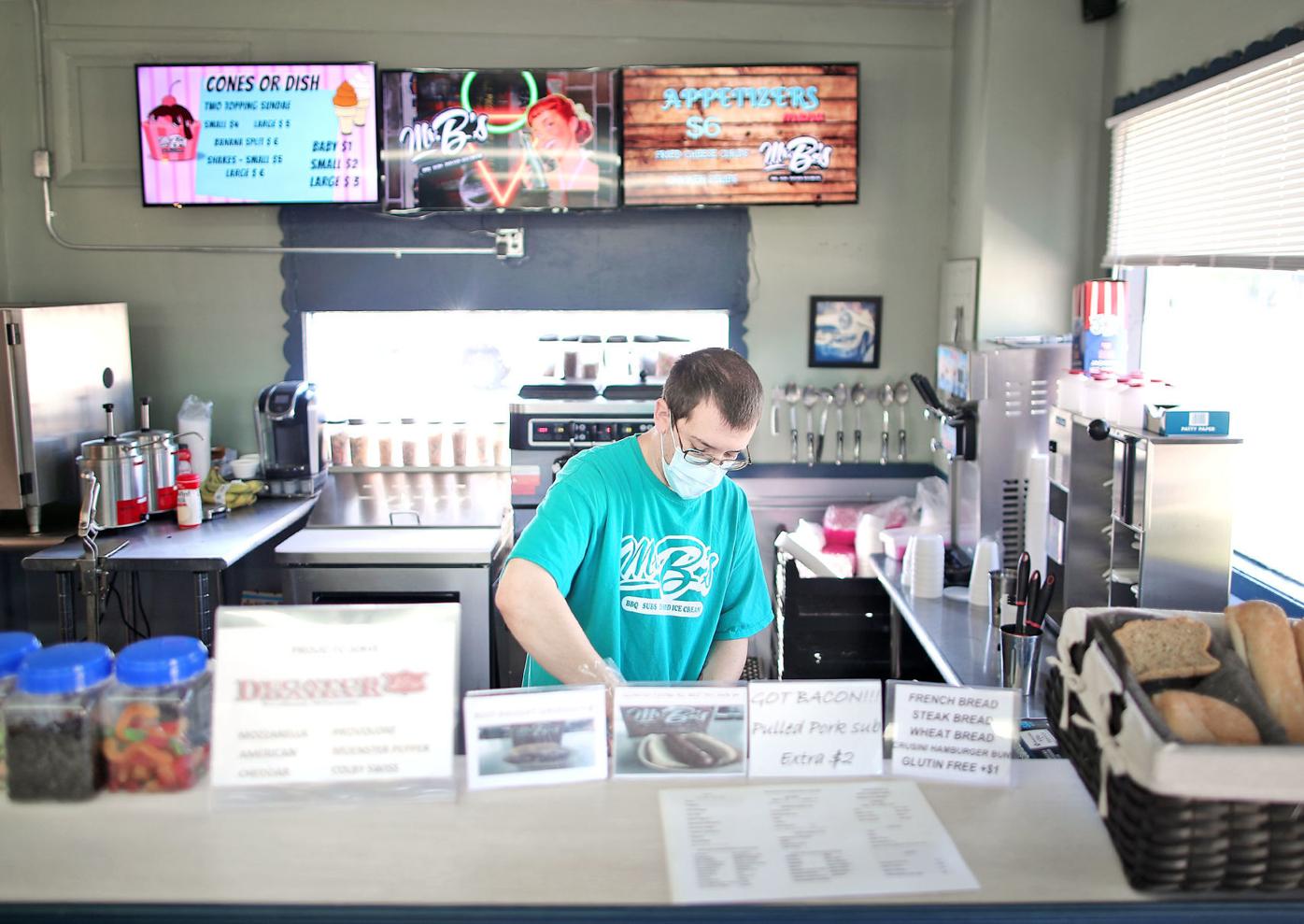 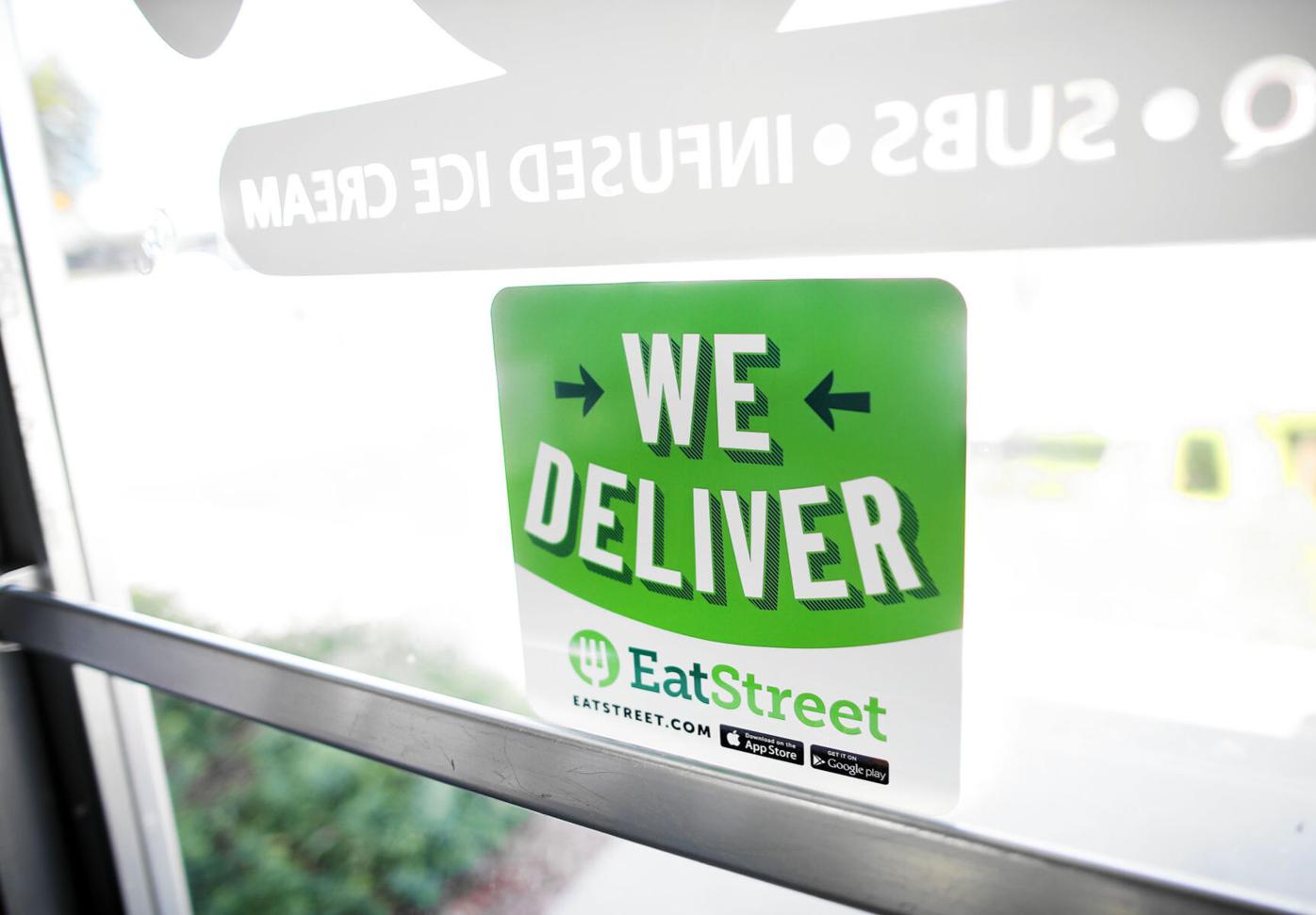 A sign on the door displaying Mr. B’s BBQ, Subs and Infused Ice Cream can be delivered through EatStreet. 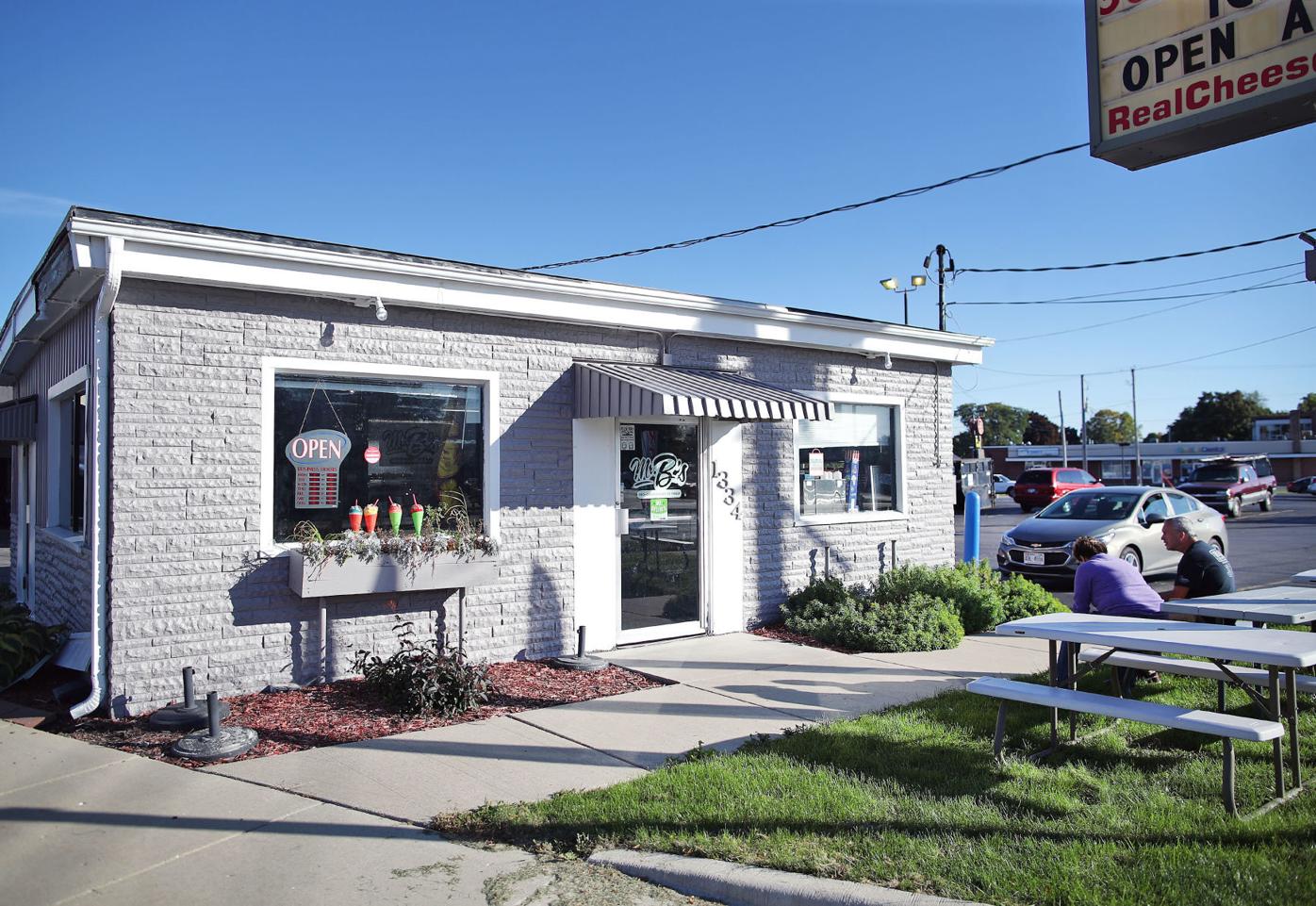 Mr. B’s BBQ, Subs and Infused Ice Cream opened on Milton Avenue in November but got hit by the pandemic after only three months of operation. 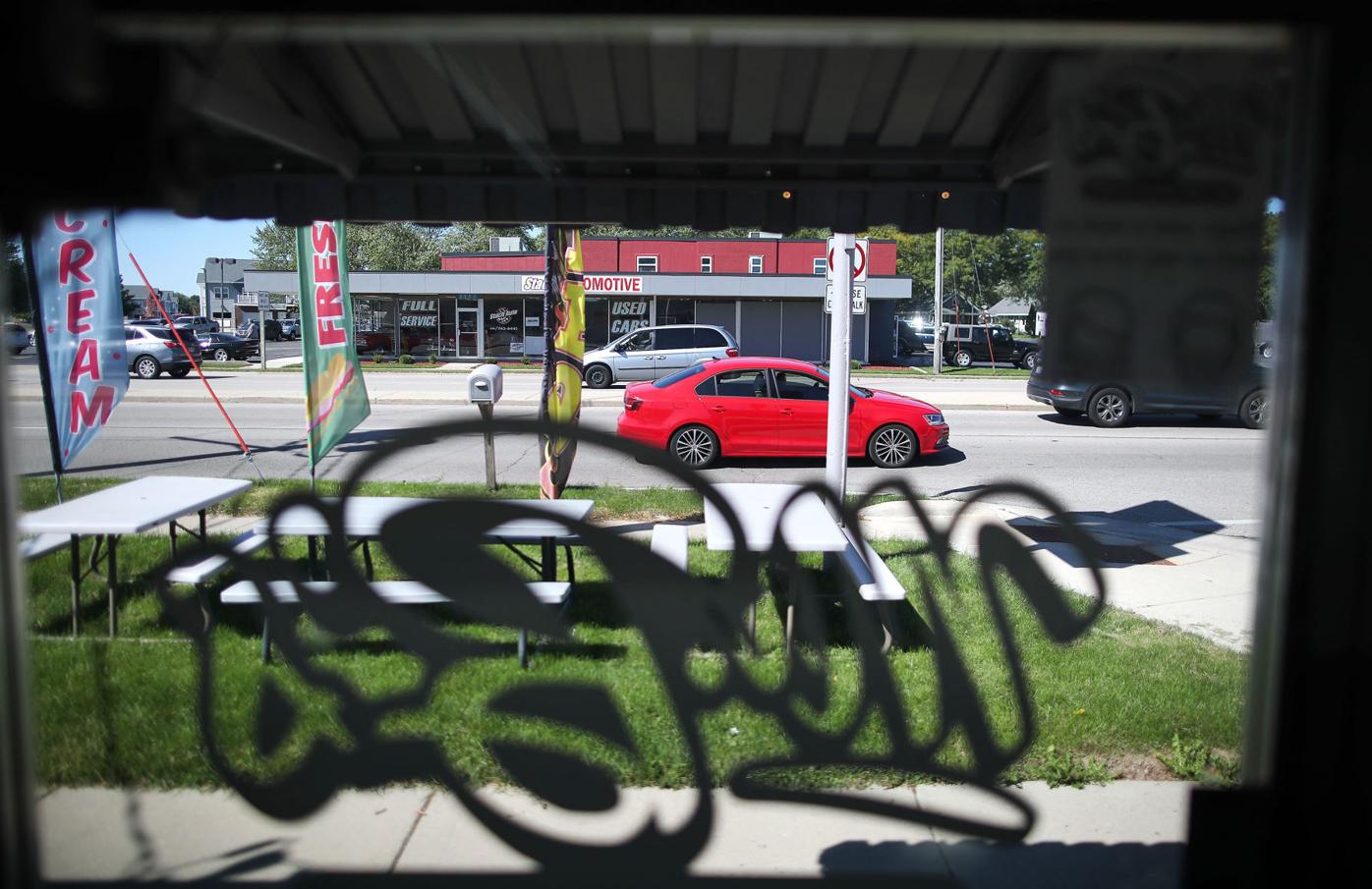 Kevin Brown mans the register for an order while working inside Mr. B’s BBQ, Subs and Infused Ice Cream on Saturday. The business on Milton Avenue has remained open despite the pandemic beginning only three months after their opening.

A sign on the door displaying Mr. B’s BBQ, Subs and Infused Ice Cream can be delivered through EatStreet.

Mr. B’s BBQ, Subs and Infused Ice Cream opened on Milton Avenue in November but got hit by the pandemic after only three months of operation.

After spending a few months in the dead of winter trying to carve out a reputation for barbecue and flavor-infused ice cream on the east side’s competitive restaurant strip, Mr. B’s found itself shifting into pandemic mode.

Mr. B’s has remained open continuously since the start of the pandemic, but management says the shop’s carryout and delivery business some days recently have outpaced the volume of in-store diners—a common recent trend for restaurants.

Kevin Brown manages the Janesville eatery at 1334 Milton Ave. that is housed in a formerly spotted cow-colored cheese shop. The place is getting by, Brown said, albeit amid a few staff cuts.

“We’re still trying to get our feet planted as a new business through all of this pandemic. We opened last year, but it feels like we’re still waiting and waiting to really do our big, public grand opening. Maybe later this fall we’ll be able to do that,” Brown said.

Mr. B’s might be weathering the pandemic (some lunch hours bring as few as nine or 10 customers) but a handful of other, longtime businesses on Milton Avenue and Humes Road have seen a dismal curtain fall during the summer and fall of COVID.

Elsewhere on the Milton Avenue, the World Buffet, a large-format, family operated Chinese buffet restaurant, has closed. Along the Humes Road strip, the Potbelly restaurant and the Pier 1 Imports store have closed, according to the city’s inventory.

Gale Price, the city’s economic development director, said some of of the closures come as big chains like Victoria’s Secret work through massive, nationwide restructuring tied to debt or bankruptcies.

The continued pressure that online commerce exerts on brick-and-mortar retailers, a tectonic force in itself, has combined with the sea change COVID-19 has placed on consumer behavior.

That’s a one-two punch that has shown itself to be too strong for some retail and restaurant chains.

“Unfortunately, that list of store closures is probably going to get longer and longer as time goes on,” Price said.

The lowdown on Uptown

Price’s forecast comes as the city’s shopping mall, rebranded this summer by owner RockStep Capital as “Uptown Janesville,” has continued to lose retailers and food court tenants at a steady clip.

Weiner said the closure of lingerie seller Victoria’s Secret was surprising to him because he said the Janesville store sold “great volume.” But he said when RockStep had bought Uptown Janesville in 2018, the company had assumed some retailers would close—a trend he calls the “right-sizing” of both local and national retail market.

“We had kind of underwritten some closings and knew they were coming. Were there a couple of more because of COVID? Yes. Is it unfortunate? Yes. Is it a once-in-a-lifetime type of thing? Yes,” Weiner said.

Weiner said Uptown Janesville’s wave of retail departures has rolled out heavily over the last three years, but he called that trend “a situation that’s now in the seventh or eighth inning.”

The 600,000-square-foot Uptown Janesville is being re-envisioned as a real estate complex that could blend office, clinic and small warehousing use with traditional retail.

Yet, Weiner said the mall’s biggest prospects for revival remain tied to potential reuse of its hundreds of thousands of feet of vacant anchor store space that went defunct pre-pandemic, when the Boston Store and Sears stores closed in 2018 and 2019.

Weiner said RockStep continues to offer the city the former Sears property at no cost with the idea that its footprint could become home of a public-private hockey rink and indoor sports complex.

Weiner said RockStep continues to plan a separate family activity and entertainment center in the former Boston Store, but he said that project hinges on whether city and private stakeholders back a sports complex at Uptown Janesville.

But further planning and private fundraising for the planned hockey rink and sports complex remain on hold—probably until at least this fall, officials have said. That is largely because of economic uncertainty tied to the pandemic.

At Mr. B’s, Brown said uncertainty has been mainly over how to staff a mom-and-pop restaurant with a significant amount of orders done on delivery. Early on in the pandemic, he said, the store cut back on employees, opting to send a few workers to Steve’s Deli Doghouse, a local sister company that Mr. B’s spun off from.

Brown said there are days when Mr. B’s has a dining room busy enough to support more workers, but on a recent Friday afternoon, he was the only employee in the place.

Some days, Brown indicated, the shop runs largely through curbside pickups and deliveries.

Brown said the restaurant has become well acquainted with a pair of third-party food delivery services, Eat Street being one.

Mr. B’s is in a distinctly different situation than chain retail franchises. It’s not tied to national marketing and sales strategies, and with a smaller scale and ties to a sister company, the restaurant can more quickly pivot in the uncharted territory that is the pandemic.

For instance, on days when delivery orders overflow, he said, Mr. B’s can draw off a delivery vehicle fleet and employees at Steve’s Deli Doghouse, Brown said.

Others have been unable to keep their heads up.

During the start of the pandemic, restaurant chain Potbelly had received a $10 million federal bailout package geared for small businesses.

Potbelly returned that cash after a public outcry over a large chain with hundreds of locations being granted funding that was intended for smaller, mom-and-pop businesses.

Shortly afterward, Potbelly announced plans to lay off one-third of its workforce and eventually shutter at least 100 struggling stores.

Janesville’s Milton Avenue location has remained closed through the spring and summer weeks of the pandemic. Last month, the Potbelly closed permanently, apparently.

Potbelly’s public relations office did not respond to inquiries by The Gazette, but the eatery has a sign on the door that indicates the Janesville location is closed.

The most recent corporate communication is a Sept. 10 post on the Potbelly’s company Twitter feed that reads:

“When you go through a period of prolonged stress, sometimes you become numb. Odds are you’re not feeling apathetic and exhausted because you don’t care. Your body is trying to protect from a threat it perceives—it’s a coping mechanism,” Potbelly’s tweet reads.

This report has been modified from an earlier version that listed a Sbarro restaurant at 2500 Milton Avenue as being recently closed, according to a city of Janesville inventory of recent retail closures. Sbarro was closed previously.