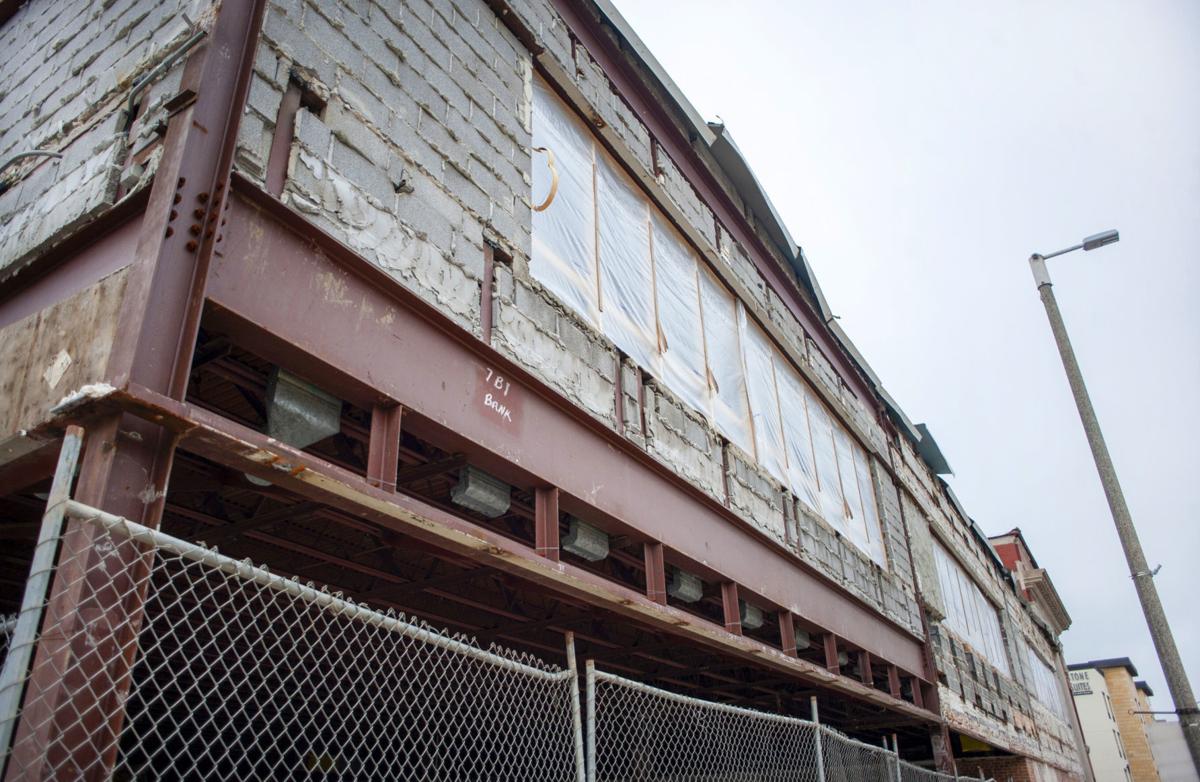 Concrete block is exposed on the former First National Bank building at 100 W. Milwaukee St., Janesville. Blackhawk Community Credit Union had planned to remodel the building into a Legacy Center honoring General Motors workers, but it recently put the project on hold. 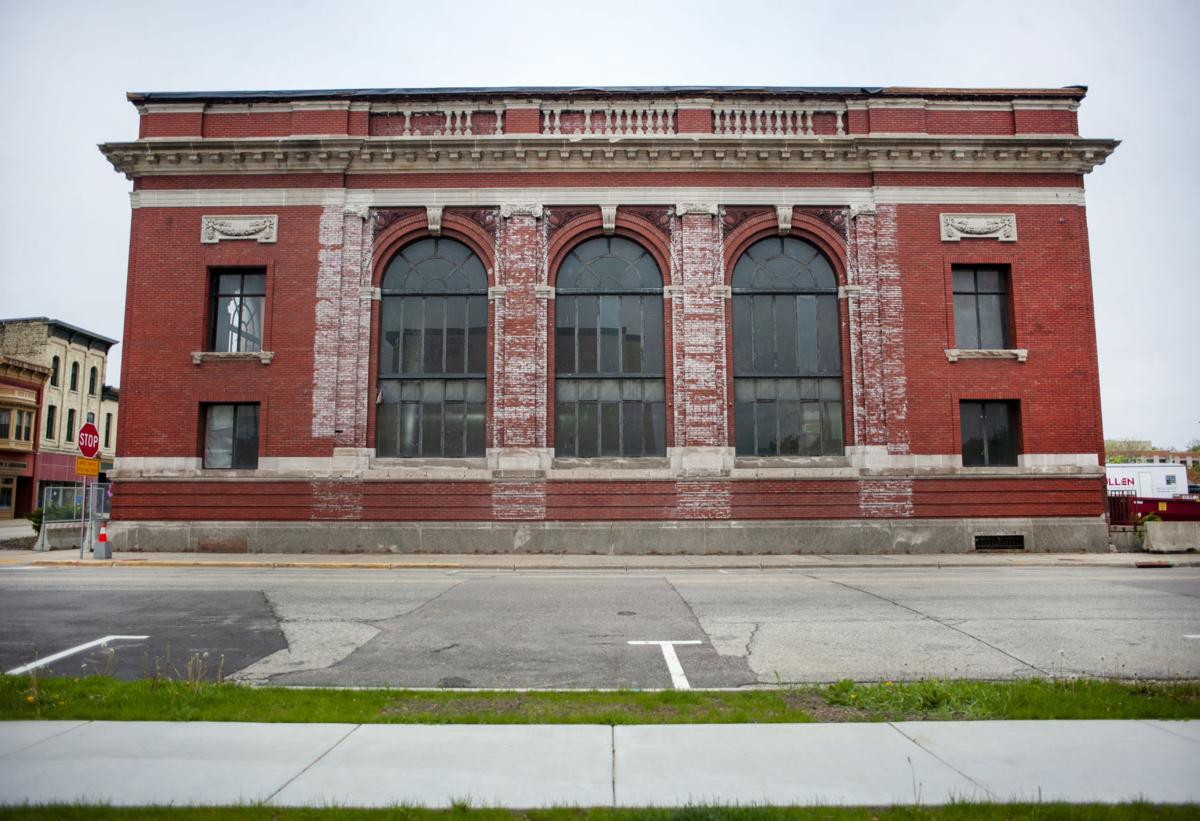 A Blackhawk Community Credit Union officials said the credit union’s pause on its Legacy Center project is emblematic of a shift away from real estate development. 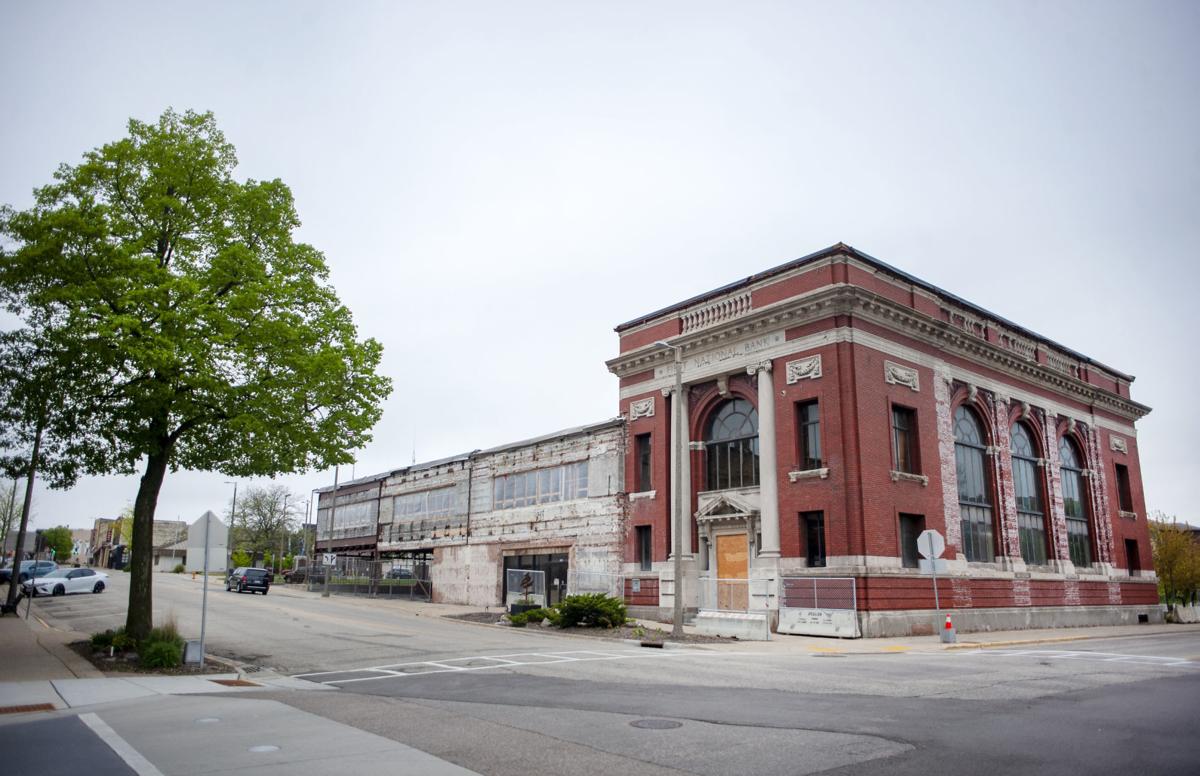 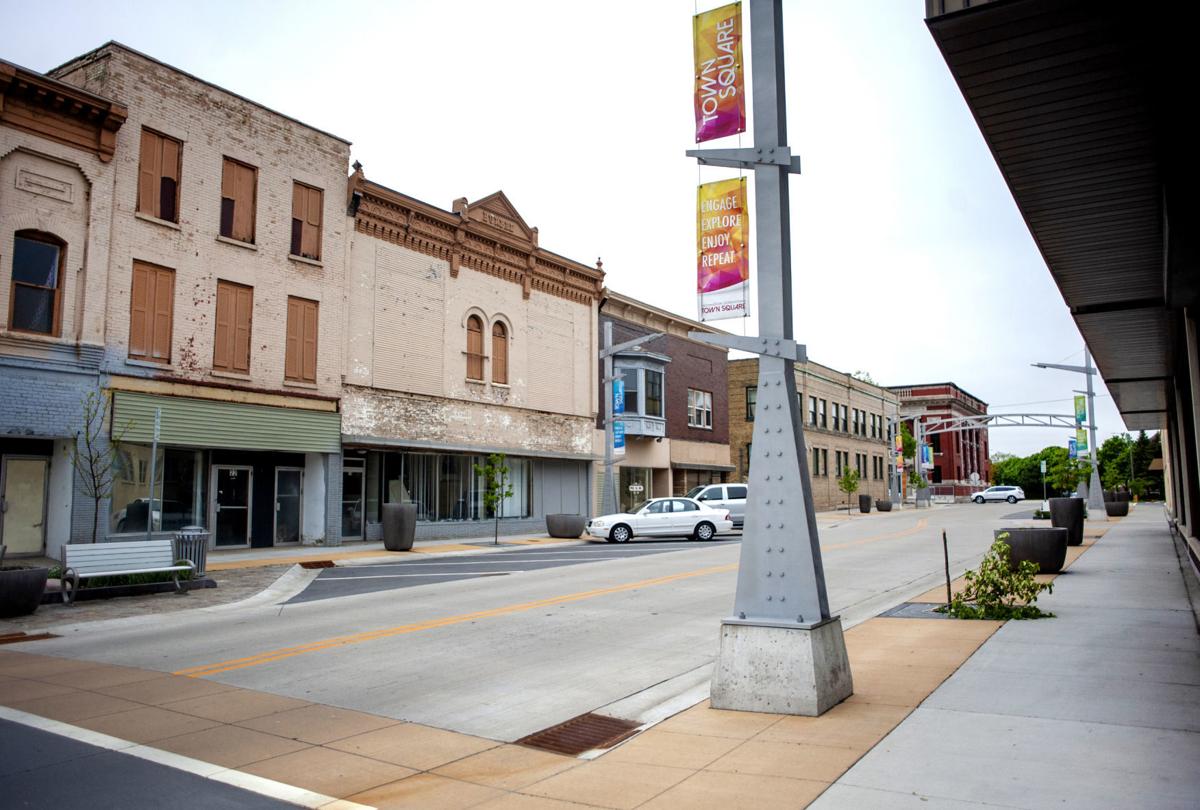 Tuesday afternoon, a family of swallows cackled in a nest underneath loose metal flashing along the roof line of Janesville’s former First National Bank.

That was the only action going at the 107-year-old downtown bank on North River Street. Plans have stalled to turn the vacant building into a museum-like showpiece to honor autoworkers at the former General Motors assembly plant.

Blackhawk Community Credit Union, the building’s owner, shelved the Legacy Center project earlier this month. The credit union is not tipping its hand much on the property’s future or its plans for a Legacy Center.

But spokeswoman CeeCee Philipps said the work stoppage is emblematic of the credit union’s shift away from its aggressive push into real estate development in recent years.

Amid turnover in its top ranks, including last month’s departure of CEO Sherri Stumpf, the credit union says it now plans to sell a nearby property it bought out of foreclosure last year—the former Town and Country restaurant one block south of the old bank.

Both properties encompass almost half of the commercial real estate in a two-block area of River Street, which is near the downtown area that has been the focus of revitalization efforts by the city and private entities.

Stumpf had led efforts to redevelop the Legacy Center, and she had gone public last year with plans for the former Town and Country property.

The city has issued raze-or-repair orders on the gutted, half-block-long restaurant property. The credit union had planned since last fall to demolish the building after a former owner failed to sell it.

Meanwhile, the credit union also scrapped plans to build a new headquarters on the site of the former Moose Lodge on Rockport Road. Both the Legacy Center and the headquarters building were to be completed by 2021.

Philipps said the credit union has a buyer under contract for the former Town and Country, and a deal could close in June.

She declined to identify the buyer or the buyer’s intentions for the site, saying only that the deal would be a “good fit” for downtown.

Last summer, Stumpf told The Gazette the credit union had considered salvaging part of the building. By fall 2019, she had switched course and said it would be razed because inspections showed it wasn’t structurally sound.

At the time, she said the site had potential for mixed commercial-residential use.

In an interview, Janesville City Manager Mark Freitag said the raze-or-repair orders remain in effect. Based on talks with credit union officials, the city expects the property will be razed by early July, he said.

It’s not as clear what might occur at the former First National Bank building.

As recently as January, Stumpf had announced plans to turn the bank’s annex offices that overhang the drive-through into space for a small grocery store and coffee shop.

The credit union already has stripped back the building’s marble façade to reveal the original 1913 brick exterior. Inside, contractors have pulled out walls and ceilings that covered a vaulted ceiling and mezzanine.

Jim Johnson, who bought the property from former owner Chase Bank in 2017, said he had several interested buyers before Blackhawk Community Credit Union bought the site. Those suitors included developers who Johnson said were eyeing plans for downtown apartments.

Most of those prospective buyers were interested in demolishing the bank and redeveloping the 1.5-acre site. Johnson said he “resisted” selling to them and felt good when he sold the property to the credit union because it planned to restore the bank to its 1913 condition.

Philipps said the credit union intends to move forward on a Legacy Center at some point, but it hasn’t decided whether the center will be located at the former bank.

She declined to discuss whether the credit union would consider selling the property. She said the credit union is a “responsible company” that has no intention of leaving a historic downtown property hanging fire over the long term.

“We’re not going to leave things in a state of flux,” Philipps said. “We are committed. The decisions that we make are going to be right for our members, but also for the community. Our commitment is that we’re not going to do something that’s not going be in line with what we’d want to see happen in Janesville as well.”

Blackhawk Community Credit Union leaders are in talks with a developer to buy the former Chase Bank downtown. Meanwhile, the city has asked the credit union to repair the building by Aug 24.