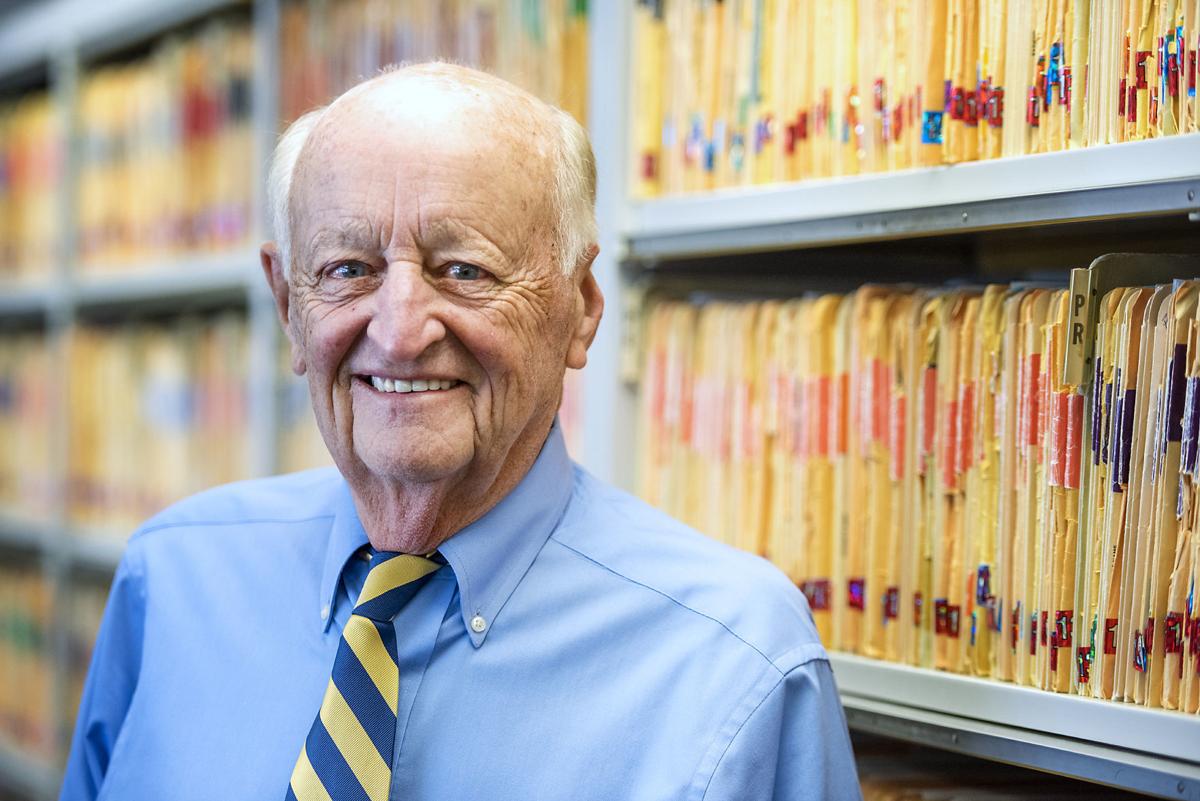 Dr. Thomas Haye, 83, stands near records that line a wall in his Janesville dental office. This year, Haye Dental Group is celebrating Haye’s 50th year as a practicing dentist in Janesville. 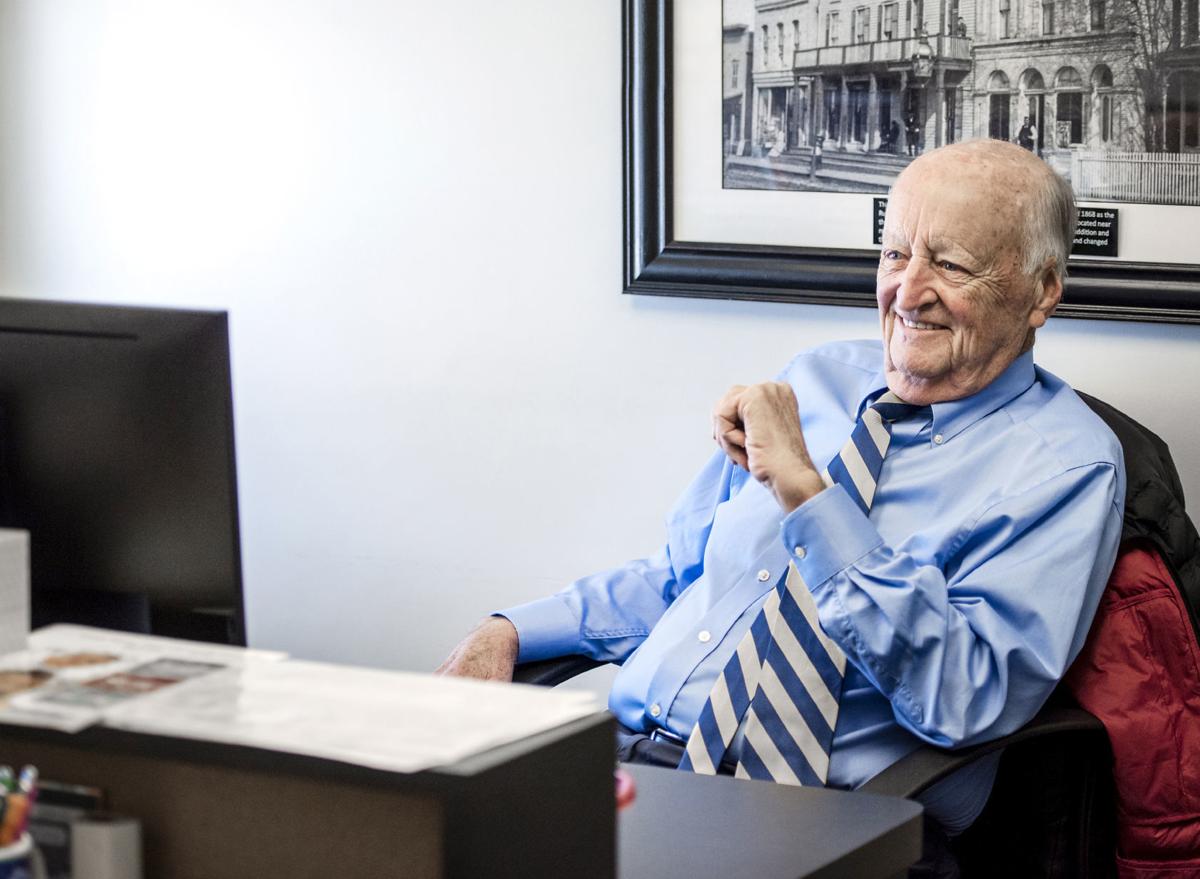 Dr. Thomas Haye leans back in his desk chair while speaking to The Gazette about his 50 years as a dentist in Janesville. 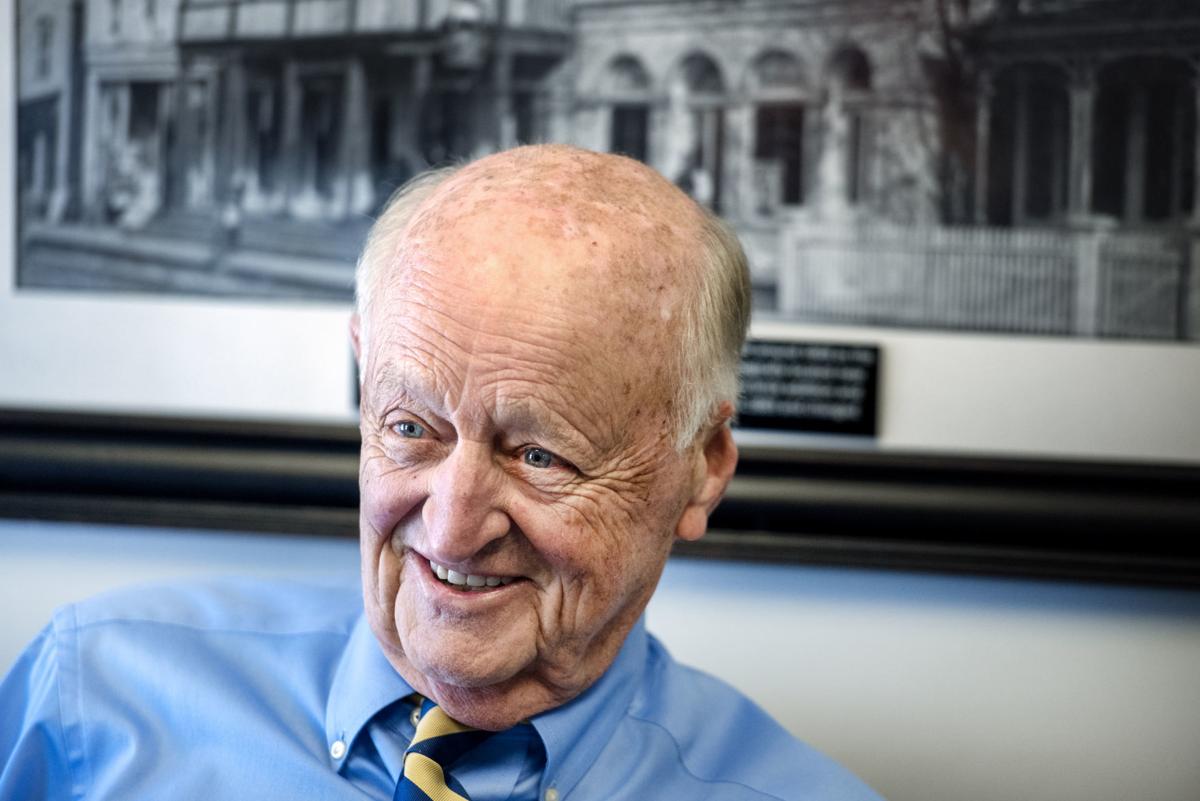 Dr. Thomas Haye speaks to The Gazette at his Janesville office. Haye has been a dentist in Janesville for 50 years.

Haye said it was the late Charles Ferguson, a Janesville bridge builder who showed up with a broken tooth. An incisor. It was the week of Oct. 6, 1969.

At the end of that week—Haye’s first full week running his then brand-new dental clinic in Janesville—Haye had $14 in a cigar box he once used as the clinic till. He remembers how much his one-man practice cleared that first week because his spouse called him at work to ask if he’d take her on a weekend trip to the couple’s hometown of Dubuque, Iowa.

“She called me and said, ‘Do we have enough money to go to Dubuque?’ I looked in the cigar box and said, ‘Yeah, I’ve got a whole stack of money here.’ Later, I took the money out and counted it. It was 14 one-dollar bills,” Haye said.

This year, Haye Dental Group is celebrating Haye’s 50th year as a practicing dentist in Janesville. Haye, who is 83, said he’s celebrating the 50-year milestone by continuing to do what he’s done in Janesville for half a century.

Now, Haye practices about one day a week, seeing some of the same patients he saw when he was in his early 30s. Some of those patients have children and grandchildren who come to the clinic. Haye said some people are easy to recognize even if he’s never met them.

“Some people have the same smile as their mom or dad,” he said.

Haye has seen a lot of smiles. Based on a numerical filing system he’s always kept, Haye estimates that in 50 years practicing dentistry in Janesville he’s seen at least 500,000 visitors—a half-million smiles, some with critically problematic teeth.

Haye Dental Group is now a three-generation family enterprise with two locations on the east and west sides of Janesville, but in 1969, Haye and his dental practice were brand new to the city. He wouldn’t even get his business listed in the local telephone book until 1970.

Haye started out on the fourth floor of the Court Square Professional Building on South Main Street in downtown Janesville—a space the owner had offered to renovate special for a one-man-show dental office. At the time, Haye had never even heard of Janesville. All he knew about the city was that it seemed affordable and close enough to Chicago and Milwaukee to drive to those cities whenever he felt like it.

Otherwise, Haye was thinking about settling in New York, California or Arizona.

After looking at the office space where he would later place his first clinic, Haye drove past the downtown YMCA still located on West Court Street. Five minutes later, he had made his decision.

“At the time, I liked handball, and I wanted to play handball. So I went in the YMCA to look around. They had two brand-new handball courts there. That did it,” Haye said. “I said, ‘OK. It looks good. Let’s check out the rest of town.’”

Haye started work in the late 1950s as a pharmacist, but he decided he didn’t like filling capsules and counting pills all day. He went back to college, the University of Iowa, and earned a doctorate in dental surgery.

In Janesville, Haye said he built a reputation and practice by supplying a workmanlike service to workmanlike people of a blue-collar city. Haye simply made himself available whenever, Haye’s son and partner at Haye Dental Group, John Haye, said.

John Haye, who has been practicing dentistry for 32 years, said his father’s longevity is humbling, and it’s rare. Most dentists don’t practice for a half-century. The career is demanding; the deadlines never stop.

“He’s been on call for 50 years. In those earlier years, I remember growing up as a kid, and, you know, he never said, ‘No,’ to an emergency. I think that was, you know, how he built the practice. It didn’t matter about money. He would see everybody. He’s bighearted with it,” John Haye said.

Today, Tom Haye appears spry for a man a shade past 80 years who has had a hip surgery or two. He’s got a fit, compact physique, still built like the baseball shortstop he was during his college days.

Every day Haye comes into work, he wears a tie and the same color oxford dress shirt he’s worn since 1969: always light blue.

Haye said he might try to practice 60 years. Why keep doing it? Isn’t 50 years of root canals enough?

Haye said root canals aren’t as bad as everyone makes them out. Most, he said, are “uneventful.”

Or maybe he’s just that good. One longtime patient thinks so.

Haye showed an award he keeps at his desk that might be his crowning achievement. It’s a large molar made of crystal mounted on a trophy base. The trophy was a gift from a longtime patient who wanted to thank Haye for taking care of her teeth for 45 years.

“If you take care of everybody, at the end of the year, the money is there. You can’t work for money,” Haye said. “That’s how I always looked at it.”