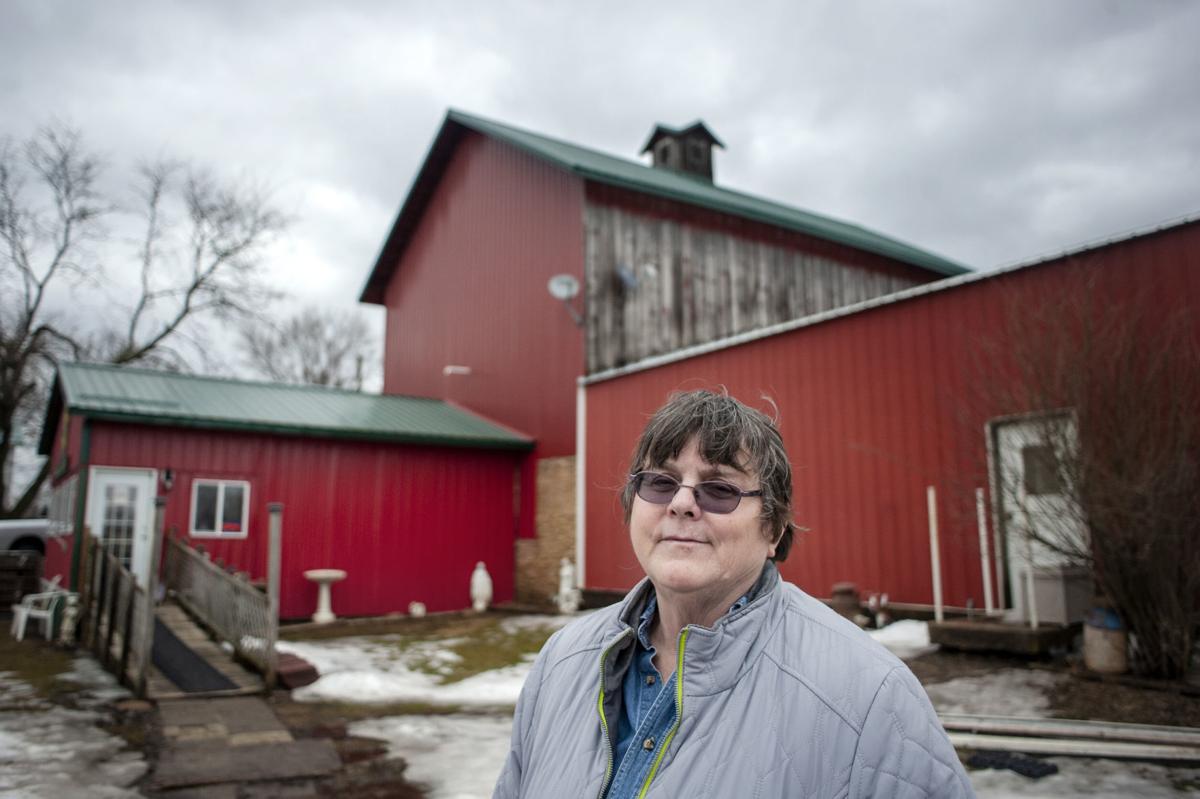 Barbara Beeler stands outside of her business, Double B's Country Store and Cafe, on in the town of Beloit. 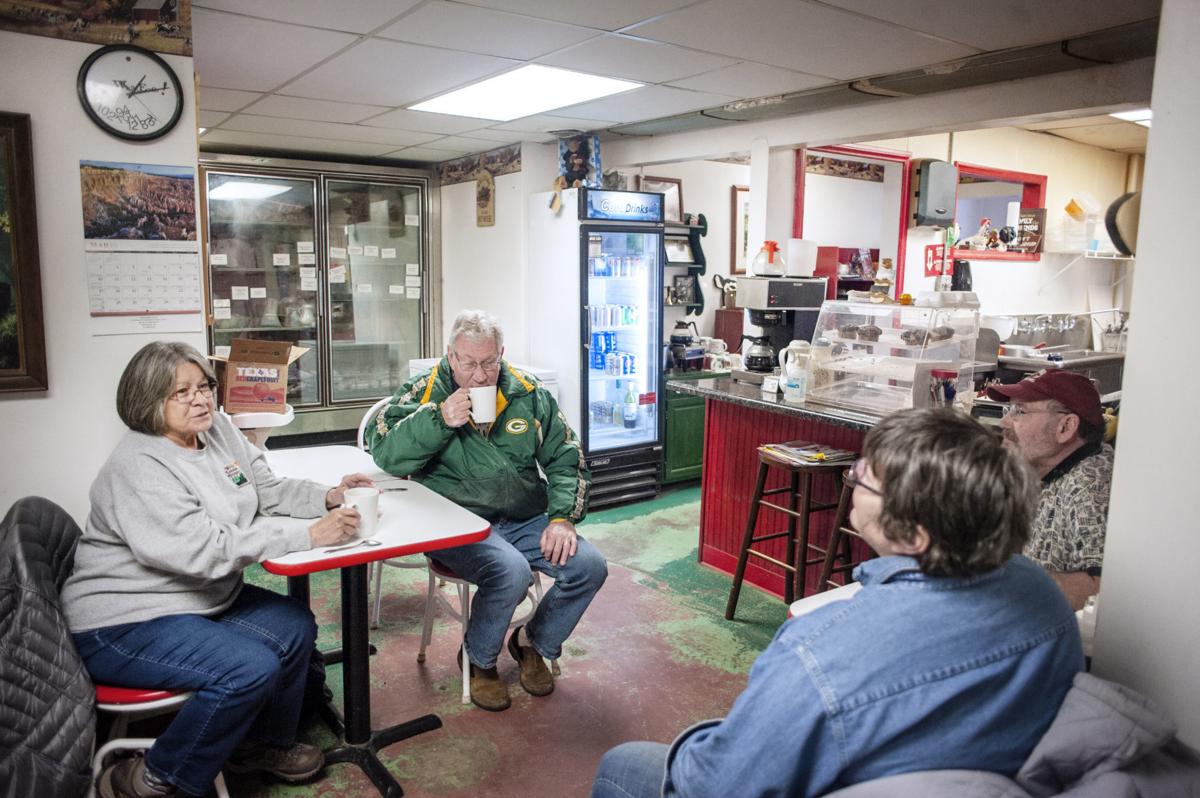 Joanne and Dave Kreinz, left and center, chat and drink coffee with Barbara Beeler and her husband, Dan, at Double B’s Country Store and Cafe in the town of Beloit. 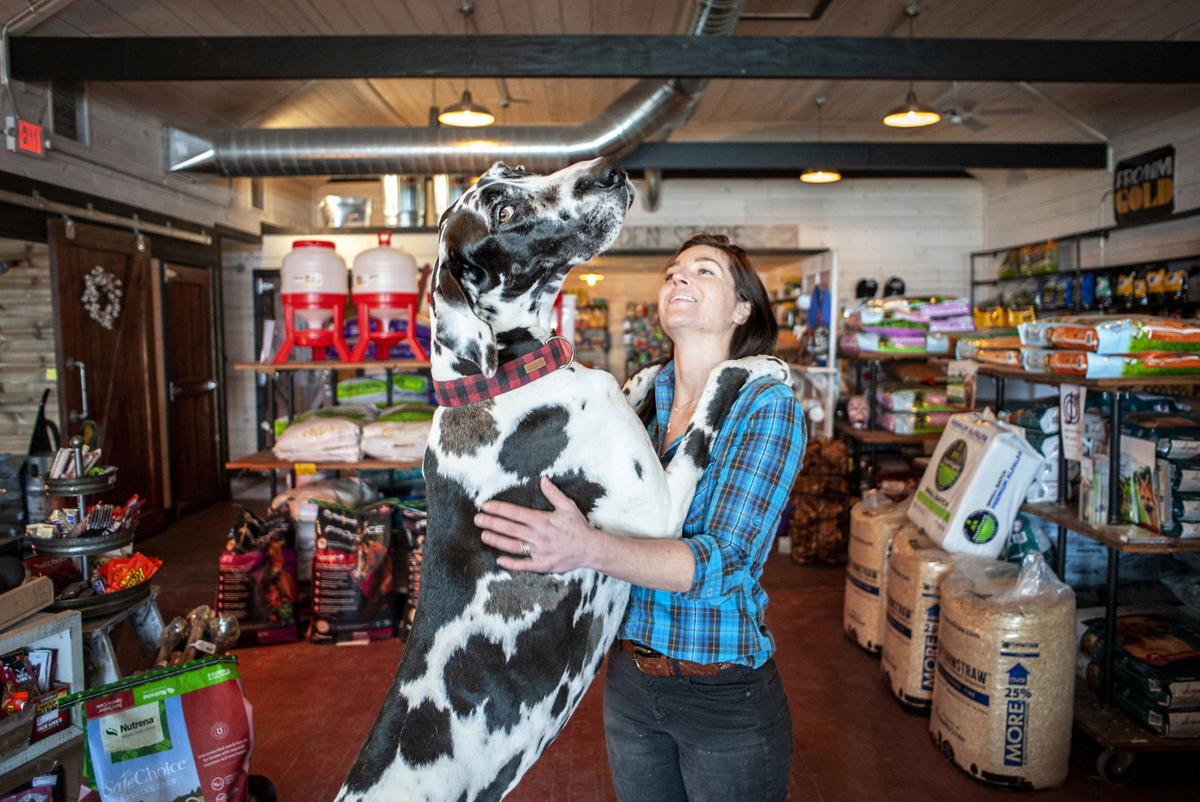 Janell McMahon stands with her 4-year-old dog, Lucy, inside of J’s Feeds in Janesville. 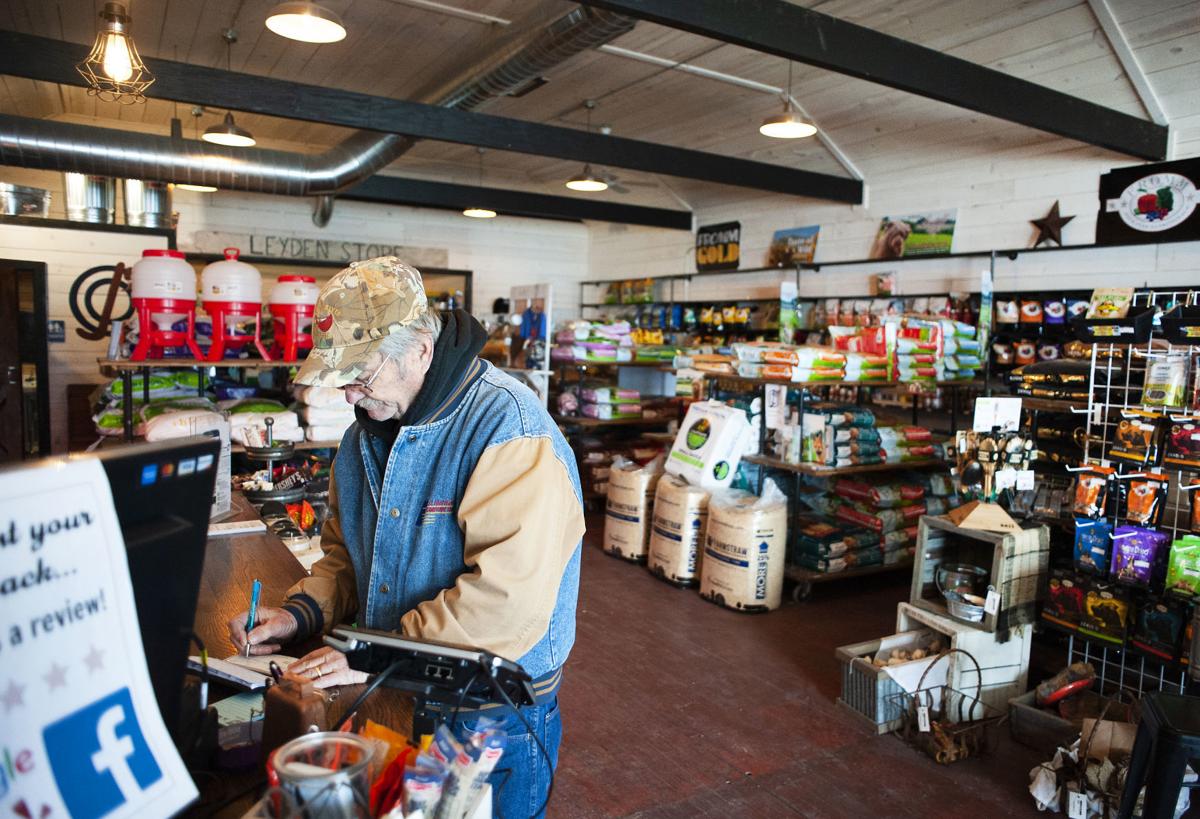 Wendell Severson signs a check after shopping at J's Feeds in Janesville.

J’s Feeds has operated its two locations in western Rock County for only a few years.

Even in that short time, the farm supply store has had to adjust in response to challenges plaguing the agriculture industry.

The store started charging a delivery fee, for example, because farm clients are fewer and farther between, owner Janell McMahon said.

The stores expanded their pet food selections to appeal to those who don’t live on farms.

J’s Feeds does what it can to help its customers, such as offering payment plans, but it can’t be a credit company. It must do what’s best for business, she said.

Market forces have afflicted farmers in practically every commodity. Some farmers have drawn from their bank accounts and tried to persevere. Some have sold their animals and switched to other types of farming. Others have left the industry.

As farms evaporate—Rock and Walworth counties have lost dairy farms every year since at least 1975—rural businesses that rely on farmers are feeling the impact.

“I think it’s simple as driving down the road,” McMahon said. “Count how many dairy farms used to be a dairy farm. Right now, there might be horses in that pasture. It’s obvious that was a barn. There’s nothing there now. It is that simple.

“How has it affected? Well, they’re just gone.”

Barbara Beeler has noticed the empty barns, too. She remembers passing many thriving farms on drives to Brodhead as a girl. Now, the barns are worn out and abandoned.

That translates to a smaller pool of customers for Double B Farm Country Store and Café, the tiny business she and her husband operate on their animal farm in the town of Beloit.

Plenty of farmers frequent the café. It also manages to attract city dwellers from Rockford, Illinois, and even Chicago searching for an authentic farm experience, she said.

For many rural business owners, their struggles aren’t as acute as those of their farmer neighbors.

Customers might have nothing to do with farming, so their spending habits aren’t dictated by swollen markets or tariff pressures.

And some farmers are dedicated patrons, using the rural grocery store or restaurant as a community gathering place.

“A lot of the farmers around this area are very loyal to the small businesses, which I think makes a huge difference,” said Kyla Wilke, owner of the Ding-A-Ling Supper Club in the tiny hamlet of Hanover. “Instead of driving to town to go to a chain restaurant, they’ll support the locals before they’ll do that, which I think is huge.”

Being so far out in the country, the Ding-A-Ling suffered more from harsh winter weather than low commodity prices. That’s not to say Wilke is unfamiliar with farming’s challenges. Her husband, Jerrad Wilke, now raises beef and crops nearly a decade after leaving dairy.

Beeler blamed the weather for light traffic at Double B’s. Icy roads this winter occasionally forced her to close the restaurant, whose closest neighboring business is several miles away.

The Beelers’ farm has managed to do all right. Raising meat for the café somewhat insulates them from the ebbs and flows of agriculture.

But she hears the stories of those whose livelihoods are tied directly to the market.

“Right now, it’s the hay prices. If you didn’t plan ahead and you’re looking for hay, it’s going to hurt your wallet,” Beeler said. “The milk prices are down. I hear a lot about the tariffs are hurting them.

“We had one guy who said if he has another year like last year, he’ll probably be bankrupt. You hear stuff like that.”

Even some of Beeler’s farmer customers who have no debt are struggling. They’ve had difficulty competing with enormous operations that have indirectly forced small farms out of business, she said.

Those massive farms, some of which have out-of-state owners, often aren’t buying from local feed stores or implement dealers. They aren’t having a beer and burger at the tavern down the road, Wisconsin Farmers Union President Darin Von Ruden said.

“The bigger issue is the number of dollars leaving communities when small farms disappear. They’re not spending those dollars locally anymore,” said Von Ruden, whose union district covers Rock County. “That farm is probably banking out of the area or maybe even out of the state. And buying a lot of their commodities directly out of shipping terminals instead of buying from a local supplier.”

Local co-ops or feed mills might compensate by merging and then closing the smaller business, forcing farmers to drive longer distances for basic needs. If a community’s economic and employment base dries up, the place could turn into a ghost town, he said.

J’s Feeds often finds itself stuck if one of its clients leaves farming. The farm will focus on paying off the bank first and will let feed payments slip down the priority list, McMahon said.

“The viability strictly is all on us. That’s on us to say, ‘Yes, we can do that for you, and we can do this price,’ or ‘No, we can’t,’” she said. “There’s got to be a cutoff because that’s just not smart business anymore. We’ve had to watch every dollar.”

Sometimes it’s the customers she thought would be the most reliable who end up reneging on their payments. They might be dealing with additional financial pain that has nothing to do with farming, she said.

Other farmers might choose to buy their feed elsewhere, accepting lesser quality at a cheaper price from a chain store. McMahon doesn’t fault them—business is business, she said.

So J’s Feeds does what it can to highlight its niches.

Inside the doors of this converted general store, customers might be greeted by Lucy, a friendly Great Dane with a Holstein-patterned coat. There’s also R.J. the goldendoodle and Leyden the calico cat.

It’s a personal touch that helps endear the store to visitors. People sometimes call ahead to confirm the pets will be there, McMahon said.

Outsiders who didn’t grow up in agriculture might have a hard time understanding how farming impacts rural communities and how each farm closure is another missing piece of the local puzzle, she said.

But like many farmers who pride themselves on resilience, McMahon is resolute as she faces the challenges of being a farm supply business owner.

“I stay in it for the customers. I enjoy the relationships. I enjoy seeing their smiles and knowing what they got going on, and sharing a cup of coffee or a Sun Drop,” she said.

“Even if it means that they can vent to me of how crappy things are, there’s a lot of good in it. Otherwise, people wouldn’t continue to do it every day.”