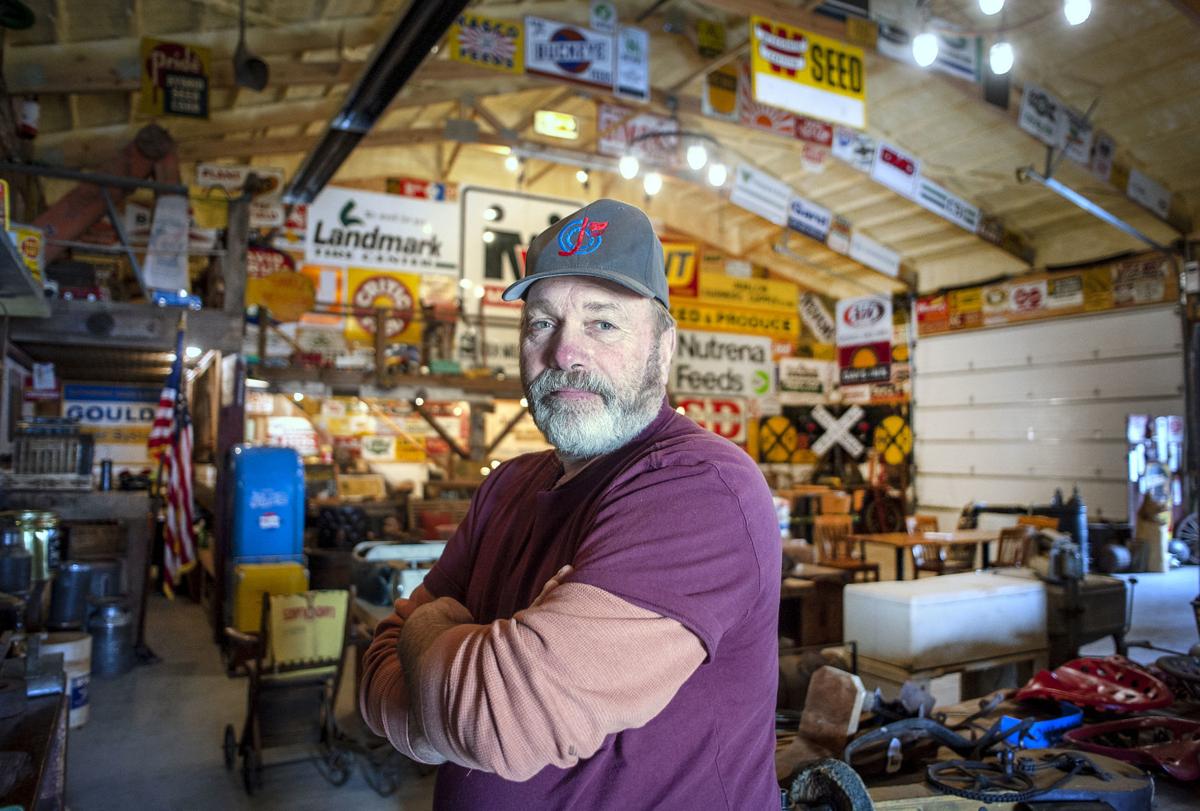 Dan Janes inside his shed filled with farm related memorabilia near in Evansville. 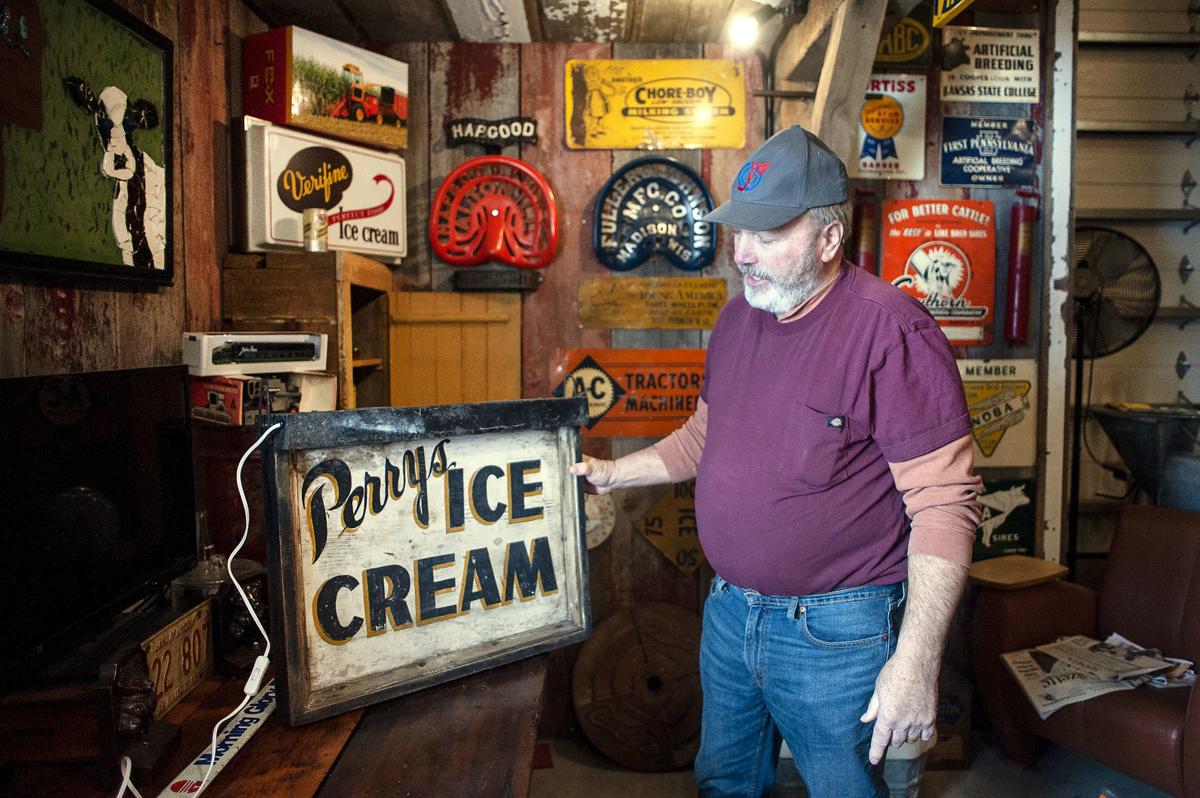 Dan Janes stands next to a sign that originally hung at the farm in the 1930s, before his family took over the property. 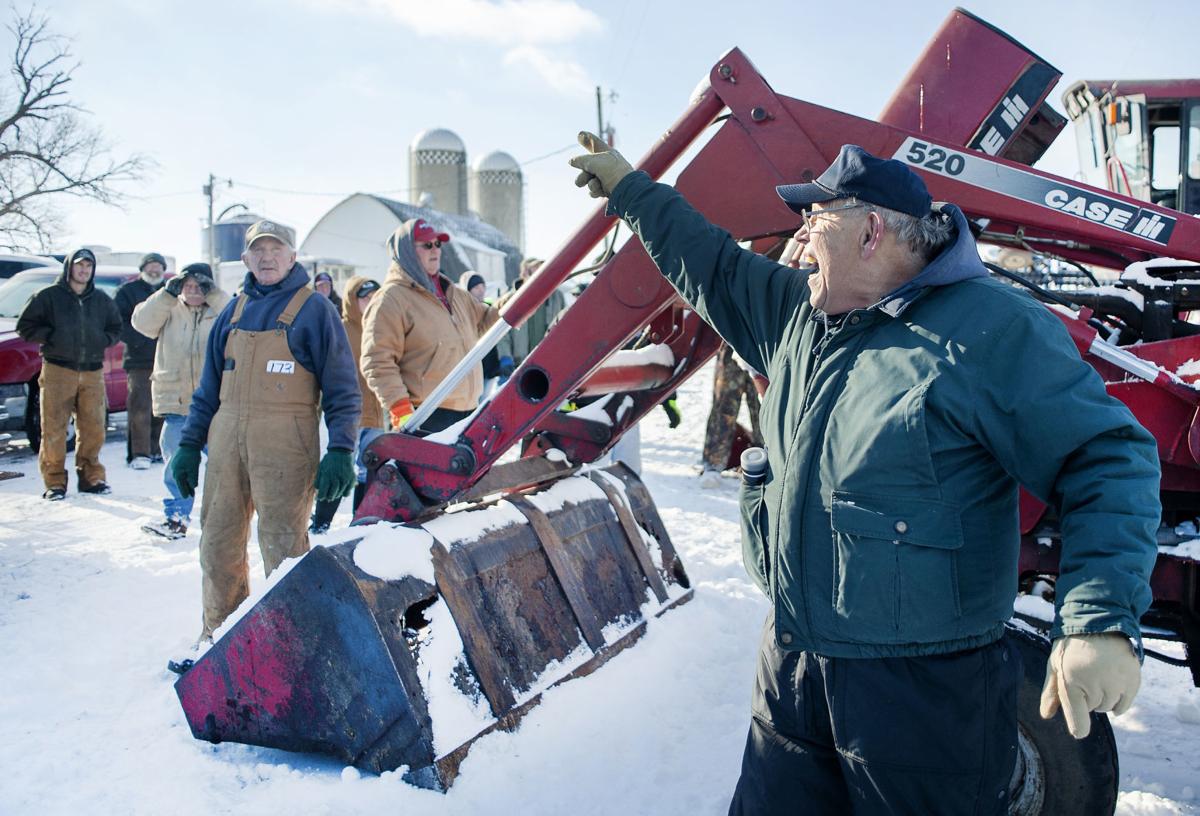 Gary Finley with Badger Auctions calls for bids on farm equipment Jan. 23 during an auction north of Orfordville. Auctions are becoming increasingly common on farms as businesses are forced to end operations. 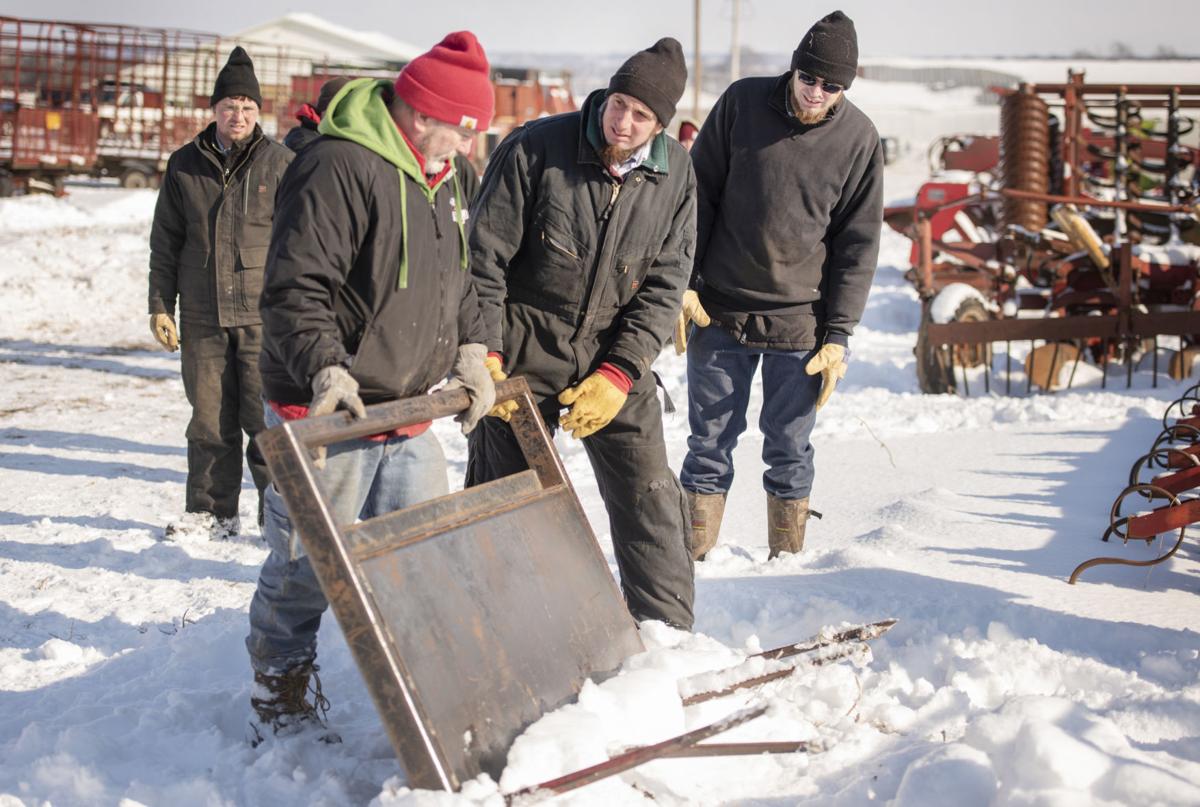 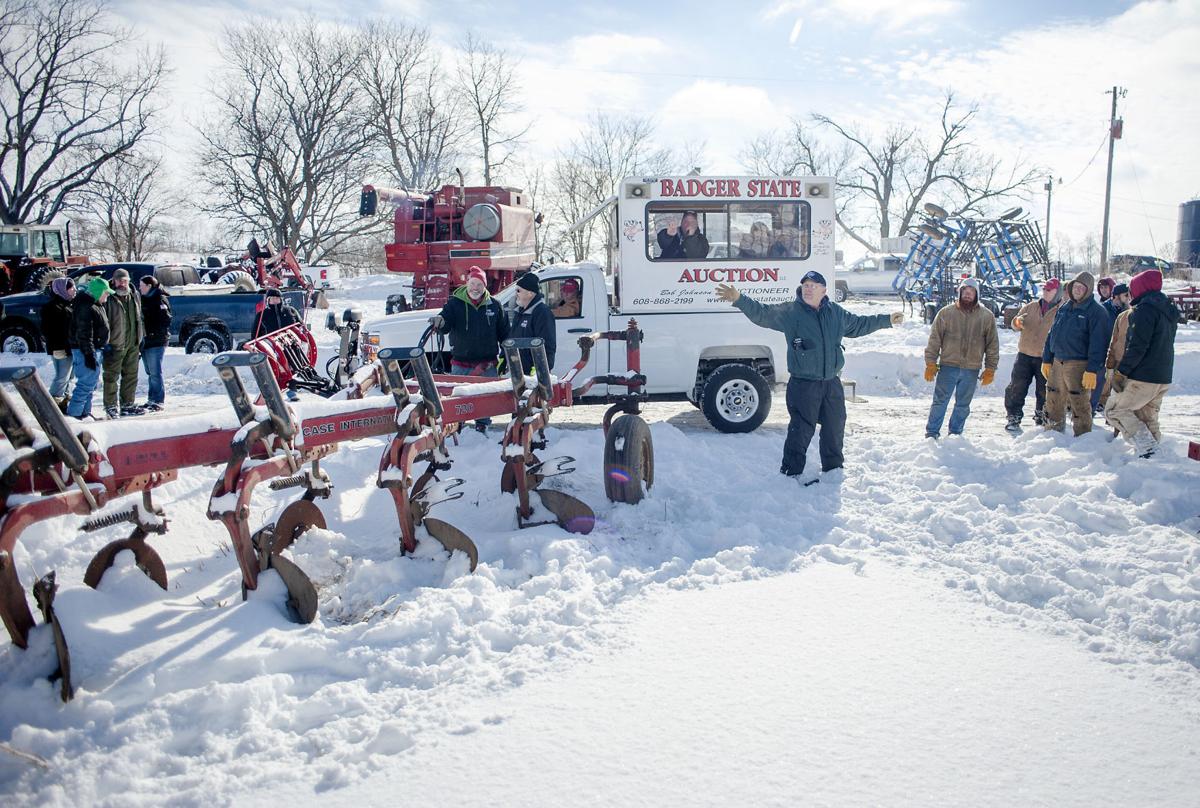 Gary Finley stands in front of the auctioneer’s truck as people make bids outside Orfordville. 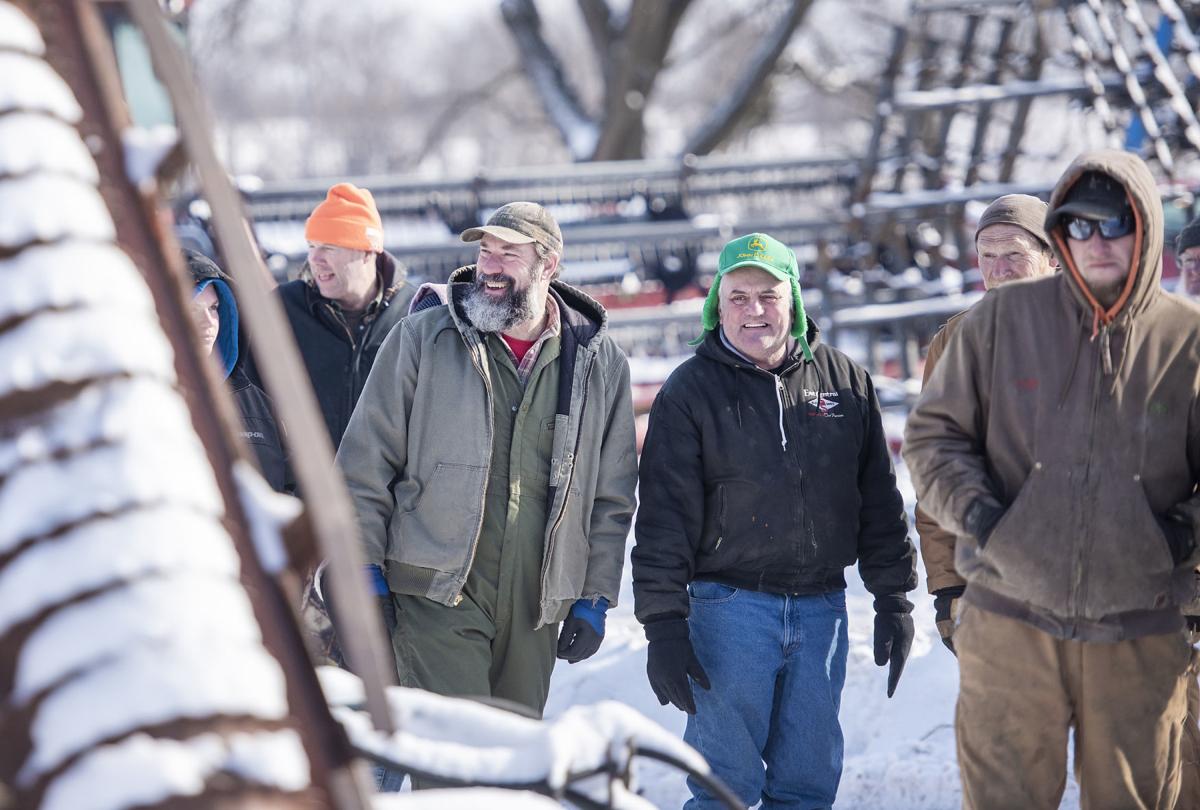 Auction attendees browse equipment during an auction Jan. 23 near Orfordville. 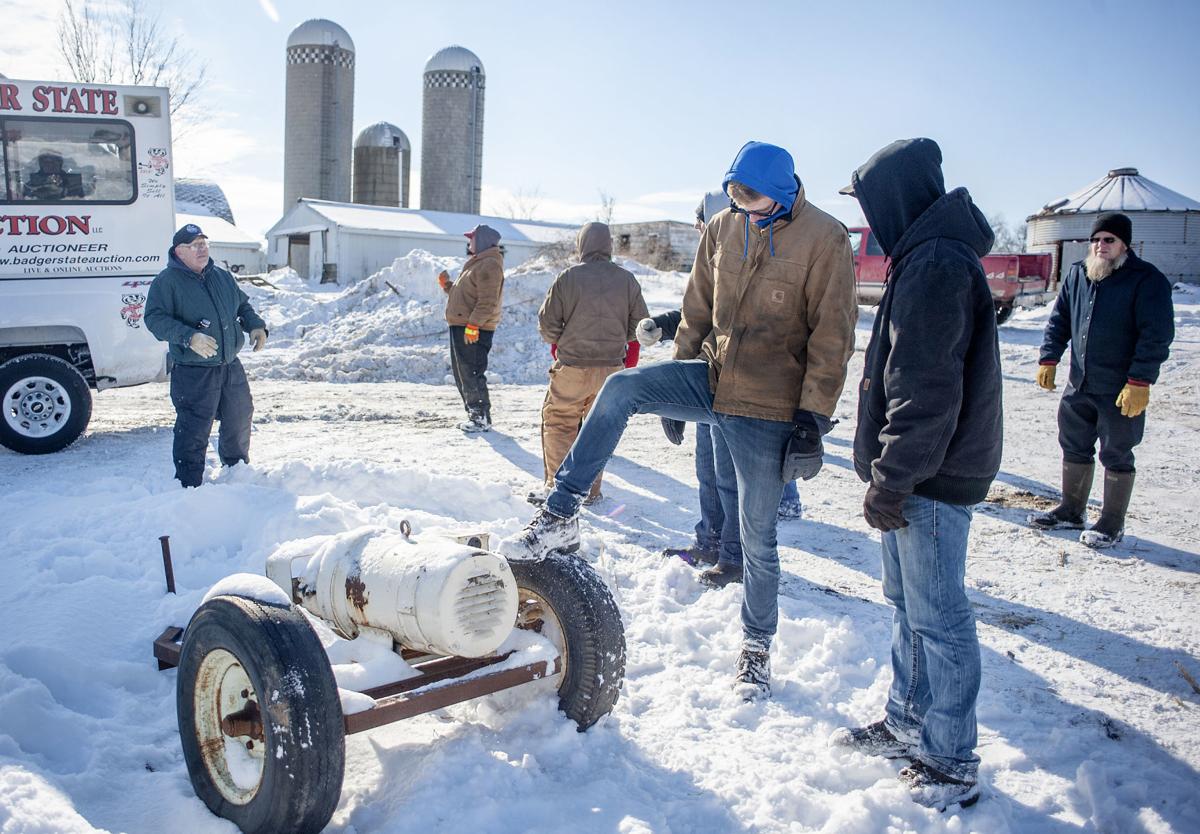 Auction attendees check out a generator during a farm auction Jan. 23 outside Orfordville. 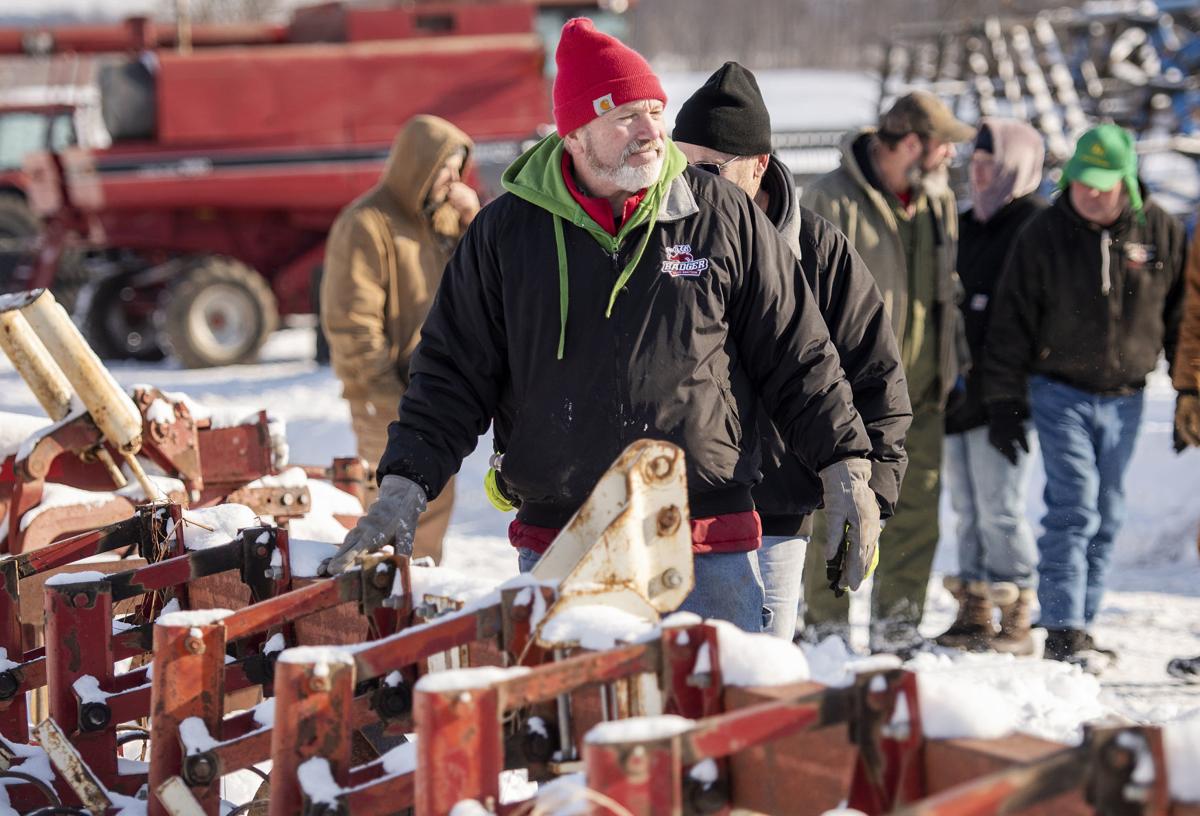 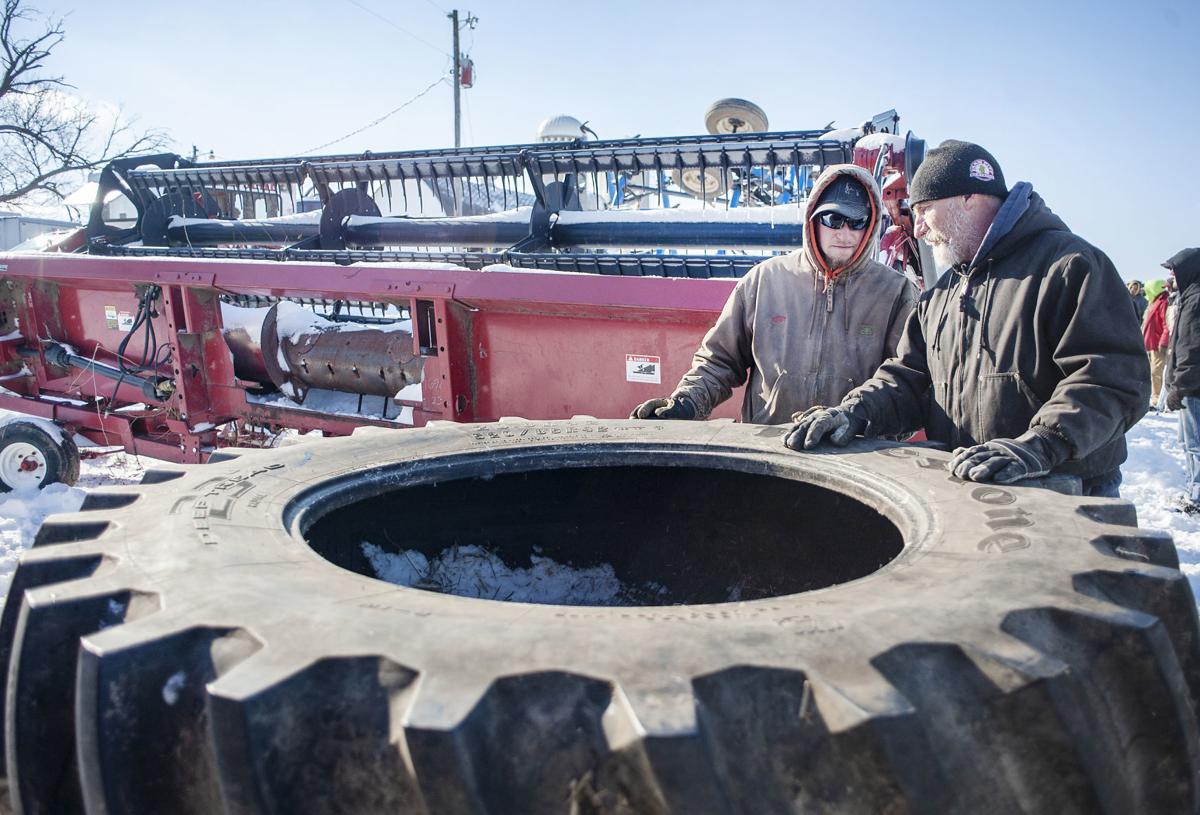 Blake Wittnebel, left, and his father, Tuffy Wittnebel, right, inspect a tractor tire during a farm auction in Brodhead on Jan. 23. 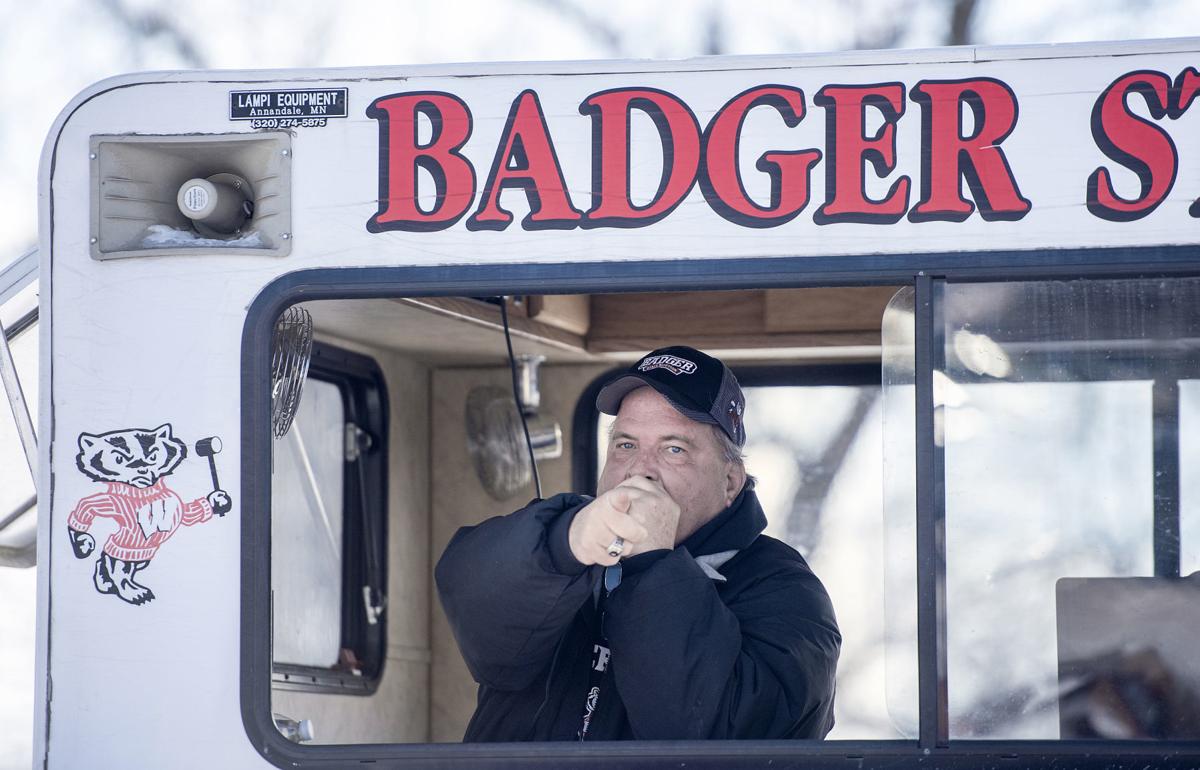 A Badger Auctions auctioneer points to bidders from a truck the company uses during farm auctions Jan. 23 outside Orfordville. 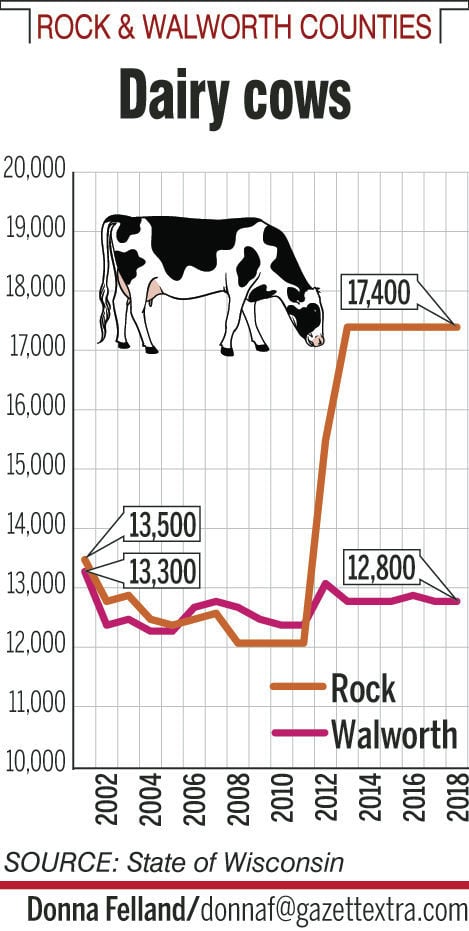 Dan Janes inside his shed filled with farm related memorabilia near in Evansville.

Blake Wittnebel, left, and his father, Tuffy Wittnebel, right, inspect a tractor tire during a farm auction in Brodhead on Jan. 23.

A Badger Auctions auctioneer points to bidders from a truck the company uses during farm auctions Jan. 23 outside Orfordville.

Rock and Walworth counties have lost dairy farms every year since at least 1975, and Dan Janes’ is among them.

Janes, 63, has lived his entire life on his farm along Cemetery Road just outside of Evansville. He remembers a time when four farms on the 1½-mile stretch of pavement milked cows.

Now, there are none.

Janes grows 500 acres of crops, hiring somebody else to do the planting and harvesting. He plans on selling his equipment in a few years.

It’s no secret agriculture is struggling, and dairies are bearing the heaviest burden. One state official said farmer stress levels are “at least as bad” as they were during the 1980s agriculture crisis.

When his wife’s in-home daycare is in session, Janes passes time in his shed, filled with memorabilia from national companies—Pepsi-Cola, Days Inn. Others are local—Case Feed, Avalon Farmers Supply.

He has collected most of these keepsakes at auctions over the past several years. What catches his eye?

“Things that look cool or remind me of my childhood,” he said.

Antique tools and appliances cover his tables. He points out a grease gun, a wagon brake and a three-in-one Maytag washing machine—it could do laundry, churn butter and grind meat, Janes said.

Not everything inside the shed is agricultural, but the farming influence is obvious. Many items are a nod to an era of farming that is gone and not returning.

Low prices and an oversupply of milk have caused hundreds of Wisconsin dairies to close, according to data from the state Department of Agriculture, Trade and Consumer Protection.

And it’s not just dairy farms. It’s hard to find a commodity that isn’t in a rut.

Some farms close because of tough financial conditions. Others have no successor. Land is absorbed by a neighbor farmer or sold for development.

Whatever the reason, when a farm vanishes, it means one more person leaving agricultural production and searching for career reinvention.

About 100 men, many clad in wool hats and brown Carhartt overalls, gathered on a sunny January day on a back road north of Orfordville. They were there to purchase the remnants of Steve Lund’s farm at auction.

Lund, 59, died in October of a medical condition. He had no children to take control.

Janes was there too, working a side job with Badger State Auction out of Milton.

Bob Johnson’s booming voice called out prices from a trailer. A truck towed him up and down the rows as he moved from item to item.

Johnson is the owner of Badger State Auction. He does a lot of farmland, estate and equipment sales, which typically attract farmers who want to expand or land investors who want to stockpile acreage.

Many of Johnson’s farm auctions either serve farmers leaving the industry or follow a death in the family, he said.

The Lund family auction was nothing out of the ordinary. Before his death, Steve was struggling to keep pace with changes in farming, health issues aside, said his sister Luann Varilek.

She didn’t think Steve ever would have left farming, though. Her brother worked in dairy, beef and crop production during nearly 40 years on his farm.

He stopped milking cows about a decade ago and started raising cattle. He co-owned the steers with his girlfriend, who brought them back to her own farm, Varilek said.

The family will keep the land because another brother, Greg Lund, has a small dairy across the road. Greg plans on using Steve’s fields to grow feed for his cows, he said.

Despite downturns in commodity prices, farmland remains a valuable asset. If a plot of land hits the market, it might be a neighboring farmer’s only chance to secure adjacent property, Johnson said.

The price tag of land is so high that it can often prevent younger farmers from starting their own operations. No one is making more land, causing a scramble among prospective buyers, Johnson said.

Not all property can withstand the pressures of development. In the ever-narrowing space between Milton and Janesville, farmland might be better suited for another use.

Mike Pierce recognizes that. The city of Milton annexed his property in 2012, and he has begun selling his inactive farmland. Part of it will be turned into Red Hawk Farms, a subdivision of single-family homes, and another portion could become multi-family housing complexes.

During Pierce’s career in farming, he transitioned from dairy to beef to just crops. The animals wore him out physically, he said.

Back problems and other ailments loomed over his last few years in farming. He considered sticking it out for a few more years but didn’t want to risk an accident, especially because he worked alone.

Pierce has a blended family, with one son of his own who preferred welding to farming. Like so many other farms with no clear successor, he figured his kids would have eventually sold the land anyway.

He declined to specify how much he sold his land for—“quite a bit”—but Pierce said he tried to keep his emotions out of his decision to sell. He nearly sold it 10 years ago, but then the recession hit.

The market could crash again. Why not sell while the price is high?

Pierce laments seeing the land developed and is adamant that he has always loved farming. But fields turning to homes was the future of Milton, he said.

He still rents some of his land to a friend, and he plans on helping him during planting and harvesting. That will satisfy his urge to stay involved.

“I think when it gets time to plant in the spring, I’ll start to get itchy. But as long as I can plant some with that other guy, that will be fine.”

Pierce has a logical next step for his retirement—full-time volunteer. He serves on boards for the Milton School District, Milton Historical Society and Milton Area Chamber of Commerce, among others.

He won’t have trouble keeping busy, he said.

Not every farmer is as fortunate.

For some, farming is all they know. Losing that can lead to anxiety, depression and suicide, said officials with the Wisconsin Farm Center.

Mike Lochner, an agricultural program specialist, said he once contacted local authorities to do a welfare check for one distressed client.

His colleague Tracy Brandel said the Farm Center tries to pay attention for signs of mental anguish when talking to farmers. A conversation with the Farm Center can sometimes be the first time farmers admit they can’t pay their bills, she said.

Brandel tries to listen and provide reassurance any time she visits someone’s home. If farmers can recover their feeling of self-worth, it’s a success story—even if they have to give up farming.

“A lot of times producers will say to us, ‘I feel like I failed. I’m a failure,’” she said. “What we try to say back to them is no, no one is a failure. You make the best decisions at that particular time in your business operation.

“That’s not failure. Unfortunately, this is life.”

Janes has an obvious connection to local history. His family founded Janesville nearly 200 years ago. He can also rattle off the town of Union’s agricultural history.

The town at one time had 50 dairies. Now, there are three. The town’s three feed mills are all long gone.

Many farms had their own seed companies and sold to neighbors. They’ve all been swallowed by large companies dedicated to seed production, he said.

Reflecting on the old days of farming makes Janes nostalgic. It’s why he has steadily built his collection of antiques.

The changes have come quickly. In 1981, the family built a stall barn for their cows. By 1998, that technology was obsolete, replaced by free-stall barns.

They stopped milking cows that year.

They transitioned to embryo transfer farming, which helps dairy farmers improve their herd genetics. After 20 years doing that, Janes stopped last year because nobody had the money to buy expensive calves.

Dairy closures have become a fixture in rural communities, but they have not been coupled with dairy cow losses. State data shows the number of dairy cows has mostly held steady locally, aside from a spike in Rock County when Rock Prairie Dairy opened a few years ago to milk 5,000 cows.

A stable number of cows, some enhanced genetically, are part of the dairy industry’s problem. Strategies such as embryo transfer ramped up milk production and caused a glut of supply, Janes said.

There are no obvious successors to Janes’ farm, although maybe his son-in-law could take over the land someday. He has no intention of letting the farm leave the family.

He wants to put the land into a trust so that it can’t be sold. If it’s sold and developed, it’s gone.

He has 65 acres within the Evansville city limits. About one-third of that eventually will be residential, but Janes will resist any attempt to develop the rest. The farmland is too good.

The good land will get farmed no matter how far prices fall. But scant incomes, long hours and expensive startup costs could cause the labor pool to evaporate, he said.

“Right now, I’m making enough off my crops to get me to retirement,” Janes said. “I’m just glad I’m not 30 years younger or I’d be out of the business.

“I think in 20 years, America is going to wake up and go, ‘Where did all the farmers go?’”