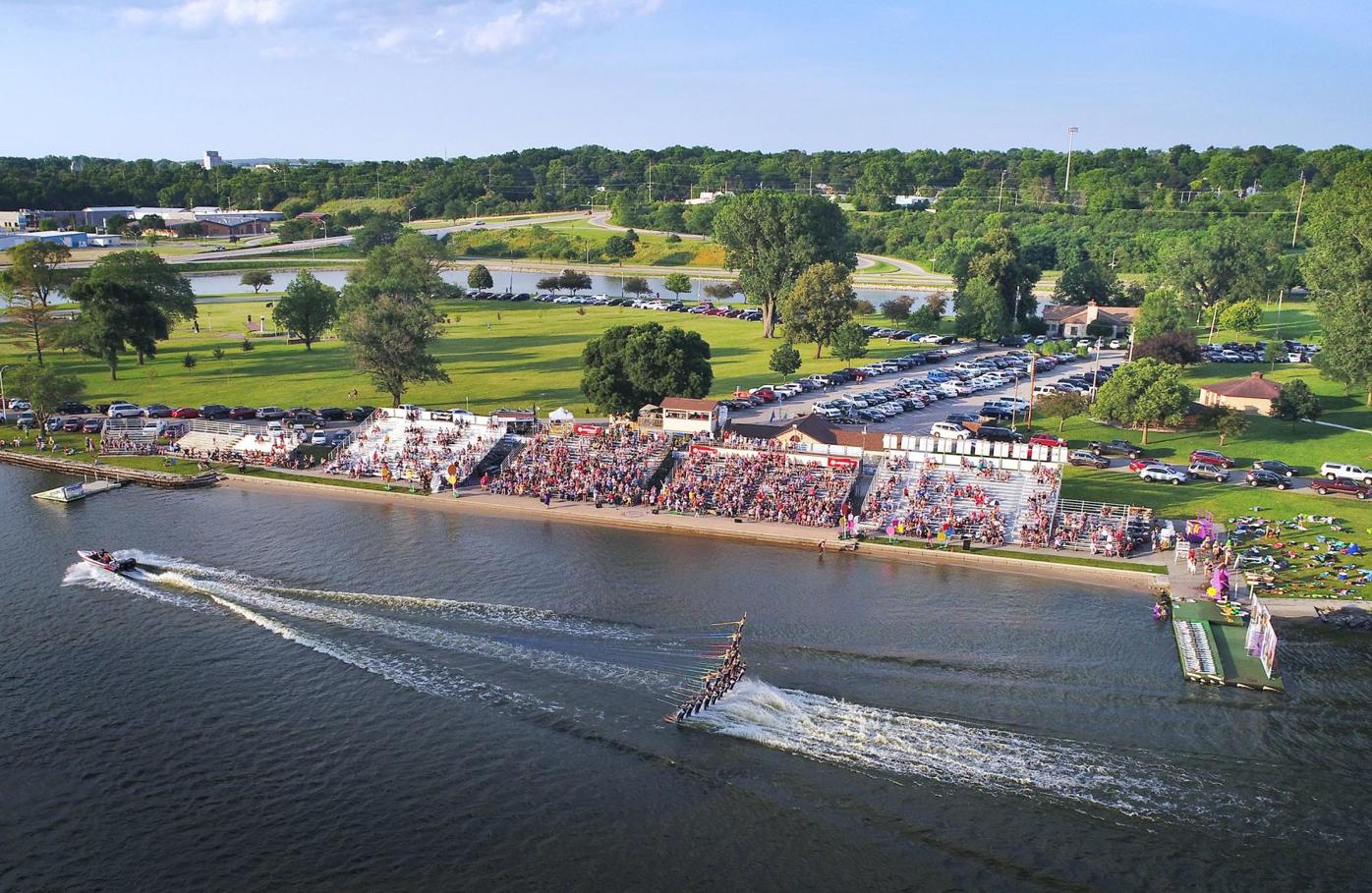 A crowd watches a Rock Aqua Jays performance in 2019. The multitime world champion show-ski team remains in limbo as to whether it will be allowed to have a 2020 season because of restrictions associated with the coronavirus pandemic. 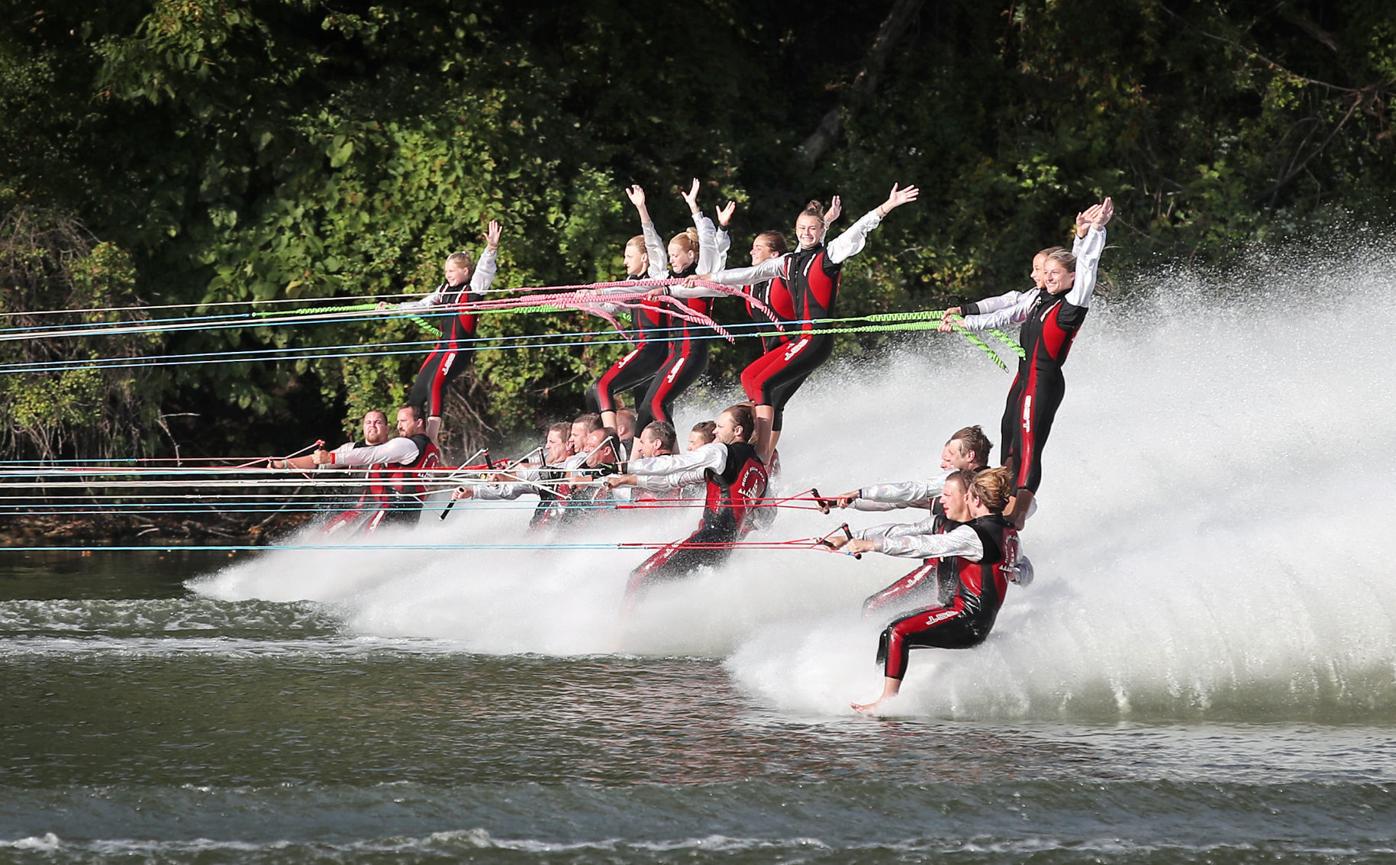 The Rock Aqua Jays smile while skiing down the Rock River in eight barefoot pyramids in their attempt to set a Guinness World Record at Traxler Park in Janesville in 2019. The team did not set the world record, but it did set a national record. 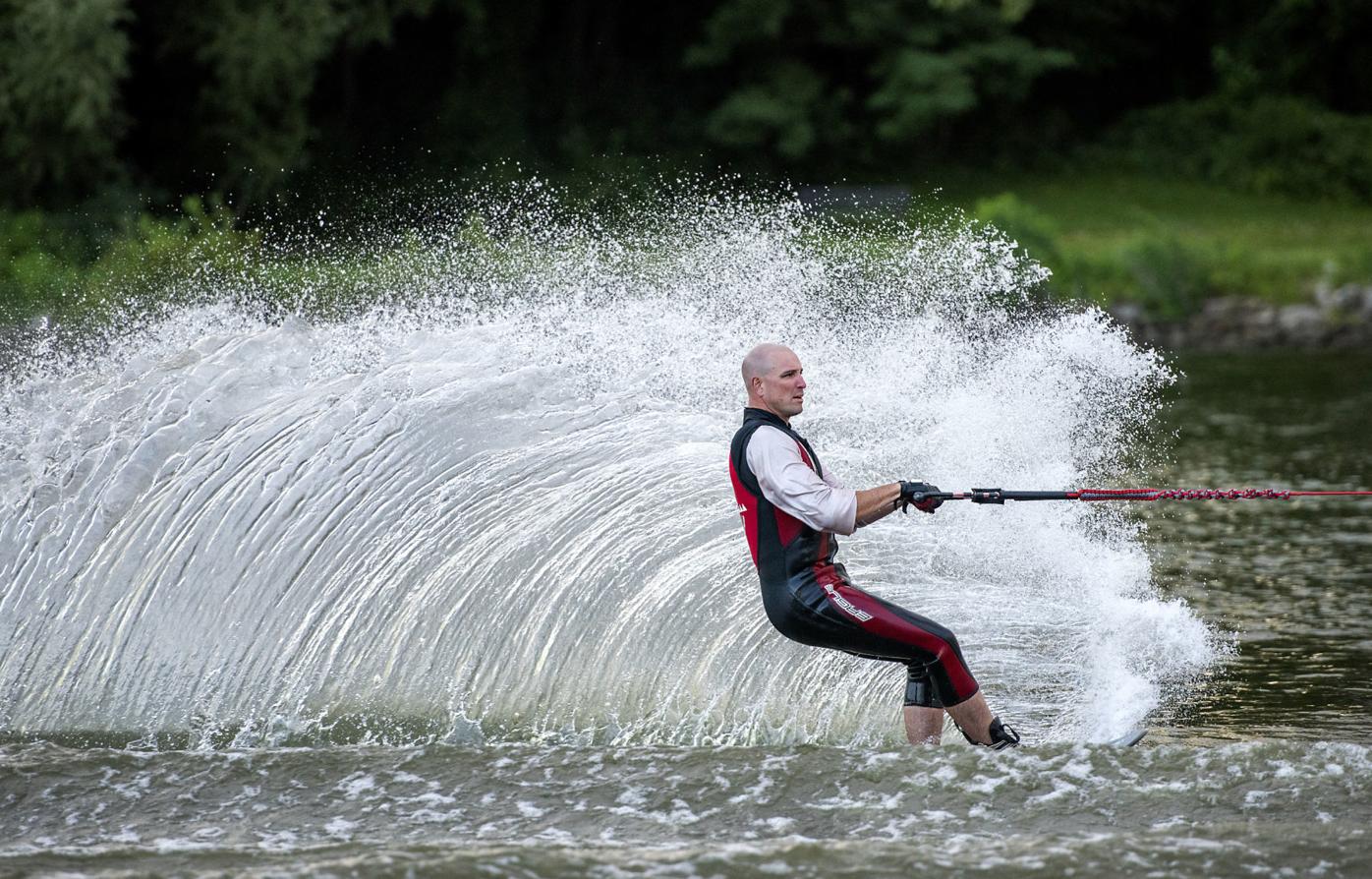 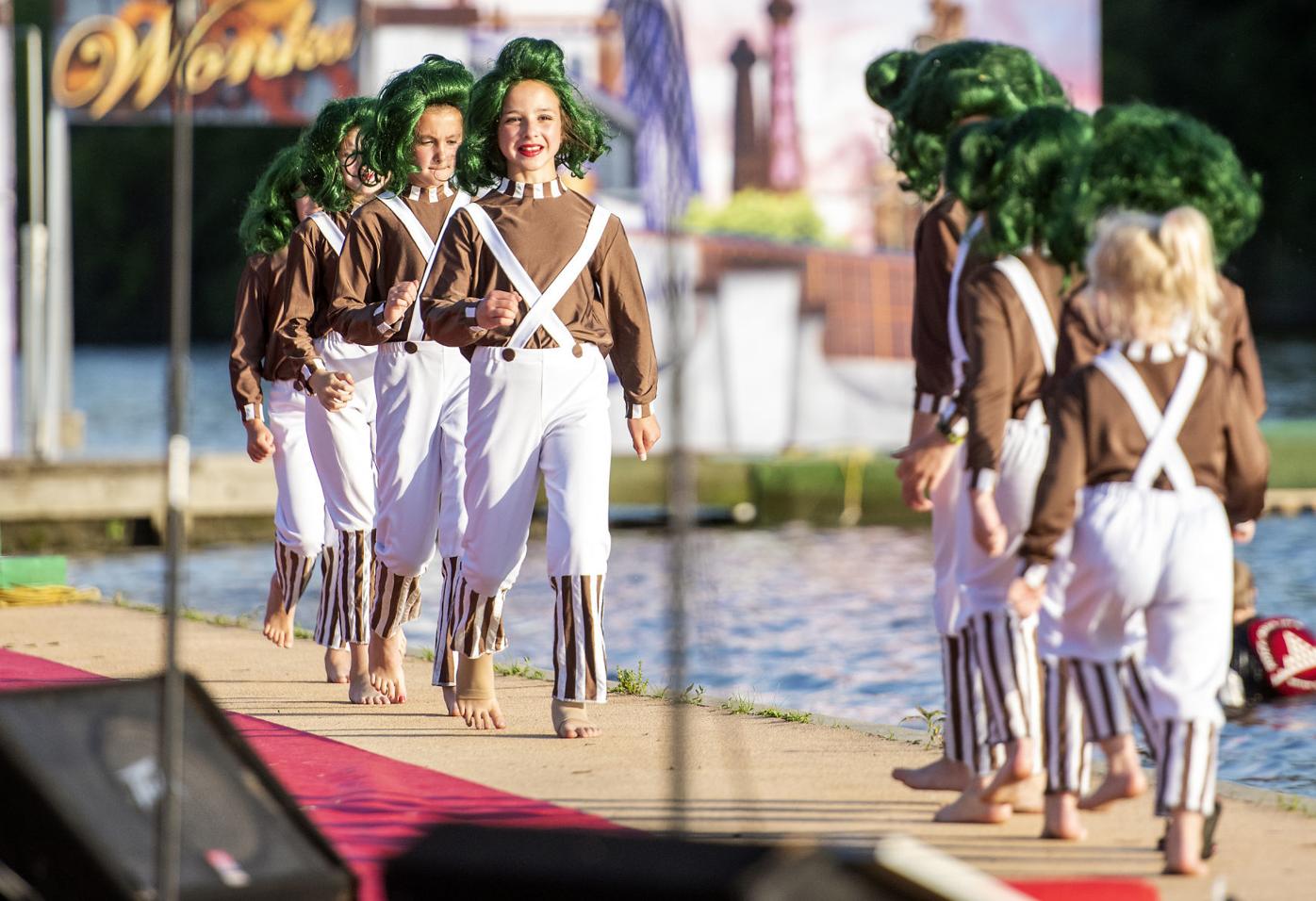 Children play Oompa Loompas from the film ‘Willy Wonka & The Chocolate Factory’ during a Rock Aqua Jays performance at Janesville’s Traxler Park in 2019. 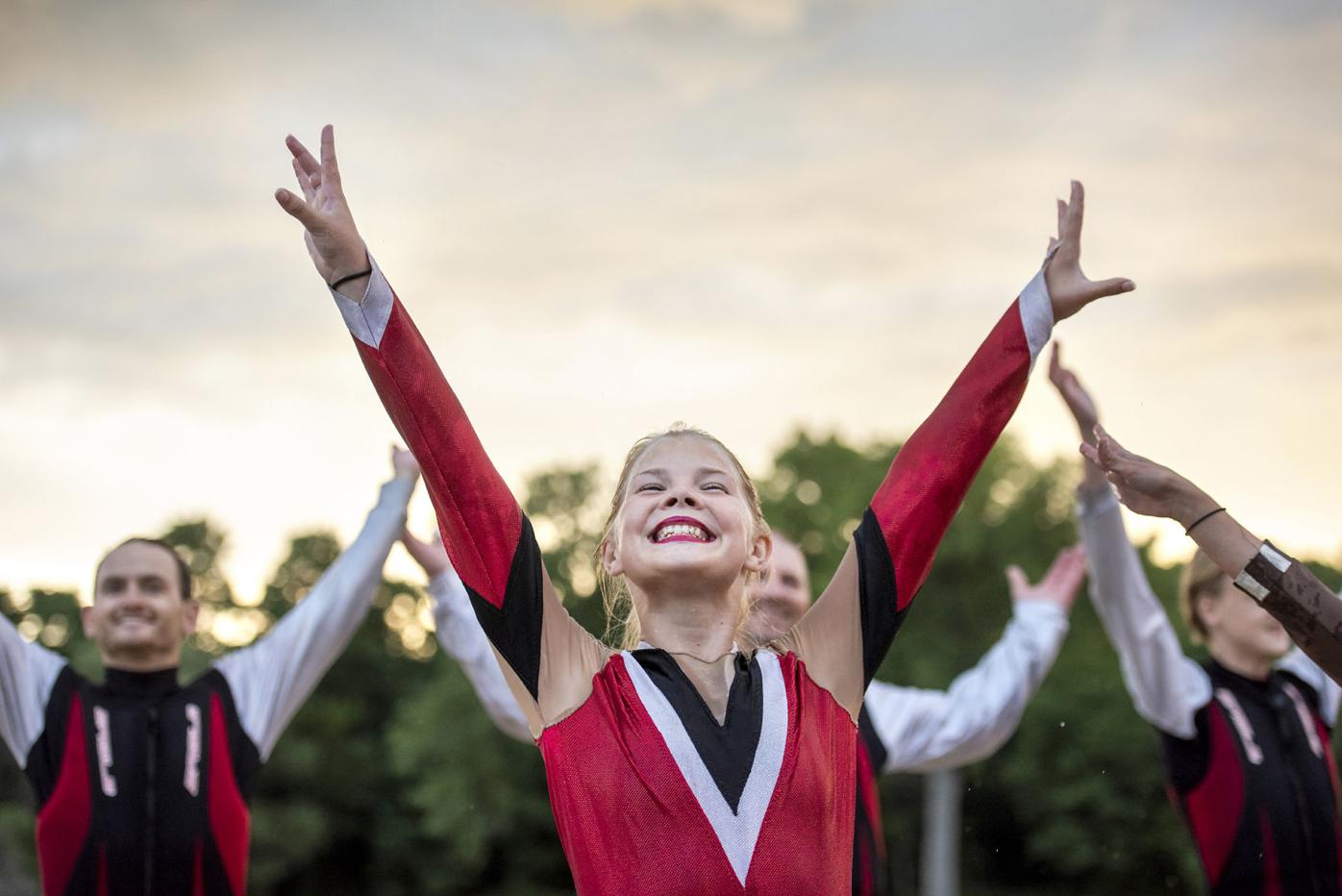 Cheyenne Shull, 13, smiles at the crowd after performing with the Rock Aqua Jays at Janesville’s Traxler Park in 2019. 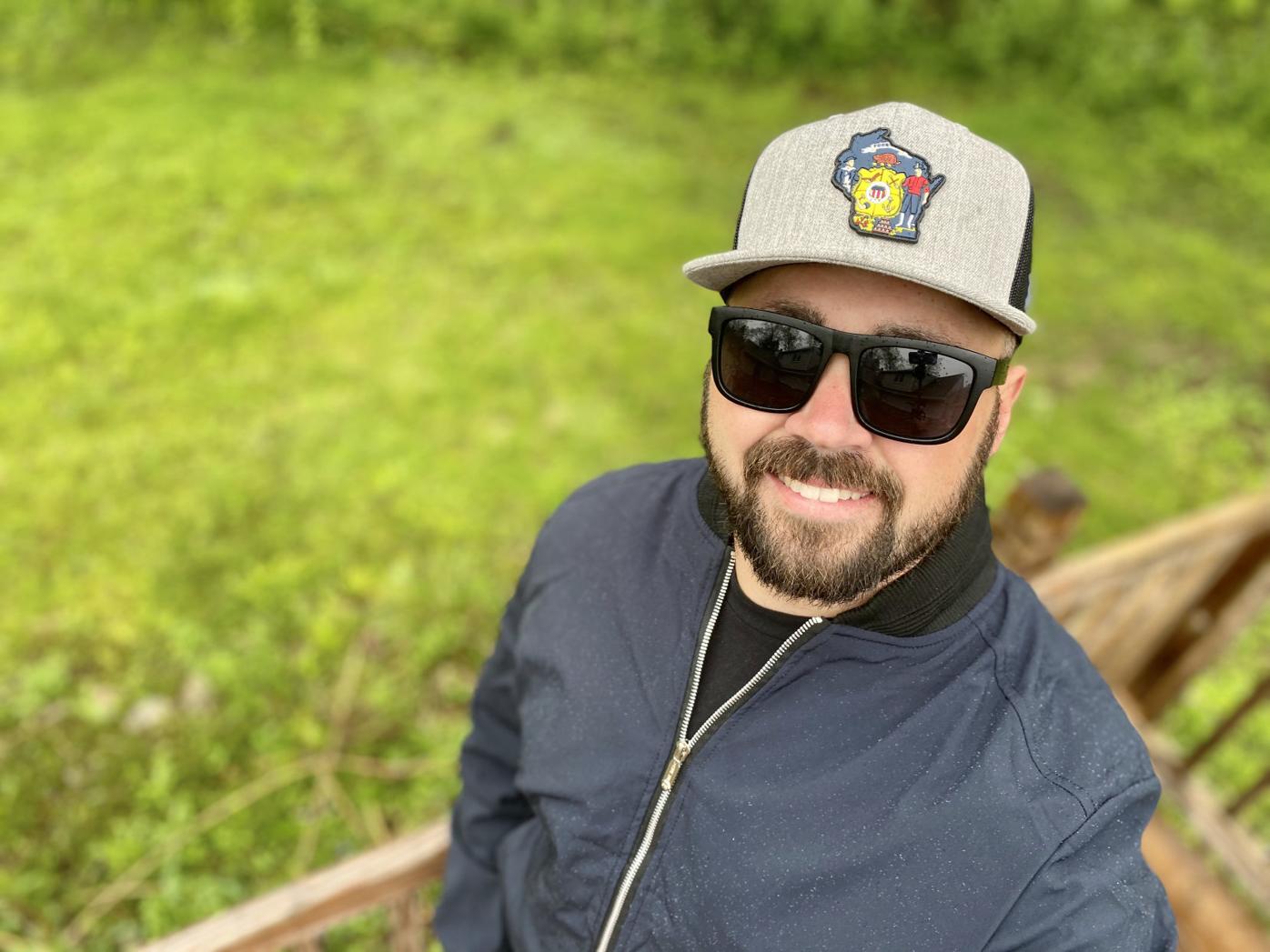 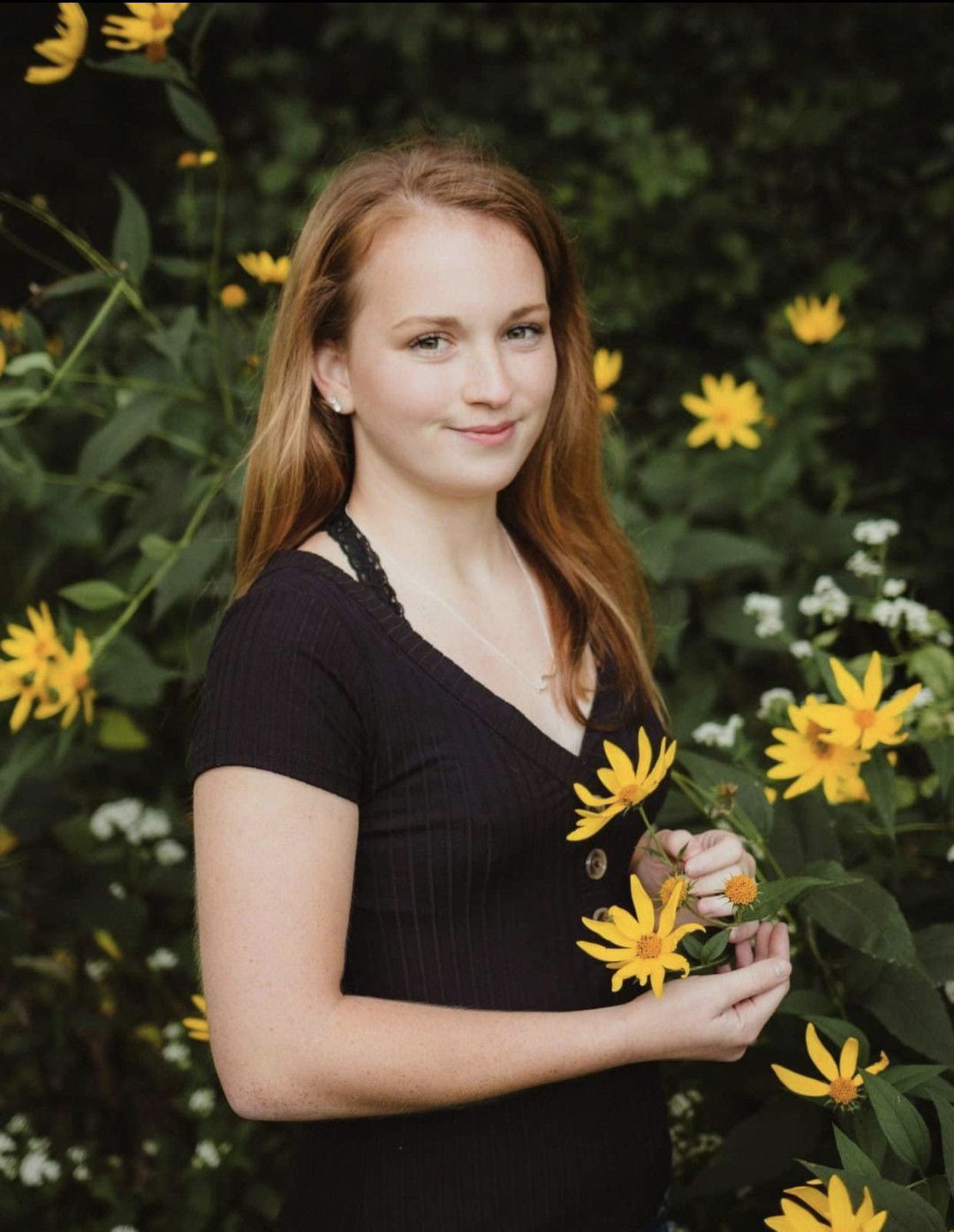 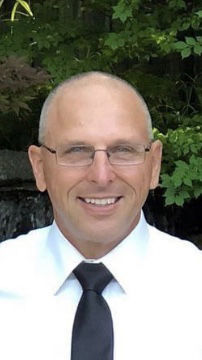 A crowd watches a Rock Aqua Jays performance in 2019. The multitime world champion show-ski team remains in limbo as to whether it will be allowed to have a 2020 season because of restrictions associated with the coronavirus pandemic.

The Rock Aqua Jays smile while skiing down the Rock River in eight barefoot pyramids in their attempt to set a Guinness World Record at Traxler Park in Janesville in 2019. The team did not set the world record, but it did set a national record.

Children play Oompa Loompas from the film ‘Willy Wonka & The Chocolate Factory’ during a Rock Aqua Jays performance at Janesville’s Traxler Park in 2019.

Cheyenne Shull, 13, smiles at the crowd after performing with the Rock Aqua Jays at Janesville’s Traxler Park in 2019.

For 22 years, summers on the water have been a way of life for Nick Dries.

An avid water-skier since age 9, the now-31-year-old can’t fathom the thought of not being dripping wet, sun-drenched and tuckered out regularly as a member of the Rock Aqua Jays show-ski team.

Like many others in this age of COVID-19, Dries is living in limbo. And as the world begins to emerge from seclusion caused by the global pandemic, Dries and his teammates find themselves in a situation similar to anyone else not classified as “essential.”

“As show-skiers, we set up our year around this three-month period,” Dries said. “We make a lot of decisions based on it, whether they are work-related, family-related or travel-related.

“Plus, I drive an hour and a half—one-way—four or five nights a week (for practice), so it would just be a lot removed from my life not to have it,” he added. “I wouldn’t even know what to do with a whole summer off. This is definitely not how you would like to be going into a season.”

In regular times, the Janesville-based, multitime world champion skiers would have introduced their elaborate show about a week ago to consistently large crowds at Traxler Park. This year, however, a simple start date—if there even ends up being one—remains undetermined.

“We have a fully developed show theme, characters, costumes, backdrops ... everything. The season is ready to go,” said Aqua Jays President Gus Rothmaler Sr. “It’s a matter of taking into account everybody’s safety due to COVID-19 and meeting social distancing requirements.”

Earlier this month, the state Supreme Court invalidated Gov. Tony Evers safer-at-home order that was set to expire May 26. And even though Rock County and the city of Janesville both have lifted their self-imposed safer-at-home orders, the first step of a phased reopening plan still is restrictive.

Under phase 1, most businesses or public spaces are allowed to reopen with 25% capacity limits and should practice physical distancing, implement protective measures and use best business practices. The limit on capacity alone would be a tough curveball for the fan-reliant Aqua Jays to hit.

“Since we depend heavily on audience participation and donations, without a crowd, that makes it difficult,” Rothmaler said. “That is our source of income. We have some savings, but that money purely is from donations from the public. We get no money from the city.

“We’re trying to preserve whatever money we have because, if we were literally allowed to put on shows without the public, it would wipe everything out.”

Despite his desire to hit the water, Dries understands the financial pitfalls.

“There is a financial fulcrum point where, if we can’t get enough people in the stands so we can collect donations or sell concessions or apparel ... it’s a gray area,” he said. “The ski team collects a small amount of dues from people, but that doesn’t cover all of our expenses.”

The Aqua Jays aren’t the only ones who stand to lose should the season be limited or scrapped. Based on numbers compiled in 2018, the Janesville Area Convention and Visitors Bureau estimates the local economy stands to lose about $1.3 million should the team remain in dry dock. And that number doesn’t take into account money the team spends with local vendors and suppliers for staples such as fuel, costume materials, lumber, paint, food, printing, technology, etc.

If there is a bright spot, it’s that USA Water Ski—the Rock Aqua Jays’ governing body—recently lifted its ban on skiing, per se. While that means skiers can at least work on personal development, it renders practicing multi-skier acts virtually impossible.

“In a nutshell, what this means for us is we are allowed to hold practices with one person skiing behind the boat at a time,” Rothmaler explained. “Starting June 1 or 2, we will start holding this type of practice. What we plan on doing is having up to four boats in three different spots on the river with no more than 10 in a group—so eight skiers, plus a driver and a spotter. If things change again and we can have more than 10, we can practice the big pyramids and things like that.”

Perhaps the most frustrating aspect of the current restrictions is the effect they are having on Rock Aqua Jays members and their fans.

“Mentally for people, outside of work, this is their life. This is what they live for in summer,” said 60-year-old Rothmaler, who still skis with the team alongside sons Gus Jr. and Bryan and daughter Bethany. “They want to do this every day from the time they leave work to when they go to bed.

“This is especially hard for the kids,” he added. “This is the highlight of their summer. We have some where this would have been their first season, and they are now in limbo.”

That group includes 17-year-old Jessica Richtmeyer of Milton. She and her brother, 13-year-old Braden Thostenson, were hoping to hit the water for their first season with the team in 2020.

“It’s definitely something I was looking forward to doing because my (high school) softball season got canceled, too,” Richtmeyer said. “With summer coming up, I’m trying to look ahead to the future. Hopefully, it (the virus) will be gone and we can get back on the water, and hopefully the season will be there.”

But even if Richtmeyer can’t join the Aqua Jays this season, she has a backup plan.

“Our family still has a wakeboard, and we still have a boat,” she said. “Worst case, I just get out there and do what I do. Just because one thing might be stopped doesn’t mean they all have to be.”