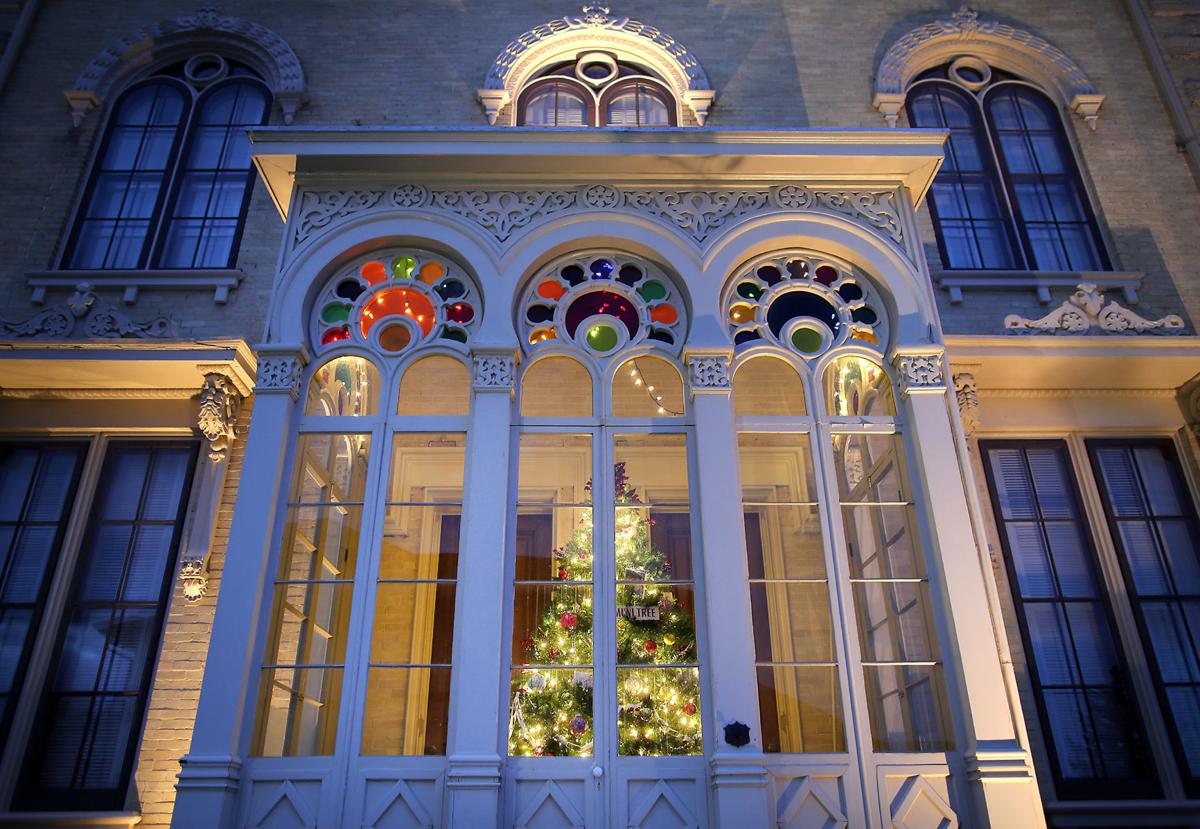 A tree decorated and sponsored by the Janesville Art League shines inside the Lincoln-Tallman House as their Holiday Tree Show has recently opened. 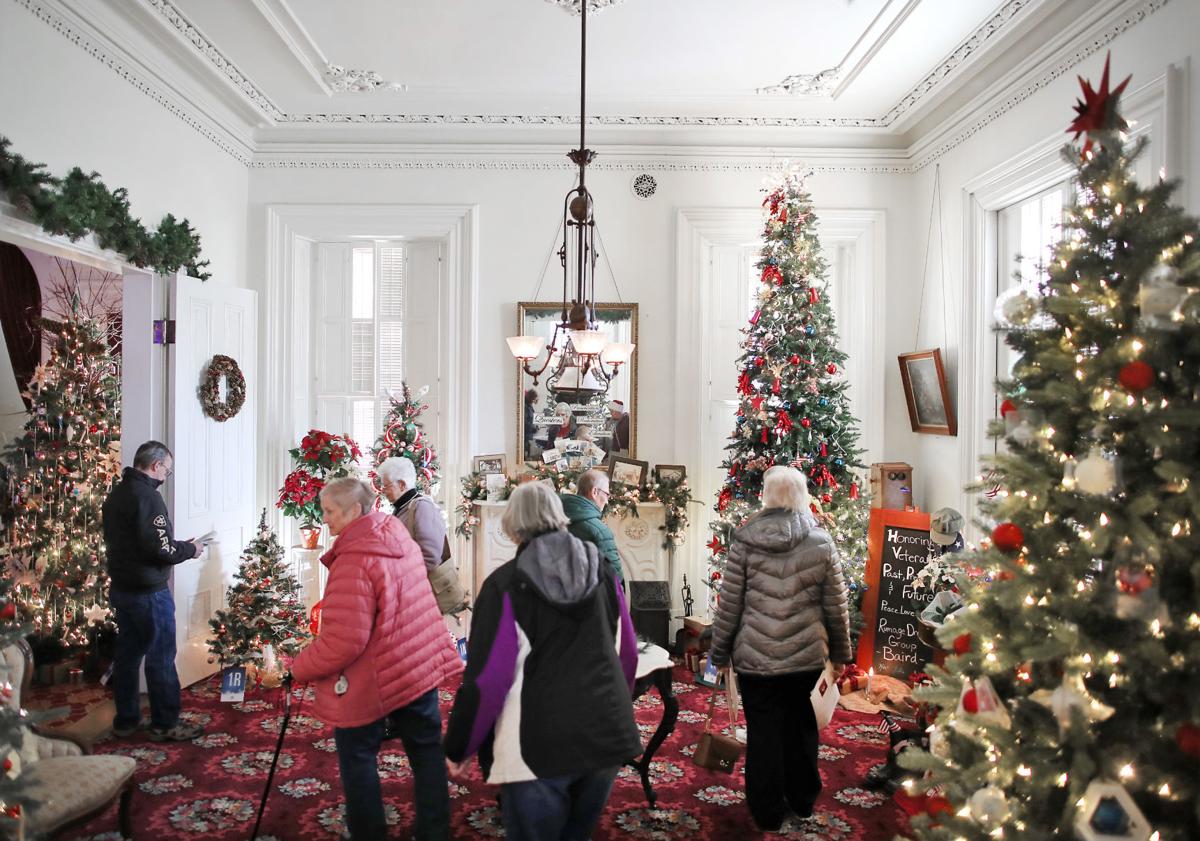 A tour group takes in the Holiday Tree Show at the Lincoln-Tallman House on Wednesday, Dec. 5. 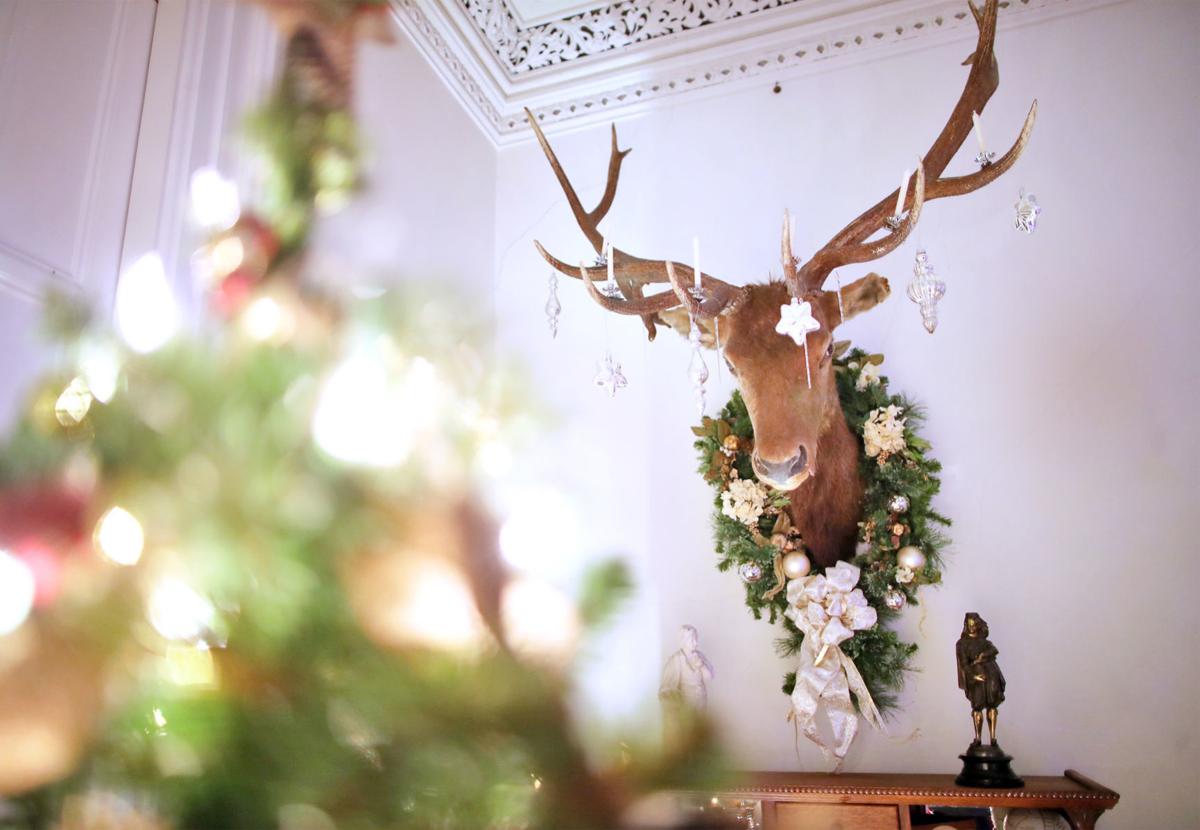 Ornaments hang from the antlers of a deer inside the Holiday Tree Show at the Lincoln-Tallman House. 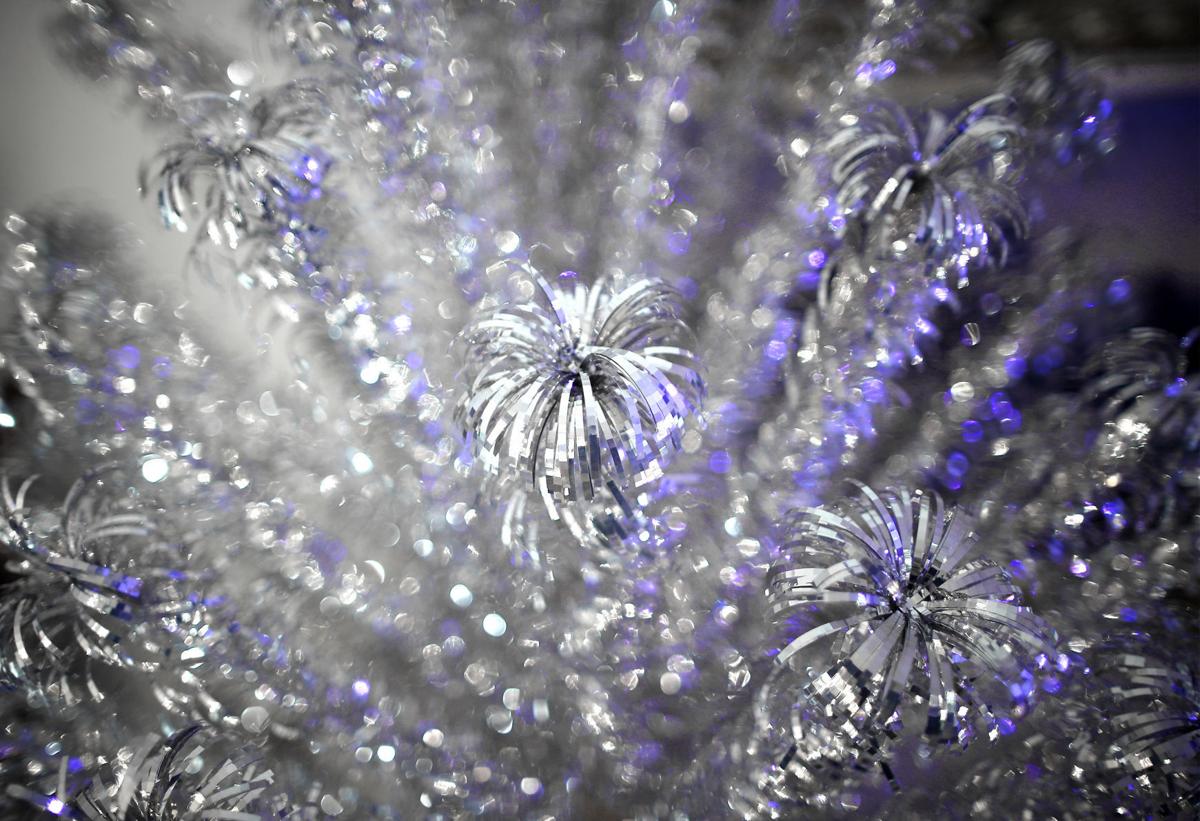 A closeup of a tinsel tree from the 1950's inside the Holiday Tree Show at the Lincoln-Tallman House.

There is a tree adorned entirely in fashionable women’s hats.

There is another that features photos of loved ones who have sadly passed on.

But for several ladies who visited the Lincoln-Tallman House for the Rock County Historical Society’s annual Holiday Tree Show recently, a definite favorite was the evergreen interpretation of the home’s original hosts, William and Emeline Tallman, that greeted them at the door.

“I’ve never seen anything like it,” one of the ladies said.

Attendees might find themselves uttering that phrase more than once as they wander through the city’s most celebrated residence this season.

Now in its fifth year, the show boasts a collection of more than 50 trees that are lit up and distinctively decorated by area sponsors.

“This is the biggest we’ve ever gone this year,” said Tim Maahs, RCHS executive director. “We’ve really kind of blown the doors off of it.”

A fundraiser for the historical society, the show features trees the group rents out—lights included—for between $50 and $250. Sponsors then put on their own personal touches.

The formula seems to be working. When it opened to the public the day after Thanksgiving, the show had more than twice the number of trees than the previous year. Fittingly, attendance mirrored the increase.

“In our first four hours Friday (Nov. 29), we exceeded our attendance for 2018,” Maahs said. “We’ve been selling tickets as far away as Wisconsin Rapids and Chicago already, and we had couple here from Indianapolis over the weekend. Word is getting out.”

Maahs credits a partnership with the hugely popular Rotary Gardens Holiday Light Show as a potential reason for heightened interest.

“That has really helped us forge our goals,” he said. “Last year, they (Rotary Gardens) had 58,000 people come through. We’re not going to draw those kinds of crowds, but if we were able to get even 10% of that, I think that would be amazing for us.”

While it might not match Rotary Gardens’ 750,000-light extravaganza, the tree show certainly offers its share of the twinkle-twinkle.

“With the tree in the parlor sponsored by Hendricks Development Corporation/CCI and ABC Supply, we thought we had that lit up,” Maahs said. “But I threw another 1,200 lights on that tree, and it just ate them up. I could have probably put another 1,200 on without any issues.”

The RCHS show also has that special magic that comes with being inside a historic home all spruced up for the season. For the first time, the house’s exterior is being illuminated by floodlights, and the four large pine trees out front will be lit up, as well.

But that’s just the beginning. Once visitors step inside, they are figuratively swallowed in festive cheer.

Along with the aforementioned faux Tallmans, the home’s foyer features lit and unlit garland atop the entrances to each adjoining room. Step into the drawing room and you will find not only whimsically decorated elk heads and a vintage cutter for selfies but also a “tinsel tree” owned by Tom Carlson of Fairview Floral in Janesville.

“He bought it on a trip to Chicago in 1958 and thought it would be the next big thing,” Maahs explained. “He brought a few back and put one in his showroom window, setting it up with a color wheel on it. It was causing traffic jams, so the sheriff called and asked what his hours were so they could help with patrols to keep traffic moving.”

Bought for $80 nearly 70 years ago, the aluminum tree is worth nearly 10 times as much today, Maahs said.

Next, follow the trail that winds through the parlor and library to see trees decorated by organizations such as Prent, VetsRoll and the Janesville Convention & Visitors Bureau. Then head upstairs, where more trees from the Janesville Jets, Studio 107, the Janesville Country Club and others glow softly in the home’s bedrooms, bathrooms and offices.

In one small room, a tree sponsored by the Schweigl family of Janesville features peacock-feather ornamentation. A handout explains it used to be included in the family’s Christmas collection, but “our two cats went into combat with the feathery decorations.” It now has a safe space where it can be shared, Maahs said.

To further enhance visitors’ experience and to allow for time to visit, rest or just take it all in, Maahs had almost all of the home’s original furnishings put in storage. Period furniture has been brought in as a replacement, and visitors are welcome to sit on any chairs or sofas provided.

Finally, for those who have visited during the day, Maahs suggests coming back in the evening—when the only interior lighting comes from trees and the home’s vintage gasoliers.

“It’s amazing to be in here at night,” he said. “Looking through different angles, you’re seeing layers of tree upon tree as you’re looking through the rooms. It’s really impressive.”

Tickets: Tickets purchased online at RCHS.us/event/holiday-tree-show/all can be used at any time the exhibit is open to the public. Tickets also are available at the door.

Organizers of the Rock County Historical Society's 2019 Holiday Tree Show could use your help.

Volunteers are needed to help with the show. There is no script to learn. The only requirement is bringing holiday cheer and a willingness to point out some favorites parts of the show to visitors.