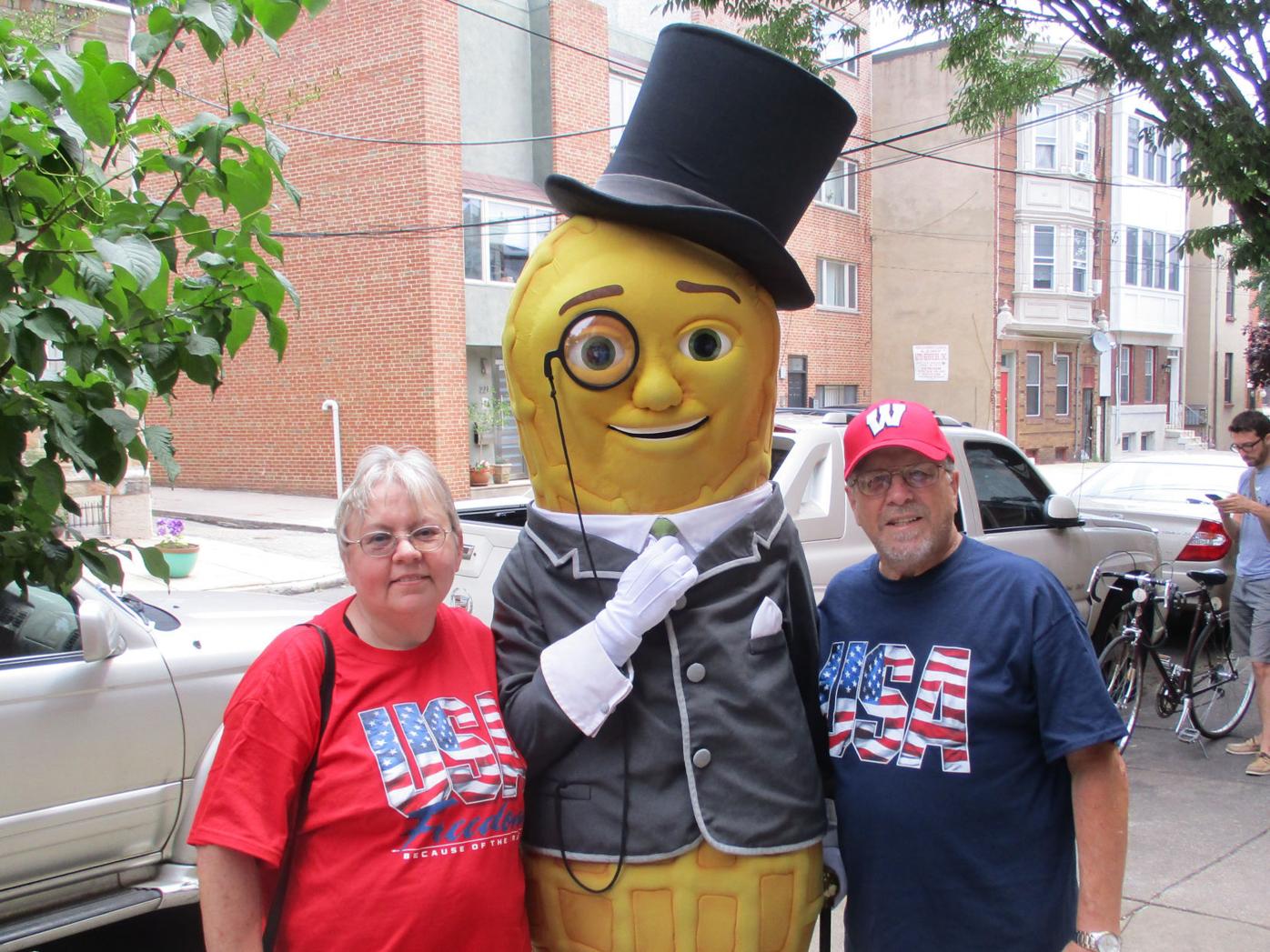 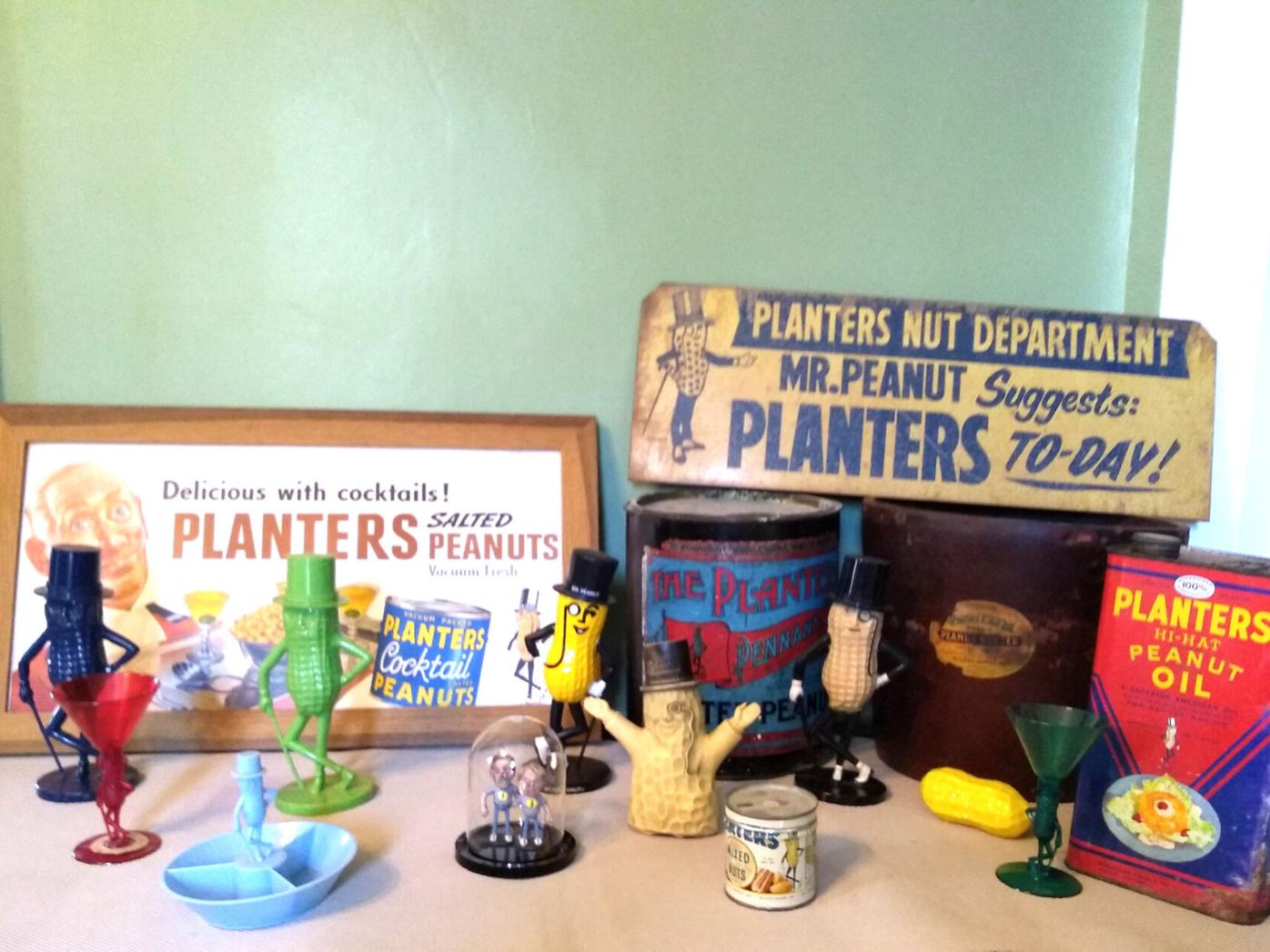 Several items from Bill and Kitty Person’s collection of Mr. Peanut and Planters brand memorabilia. Along with several signs and plastic banks, the couple also has items such as belt buckles, stir-stick containers and a pedal car.

Several items from Bill and Kitty Person’s collection of Mr. Peanut and Planters brand memorabilia. Along with several signs and plastic banks, the couple also has items such as belt buckles, stir-stick containers and a pedal car.

JANESVILLE—Bill Person doesn’t care if you think he’s nutty. In fact, he considers it a compliment.

For 30 years, Person and his wife, Kitty, have been active members of the Peanut Pals, a nationwide collective devoted to Mr. Peanut and other Planters snack memorabilia. Founded in 1978, the group has members in 38 U.S. states along with a lone member in Canada.

“We (he and Kitty) went to our first convention in Naperville, Illinois, in 1991,” Person explained. “About that time, she and I were talking about starting to collect something and didn’t know what to collect. When she was a kid, she had a plastic Mr. Peanut bank, so we thought, well, let’s collect that.”

The couple’s enthusiasm for the brand has since grown exponentially. Their Waterford residence doubles as a shrine to the highbrow legume, displaying such original pieces as plastic cars and trucks, belt buckles, pepper shakers, wind-up toys, posters, stir-stick holders and a pedal car, to name just a few.

“Our collection is probably a little larger than most,” Person said. “I would say we probably have a couple thousand items.”

Each year, Peanut Pals hosts national, Eastern and Midwest conventions. Since joining the club, the Persons have hosted Midwest gatherings in Lake Geneva, Brookfield and Kenosha.

On Friday and Saturday, April 23-24, the pair will add Janesville to the list when they lead the 2021 event at AmericInn, 3900 Milton Ave.

“Generally, when we have conventions, we have our home open to other club members,” Person said. “We are fairly familiar with Janesville. It’s within an hour of our house, and it gives club members an opportunity to visit a different area.”

The first day of the Janesville shindig will feature event registration and social events for club members only. The next day, doors open to the public for a swap meet and sale and for appearances by Mr. Peanut and the Peanutmobile.

“There are a lot of unusual things (at the swap meet),” Person said. “You find products that are from the ’20s, ’30s, ’40s and ’50s. With some of the items, club members want to keep them within the club because we are trying to keep them off of eBay. We’re not just buying stuff and selling it for a profit. We’re doing it to improve our collections.”

The public hours also provide the club with an opportunity to introduce potential members to their cause. Person said that at one time, Peanut Pals’ overall membership stood at more than 900 people. It now hovers around 400, with just four members from the Badger State.

“It’s all because of eBay,” Person said. “Right now, anybody can go on eBay and get just about anything they want. Years ago, if somebody wanted something different or something rare, they would go to the library, find a book with information on different clubs and go to conventions. That’s what we did for our Planters stuff.”

Turning to impersonal online marketplaces such as eBay also has led to an increased circulation of counterfeit collectibles, Person said.

“No one can really control it,” he said. “We call those items ‘fantasy items’ because you wish they existed but they really don’t. Somebody just comes up with something they think is neat and makes a bunch of them.”

Also challenging the club’s continued existence is a graying membership coupled with waning interest from a younger generation with little familiarity to iconic symbols such as Mr. Peanut.

“Right now, we might have 10 or 12 members who are in their 40s; otherwise 80% of our club is 50 and older,” Person said. “Maybe it’s because all of these mascots are tied to older generations. I don’t think younger people are interested in things from the ’20s and ’30s. They’re more interested in health food, Marvel movies and things like that.”

Along with entry into conventions, paying members receive a quarterly newsletter and admission to special auctions, lunches and business meetings held during conventions.

For Person, the most valuable benefit comes through the friendships he has formed with fellow collectors.

“It’s the camaraderie with the other club members,” he said. “It’s in talking with them and seeing what they’ve found.”

When: Friday-Saturday, April 23-24. Members-only events are planned Friday and Saturday afternoon. The public is welcome for a swap meet and sale from 9:30-11:30 a.m. Saturday.