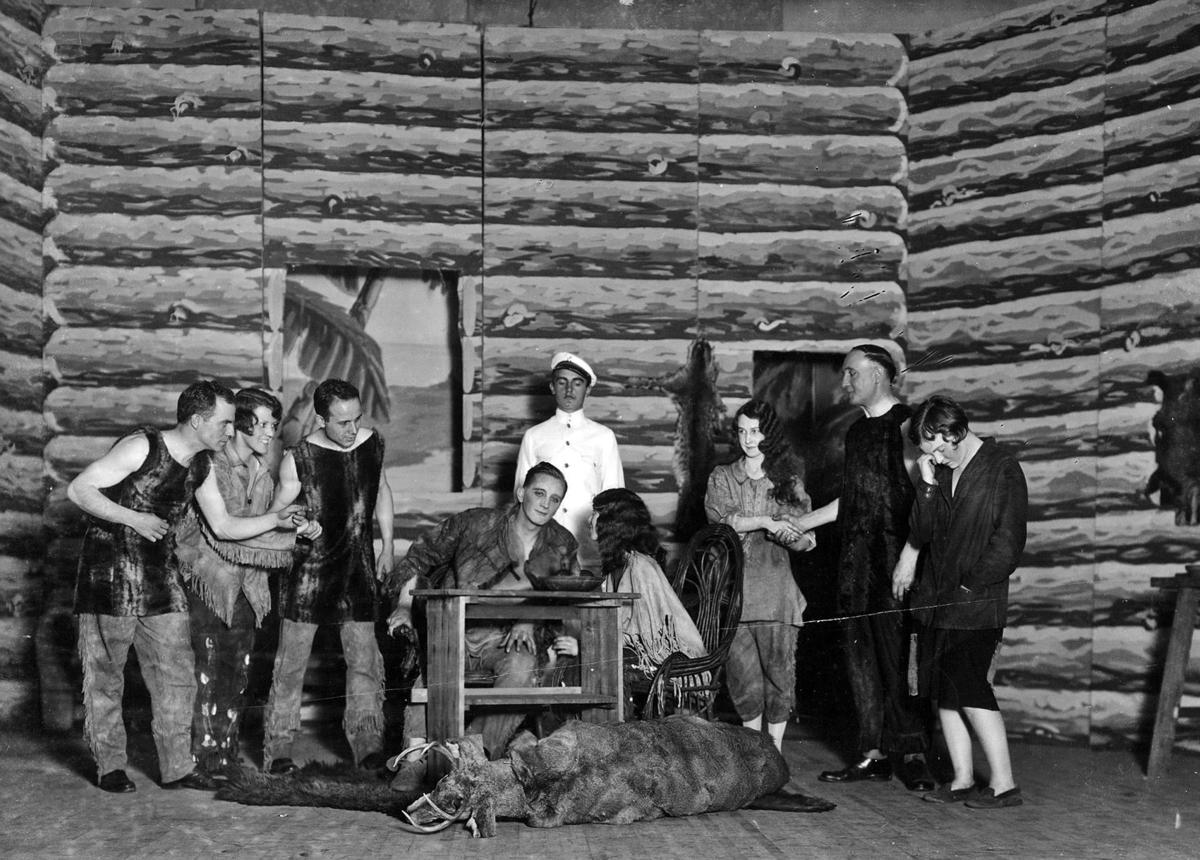 Janesville Little Theatre’s production of ‘The Admirable Crichton’ performed in 1930.

Members of Janesville Little Theatre present their production of ‘Ladies of the Jury’ during the group’s 1938-39 season. 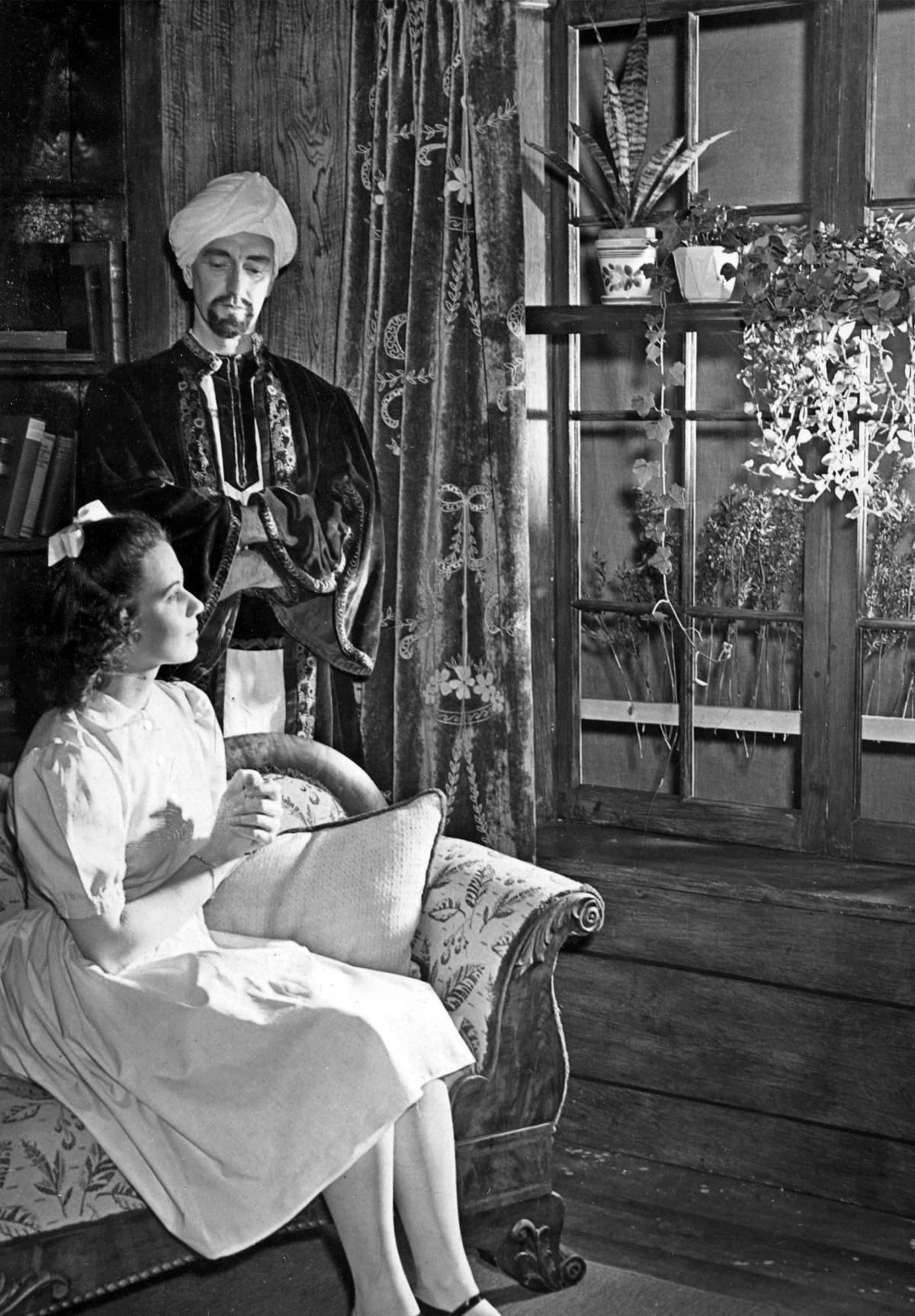 Janesville Little Theatre’s production of ‘The Servant in the House’ performed in its 1939-40 season. Rachel Wise and Dr. Stuart Richards reenact a scene from the production.

Janesville Little Theatre’s production of ‘The Admirable Crichton’ performed in 1930.

Members of Janesville Little Theatre present their production of ‘Ladies of the Jury’ during the group’s 1938-39 season.

Janesville Little Theatre’s production of ‘The Servant in the House’ performed in its 1939-40 season. Rachel Wise and Dr. Stuart Richards reenact a scene from the production.

JANESVILLE—Elsie Van Tassell recalls being the first woman to direct a theater show in Janesville.

Van Tassell had been involved with Janesville Little Theatre since she and her husband moved here in 1947, and women had been a part of the theater group since it was founded in 1929. Some even wrote plays for the group.

But Van Tassell was the first woman to direct a show here.

She had taken courses at the famed Guthrie Theater in Minneapolis and elsewhere, so she knew a thing or two. But it took the director getting sick to give her the opportunity, she recalled.

The ailing director asked her to step in, and she never stepped back, going on to direct a play every year until 2015.

“I was able to do all the little things I had wanted to do in theater,” she said in a recent interview at St. Elizabeth Manor in Footville.

“She was a wonderful director and a wonderful actress,” said another JLT stalwart, Gene Bostian. “I had the privilege of being in several plays with her.”

Van Tassell’s contributions were extensive, but she was one of many who gave so many of their nights to entertain their fellow Janesvillians over the course of JLT’s 90-year history, which the group is celebrating this year.

The celebrating begins with a birthday party Wednesday, Oct. 16, at the Janesville Performing Arts Center. The first show of the anniversary season, “On Golden Pond,” opens Friday, Oct. 25.

JLT is the longest-running, uninterrupted local theater group in the state, and it is said to be the third such theater group nationwide. Many dropped out of the running when they suspended shows for World War II.

“JLT has never gone dark,” board President Jim Thomas said proudly. (People might remember Thomas in the titular role of “Lombardi” in 2016.)

Thomas is hoping to keep the group going at least until its centennial, but it has been difficult in recent years, in contrast to the days when it was a major part of local culture.

Van Tassell can remember the days when JLT thrived as the only theater group in town. Now the city boasts several others, and local residents have a world of entertainment available at their fingertips.

“When they started, there was no TV,” Thomas noted. “There were movie houses, but it still boggles my mind that at one time, they had 1,500 season ticket-holders.”

“We are, quite honestly, on a shoestring right now,” he said.

JLT’s biggest expense these days is payments on a loan for a roof at its headquarters, the former fire station at 906 W. Racine St. That bill should be paid off next year, Thomas said, but utilities and other ongoing costs can strain finances.

But like a theater troupe that makes sure the show goes on, JLT perseveres.

“I don’t think we mean as much to the community as we did years ago, but we still feel we have a purpose, and we’re proud of the fact we’ve been around for so many years,” Bostian said.

Struggling to fill seats is not uncommon for amateur theater groups. JLT’s board strives for a balance between mounting popular shows that might fill seats and shows that break new ground but won’t draw audiences, Thomas said.

Thomas heard that at one time, JLT officials would travel to New York to negotiate performance fees.

Van Tassell’s daughter, Jeanene Welker, has been involved in JLT since she was 6 years old and is a lifetime board member.

She remembers her first show, “The Teahouse of the August Moon,” in 1961. She was one of the village children in American-occupied Okinawa, Japan, after WWII.

“I sat on the back of a jeep with a goat, a live goat,” she recalled.

“It was a good way to meet people,” Welker said. “I met my husband there.”

Her husband is Jim Welker, another longtime JLT actor and director whose day job was as a Rock County Court judge.

Van Tassell found joy throughout her life in acting, directing and backstage work with Janesville Little Theatre. She was one of many to feel the joys of becoming close with a group of people as it strived to create a work of art on stage.

“It takes lot of commitment to be down there, probably four nights a week for two months,” Bostian said. “You bond with people. It’s just a wonderful experience. I would encourage people who have thoughts that maybe they wanted to try this to come down for trials, and who knows? You might have a great time and contribute to it also.”

“Plays ... they’re wonderful things,” Van Tassell mused. “Sometimes, don’t you get carried away by the words the actors say? They stay with you forever.”

Where: All performances at Janesville Performing Arts Center’s Gallery Theatre.

Tickets: $16 for adults, $8 for students and free to those younger than 12. Call 608-758-0297 or visit JanesvilleLittleTheatre.org and click on “shows” to find the online purchasing link.

Spring 1930: The first show, “The New Lady Bantock,” a comedy that opened on Broadway in 1909, opens on a Janesville High School stage that is only 7 years old. That stage is now part of the Janesville Performing Arts Center, where JLT now performs after decades of absence.

1931: JLT begins a tradition of free performances for the ill and elderly, at Pinehurst Sanitarium.

1947: Kerwin Mathews appears in “The Hasty Heart.” Mathews, who grew up in Janesville, went on to a number of Hollywood roles, including “The Seventh Voyage of Sinbad.”

1964: “Rain” won a first prize in a Wisconsin Idea Theatre contest and went on the road to Rhinelander.

1976: JLT’s first dinner theater performance, “You Know I Can’t Hear You When the Water’s Running,” at the Hoffman House.